Well, seeing as we all have time on our hands these days… I decided to revisit a project I started about a year ago, and then completely forgot about!

My Sersa Work Car build is stalling out due to a lack of parts to finish the build, so I went looking for another project this past weekend. After a few false starts, I found a baggie of bits I had begun assembling to replace a part of the KISS Gem 4/4 I purchased last year!

So for those not familiar, the RhB has a pair of dual power engines used primarily (now) in maintenance service - 801 and 802. They can run both on overhead centenary or on internal diesel power. Initially delivered with older 60s/70s styling, they each went through a modernization/rehab a while back and emerged with square headlamps, upgraded cabling/connections, etc.

When KISS offered these models, there was a choice of original or modernized versions. The frustrating thing was that while the “faces” of the locomotives varied between models, along the lower center frame, the undercarriage was not altered and thus the “modern” version of the locomotives had older details - particularly the air intake/tank/control cabinets at on one side.

You can see these more modern details in these photos from Haribu.com and Luc Wullschlenger. And here on the KISS model, you can see the older tank. 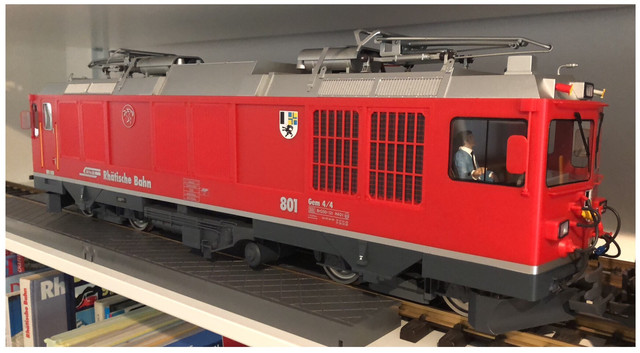 Trying not to think about the consequences of making a mistake with my Xacto saw on the KISS engine, I crossed my fingers and jumped in!

To start, I removed the centre engine under frame details. This was fairly easy, four screws and then demounting the locomotive’s internal PCB that is mounted to the inside of the part. 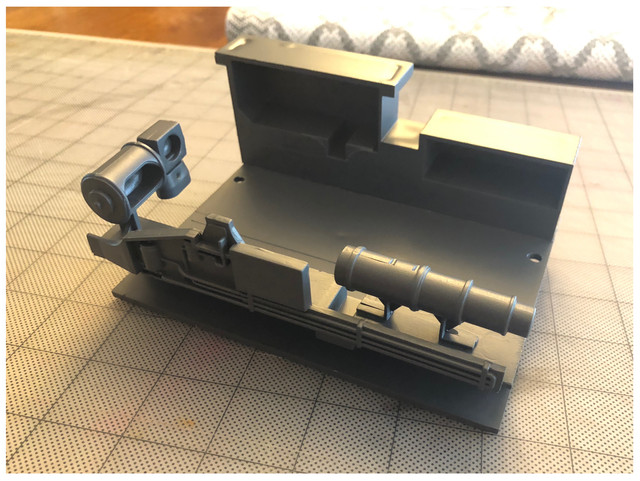 With access, I then carefully sawed off the offending older part. Once off, I used a sanding stick to sand down the surface flush. 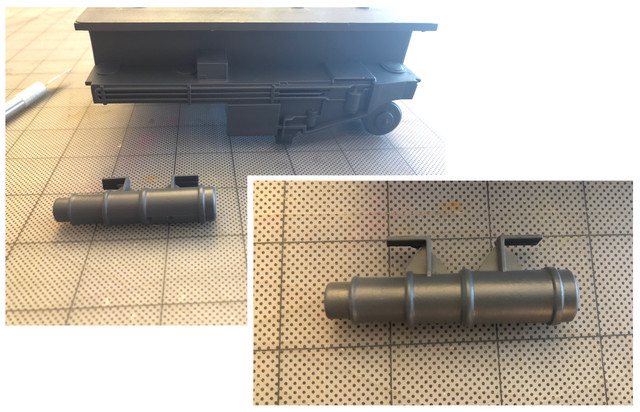 With parts removed, it was now time to rebuild, better than before!

I started by scrounging through my greebles bin and pulled out a spare LGB battery box from a DR passenger car. I also pulled the air tanks and chimney pieces from an old MDC hustler kit.

I drilled the batter box to accept the chimney (cut into halves). From here, the concept is to insert the chimney on either side and use it as an interior diameter guide to mount the air tanks to on either side of the enclosure. At the leading end, I’ll also mount a small fan detail. The grill is found on the prototype, and luckily a Details West HO scale EMD roof fan detail (2 bucks at the LHS) fit perfectly into the end of the airtank.

Next up was fashioning another small control enclosure that sits to the side of the tank. I pulled a spare LGB FO passenger car control cable part, and cut it down to just the electrical box. 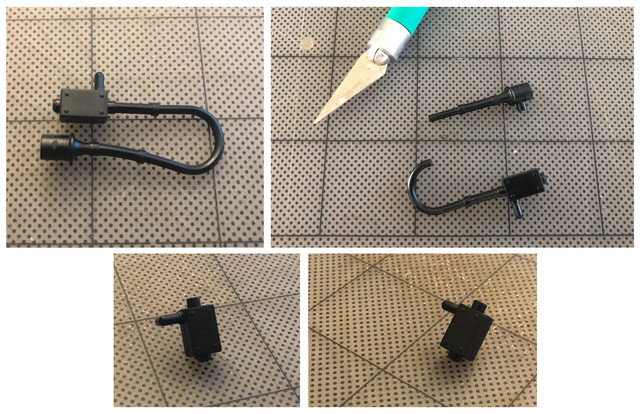 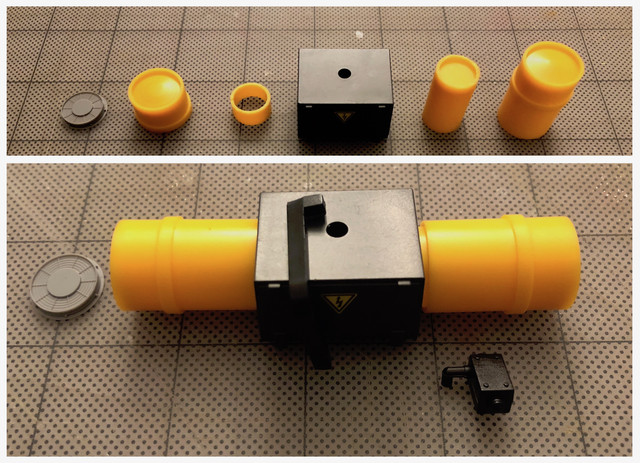 So I drilled the tank to accept the detail part. To get a better surface on the LGB battery box (and obscure the pad printing on it), I pulled out some black styrene sheet and cut it down to size. While I was at it, I cut additional sections of styrene to close up the empty/void backs of the undercarriage molding. (Man, this really ticks me off with most of LGB’s stuff. 1000 pound locomotives, 400 pound passenger cars and they can’t even provide air tanks and battery boxes with all fours sides?!) Anyway… And this is where the project sat, languishing in a box of “to-do” projects. Thankfully I found it on Sunday, and, with the right paint on hand, was able to keep going.

To begin, I took all the parts out and gave them a spray of color. The tanks and the center section of the under frame were hit with The Army Painter Uniform Grey Primer. The enclosure and tank guides were sprayed with The Army Painter Skeleton Bone. Once dry, everything went back out for a coating over matt varnish. 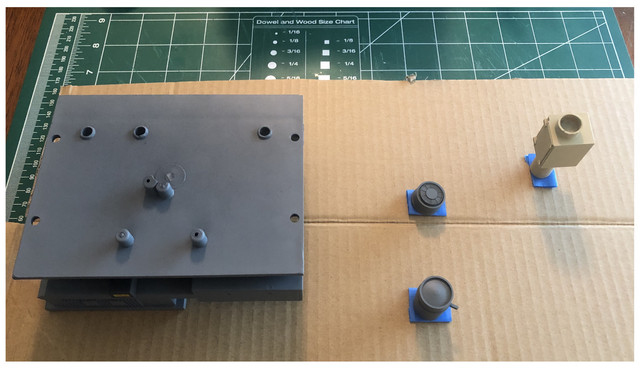 A quick line up of all parts, and then time to being assembly! 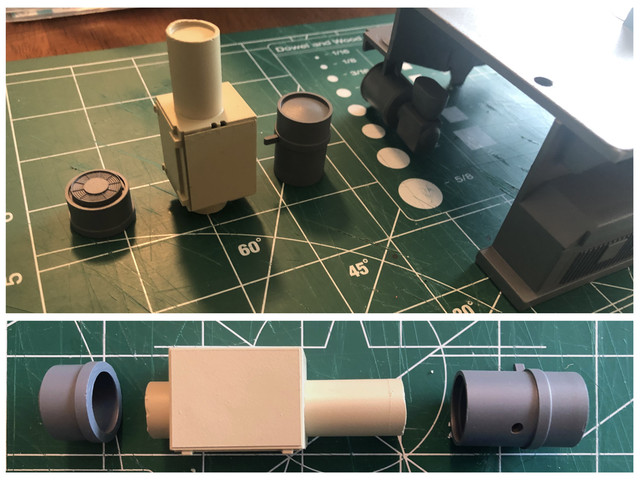 First, the tanks to either side of the enclosure, as well as the smaller electrical box mounted to the longer tank’s side. 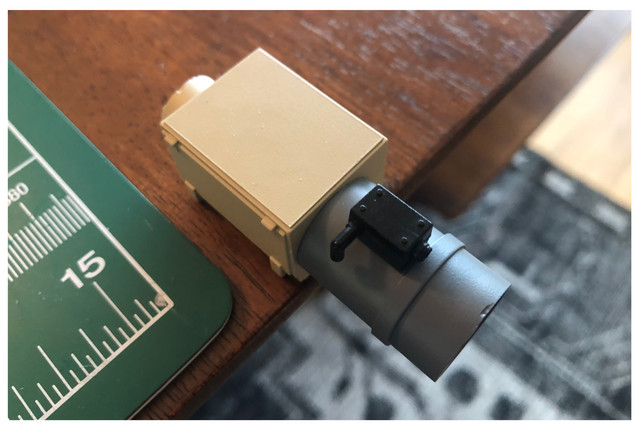 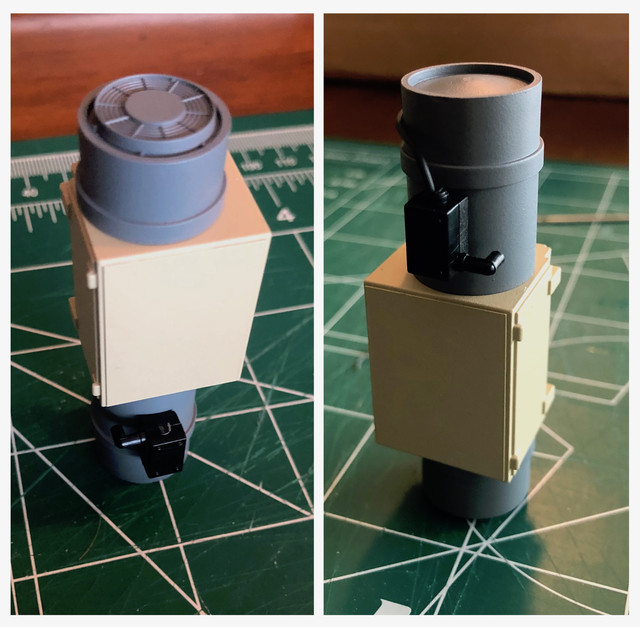 Next was using the pin vice to drill a small hole vertically down from the top of the center detail section and through to the lower level. This will then get a small section of cable fed through it to represent cabling along the locomotive. 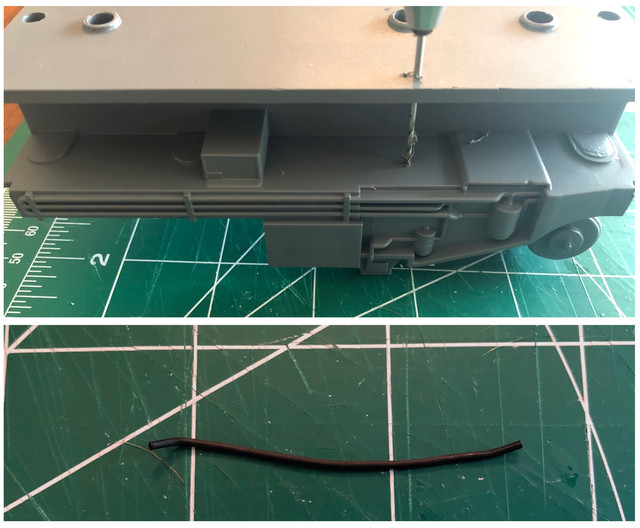 Using another Details West HO scale part, this time a “cab roof air conditioner,” I trimmed it down to fit over another small section of the KISS molded detail that was more accurate to the original version of the engine than the modernized version. This detail isn’t perfect for that actual prototype, but I think it does look better than the OEM piece. With the detail bits, and cables in place, I used cyanoacrylate glue to start mounting parts. And this then was the result.

And finally, here are some shots of the locomotive back together. There are still a few details I’d like to add to the build, but overall I’m happy to put her back on the shelf for now. This wasn't a major or particularly involved modification, but I do feel that just making this small change vastly improves the overall look of the KISS model as delivered. You are a brave man to take a razor saw to a KISS model! Great work, you are the master of detailing and your craft work is of the highest quality. Thanks for taking so much trouble to photograph and write it up.

idlemarvel said:
You are a brave man to take a razor saw to a KISS model!
Click to expand...

I'd say he was bonkers!

But nicely done all the same....
Expand signature
Gizzy, CME of the Logs, Gravel and Bricks Railway...

Thanks for this
Expand signature
RULE *8*

Takes courage to attack an expensive loco like the Kiss one you have attacked. In my view it has added some value as it will now likely be unique, however if a collector wanted it well a different view would be forthcoming. Like you I have an expensive loco a metal Aster LGB Harz 2-10-2, it has already been modified by the fitting of a Massoth Chip. I am looking to add Battery DCC RC to it whilst maintaining the Track Pickup. The real courage will be in weathering it!
Expand signature
JonD Dunnyrail East German Harz NG circa 1981 in Cambs. Link to my Railway Build A new Railway is Started - G Scale Central Dated vid of trip on my line mihi necesse est optimus

Thanks very much for the praise gents. In reality, the razor saw was less scary than one might expect - the fact I was attacking the under frame certainly gave me a sense of comfort if it all went wrong. Had this been the face or roof the loco, the pucker factor certainly would have been higher!


Gizzy said:
I'd say he was bonkers!
Click to expand...

And you'd be correct!

dunnyrail said:
...however if a collector wanted it well a different view would be forthcoming.
Click to expand...

Ah, well - see the thing there is any collector who may have an opportunity to own this particular locomotive will only have that chance after I have taken the great schmalspurbahn schnellzug to the sky! And in that case, I don't really care what they want to offer for it!

dunnyrail said:
The real courage will be in weathering it!
Click to expand...

Absolutely agreed! I have no problem with body paint, surgery, kit bashing.... but weathering... oh boy - that's not for the faint of heart!
Honestly, on all my models - I paint and letter them as if they were new... and assume in a few years I will run a small flotilla of cars and engines through a yet-to-be-found air brush jockey to weather everything in a few batches. Several of my cars absolutely need a pass of dirt and grime, but I'll source the reference images, and someone else can spray the paint!
Reactions: trammayo

Parkdesigner said:
Ah, well - see the thing there is any collector who may have an opportunity to own this particular locomotive will only have that chance after I have taken the great schmalspurbahn schnellzug to the sky! And in that case, I don't really care what they want to offer for it!

Parkdesigner said:
Ah, well - see the thing there is any collector who may have an opportunity to own this particular locomotive will only have that chance after I have taken the great schmalspurbahn schnellzug to the sky! And in that case, I don't really care what they want to offer for it!

Next, you'll be throwing the box away!

PhilP said:
Next, you'll be throwing the box away!

Not when you can sell it on Ebay for a hundred clams!