Does anyone own a slow running LGB/Aster WP&YR #73 engine? I exchanged the motor on mine with one used in the LGB rack steam loco. It works much better now. I is a job I do not recommend for anyone not accustomed to taking an engine apart. This one is difficult. Biggest issue: Getting the sprocket belt gear off the old motor. I had to scatch-make a new gear and a spacer block to mount the motor. The engine is running now about twice as fast and has less load sensitivity, meaning it is more willing to pull something. The pictures show the old and the new motor installation and the pulley-gear I made.

I own this engine too and made nearly the same conversion. Details in german:

I used a Maxon motor: 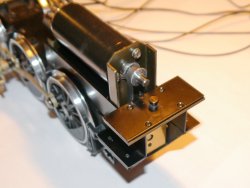 Now the engine has a good speed with enough power to pull a nice train.

I stay on english for our friends here. A good friend helped me with the conversion and he gave me the hint with the glue.

I've been considering obtaining one of these locos for my WP&YR inspired railway, but had heard they were a bit on the 'gutless' side. Interested to hear about the conversion, it may make me re-think my plans!!

50calMal you have the message correctly. The #73 is a bit gutless as it comes out of the box. It is slow and will not apply itself to do the job. I modified mine using the Buehler motor LGB uses in the Bruenig Bahn Rack Loco. Matthias used the Maxon motor. The Maxon seems more suited then the LGB one I used. I had to modify some hardware to fit in the bigger diameter and make a spacer block to accommodate the shorter length and screw hole pattern. The Maxon fits more readily. Unfortunately it is also more expensive. Let me warn you, the taking apart and reassembly is not one of the easier things I have ever done. Matthias has documented the entire procedure in detail. Click on his site above, it is in his message of Sunday at 10:07 AM (LGB 21832 WP&YR Dampflok No.73)
It is in German and you would have to translate the captions. Google has a good translating site, if you are not familiar with it I can help.
Happy to hear you are into the WP&YR. I just love that silly little railroad. I have been in Skagway so many times, I lost count. They usually give me free rides, but then, I also take any models I build of their rolling stock along with me, "show and tell" style. You may have noticed the model of the #114 in my logo. I scatch-built it as a brass model.

Thanks for the information. I've only visited the White Pass once but it gave me loads of inspiration for my current garden railway. It's a bit costly getting there from the UK! Yes I have seen pictures of your fantastic models, truly awesome. I'm just running LGB WP locos at the moment, but aspire to scratch build a shovel nose or two in the future - I am a time served mechanical (railway) engineer, so have the basic skills, just need the time!

The saga of my Aster/LGB Mikes occupied a few pages of MyLargeScale a number of years ago. I bought the first example from MBV Schug in Germany. After a little pre-run lubrication it was put on the rollers, where it ground to a halt - literally, within 30 seconds. I took it to the UK LGB distributor in Leighton Buzzard, who could not have been more helpful. He gave me a replacement, right off the pallet, there and then. And wished me luck with it.

Getting it home, and setting it up, it lasted almost a whole minute before that ratchety noise announced a full stop. I took THAT one back, and Mr Distributor, instead of giving me a new one, took it to Nurnberg with him the next day or so, and walked it onto the LGB stand with a demand to get things sorted, fast.

The upshot, within a few weeks, was a revised drive train, which did not, however, address the dismal performance of what was, here in UK, a model that had cost almost £2500. When mine finally came back to me, it was accompanied by a letter from the late Wolfgang Richter, telling me that all was now well, and not to just stick it on the shelf and look at it. Sure it runs slowly, but so does the real thing - it ain't no 'Mallard' for sure. Six Bachmann WP cars are enough to make an impression of a good-sized consist for many people, me included.

Having been given assistance by the gentlemen who have posted their useful 'how-to's' on this thread, I can advise people here that re-motoring this loco is NOT for the faint-hearted, and I'm therefore leaving mine well alone.
Show hidden low quality content
You must log in or register to reply here.
Share:
Facebook Twitter Reddit Pinterest Tumblr WhatsApp Email Link
Top Bottom