Having recently started to do my Black one of these and run into problems I decided to get started with this one. Problems with the Black One Link:-

Long shot I know but I have just started on this Loco to convert it to Battery DCC. As it has 2 Bogies each with their own link to the Chip I decided to see if Power via one Bogie would run the beast. Effectively pulling out the Track Power Plugs on the Front Bogie and Powering it from DCC on...

I have successfully turned my TL Pfiffi to Battery DCC, as this had a Zimo Decoder A’s has this Green one I hoped for more success. Pfiffi Job Link:-

NOW THE BATTERY WORK BEGINGS Train Line Pffifi and Mallett Break Down Diagrams any one have a link please? Link provided thanks. - G Scale Central

I will soon all being well be Barreyising some of my DCC Locomotives, to that end have been looking at Pfiffi's underneath anatomy as shown below:- I see 6 relevant black screws, 2 either side by the cylinders, 2 more by the Couplings and 2 more below the front of the cab. I think these should...

I had hoped to be able to link here the Backdating work I had carried out on the Green one, but I sometimes no mostly find that the search is not helped by forgetting what I called or where I put my Posts. My only option is to try to remember to Watch them.

So yesterday as it was raining I decided to make a start on 99 5902-3 as backdated to 1981 condition. Here is the inside just after starting the work. The Smoke Generator has been removed as with the Pfiffi Conversion, I need the space for Batteries. Those 2 remaining weights will have to go as well for the same reason. The Weights that would fit inside the Side Tanks have been removed for working around. Some will return but others will not. Oh if you do something like this remember the way round that they came out. They have unequal lengths between the screws and the end. 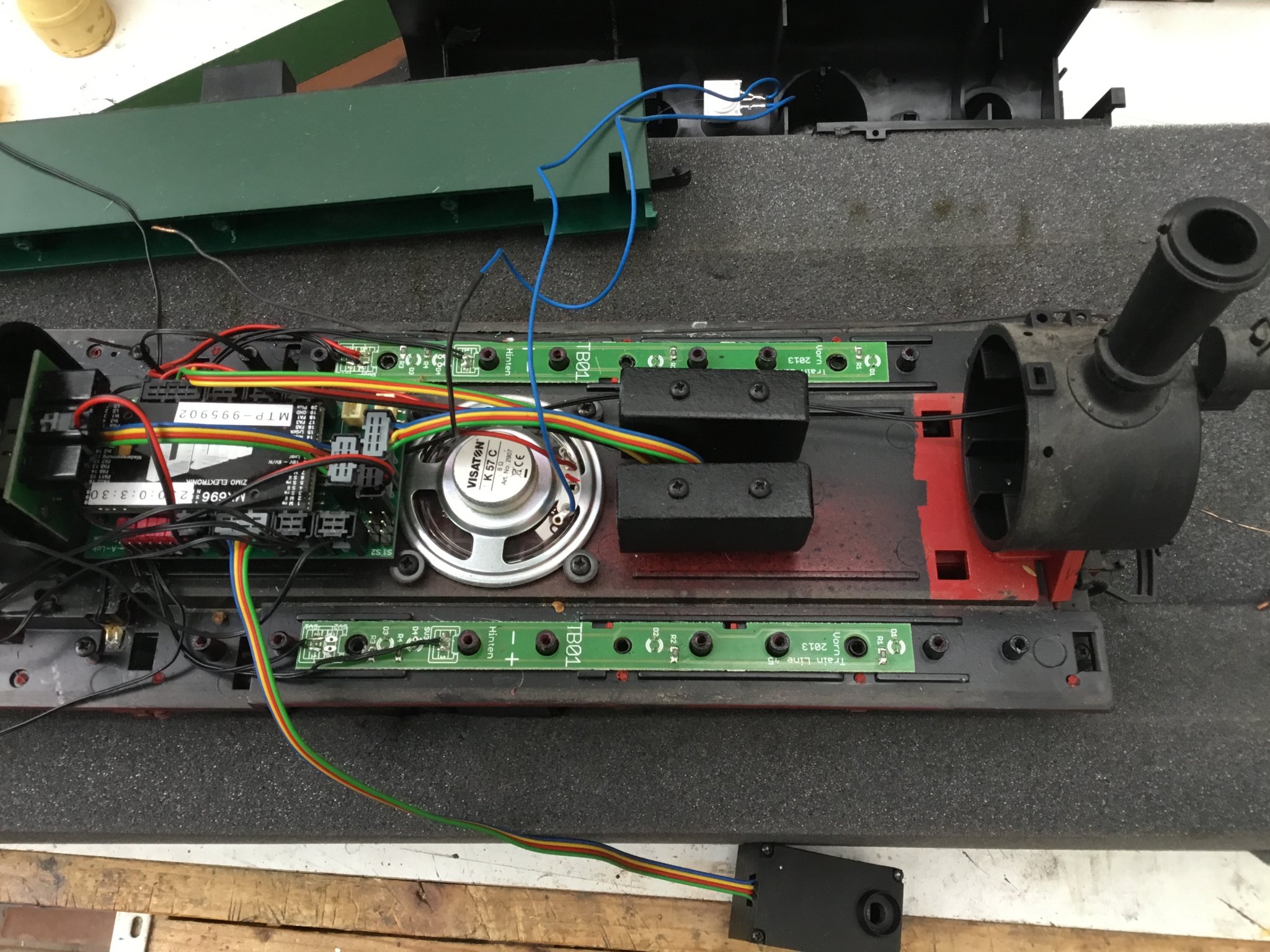 Here you can see the Chip in closeup, the 2 Blue Wires go to the Pot to lower or increase the noise. 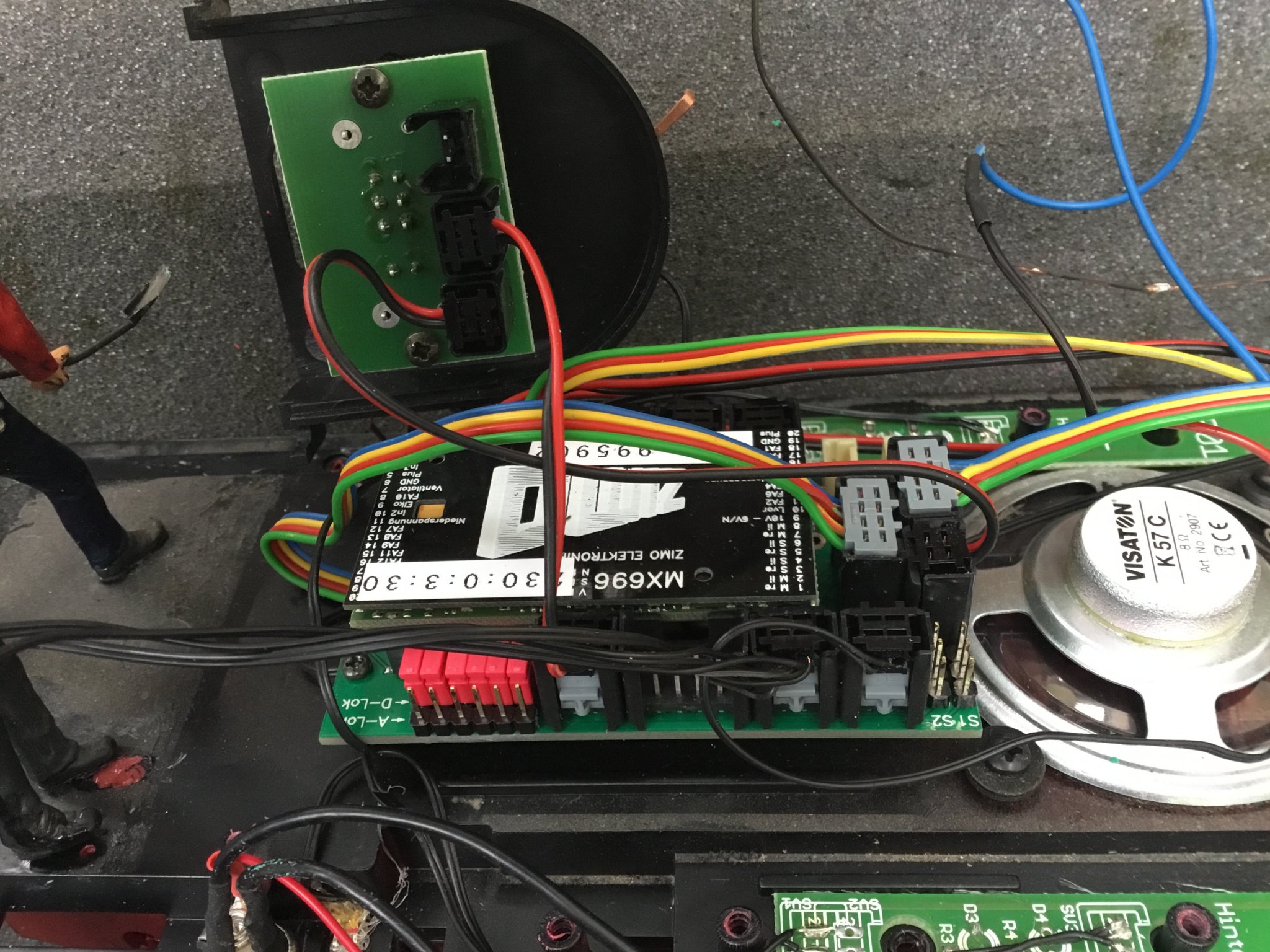 Here you can see that I have put the Charging Socket on the Cab Floor, I got it in the wrong place hence the empty hole. No worries this will not be seen. I have used a Fosworks Wiring Loom, makes things so much easier but this one will be getting a little mod details later. 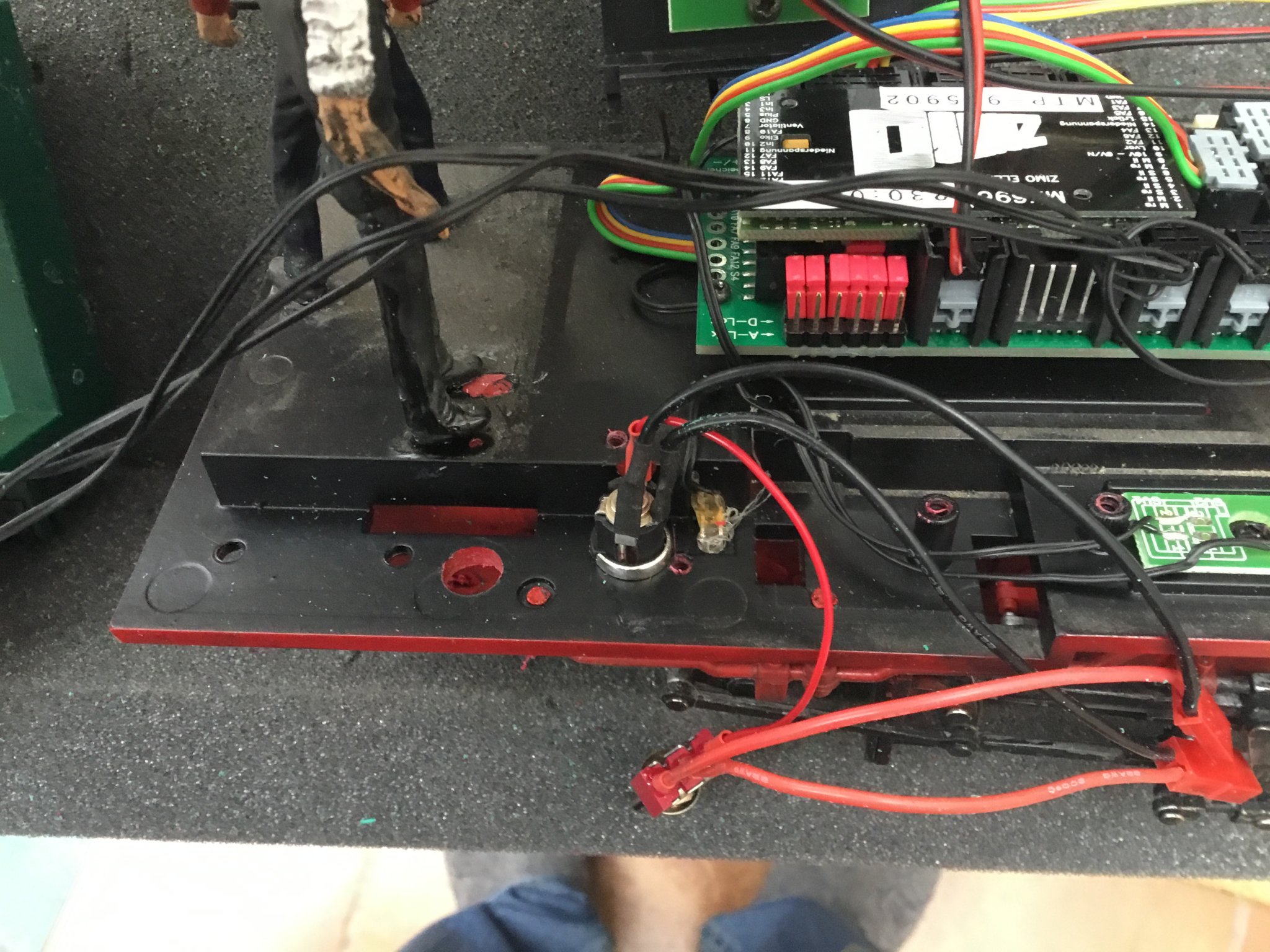 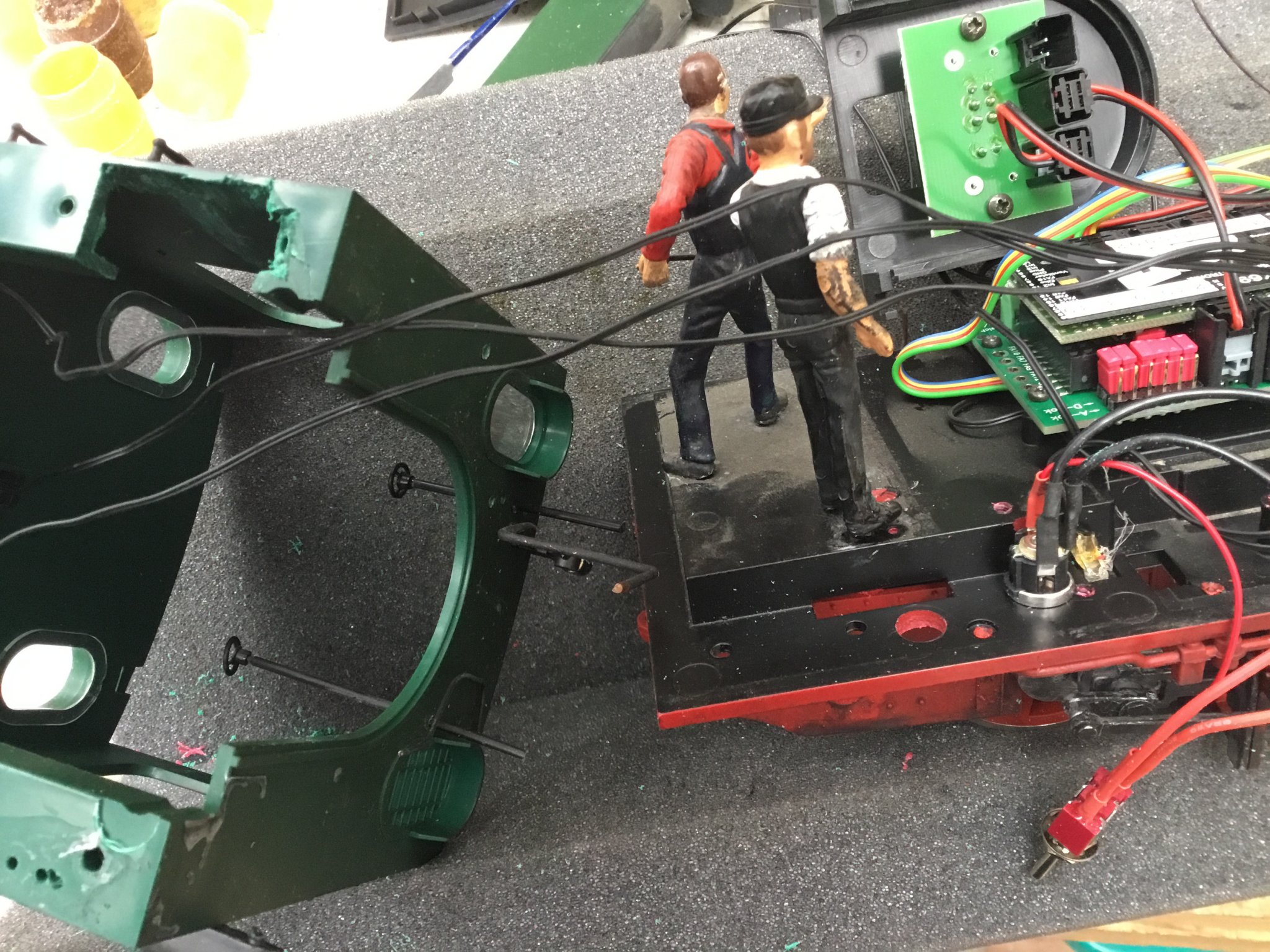 Here I have cut and joined the 2 sets of Red and Yellow Wires from the Track Pickups together. I did check that they were orientated correctly with a Meter just in case. You do not want to cross those feeds at any stage. I erroneously coupled these to a socket for Power ... Doh needs to go via the Fosworks Battery DCC Board. Idiot! Note that I have also Heat Shrunk the spare cut offs of wire just in case of any stray feeds. I should have just pulled the wires from the Pins as I did with Pfiffi and have done with the Black Mallett! Doh again. 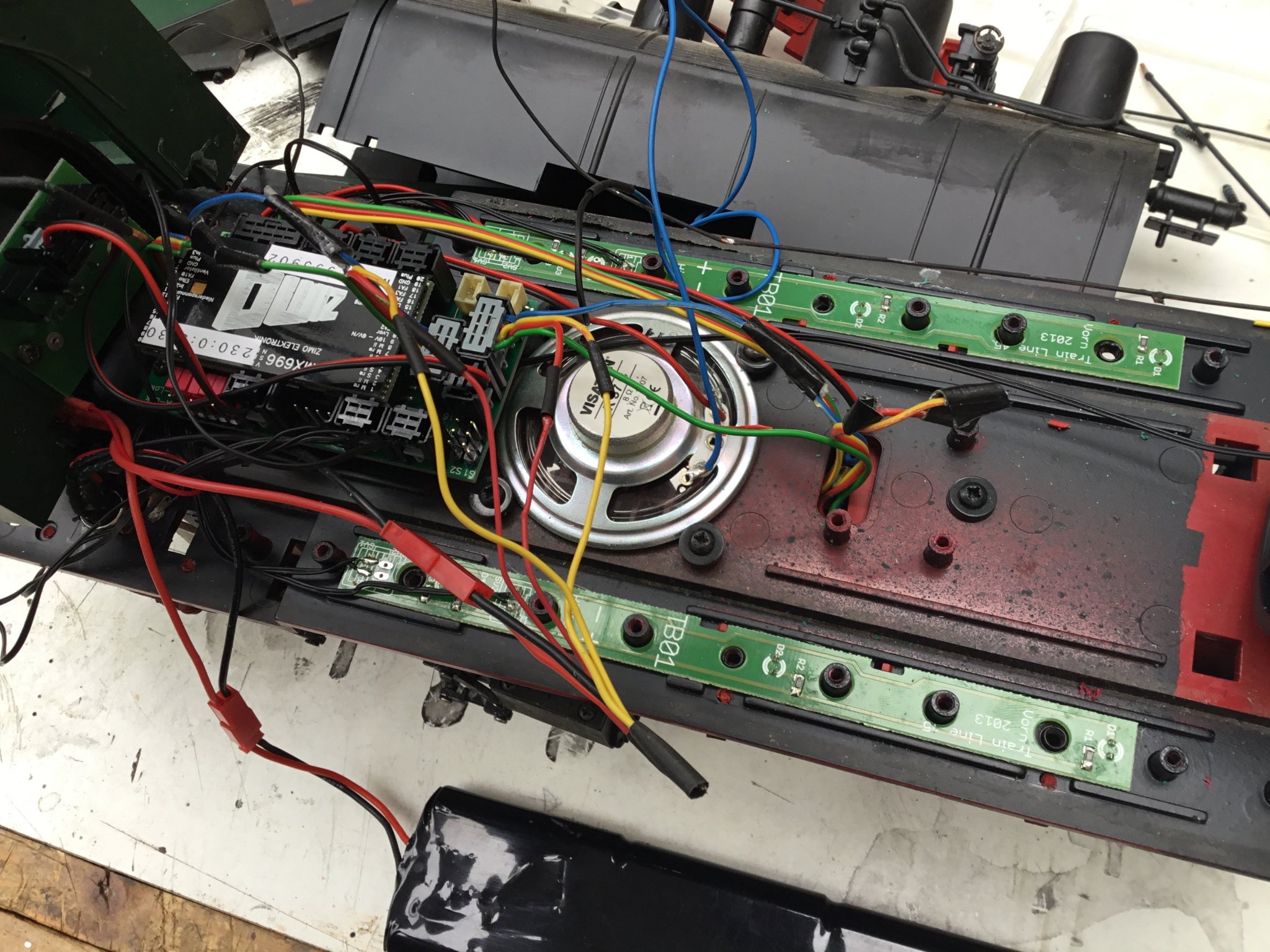 Still were are getting somewhere now, the two sets of feeds (red and yellow) to the Chip that were from Track Power now in the DCC sockets on the Fosworks Board. The Power from Battery (red and black) to the outside completes the installation. Now it can be tested out with my Test Battery Pack. 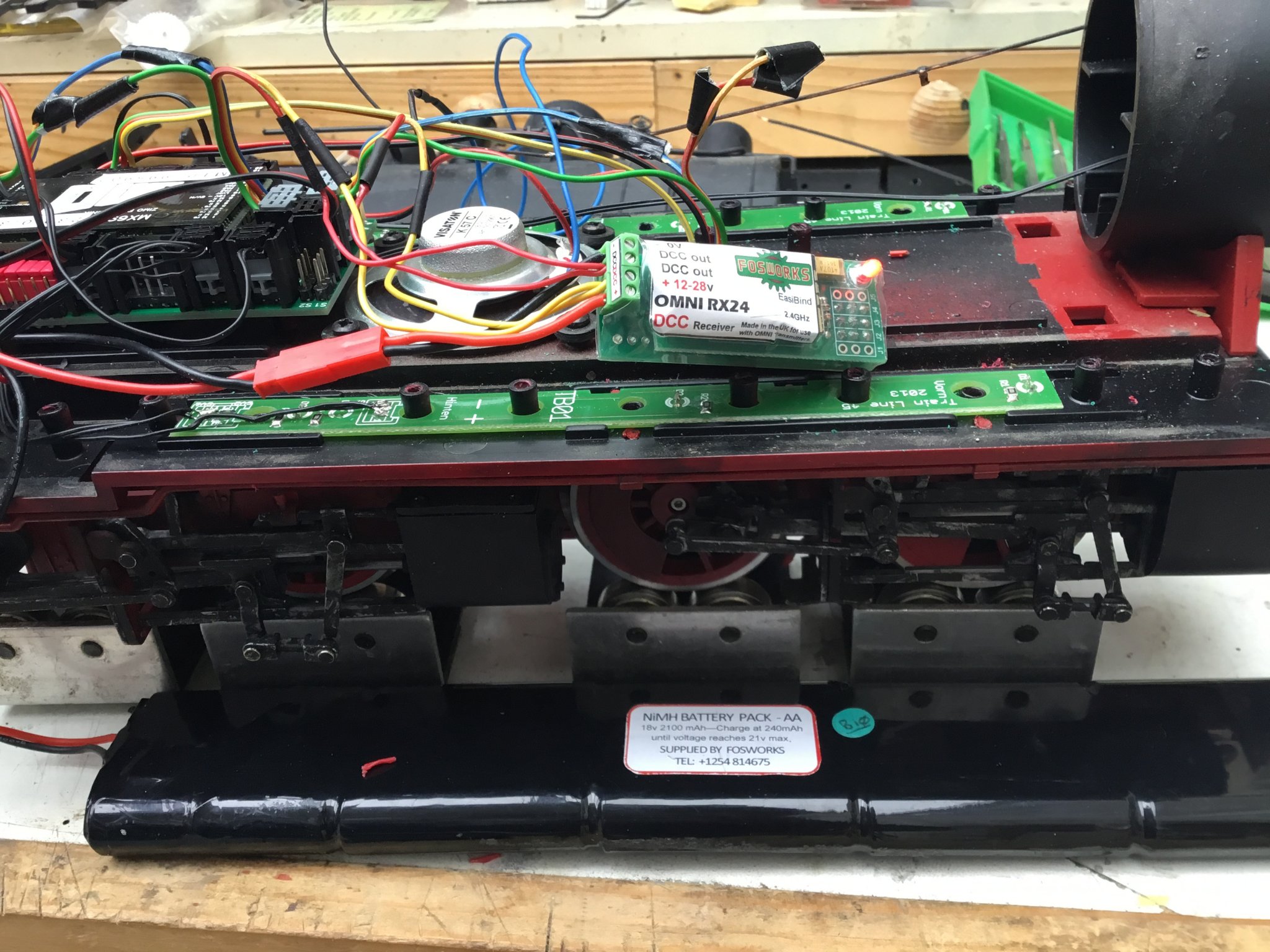 Great no problems with the Hall Sensor, 4 beats to the revolution of the Wheels. But I have not removed any Plunger or Slider Pickups from this baby as yet!

Here you can see where I fitted the On/Off Switch from the Wiring Loom. Driver Herr Wuick will need to move out of the way some. What I have not shown is how the twin Battery Pack fits. The 4 section fits into the Boiler and the 8 section just behind. The Fosworks Board sits just on top of the Chip after erroneously plonking it on the Speaker. I think that is may have been better to place the Speaker in the Smokebox thus leaving more Room for the Batteries and Fosworks Chip ... perhaps? 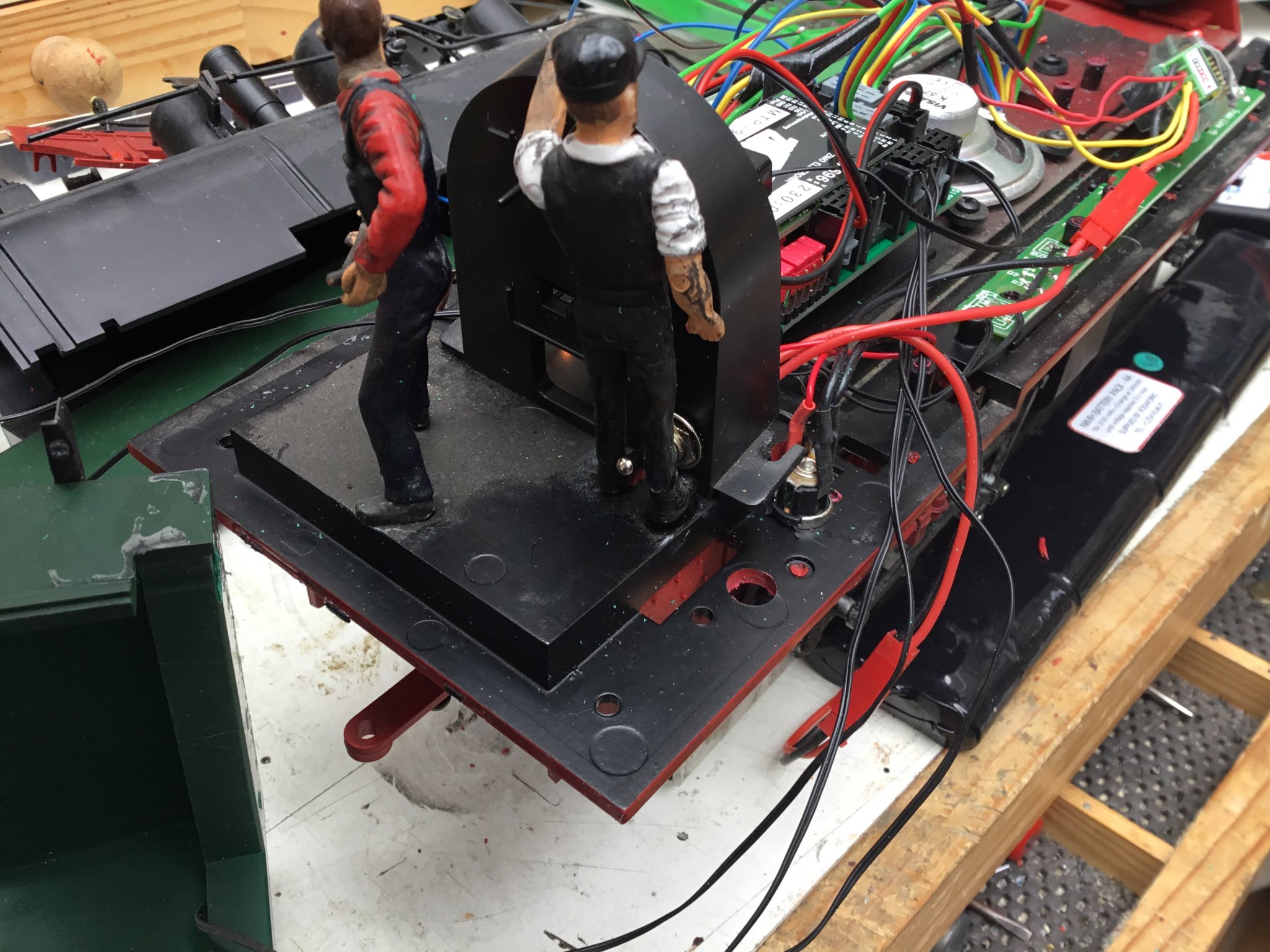 I needed to make some more space in the Smokebox for the Batteries. There were some protruding Lugs atbtne Front of those that remain. There are 12 AA’s in this Loco, 4 in the Smokebox and 8 just behind. All carefully worked out on the Black Mallett when I dismantled that. I ordered enough bits from Fosworks to do both Locomotives. 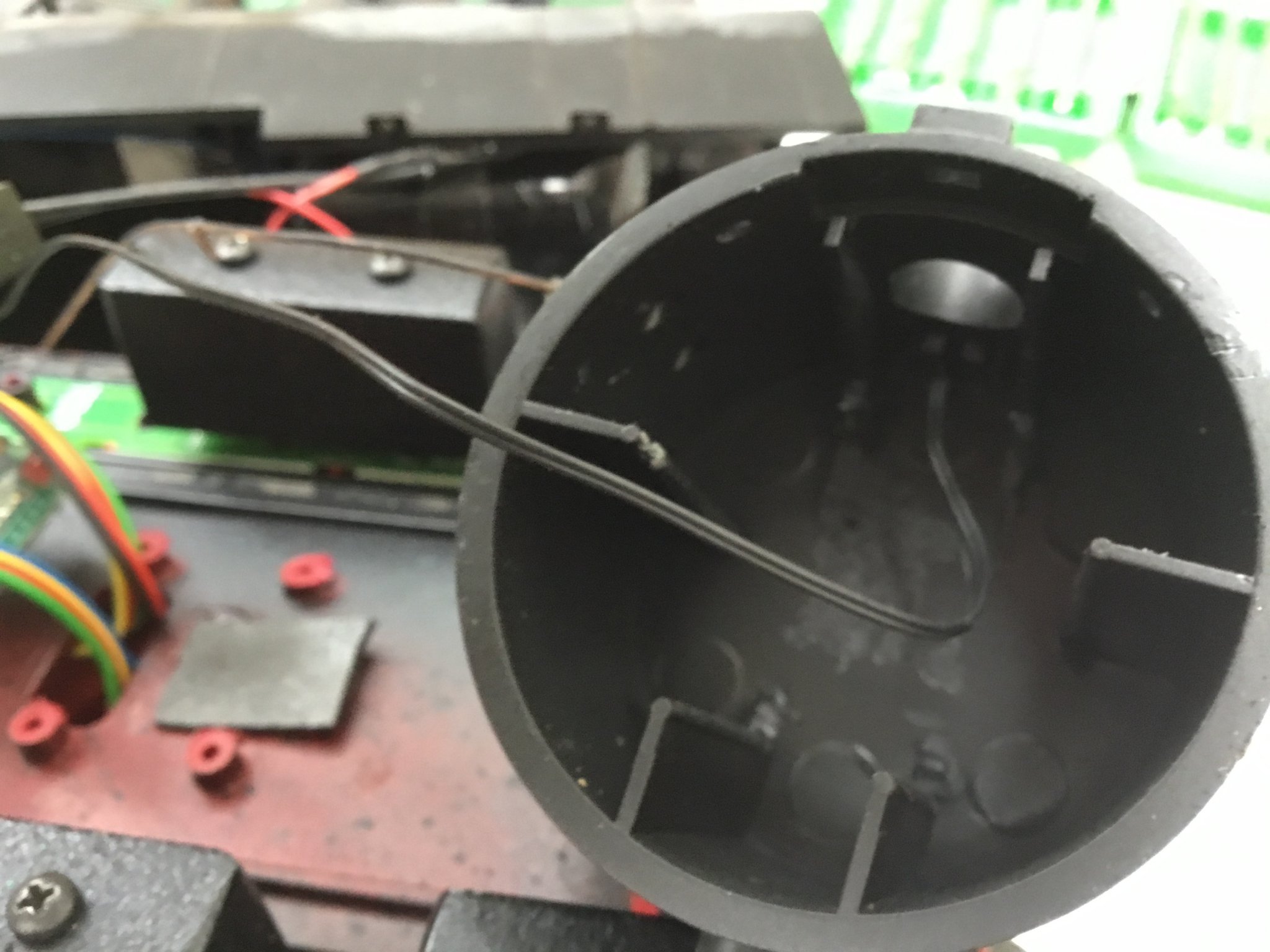 Here I have tidied up the wiring and secured it with old GPO Phone Wire. That flap of Pondliner is to stop the screw rubbing on the Battery Pack. 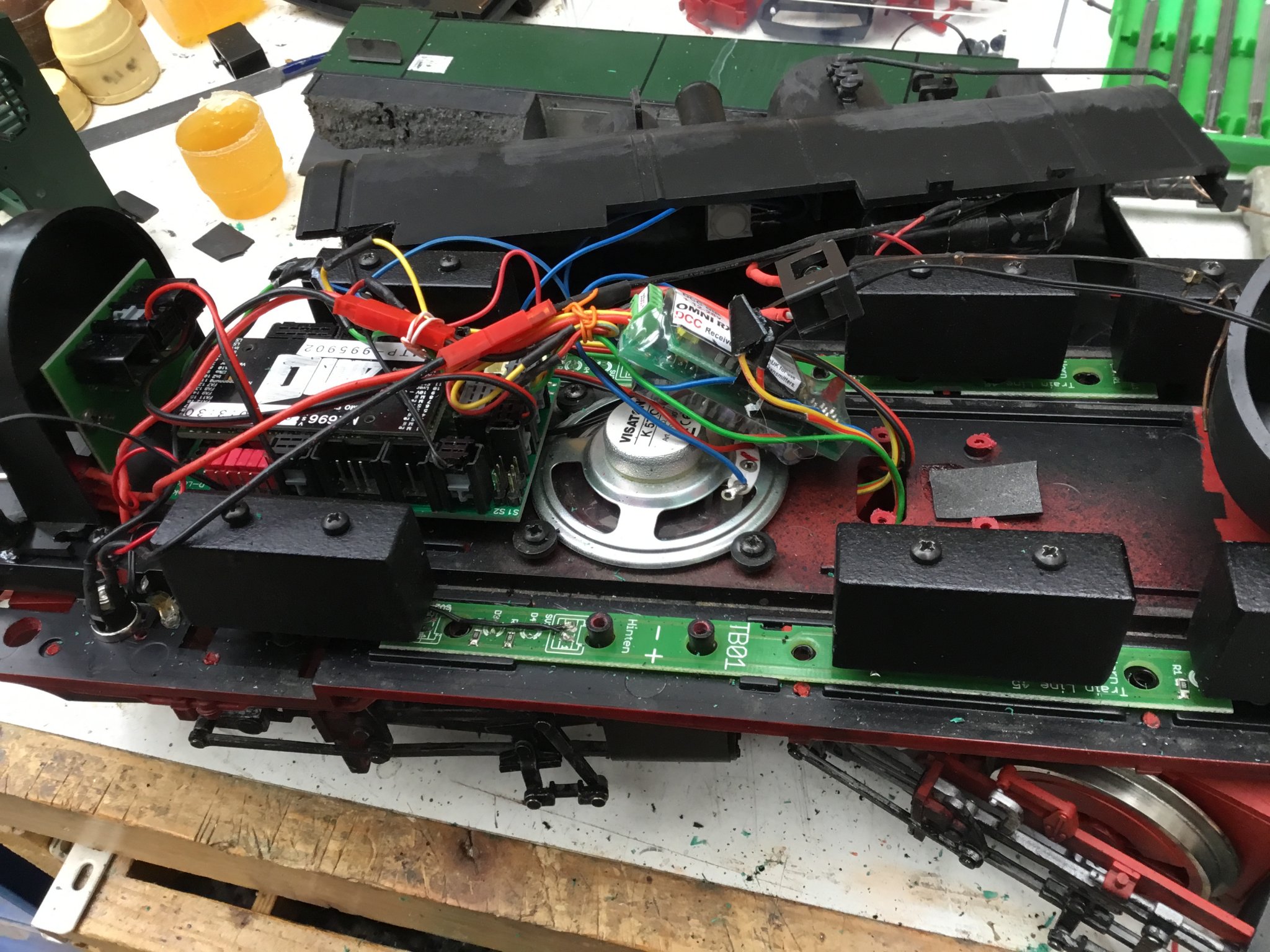 Not seen is the amount of plastic that had to be hacked at the front of the Cab to get the Wiring Loom in place, also some from the back of the same side tanks to get the Fuse Out of the Tank. Also some Weigts have been returned, 3 each side. You should be able to notice the difference in length from the screw at each end.

At this stage ell was stuffed back into the Boiler and the Engine made good again.

Here below is the recited Fuse. I cut the Red Wire on the Wiring Loom and extended it so that the Fuse is easily accessible as shown. The gap was cut out using the Mini Drill with a Round Saw Blade. 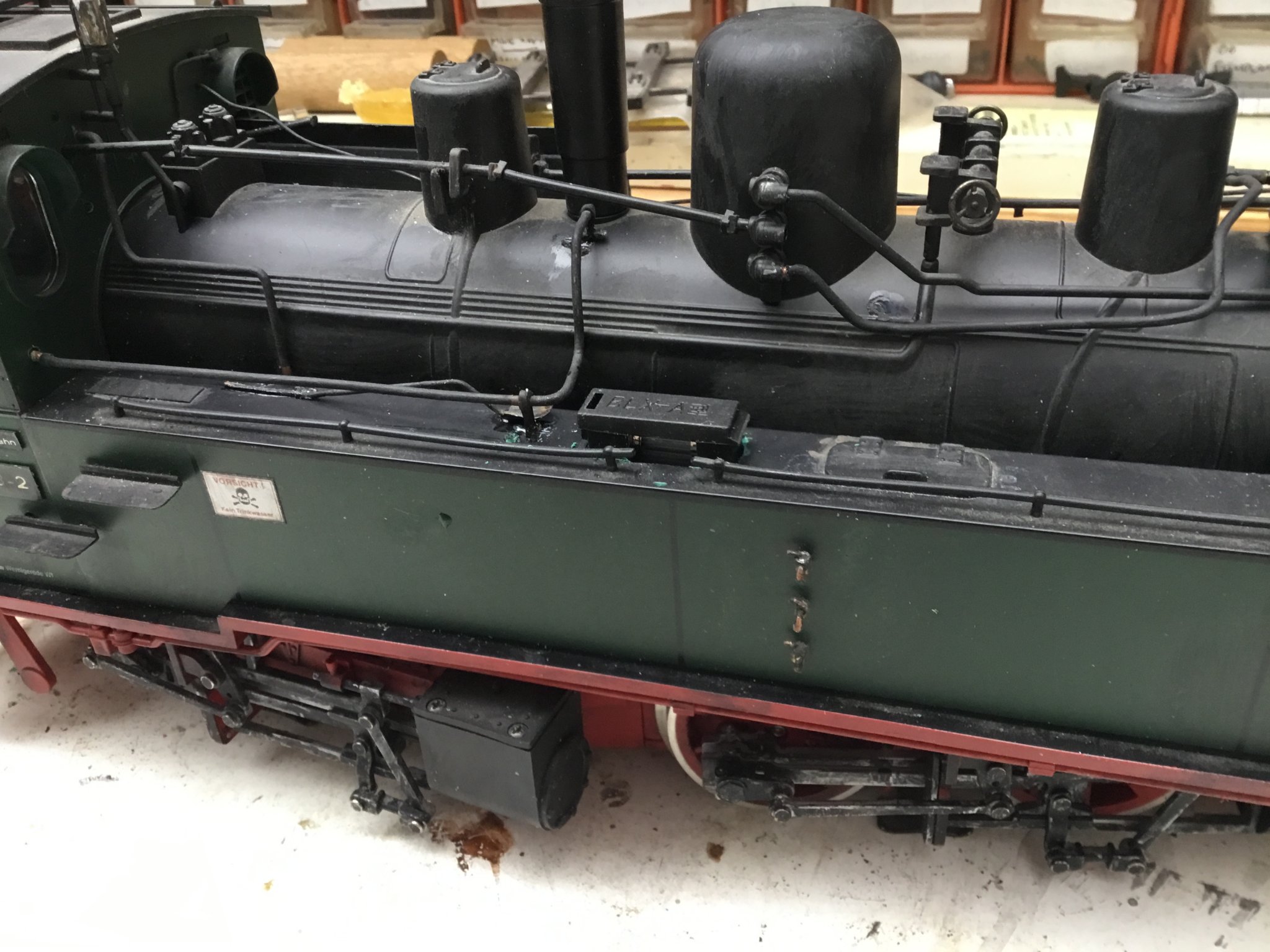 Finally I made a Toolbox to replace the smaller one to hide the Fuse. Scraped off Paint touch up and she is now ready to go. Started on Saturday 1300-1730, finished today 0900-1200. 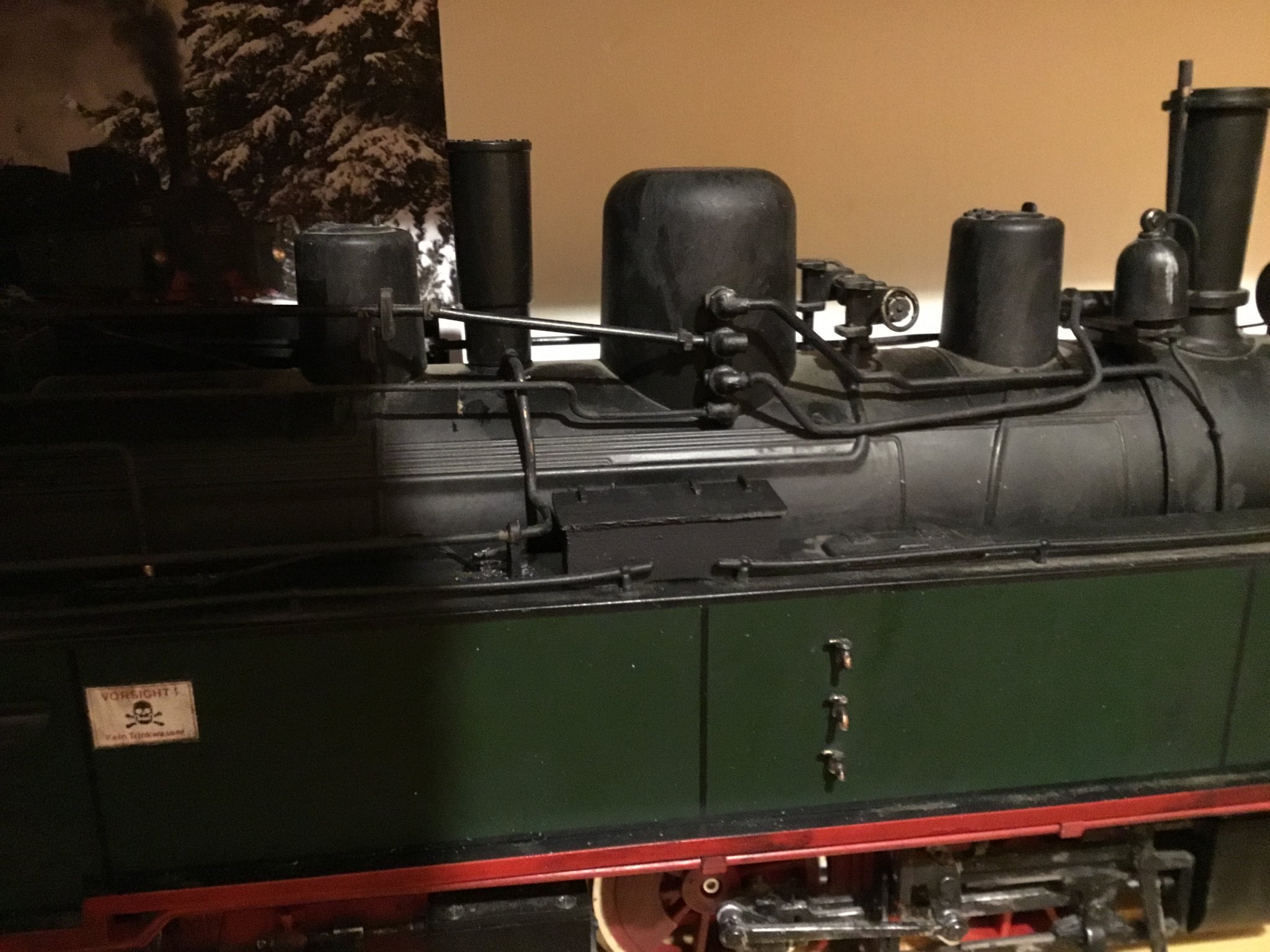 Nice one Jon, good to hear it went better than the last conversion

Ozymandius said:
Nice one Jon, good to hear it went better than the last conversion
Click to expand...

Many thanks, the other one is still on the Workbench in bits so is ongoing to be resolved at some stage.

Meanwhile some serious Testing of this baby took place today. I was keen to see that it would manage the Real Test which is the Fuel Train, 2 Coaches and a Van (20 metal wheeled Axles) round the 1:40 on a 4ft Radius Curve. This is always a little worry when weights have been removed but I am happy to say she passed the Test with flying colours as this Vid shows.


I also took a few static shots of the Testing. Of interest are the 2 Coaches that rarely see the light of day, the Sachen DR Coach and a Feld DR one. The rest of the stock is in normal use but those 2 Coaches live in the back Siding of the Low Level Fiddle Yard to rarely see that Light. Also note the proper Harz Style end of Train Markers.

Approaching MagDesprung, note the Arrival Signal left pulled off. Also the Round Junction Signal to the Right indicates the route up the Hill from the Fiddle Yard on the Low Level. This Section forms the rarely used Continuous Run. 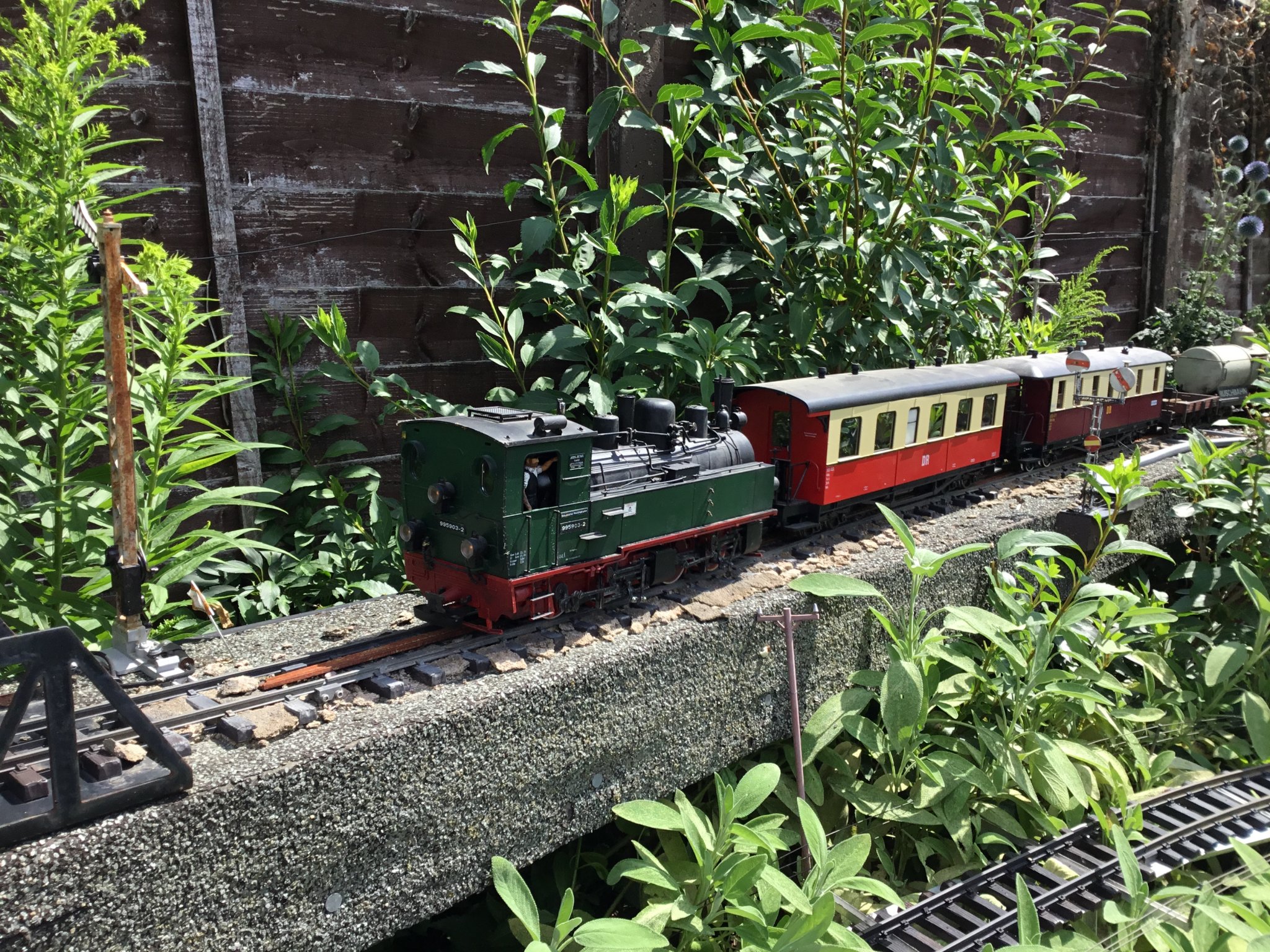 Next Picture shows the full 20 Axles at Magdesprung. This 2 rarely used Coaches show up nicely now. What a difference in the standard DR Red and Creme. 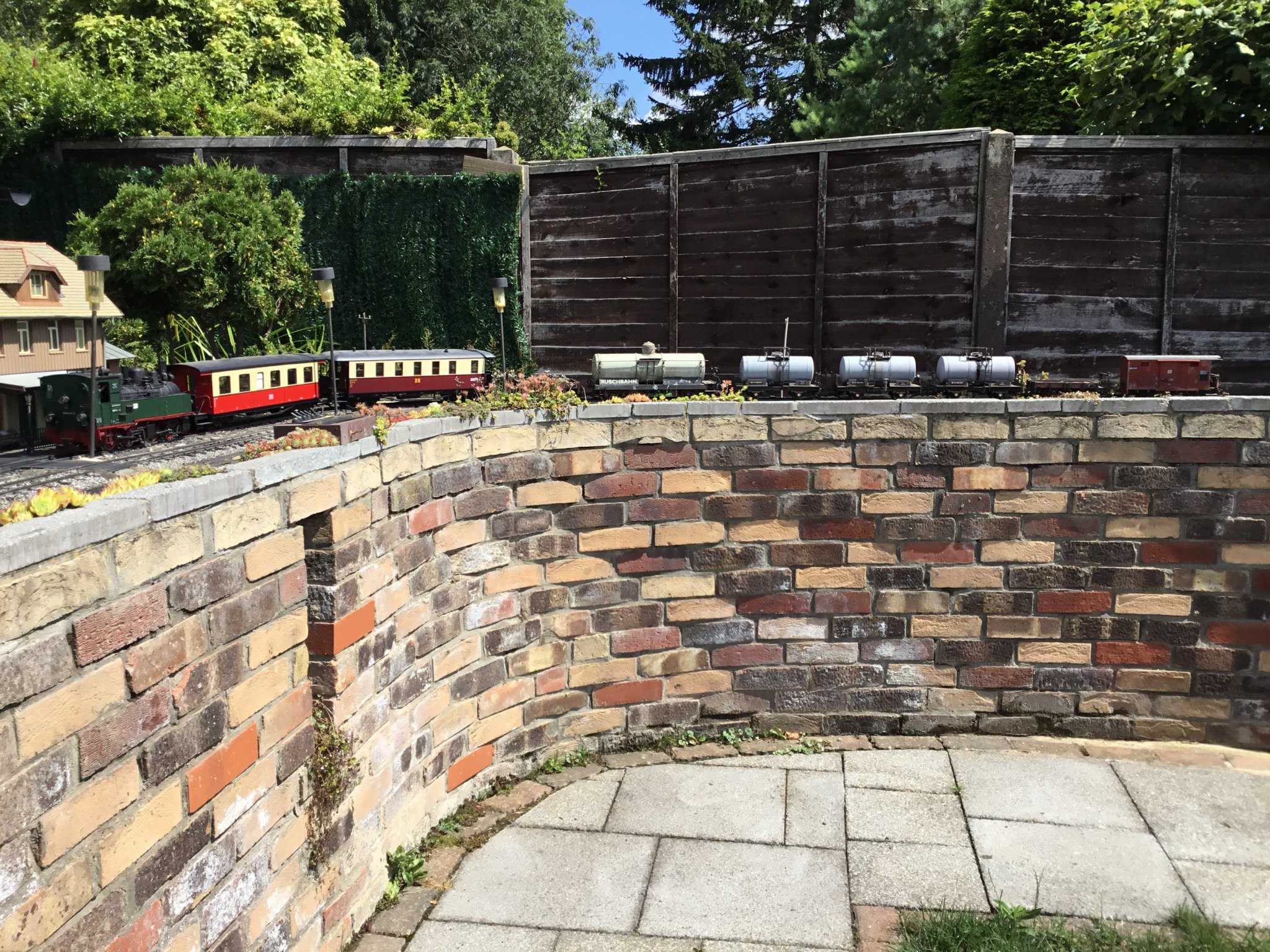 Rounding the curve towards Drahtzug, note the two end of Train Markers. Every Vehicle has been modified to take these but I rarely use them. 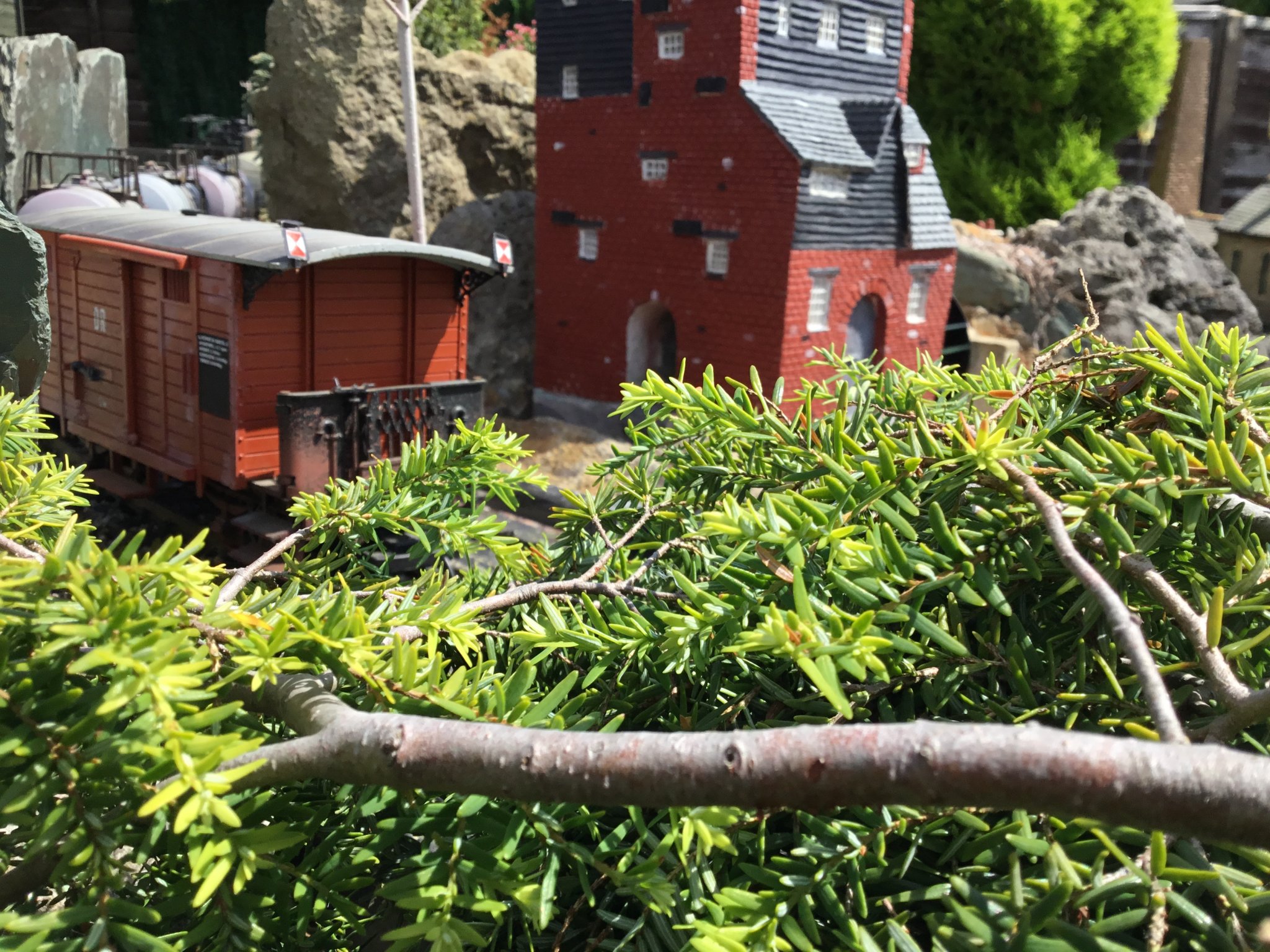 Having arrived at Silberhütte for the return journey the Loco has just run round the Train, but is waiting for the Train Fuhrer to move the End of Train Markers to the back of the Consist. 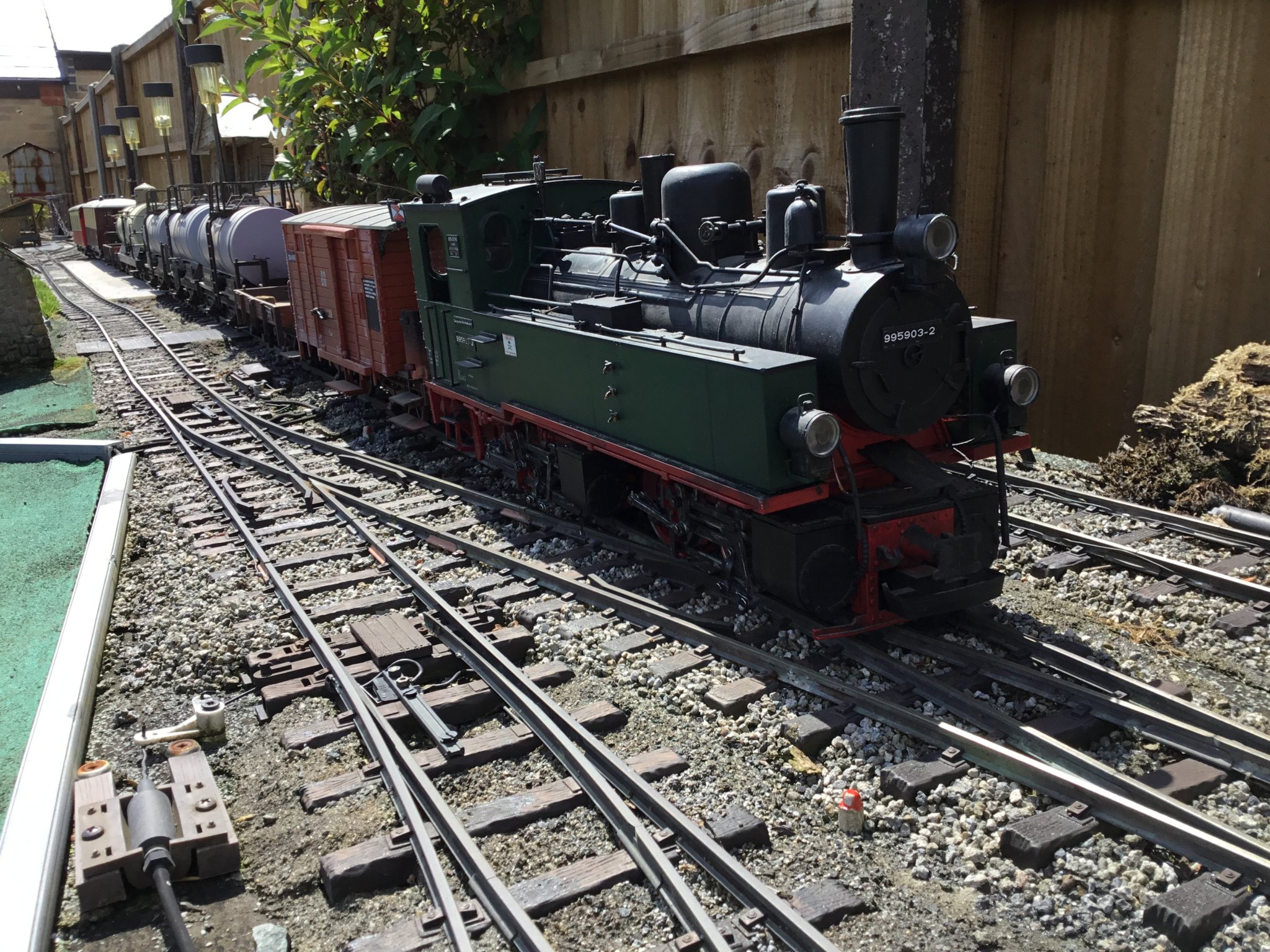 Final view of the Loco showing some missed paint touching up to be done. This was done in situ with my favourite Matt Black ‘Dekormattt’ Acrylic Paint. This stuff has great coverage and in the Sun was dry in seconds. 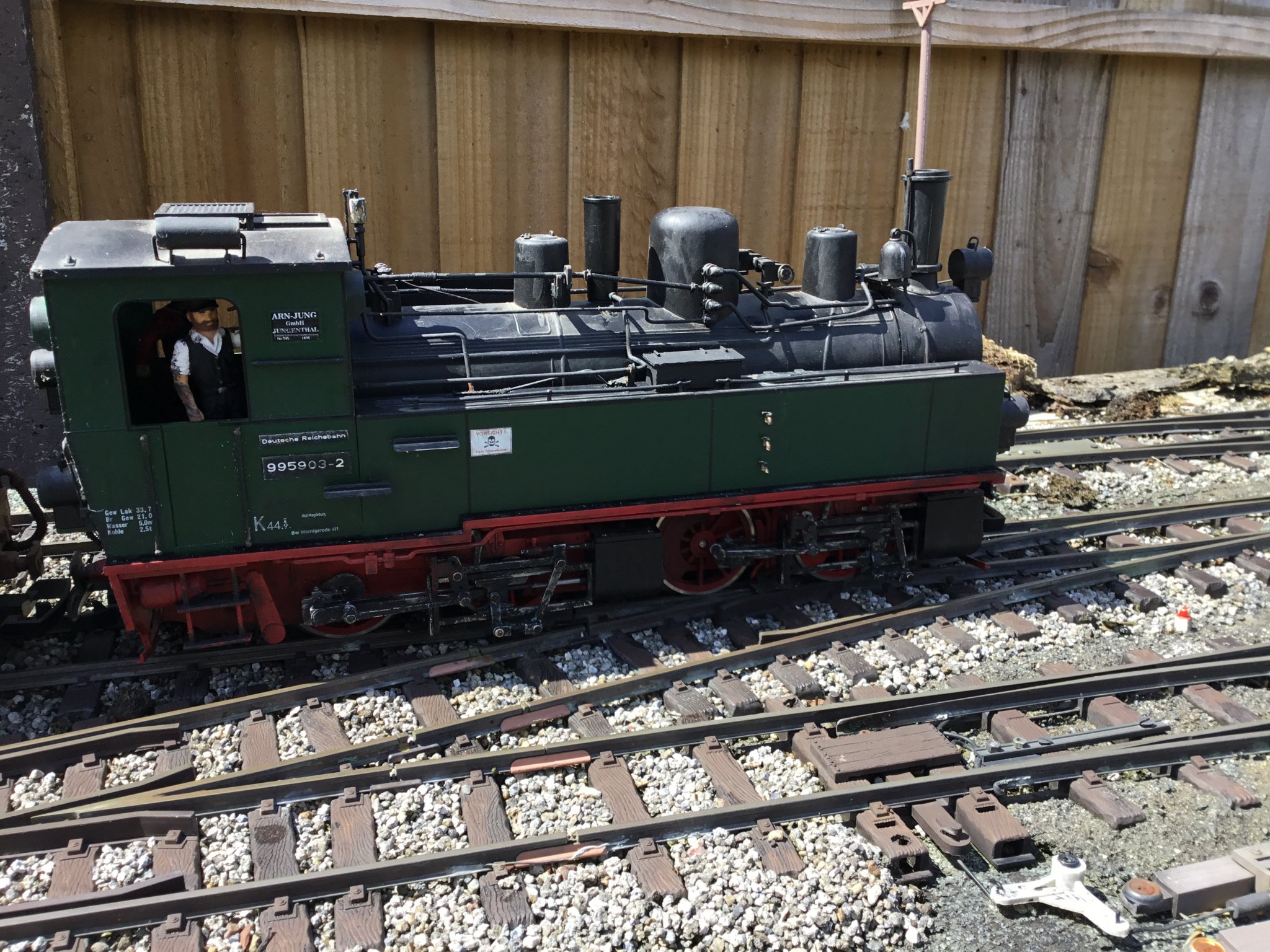 It is so good to have another Battery DCC Loco to run. The pleasure involved with the superb running and sounds of DCC but with no Track Cleaning makes the effort and cost of conversion all worth while.
Expand signature
JonD Dunnyrail East German Harz NG circa 1981 in Cambs. Link to my Railway Build A new Railway is Started - G Scale Central Dated vid of trip on my line mihi necesse est optimus
Reactions: tac foley

I'm currently converting a black version with the Massoth gear in. It doesn't seem to like the Fossworks DCC system you are using. Did you have any issues? At idle, the smoke unit, motion lights, and headlights are all pulsing...
Z

Great job, pictures are great. What is the cost about for the parts needed for this conversion. Electronics, speaker, and battery. Thanks

I'm currently converting a black version with the Massoth gear in. It doesn't seem to like the Fossworks DCC system you are using. Did you have any issues? At idle, the smoke unit, motion lights, and headlights are all pulsing...
Click to expand...

Hi Andy, sorry to be so long replying been away and not able to get access to a PC or even get WiFi access.

I have had problems with my Black Mallett, is yours fitted with a Massoth Decoder? Look at my linked thread to see the issues. This thread is about my my Second TraiLine working Green Loco Conversion, the other was Pfiffi. Both have Zimo Decoders though I do not suspect the Massoth Decoder on the troublesome conversion, just a trashed Hall Sensor.

May I suggest that you have a chat with Steve at Fosworks with your issues?

Though just one thought I assume that you have completely separated the Track Power from your conversion?


zman50 said:
Great job, pictures are great. What is the cost about for the parts needed for this conversion. Electronics, speaker, and battery. Thanks
Click to expand...

Dunnyrail. What is the TrainLine mallet like anyway? Is it good value? Any issues?
I'm not too keen on the black and red brick locos of the Harz but the mallet is more my cup of schnapps.
I need something authentic to haul my blood and custard coaches.

Paradise said:
Dunnyrail. What is the TrainLine mallet like anyway? Is it good value? Any issues?
I'm not too keen on the black and red brick locos of the Harz but the mallet is more my cup of schnapps.
I need something authentic to haul my blood and custard coaches.

Both of the Malletts are great Locomotives, but if Sound is your thing then the Zimo Fitted Chiped Ones have a better selection of Sounds. Both ran very well on Track Power using DCC but as this thread indicates I have got fed up with Track Cleaning and am gradually changing all to Battery Power.
Expand signature
JonD Dunnyrail East German Harz NG circa 1981 in Cambs. Link to my Railway Build A new Railway is Started - G Scale Central Dated vid of trip on my line mihi necesse est optimus
P

Thanks dunnyrail. I was aware of the better sound Zimo in the later versions. I'm just getting over my recent acquisition of a live steam Lyn but I'm sure I will need a new engine fix sometime later, possibly after selling the LGB Harz 2-6-2.