Outside Drive in storage shed

Not sure what to call this or if this is the correct subforum. I want to run my trains more and schlepping them in and out of the house each time reduces the likelihood of this. I saw a video of a layout which had a long, low storage shed where the guy drove his trains in, parked them and then drove them out. Anyone here have one and willing to post some pics? I have a space next to my house I can fit almost a meter wide by about 3 meter long shed which is level to my patio. I think I can fit 4 track sidings in there using R3 turnouts. Not sure how to do a lift off roof yet. I will have to contend with the utilities which all seem to enter along that wall so I don’t want to dig or concrete a foundation for the shed. Just trying to get some ideas and lessons learned. Thanks.
P

Can not show you any pics because I'm not there yet. I'm sure others can. Dunny? i have plans to get there next year. I suggest you use pressure treated lumber as your foundation. Dig some footings. They don't need to be deep, just 5 or 6 inches of gravel for for your cross members. Then pressure treated lengths for the base and put your tracks down. I envy the space you have! Mine will be going into an eight foot deep shed so will need shelves except for maybe two directly connected tracks. All you need to do is go for it!
Expand signature
Phil S
Reactions: Derailed

My Sheds are all conventional Sheds (you can see them all by watching the video linked below). As for a storage Shed idea there have been some posted on here but as ever you would appear to have particular issues. My suggestion would be to make up your Storage Unit in situ, a rood could be simply hinged at one side with that lifted and a catch to hold up during operations on the side of the house? The other side should have a couple of good padlocks. As for the base I suggest that you put it on Block Paviours or even bricks bedded into gravel, the key is to keep the wooden base away from dirt that will rot it.

I would suggest also that only Wagons and Coaches be stored in there, keep the Locomotives indoors they are the big value items plus the damp at,o sphere in these storage units will possibly do the electrics no good at all.

if you modify the points some I reckon you may make 6 or 7 sidings in that metre, again somewhere perhaps in my Railway Build I show how I cut down the space to fit more tracks in my lower fiddle yard in my shed. I have 5 sidings in around 2’6”.
Expand signature
JonD Dunnyrail East German Harz NG circa 1981 in Cambs. Link to my Railway Build A new Railway is Started - G Scale Central Dated vid of trip on my line mihi necesse est optimus
Reactions: Derailed
J

This is an example of an idea that Phil Spiegelhalter from the Solent G Scale Area Group used.. 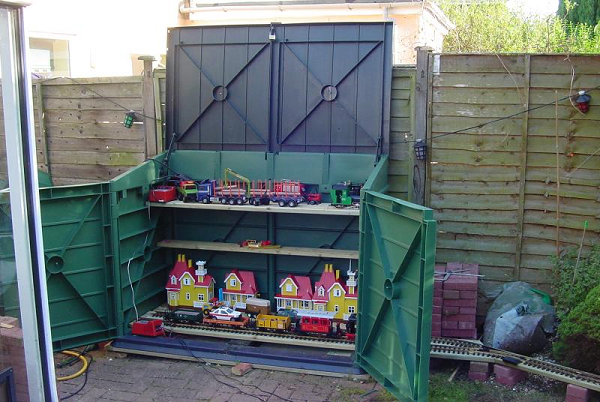 From the Keter web site... 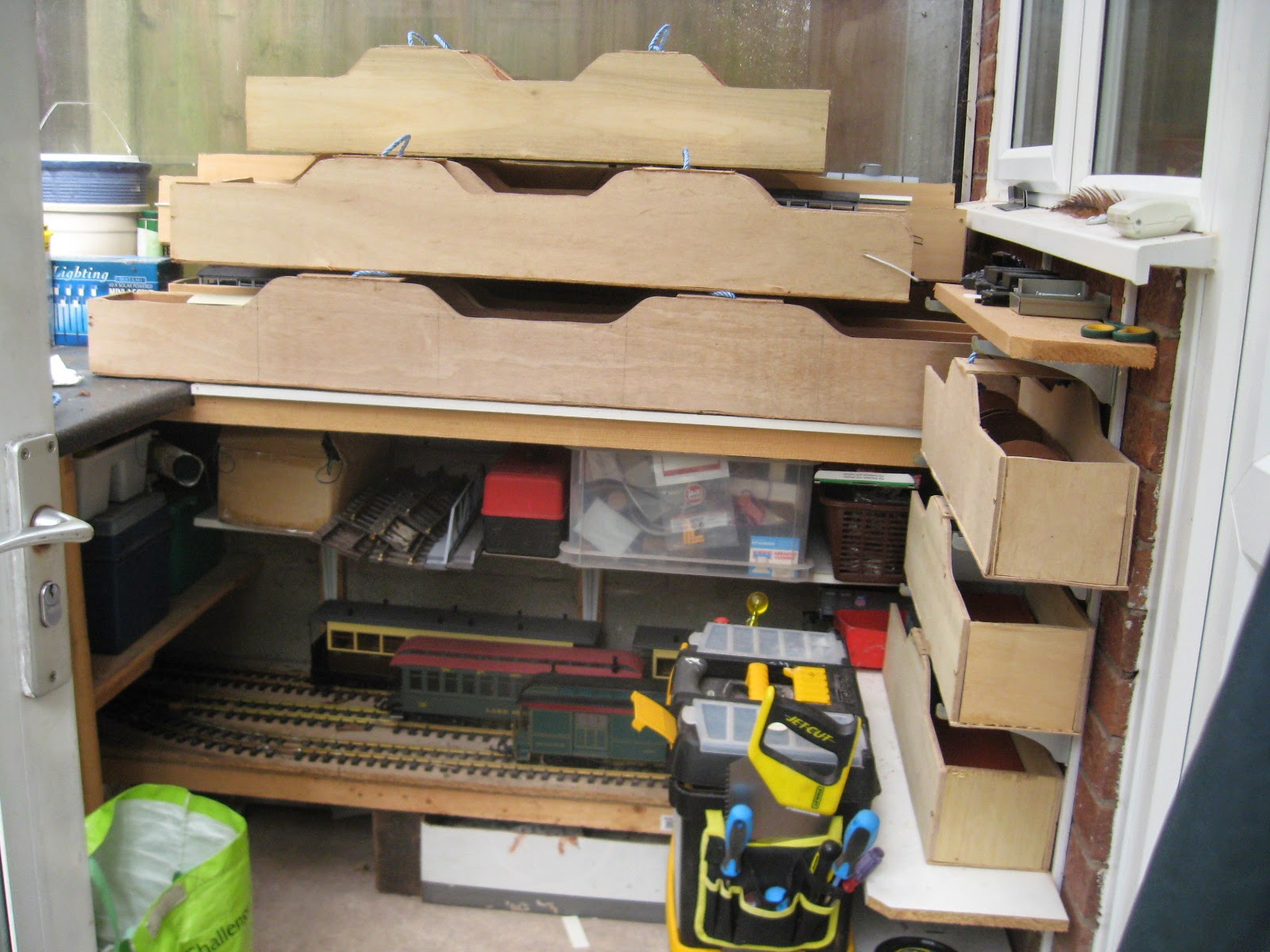 The other is under the workbench at the back of the garage. 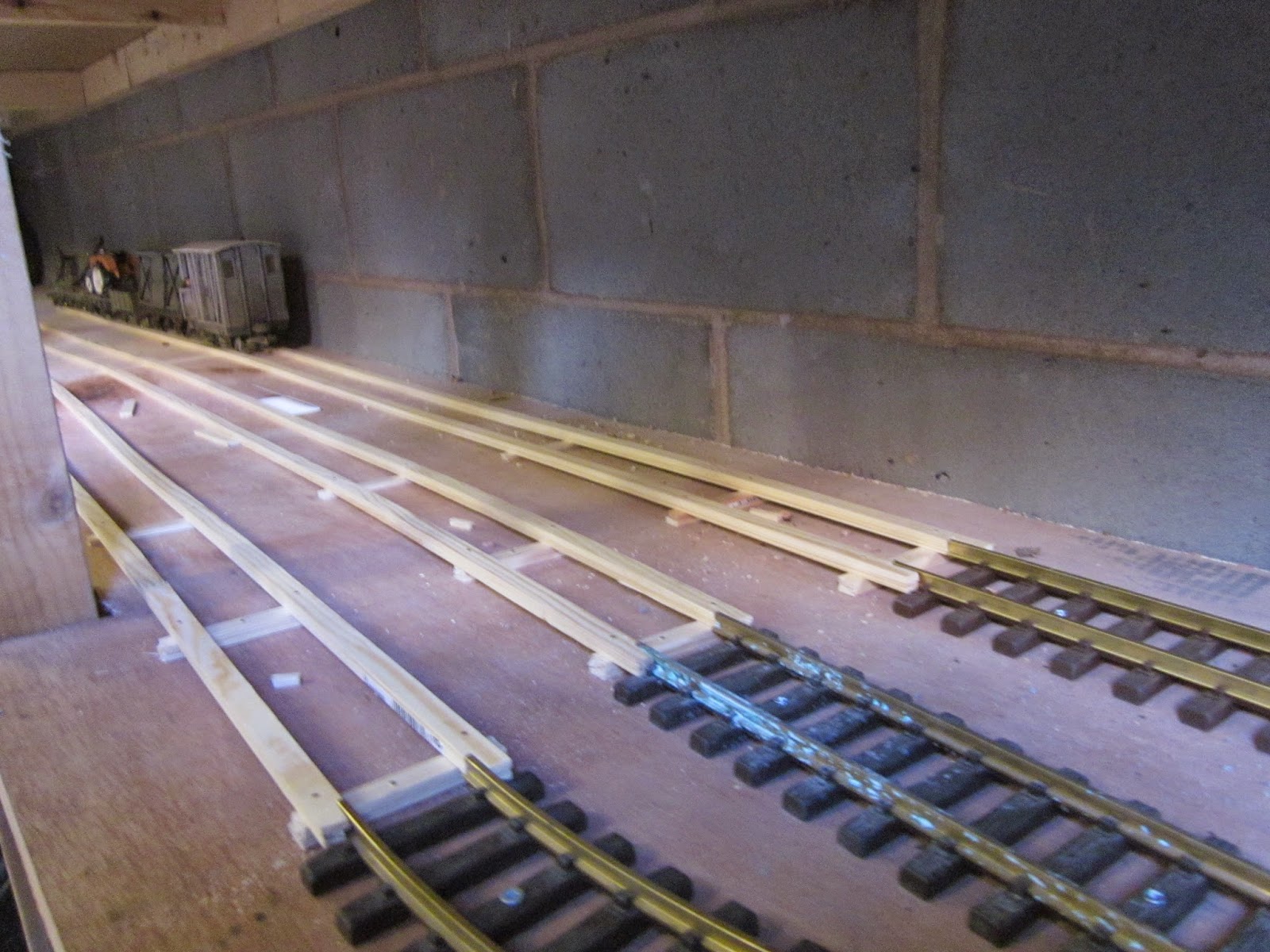 Because all my locos are battery powered, I saved cash on track in the garage by making wooden rails. 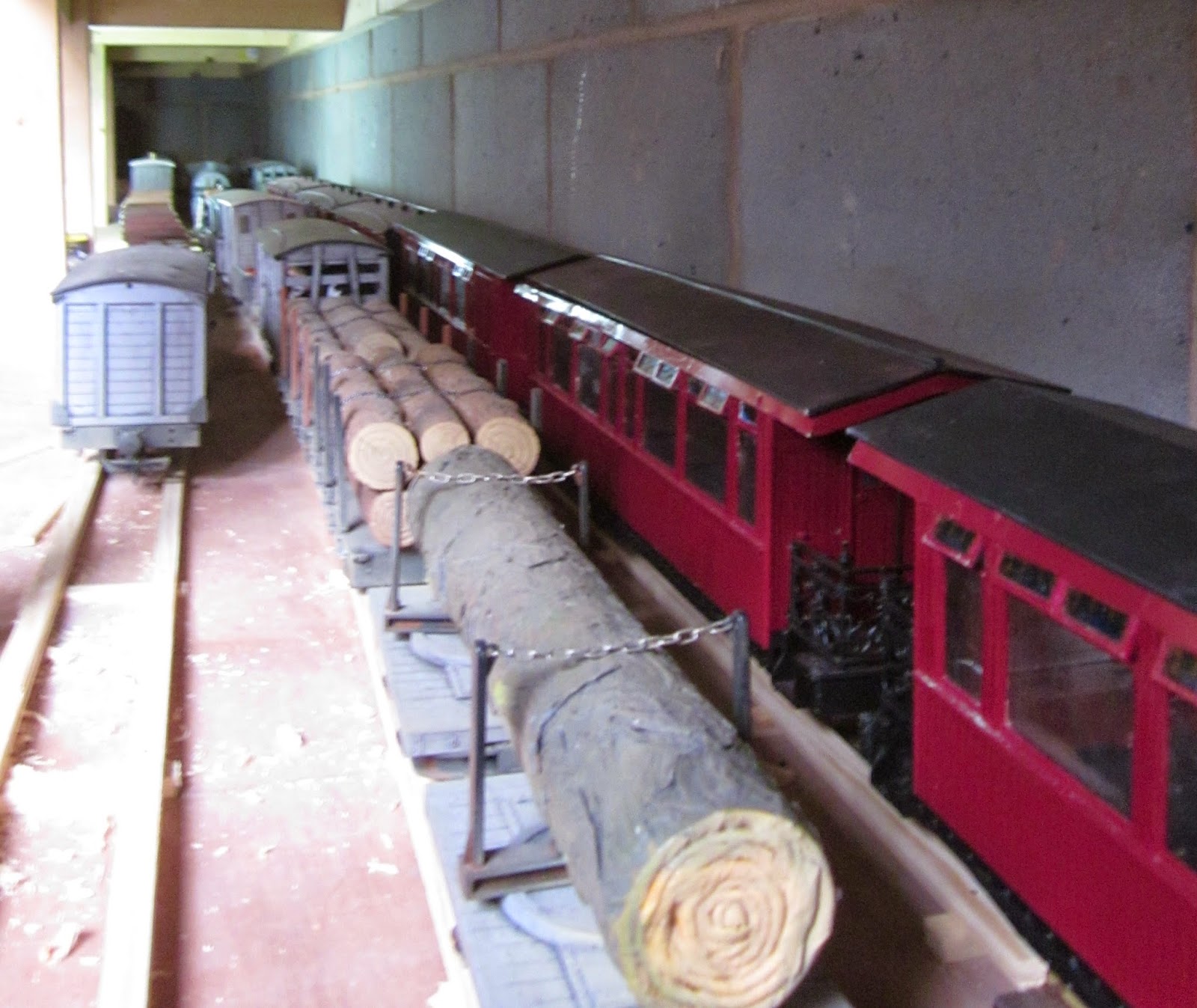 The train flap into the lean-to doubles as a catflap

While the one into the garage is just a wooden flap. 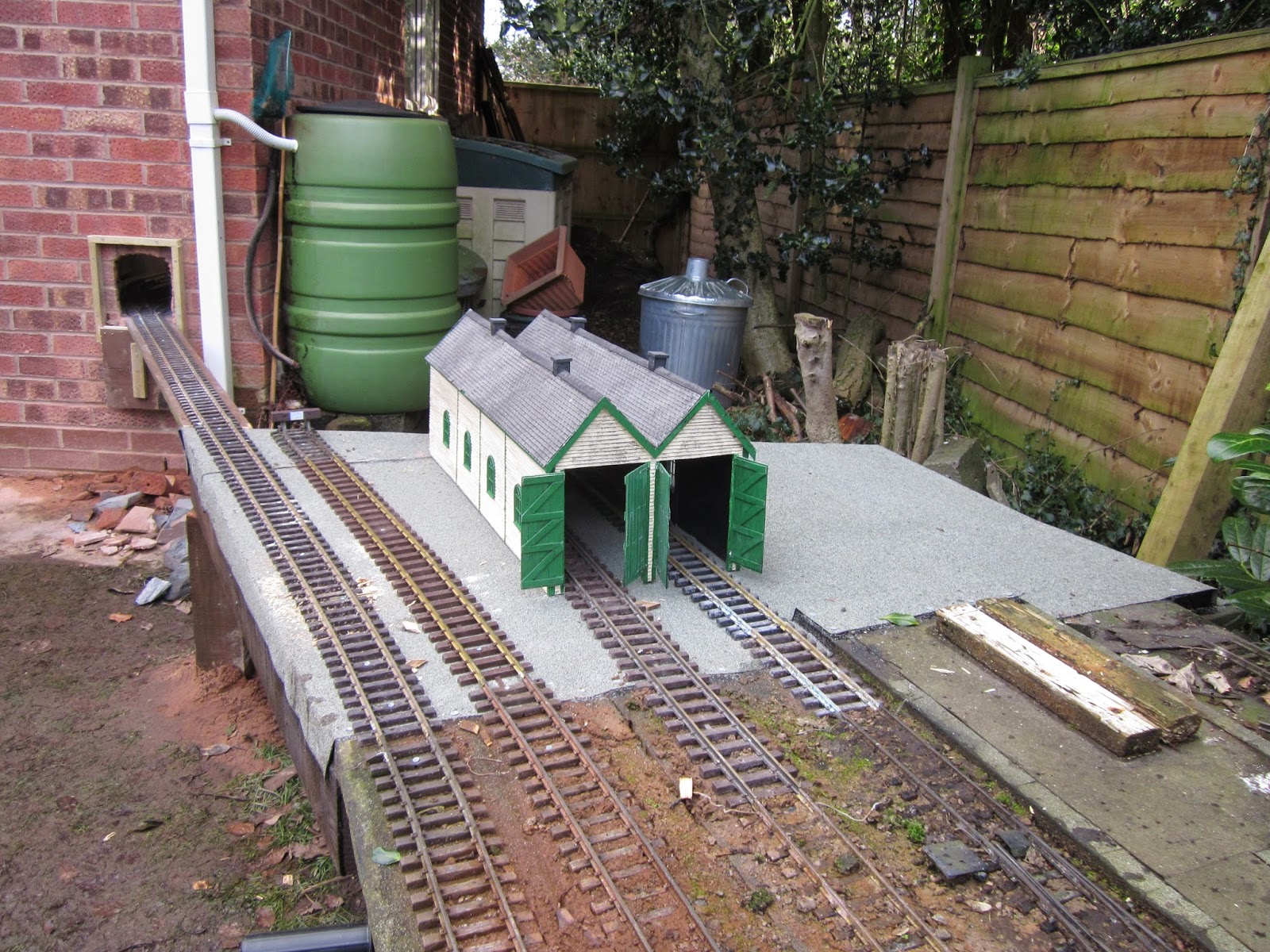 How I built some storage roads in the garage

For about the past five years I have been storing my stock in boxes which I have carried in and out of the leanto (see How I made some stoc...

Rik,
The photos won’t open but i could see the shed in the last link. Nice idea there.
Dan.

Derailed said:
Rik,
The photos won’t open but i could see the shed in the last link. Nice idea there.
Dan.
Click to expand...

Sorry Dan - I was trying to be clever and reduce the size of the photos after I'd posted them. I've now re-attached them as they were - hopefully they won't spill off the page.

I used to carry the stock in and out of the garden using the storage boxes you can see in the first photo. There was a box for each of the sidings on the railway - the idea being that at the end of a session I could push the contents of each siding into the relevant box and then at the start of the next sessions, re-instate them and carry on from where I left off.

Unfortunately, I slipped a couple of disks in my neck and carrying the boxes in and out, particularly swivelling them to get through the doorway, became agonising so I was forced to make the storage sidings in the garage.

I'd say it takes me a little longer now to deploy the stock as, instead of carrying them to their destinations, I shunt them - usually with a couple of very long goods trains at the start of each session. I suppose it takes a bit longer because the storage sidings are at the ends of the track. If the storage sidings were nearer to the middle of the track, it would probably take a bit less time. I actually quite enjoy the deployment process, though, and I'm sure the stock suffers less by not having to be handled.

I made a speeded-up video showing the setting-up process, including the deployment trains, which might be of interest.

No wonder you hurt your neck! - thrashing about like that!!!