Ok. Which is the better coupler: Kadee #907 knuckle coupler,or LGB #64193?
I have installed the LGB #64193 couplers on the tender of my LGB #23191 moguls' tender,#4175 Queen Mary Drovers' Caboose, and my Piko Camelback 0-6-0 actually came with them installed on the pilot of the locomotive, and its' tender as well.
The LGB #64193 couplers seem to hold very well,but are more expensive than the Kadee #907 knuckle coupler that I'm considering changing the remaining locomotives, and rolling stock over to.
My only real considerations are the couplers staying locked ,and price.
I've found the LGB #64193 couplers for $12.99 per pair on a website(plus shipping),while the #907 is $9.75 per pair. More than $3.00 cheaper than the LGB couplers, but are they a better choice ?
I used the Bachmann Knuckle couplers for years,but they always let go, and cause problems. So, I switched over to their hook and loop couplers(and later Aristocraft hook and loop couplers as well).
They do the job very well, but can be a minor pain to unhook. And ,they're not authentic to American railroad operations ! Hence my desire to convert over to a style of knuckle couplers for my G Scale trains that will not let go, but are easier to operate and uncouple when the day is done.
So, who likes which one, and why?
Later !
Andrew
Last edited: 11 Jun 2020
F

Go with the Kadee's….but, as always; others will have differing opinions.
I've been using the Kadee Large scale couplers ever since they were first produced, and have never looked back with any regret. I even use the smaller of the two available, but then our track, and roadbed is very stable. We use the body mount version on all rolling stock, of over 200 cars.
The first locomotive I applied Kadees on was the original LGB Mogul, even changing its original cow catcher to accommodate the Kadee front coupler application.
We have just gone through a bunch of Bachmann Annies (10 wheelers) being changed over to Kadees on the pilots. All is well. Good fortune on your decision...have fun.
Expand signature
Sir Frederick James Percy Mills

Without doubt if you can face swopping out and facing the costs KD would be the coupling of choice, looks good operates well and for US and even some European Narrow Gauge lines just the thing. To my surprise the other day watching a French Light Railway Narrow Gauge Vid, lo and behold what were the couplings? Yup full sized KD.
Expand signature
JonD Dunnyrail East German Harz NG circa 1981 in Cambs. Link to my Railway Build A new Railway is Started - G Scale Central Dated vid of trip on my line mihi necesse est optimus

A mate of mine with a lot of American LGB has fitted Kadee's to nearly ALL his stock.

From what I remember, only his Santa Fe coaches still had hook & loop couplings....
Expand signature
Gizzy, CME of the Logs, Gravel and Bricks Railway...

I thought it over. I'm going with the Kadee #807 Centerset coupler when/if I decide to change over from hook & loop couplers to knuckle couplers.
LGB is god, but big,ugly, and expensive! LOL
F

I second: good advice! Thank you Fred.
I'll be ordering directly from Kadee's website sometime in the not too distant future.

Kadee couplings are excellent. Shop around Kadee website is a bit more expensive then some of the train shops RLD or Reindeer Pass have had some of the best prices lately. I just ordered 10 more pairs. I also have converted most of my rolling stock. Kadee height gauge is a fantastic tool to have around when converting wagons. It has a height gauge and a gauge for checking your wheel gauging as well. Also did I mention it also has a track gauge built in.
I am looking for some LGB link and pin couplings if anyone has some sets laying around.
Z

It seems to me from reading the comments that if you go with the LGB coupler, there is one kind and you install with no modifications to the rolling stock. The Kadee couplers have different choices to use and have to be height adjusted. And I am not sure of any modifications to the rolling stock. It appears the Kadee couplers are more complicated.

LGB does not have a universal kind that always takes no modification. No one does except for the couplers supplied by the manufacturer with the model.

BUT that means nothing, since manufacturers have not standardized coupler centerline height among themselves, so no guaranteed interoperability.

Kadees work best when mounted at the right height, and they have MANY mounting kits to do that for you. Many manufacturers like AML, USAT, Aristo molded mounting pads at the right height for Kadees to bolt right on. You have the options of truck or the preferred body mount.

So, no offense, but you seem to have it backwards, and you might try some first and get some experience with them. I do indeed speak from using them for many years.

Thanks for the information, that is why we read these forums to learn about things we do not know. I assumed wrong in my thinking that a LGB knuckle coupler made by LGB would fit on any LGB rolling stock, without modification. As far as Kadee goes I saw a two page catalog once and told myself I would not know which one to buy, even if I did want to go with the Kadee.

LGB couplers might fit most of the LGB stock, but the OP has LGB, Piko and other rolling stock, so he is looking for a common denominator.

Actually, on the Kadee site, there is a list where you look up what rolling stock you have, and it tells you which coupler or adapter kit.

that is about as simple as it can be.... they have improved since those days of the catalog with seemingly hundreds of numbers

i use k d ,s and have been very pleased with them

I did the research using the link that Greg helpfully provided. It looks like the closest thing to a "universal" Kadee coupler that will fit the majority of my rolling stock, and most of the locomotive tenders, is the #831.
Now, I'm still a little confused over which height gauge to buy, since there is several choices listed.
So, which one will best fit the bill for my situation? I was thinking probably the #880 .
Please keep in mind that I own various cars from Aristocraft, Bachmann, Delton, Kalamazoo, HLW, LGB, and Lionel. My locomotives are made by Bachmann, LGB, HLW, and Kalamazoo.
I also have 3 Lionel locos. Kadee no longer makes couplers for them, but I found a new pair of Kadee #795 couplers on Ebay for about $13.00 after shipping.

RkyGriz said:
I did the research using the link that Greg helpfully provided. It looks like the closest thing to a "universal" Kadee coupler that will fit the majority of my rolling stock, and most of the locomotive tenders, is the #831.
Now, I'm still a little confused over which height gauge to buy, since there is several choices listed.
So, which one will best fit the bill for my situation? I was thinking probably the #880 .
Please keep in mind that I own various cars from Aristocraft, Bachmann, Delton, Kalamazoo, HLW, LGB, and Lionel. My locomotives are made by Bachmann, LGB, HLW, and Kalamazoo.
I also have 3 Lionel locos. Kadee no longer makes couplers for them, but I found a new pair of Kadee #795 couplers on Ebay for about $13.00 after shipping.

My go to coupler for most of my rolling stock has been the 906r body mount I have used 907 and 905 on my locos I have bought a few offset couplings only to make height adjustments on my locos. On bachman rolling stock I found I had to cut out a little bit of the bumper to fit the coupling. You can use the sharp end of the height gauge to mark this out. I made shims out of hard wood to set them up with. Best thing I did was go to body mount I have R3 points and don't have to many problems.
905 couplers work well on most of my locos You can buy couplers only with different offsets to alter the heights eg 909 Kadee 1700, 1701 and 1710 for nuts bolts and washers Also 941 gearbox shims if you don't want to make wooden shims and a 2-56 tap to make threads into the plastic where needed Kadee also sell that to. Start on your least valuable wagon first Once you do a couple you will find it pretty easy I got it down to an hour to change couplings and wheel sets on each wagon.
Click to expand...

As far as which coupler gauge to use...there are two. You should purchase the gauge for the line of couplers you have chosen.
The small "#1 scale/gauge couplers", or the "G" gauge couplers".
You mention the #831 couplers. They are one of the variety of G gauge size couplers.
Anyone can go to the Kadee Coupler web page, by simply googling, "Kadee Couplers".
The two sizes of Kadee couplers will couple together, but it is best to stay with one size, and not mix them.
You will notice that the Kadee coupler gauges have two ends. One end has a coupler mounted on it at the correct height. The other end, sometimes called the "Anvil End" gives you the correct height on the underside of the underframe of the wagon you are "Body Mounting" a coupler to.
Body mounting couplers is another story. Some people know that it is more prototypicical, but requires a bit of work in most cases.
Truck mounting is les work, and seems to be chosen by most who do not involve themselves iv true railway operations.
The choice of course is always yours. No-one is ever telling you which method you have to use.
Have fun. Kadee Couplers can be of assistance in having good running experiences.
Expand signature
Sir Frederick James Percy Mills

I think the question about which gauge to use is there are TWO gauges for the "G" gauge couplers.

There is the original, and the "type E" styles. Go with the newer "type E", the coupler spring is more protected and the coupler just looks better, and it is a bit stronger (most people going for the world record length train are using Kadees).

There are basically 2 mounts, one where the couple end is a hole and it pivots, and the other "slack action" one that give a more realistic imitation of the movement of a real coupler in a real draft gearbox.

All the other variations are mounts for these couplers... that help you mount the coupler without any or just minor modification to the rolling stock.

The 907 type is commonly used:

The slack action 906, that is normally only used on freight cars: 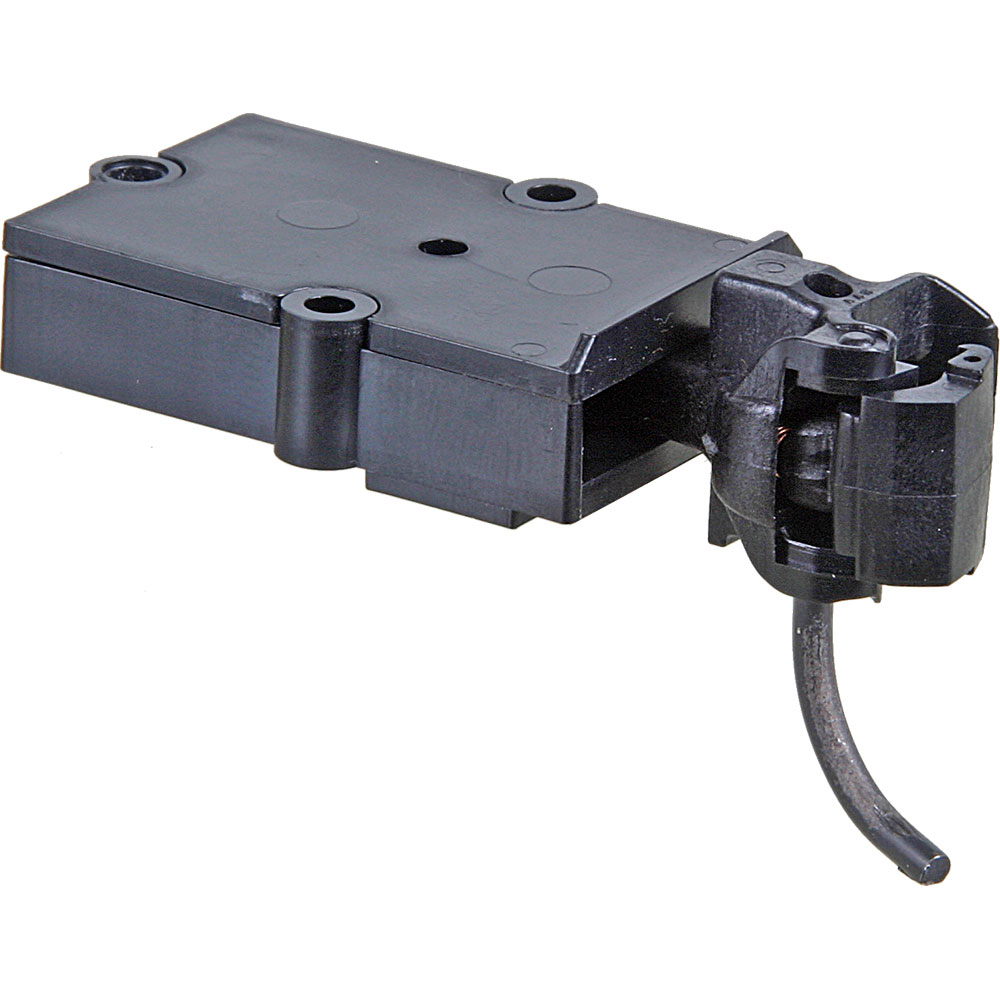 Also, the practical difference between truck mount couplers and body mount is basically body mount looks and performs better unless you are running REALLY tight curves, like R1.... I am all body mount.