Hi everyone,
I'm thinking about re-doing the track over my upper bridge on my Garden Railroad, and im wondering if this sort of automatic turnout control would be possible:
The trackplan is a simple loop-to-loop, with two turnouts and a single track across the center:

I have LGB turnouts with LGB electric turnout motors. (I have never powered them up.)
I know "automatic reverse loop" circuits exist, to change track polarity and flip the turnputs, but im looking to power the turnouts *only*.
The track will not be powered!

This is a battery-power only loop, no electricity to the rails.

I do have electricity at the railroad, to power a pond pump, and etc. I could provide a power source for the turnout motors.

So, there is no track power for this loop, I would like to power the turnout motors only.
So imagine both turnouts are set to "straight", a train runs across the straight middle section toward the left side loop,
it circles around the left-side loop and comes back toward the turnout: some sort of sensor then detects the locomotive: both turnouts then trip.
Now both turnouts are set to the "side" track. Train crosses the straight section again, now loops around the right side loop,
a second sensor then trips both turnouts again back to the "straight" configuration.... Repeat.

So each loop would need a sensor, and each time the turnouts trip, both would trip together.
So, can this done with LGB turnout motors?
If so, is there already an LGB device that would do the job? Or could I build something?
I'm mildly fluent in electronics, if I had a plan I could probbaly build it..
thanks!
Scot

it can be done easily.
the LGB epl system does it.
you use a 16V (or better) AC source, two contacts (reed contacts) (17100 is the part Nr. if my memory is correct) a magnet below each loco to run there and the two point-motors.
the reed contact in the right loop impulses both point-motors for straight, the one in the left loop sets both to curve. done.

if you take a read here, you will see the details.

http://kormsen.info/lgb-manual.pdf
page 122ff. (running on battery, just leave out the reverse-current part for the rails)
Toggle signature
Grossbahn - largetrains - largescale modeltrains layout - IIm Modellbahn Anlage
- We build for eternity, so why should we hasten?

Thanks Korm! That looks promising.. I cant quite tell from the .pdf which circuit I want to concentrate on though.. is it "Circuit 10: Fully Automatic Reversing Loop" ?
Just without the track leads?
Thanks,
Scot

no.
that shows the switching of DC-railpower only.

look at the second pic of No. 9 think away every red or blue wire and the 1015 Ks and Ts. as well think away the add-on switch that is coupled to the pointmotor.
what is left shows how to set up one point-motor for automatic use. (remember to put the 17100s at enough distance from the point, that even the longest train has cleared the point, before it gets switched)
then you make the same set-up for the other point.

in the pic you see, that the 17100s have two "out" connections. (marked by orange triangles)
one 17100 of each pair needs to use the outwards pointing triangle, the other the inwards pointing triangle.
(as that system works with "half AC", one will move the pointmotor to the left, the other to the right) ((if they turn to the "wrong" direction for your wishes, just change the outputside on both 17100s))

are you daring and want to save money?
1) you can use magnets from an old computer harddisk instead of the originals.
2) and/or you can connect both pointmotors to the same two 17100s.

with "2)" you might get problems to switch both points to the desired/same side, or they might not switch completely over, or you might burn ot the 17100s. (specially, if your AC source is on the weaker end)
(i do it that way, but as i'm building my own 17100s, for me it's just cents and some time to replace a 17100 - not to speak about the chance to see some spectacular crashes, when a 17100 fails....)
Toggle signature
Grossbahn - largetrains - largescale modeltrains layout - IIm Modellbahn Anlage
- We build for eternity, so why should we hasten?

If you are always running in the same direction.. You could just use sprung points.. - No electronics!

Thanks Korm! I think I get it now.. i'll update this thread as the project moves along.


PhilP said:
If you are always running in the same direction.. You could just use sprung points.. - No electronics!

I already tried that, it wont work in my case:
Start at 2:20

So because my upper loop is going to be only my steam locomotives, i cant use the spring. I currently have two parallel tracks side by side, but that isnt working due to clearance with my new arches!

so I need to go back to a single track across the bridge.

So you will need to detect when the whole formation is within the loop.. - Are your formations of a length that you can have a single detector in the middle of the loop?

You could just use interlaced track. It’s prototypical and not many people have it on their lines. You could mock up non functional catch points to protect the interlaced section.

Many people have succeeded with a steam pilot truck by adding weight to the truck, not a spring.

you can use a lighter spring for the switch too, although it means maintaining a low friction situation, a bit more maintenance, but your track is raised.

So you will need to detect when the whole formation is within the loop.. - Are your formations of a length that you can have a single detector in the middle of the loop?


Eeyore.Boater said:
You could just use interlaced track. It’s prototypical and not many people have it on their lines. You could mock up non functional catch points to protect the interlaced section.
Click to expand...

Ive considered that! a gantlet / gauntlet / interlaced track would definately solve the problem..
but it would still require a frog on both ends.. I dont have any spare turnouts to canabalize, so I would have to scratch-build it..
doable! but would probably more challenging than wiring up the electronics for the two turnouts!

Where the tracks cross is the same sort of frog used in a normal turnout.
So its a challenging bit of track scratchbuilding..

Although, here is an interesting variation on the theme, I came across this online a few hours ago:

hmmmmm! That has promise. I'm going to go out and play around with track as soon as I post this..


Greg Elmassian said:
Many people have succeeded with a steam pilot truck by adding weight to the truck, not a spring.

you can use a lighter spring for the switch too, although it means maintaining a low friction situation, a bit more maintenance, but your track is raised.

yeah.. that's also a possibility, but my least favorite option right now. I have five steam locos, all with front pilot wheels, it would be a hassle to try to
make them all work with a spring switch..I've already explored that route, it just wont work for me.

I'm really into the "3-rail" idea.. the small photo above. More to come! If I end up going that route, I'll make a new thread..

Scot,
If you do go that route.. Your line will live 'forever' on the Internet..

Looks very "do-able", go for it!
Toggle signature
Visit my web site for information, tips, how-to's www.elmassian.com or email me at greg@elmassian.com
P

I vote for the interlaced! I'd never seen it before - talk about unique. Although the three rail pretty neat too! look forward to whatever you choose.
Toggle signature
Phil S

phils2um said:
I vote for the interlaced! I'd never seen it before - talk about unique. Although the three rail pretty neat too! look forward to whatever you choose.
Click to expand...

Many Tram Systems have sections of Interlaced Track and it was used on mail line Railways of old, though never seen any myself except in pictures.
Toggle signature
JonD Dunnyrail East German Harz NG circa 1981 in Cambs. Link to my Railway Build A new Railway is Started - G Scale Central Dated vid of trip on my line mihi necesse est optimus

if you want to run the gauntlet....

to build the "joiners", you'll have to sacrifice one crossing and two curves. take a look here: Truss Bridge
Toggle signature
Grossbahn - largetrains - largescale modeltrains layout - IIm Modellbahn Anlage
- We build for eternity, so why should we hasten?

I like the "no frog" idea, takes a bit more width, but definitely more reliable.

Update!
The clearance issue for the bridge has been resolved!

I have *not* gone with the automatic control of two LGB turnouts, which was the topic of this thread..
If you are reading this thread for that topic, please see posts 2, 3 and 4 in this thread for the solution to that question.
I will create a new thread for the method I ended up using.. New thread to be posted later today, in 6 hours or so..
meanwhile, here is a preview: 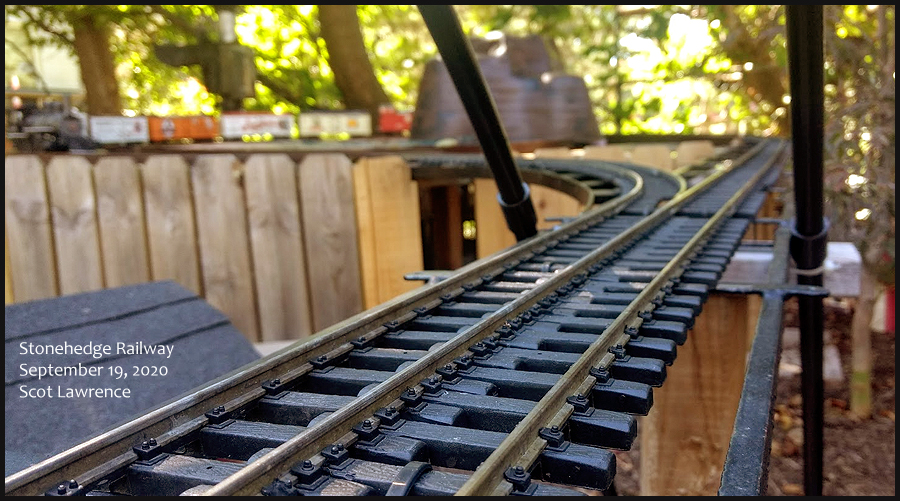 Much more detail to come!

I'll put a link to the new thread here once I create it.

Clever! just rethreaded one rail into both sets of ties!
Toggle signature
Visit my web site for information, tips, how-to's www.elmassian.com or email me at greg@elmassian.com

Now I was going to say:
"Pity the poor Ganger, working the middle rail!.." - All those chairs! Forearms like Popeye, by the time he was done..

Building a Gantlet(ish) track for a narrow bridge.

My new "three rail" track over my bridge! :D This thread is an off-shoot of this thread: https://www.gscalecentral.net/threads/automatic-lgb-turnout-control-circuit.315520/ But I ended up not using the LGB switches at all, so instead of continuing that thread, I thought this warranted a...