Trams made in Wuppertal / G scale

Both models with decoder. work tram has head and backlight, breaklight and indicat direction indicator.

Problem was that the light dimming was too strong, so that in day light we couldn't see it. ,

And the breaklight commin up on the trailer, when the tram "breaks", but than the light went off and come back when stillstand.

The passengers area had got lights.

It was a lot of fun while the weather was nice.

Düsseldorf 2308, drove in March 1957 for Tets purposes for a few days in Wuppertal. In this condition I have rebuilt it.

Düsseldorf 2308, on the new, not yet finished bridge.

Finally, mine and my friend's E1 on the layout.

My new E1 on the new turnout.

A level crossing had to be milled on the way.

Both E1 meet for a locomotive traction.

The four-axle vehicle with its trailer was the wagon with the widest radius, and it also had to get on the new tracks.

Another one on the left. Nuremberg 809, digital on test drive.

The camera technology failed during the night drives, it was too dark.

Love to see these Tram pics, certainly do not look out of place on R1 curves, they were made for Tram Layouts.
Last edited: 16 Feb 2021
Toggle signature
JonD Dunnyrail East German Harz NG circa 1981 in Cambs. Link to my Railway Build A new Railway is Started - G Scale Central Dated vid of trip on my line mihi necesse est optimus
P

That looks like a great day out and that layout is really something.

Hi friends an other tram goes to the final finish during covid 19 times.

My Wuppertal tram 221 had a testride with all the lightning functions. As it is inner lights, head lights, rear lights, breaking lights and direction indicators.
And now...I need your help. What would you do? The original indicators hadn't had blinking lights, only a rted bulb.
For me they looking much better, when they are blinking. so what? Please vote for me, what to do?

I vote for blinking.. - It tells other drivers which route the tram is taking. - That is if your trams travel on shared roadway?

PhilP said:
... That is if your trams travel on shared roadway?
Click to expand...

I think it becomes a traffic rule before WWII. We do have pictures, where you can see trams with this indicators. Normally our trams running on streets like cars do. Sometimes in the middle. So when a trams stopped at a tram stop, the driver uses the indicators as well. The old two axle tram in WUppertal had until 1987 only red bulbs, no blinking ones.
Toggle signature
Peter Bosbach - Wuppertal - Germany

I vote for blinking as well. I have no idea if it is prototypical but it looks interesting.
Toggle signature
Dave Miller a.k.a. idlemarvel

I reckon the 'back-story' would be:

"The tram was returned to the works, for some restoration work, and to comply with up to date legislation, the flashing indicators were added at this time.."

Great tram, and blinking gets my vote

First, thank you for your votes. The tram has now blinking indicators.

During lockdown and up to autumn holidays I worked on my own tram to make them more detailed. The tram above (221) awaiting lettering and than it is ready. A sister model, more than 36 yearsd old, gets a refreshment, with more detailed interiors, new led ligths and a better decoder.


My friend Wilfried is building a new trailer for his trams. I was able to convince him to build a more original trailer. That meant using a lgb tram trailer and change it into a Wuppertal trailer 429. We had at first only a very small picture from a book. Another model maker heard that we wanted to build the trailer and was able to give us better photos. Unfortunately I am not allowed to publish it like this for copyright reasons. 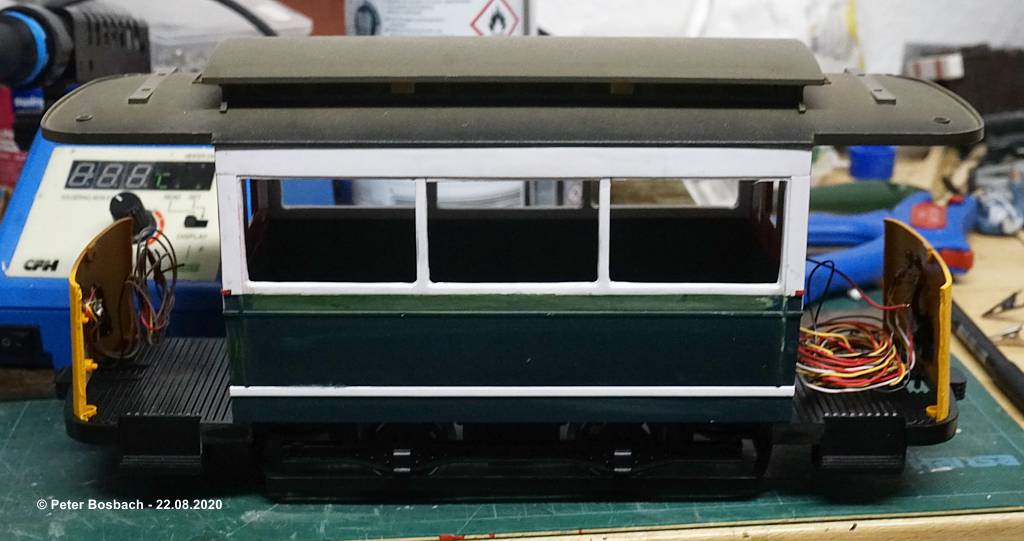 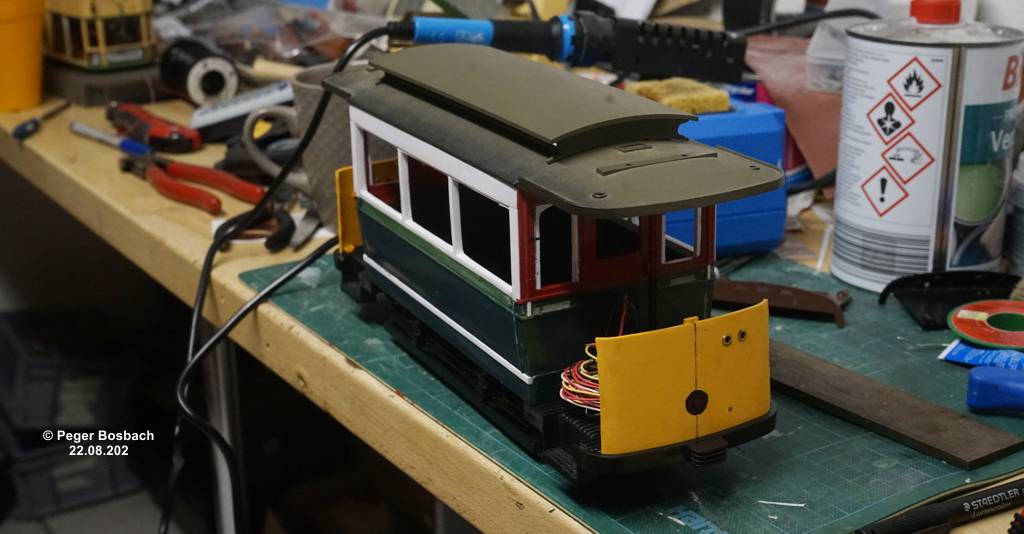 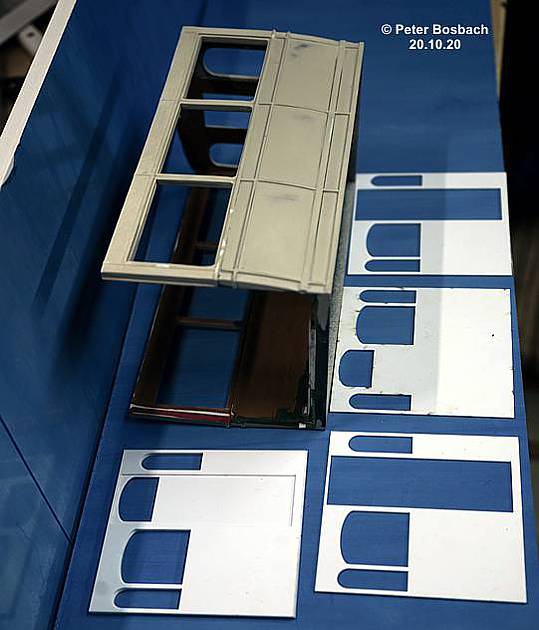 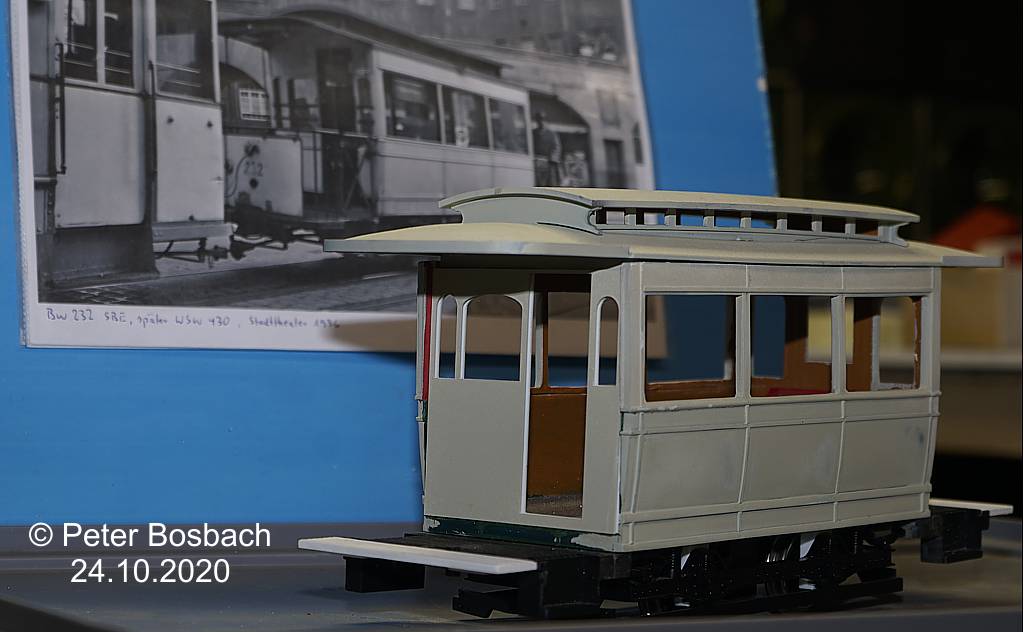 New for us is, that we used laser cutting a acrylic front part. It is not glued yet. Here you can see the primed model chassis.
Peter
Last edited: 25 Oct 2020
Toggle signature
Peter Bosbach - Wuppertal - Germany

Hello all, I changed the headline "Trams from Wuppertal" into trams made in Wuppertal. So I can show all my tram makes.

I finished an tram from Zurich / Switzerland. I was able to buy a tram that I had started and built myself very cheaply. I still had the missing parts, such as windows, pantographs, drive, axles and lighting in my pool. However, the lettering was faded and the colors were no longer correct. That was due to the fact that the model that had been started had been in the cellar for 10 years. So I started an internet search for photos, etc. I shouldn't have done that because I found missing details there. Large and small details were missing on the roof. A control cabinet also had to be reproduced in the rear part. The old lettering and advertising on the roof edge have been removed. I first built the route boxes on the sides, then I discovered a line number box on the doorless side. They were milled from a piece of plastic. and illuminated. Then I saw on the Internet that the driver's desk had more instruments than the previous owner had shown. Although I first had to break the arms and legs of a figure, I had to leave a woman on the steering wheel. I left the passengers with no other choice. You had to go with the woman. I had problems with the interior lighting. It cost me two simple decoders, which burned out. Unfortunately, I only found the error after four days. One was a frayed cable which caused a short circuit on the decoders. With the other mistake, I made a mistake of thought. I just had to twist the wiring for the opposite lighting units and the problem was fixed. Now all LEDs are connected.

Here are a few photos of the work.

Just a bit of fun.

I do like your models Peter, you pay such attention to detail, and clearly enjoy making and running them. Thanks.

schienenkönig said:
I had to leave a woman on the steering wheel. I left the passengers with no other choice. You had to go with the woman.
Click to expand...

schienenkönig said:
, I had to leave a woman on the steering wheel. I left the passengers with no other choice. You had to go with the woman.
Click to expand...

You're pushing your luck there mate

The trailer 429 is about to be commissioned. Test drives has already been done bravely. He is not yet allowed to use the regular service because two door gates are still being made in the locksmith's shop. (When I have other partsto be lasered.) 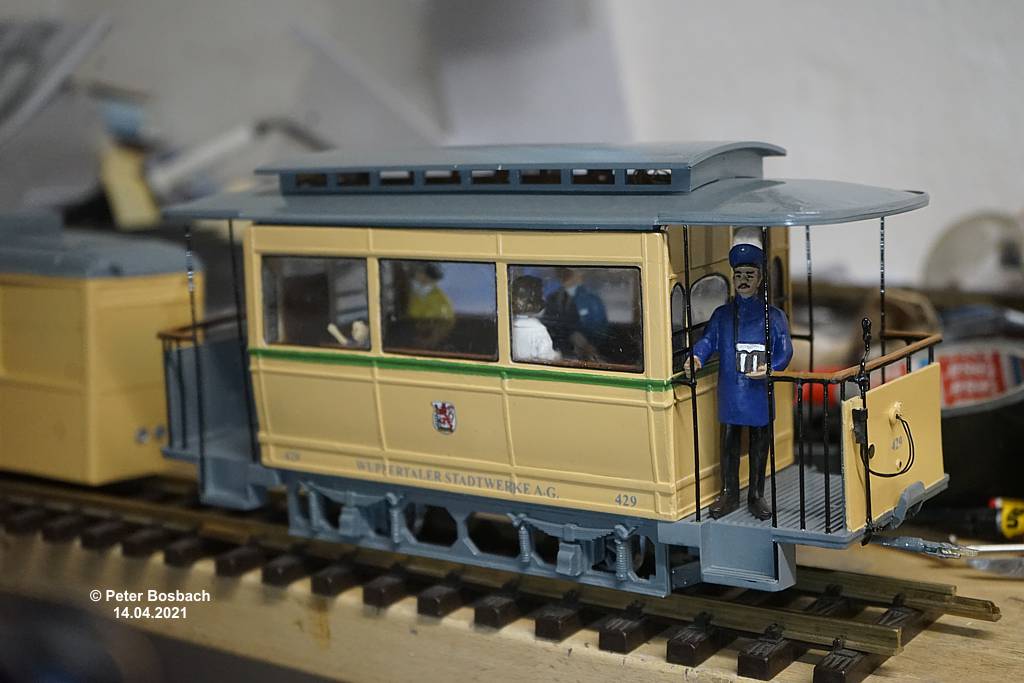 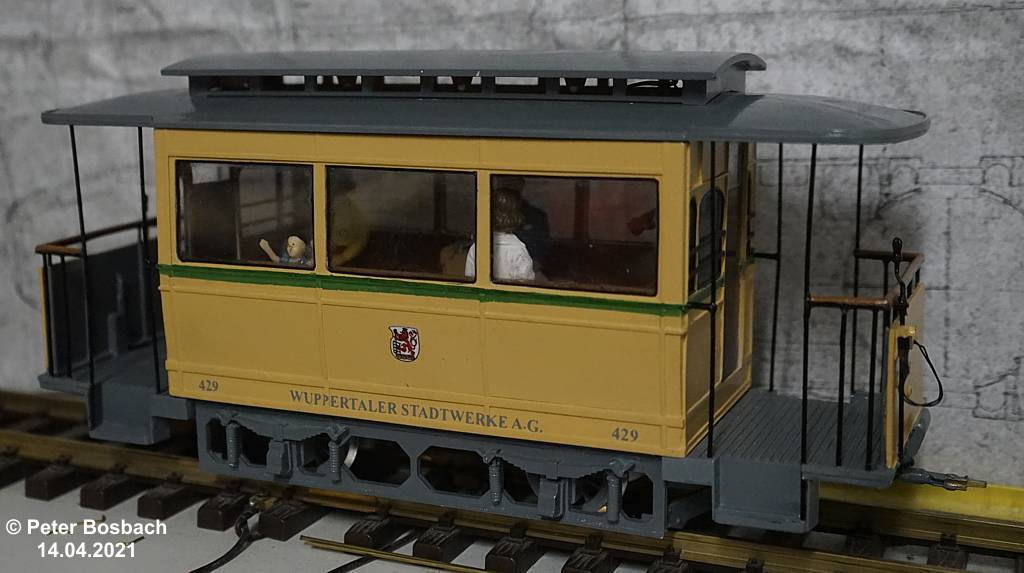 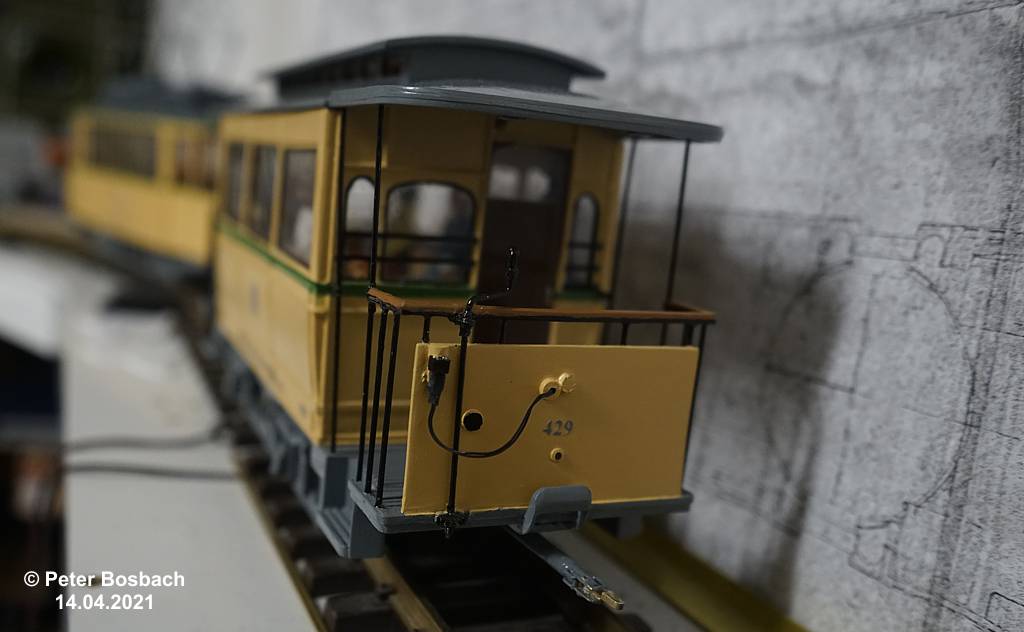 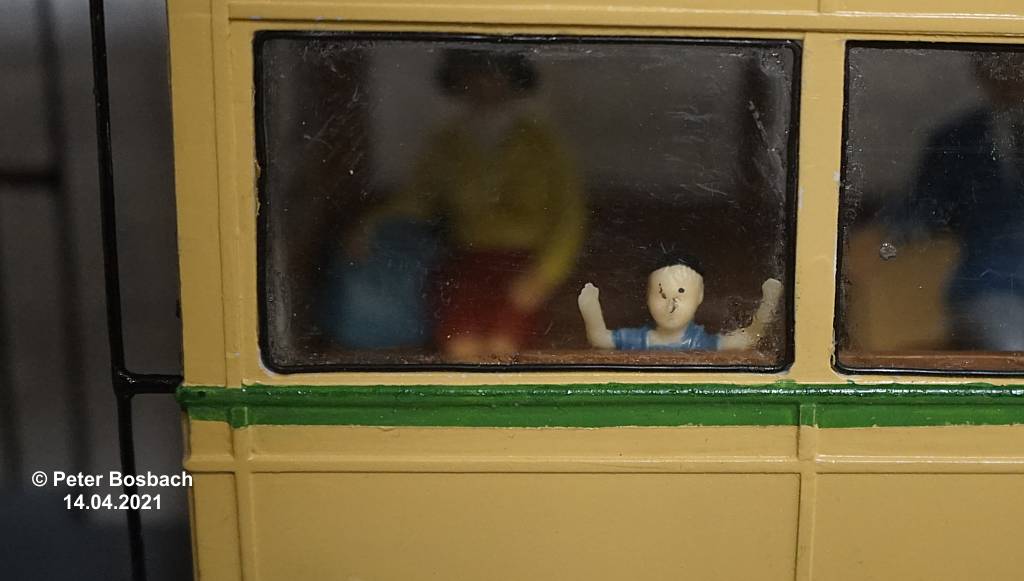 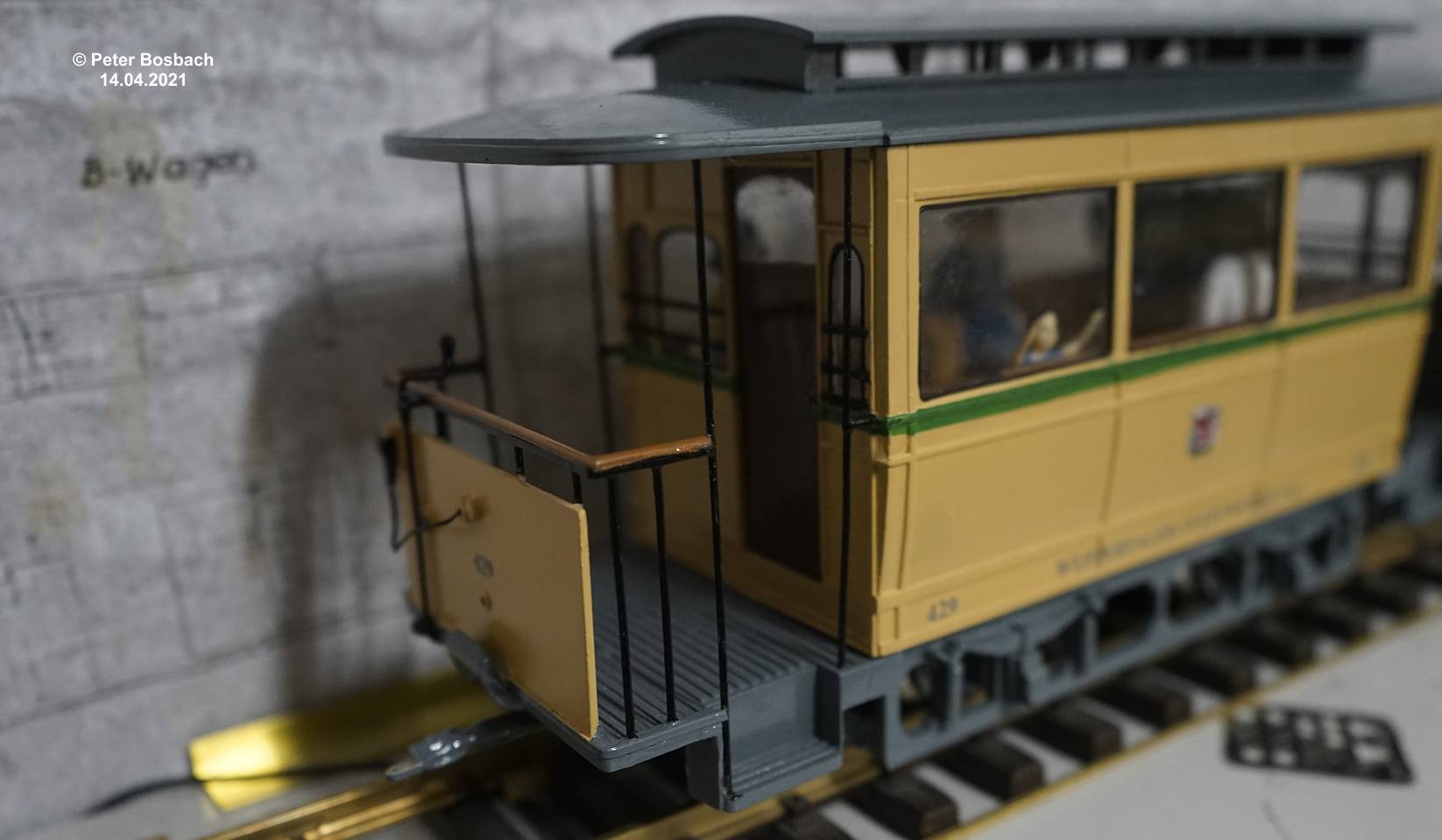 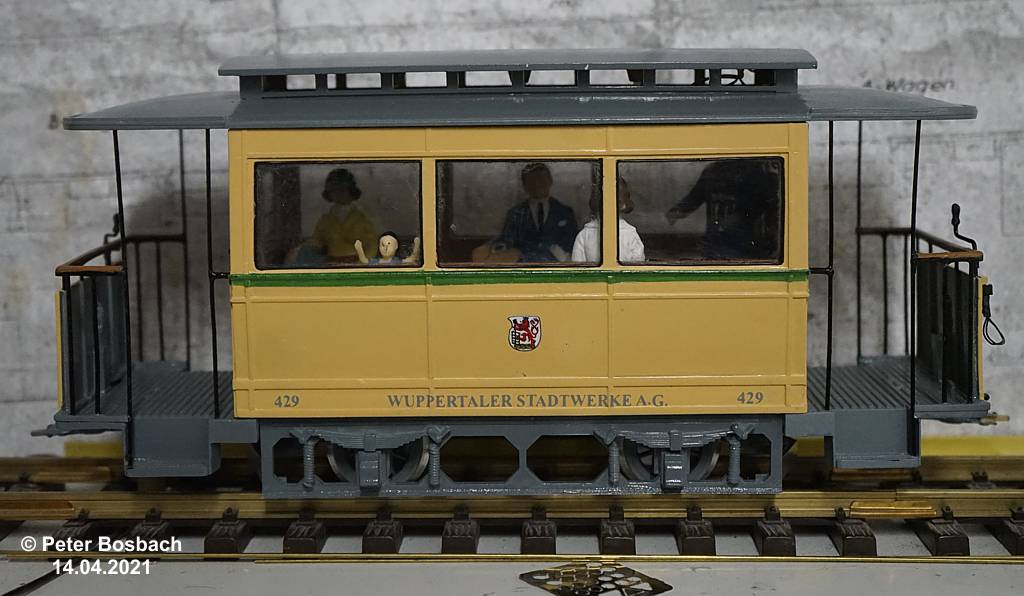 So now the exhibitions have to reopen, we're done. (Except for the door bars)

Next tram trailer:I've been building this car since October 2013. Uff! I can't say why it took so long. Somehow there was always something else to do. Now my friend Wilfried wants to take it over. Since we are slowly finished with his own trailer in lockdown, I can take care of the car.


I made the lamp holder based on the originals. The interior lighting is built in, brake and rear lights are attached to the front. Sockets and cable holders are still missing. The seats are also ready. I still have to make various handrails from 1mm brass wire.


When I painted the roof of Bw 429, I still had enough gray paint and so the roof of KsBw 532 was also painted. Yesterday the outer shell of the car, then the chassis and the underbody were painted. The buffers were created on a unfortunately imprecise milling machine and glued on. I also secured the buffers on the vehicle with replica rivets. 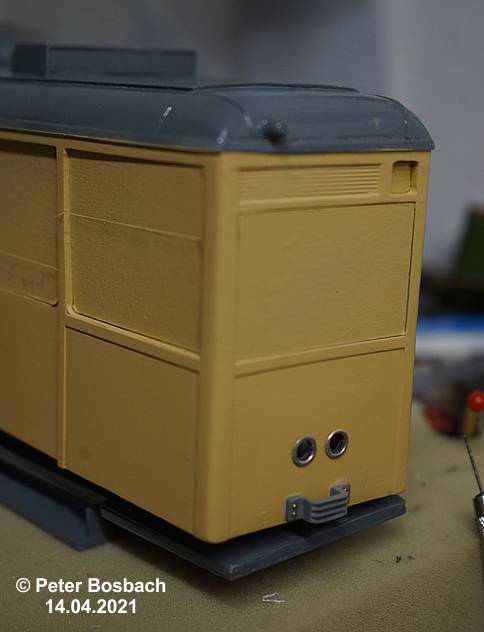 If the car has a rear-end collision on the layout later, the buffers are more likely to break and will probably no longer be able to tear off.

After a woman who had nothing to do with model making told me that a detail like the one in the photo was missing,

(and it was a great detail) we added it on Saturday. Now the trailer 429 is ready. Ok, two grilles as doors still have to be lasered.

Today the tram was upgraded electrically so that it can now supply trailers with electricity via the mechanical and electrical magnetic coupling.
All of my trams are still being retrofitted in this way.