Looking for something to build while isolating, it occurred to me that I had scratch built two South Australian locos in G scale (a class 500 diesel and a class YX steam) over the past couple of years but have no rolling stock for them to pull. So I decided to build a rake of Short Tom coaches (anything longer won’t go round a couple of my curves). The first, Pichi Richi second class number 74, is now finished in the attached photo.

I call it scratch building but it is more accurately described as kit building where you design the kit on your laptop computer before you build it. The majority of the coach is made of laser cut 1.5mm and 3mm clear acrylic. I draw it up using Corel Draw from plans and photos found on-line. The resulting files are then emailed off to a local company who cut it and post the bits back to me. Parts such as the bogie sides, steps, window shades and roof edges are drawn in Autodesk 123D Design and are printed on my $700 home 3D printer in ABS plastic. Then it is just the usual gluing and painting with Kadee couplers, passengers and steel wheels being the only purchased parts (or in my case came out of the spares box). Finally decals are drawn up in MS Word and are produces on my inkjet printer on decal paper.

If anyone else wants to build one I can send you the files…and yes they can be scaled.

Now on to coach number two. 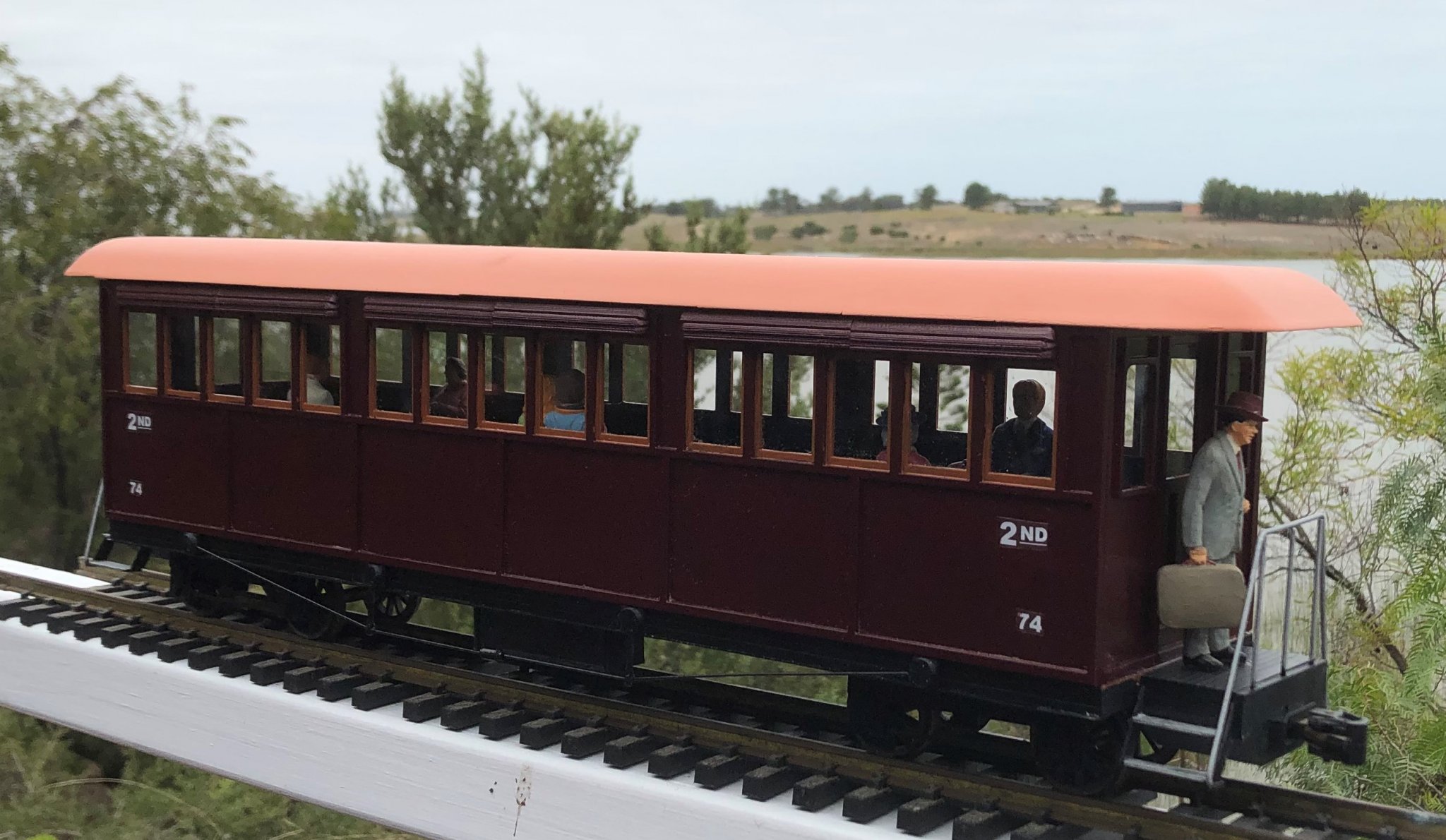 is that a young Barry Humphries on the rear balcony?
Expand signature
The Wild West Norfolk Route totters to its feet

Rhinochugger said:
is that a young Barry Humphries on the rear balcony?
Click to expand...

I thought it was the Australian Prime Minister? - No flowers!

Rhinochugger said:
is that a young Barry Humphries on the rear balcony?
Click to expand...

Neat looking 3'6" gauge coach. Nice colour too.
I think it's a young Sir Les Patterson clearing his throat from the observation platform.

Looks amazing Peter should match the YX perfectly! Ive got fond memories of riding through Pichi Richi pass in one on a trip to South Australia last year.

Tropic Blunder1 said:
Looks amazing Peter should match the YX perfectly! Ive got fond memories of riding through Pichi Richi pass in one on a trip to South Australia last year.

Any chance I could grab the files off you or buy two in 1:24?
Click to expand...

I can send you the files. Please email me at pjlucas@bigpond.com.