I went up to Glendale Junction to collect this Loco for my good friend Mike. He is moving soon to the West Country so it seamed prudent not to have it posted to his old House. As the move is a good distance feom Glendale I wondered if he would like me to give it a Test before taking it to him this week, the answer was positive so that has given me a chance to do this quick review.

What comes in the 3 boxes.
Box 1
The Loco, Instructions, Name Plates (unpainted and to be fitted) and Instructions.
Box 2
Contains the Absimm 2.4 Ghz RC with Binding Gear and Instructions.
Box 3
Has the Amtronics Smart Charger, this surprised and pleased me as these are a very good charger. This will charge NiHm and NiCad Batteries for those that are still in the dark ages Battery wise.

First job was to read the Instructions carefully then charge up the Loco. Instructions state quite clearly to Plug the Charger into the Loco before switching on the Mains. The roof is easily removable to facilitate this. Only other thing of note for using the Loco is the On/Off Switch on the Control Panel. This has a nice set of Dials and looks the piece. I never recorded how long the charge took, however it was nowhere near the 5 hours suggested in the instructions. Possibly around an Hour, but I was doing other stuff and never noticed the light change to green to indicate full charge. Perhaps these instructions were written before they started shipping the Amtronics Smart Chargers which do purport to be a fast charger as well as smart! Another thing to note about these is that they flash a Red Light once turned on, light then goes out and returns to a steady Red when charging. Green indicates charge completed. Something that needs to be watched as if it is not plugged in propery the Cycle will start and the Light go out and stay out. So remember to watch for that steady light before wandering off to do something else.

Out On the line now. Placed the Loco on the Track and then had to do a bit of faffing to get the Loco to couple to a Train. Mike had not thought to specify LGB Compatible Couplings, not sure if this is something that Roundhouse can still do.

Then I took an age to find out how to turn the RC Unit on. There is a lifting flap on top of the unit, not shown in the Instructions but is seen on the Box. Not good as it is possible that the RC might be sold on at a future date sans box. The RC needs 4 AA Batteries in a mounting at the base. The Trigger pushed Forward turns on the Motor Sound and pulled Back sounds the Horn. To be honest I am not impressed with the sound, but from memory it is pretty close to the real thing. Just that that is pretty insipid, I like my Diesels to sound like Listers or Alco's!

First pic shows her with 20 Metal Axles worth of Train. She started this little lot off with some slipping, got it rolling ok but came to a rapid halt slipping when frost on the Track was encountered. So the last 10 Axles were detached and returned to the Shed by Hand. Oh the shame of it. Still no go on the Frosty Rail so hand assistance was given to get her to where the Fost had melted off. Then a good run with the remaining 10 Axles was done as far as Silberhutte where I decided not to overtax a new loco too much and continued Light Engine. 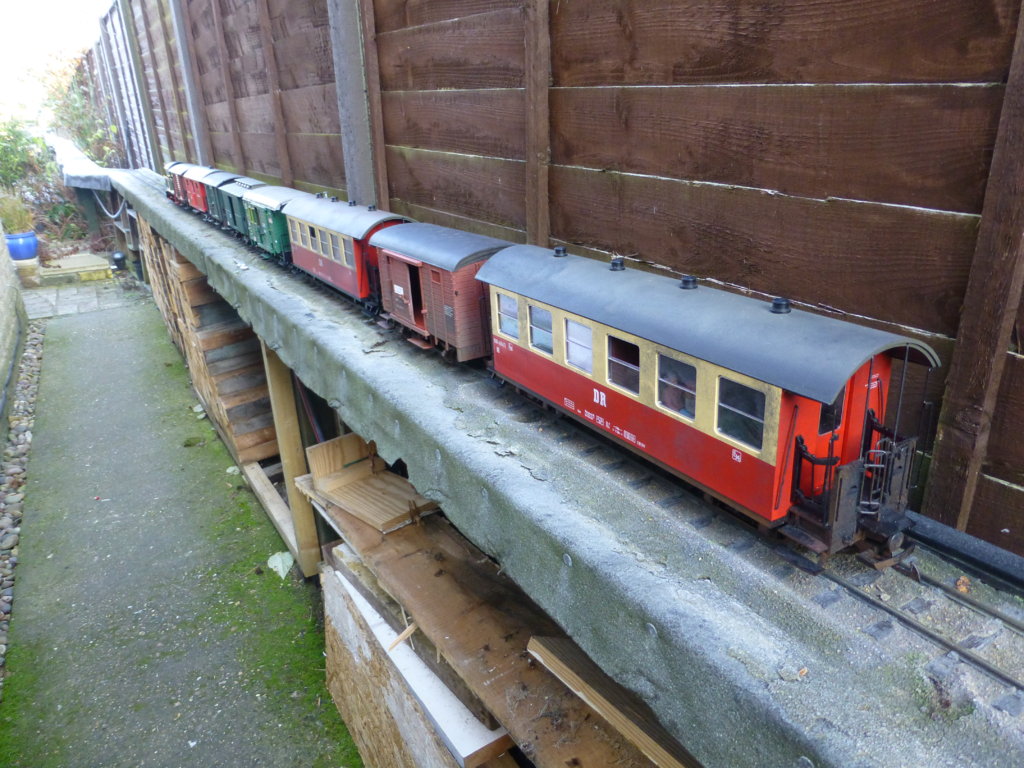 View of the Loco's face. Note the single Pipe for whatever Air? Strangely there are two of these Pipes on the rear. A quick check with Google confirmed that this is as per the Prototype. Curious. What a handsome Diesel and Model this is though. Very well presented as one would expect being built in Doncaster. I rather like the Green Livery that Mike has chosen. The prototyp has seen many Colours as you can see if you Google it. 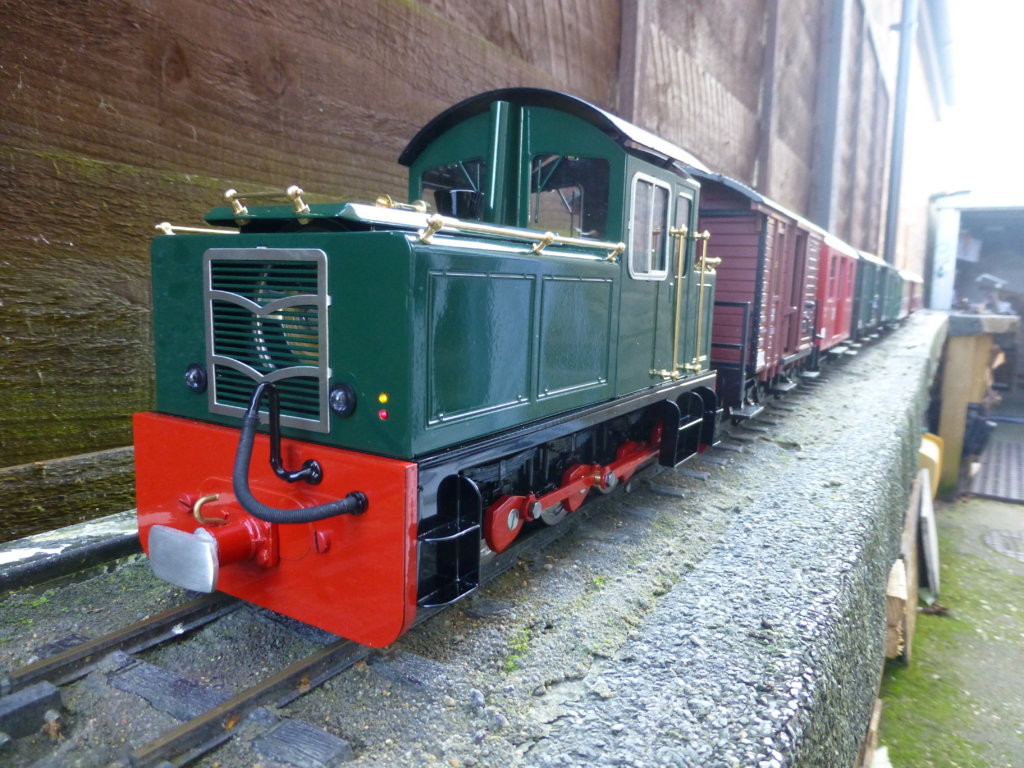 Here is see the jury rig coupling bidge and the 2 pipes on the rear. In truth the bodge was not too difficult as a lot of my stock has holes in the Couplings, a hang back from the days when I used these for Tail Lamps and Map Pins to define Wagon Destinations on my old line at Hemel. 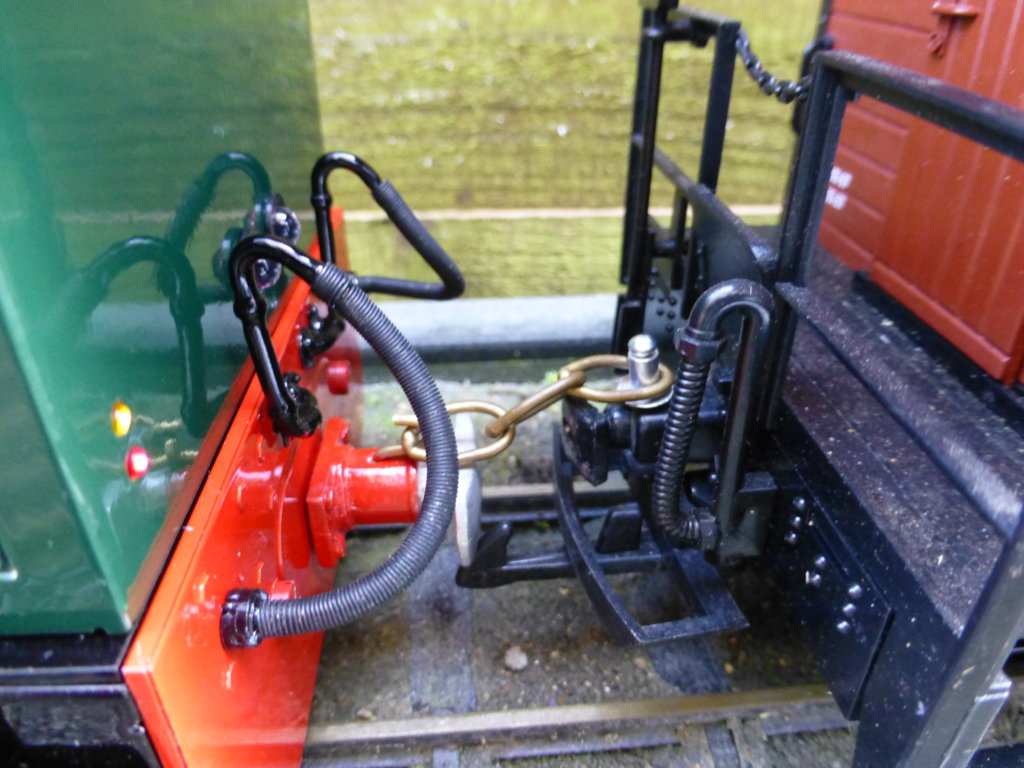 Side view of the 10 axles beig slipped along barely due to the Frost on the rails. Still makes a pretty picture. 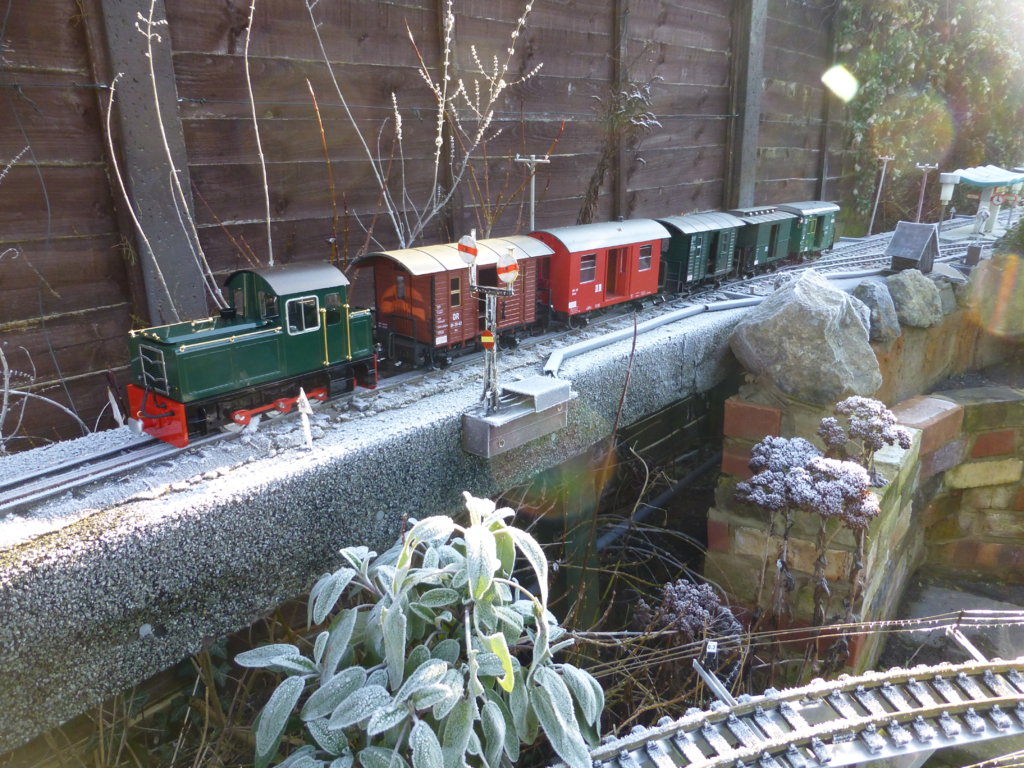 Now in the Sun at Magdesprung and able to pull this load quite hapily. 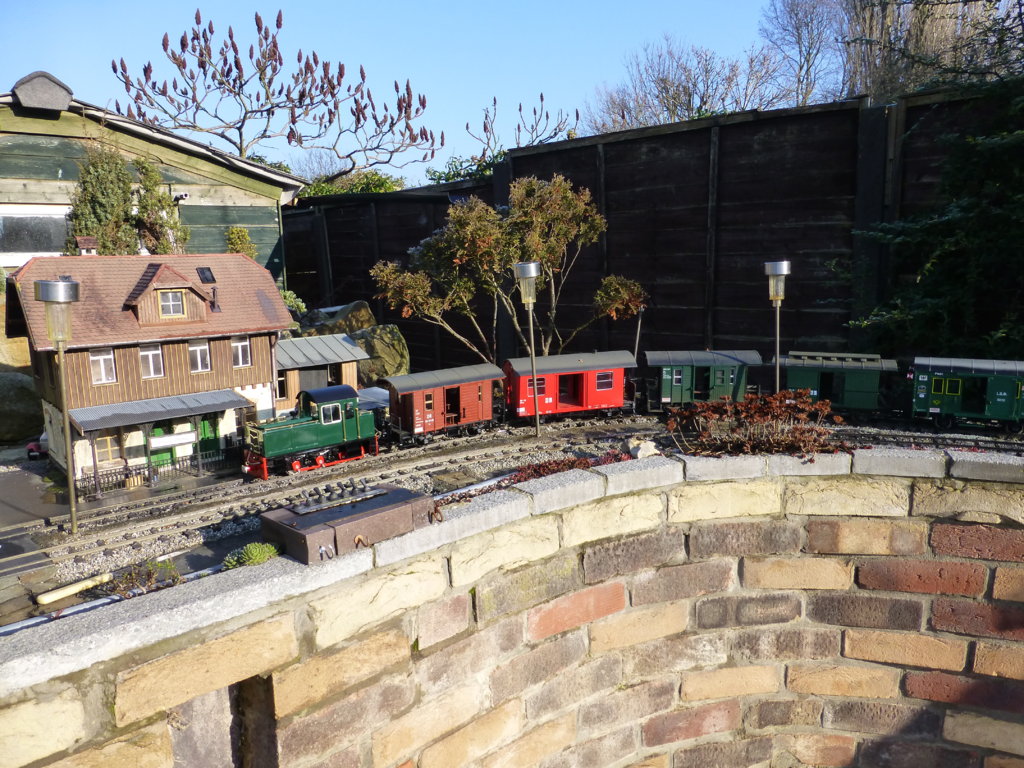 Another Face view of the beast. You should ba able to see that the Jackshaft is a working one, unlike the LGB Wangerode Models. A good strong set of gears are used to drive the Loco, forgot to note which of the 4 Axles are Driven. Think it was the Middle one. The Gears are not covered, good for Lubrication but bad for possibly picking up detritis. 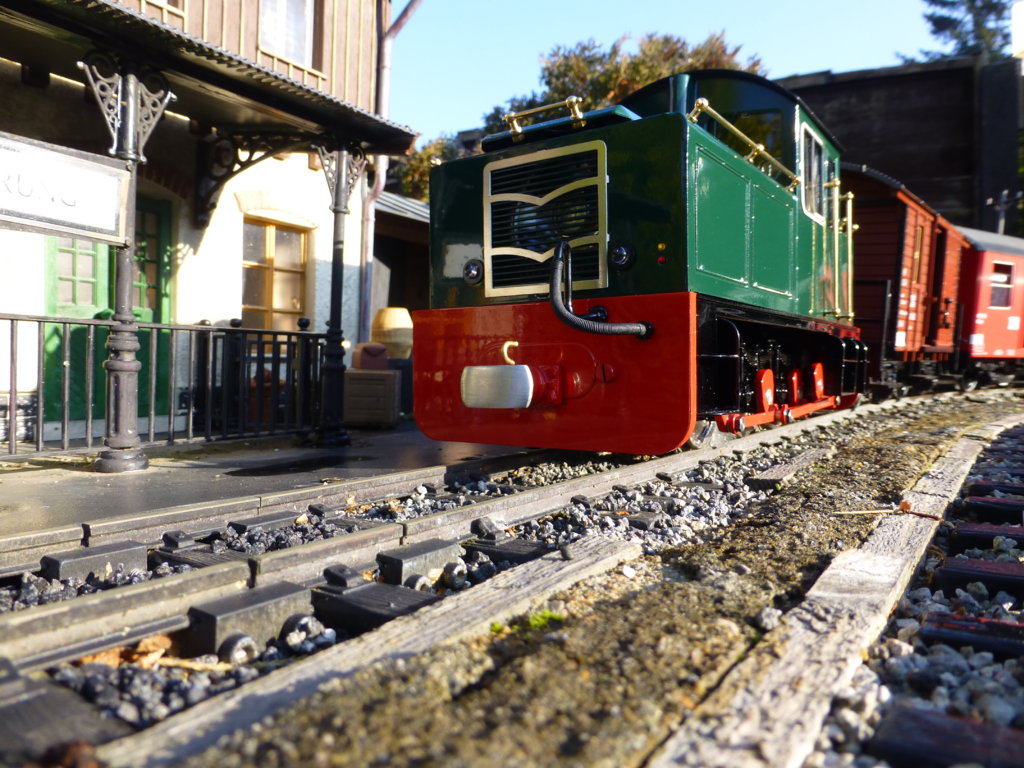 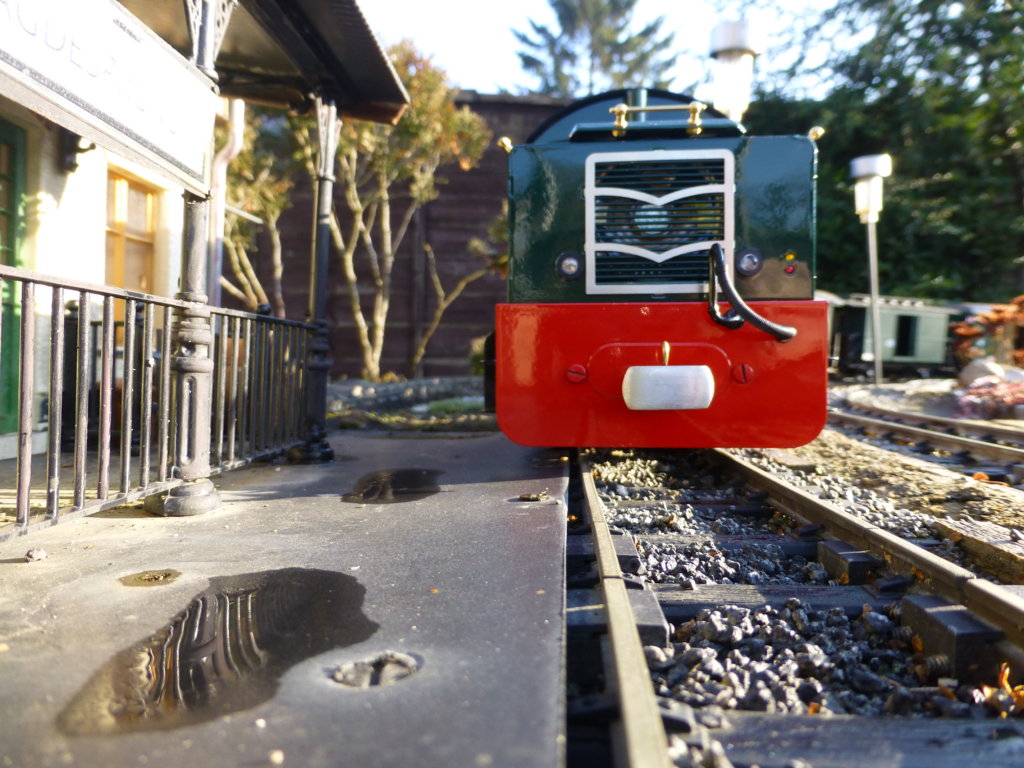 Showing the rear end on leaving Magdesprung. Not quite so pretty at this end me thinks. The 16mm Couplers fitted show clearly in this and the previous 2 views. Brandbright used to do a replacement for these which simply Bolted in Place in the existing holes of any 16mm loco and were LGB Compatible. It is to be hoped that the present patrons of this fine firm once they get fully into gear will reintroduce those Couplings to their inventory. 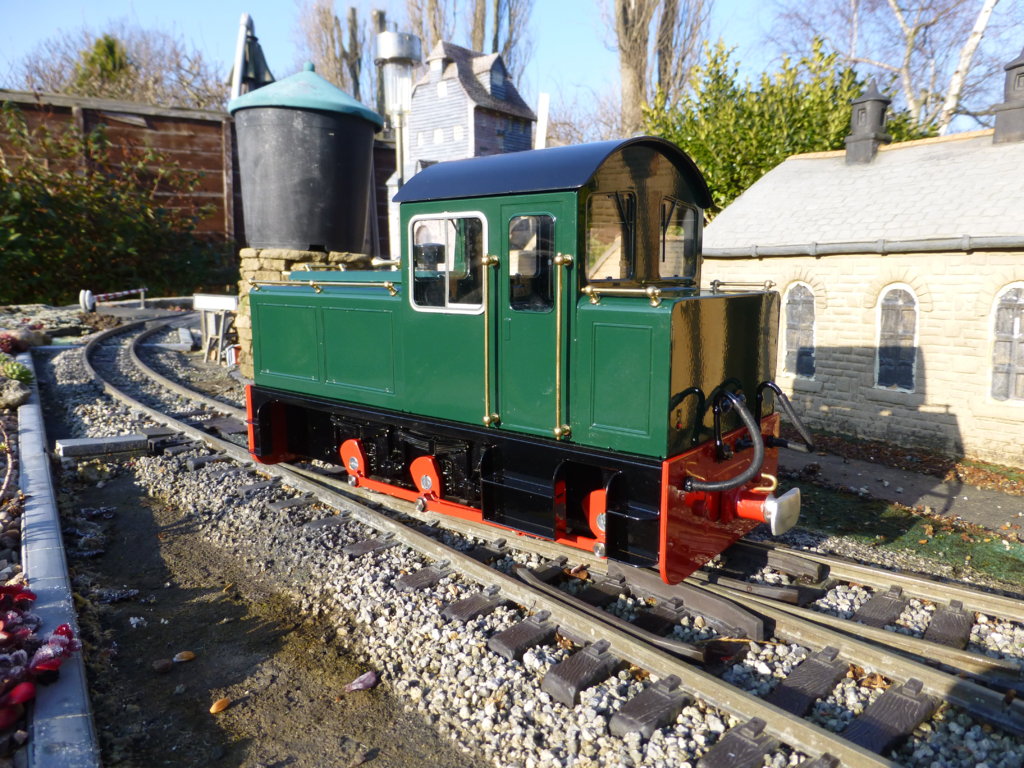 Approaching the Shed at Alexisbad. 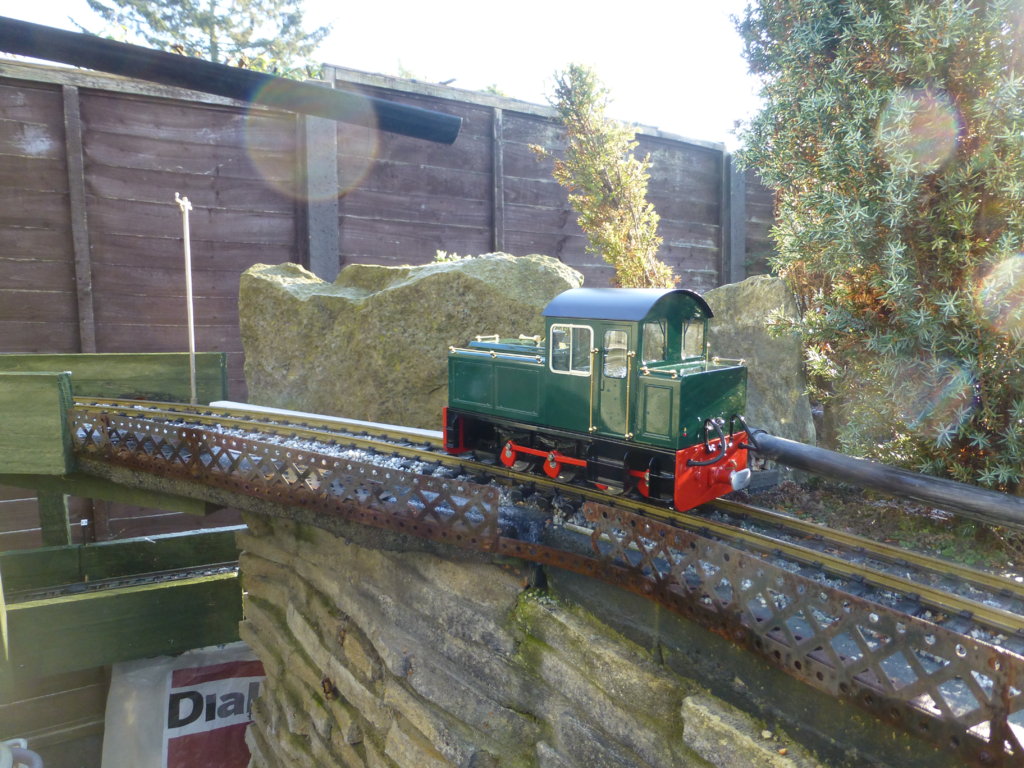 Standing at Alexisbad Station before returning up the Garden to the House to dry off the Frost before repacking and delivery to Mike. 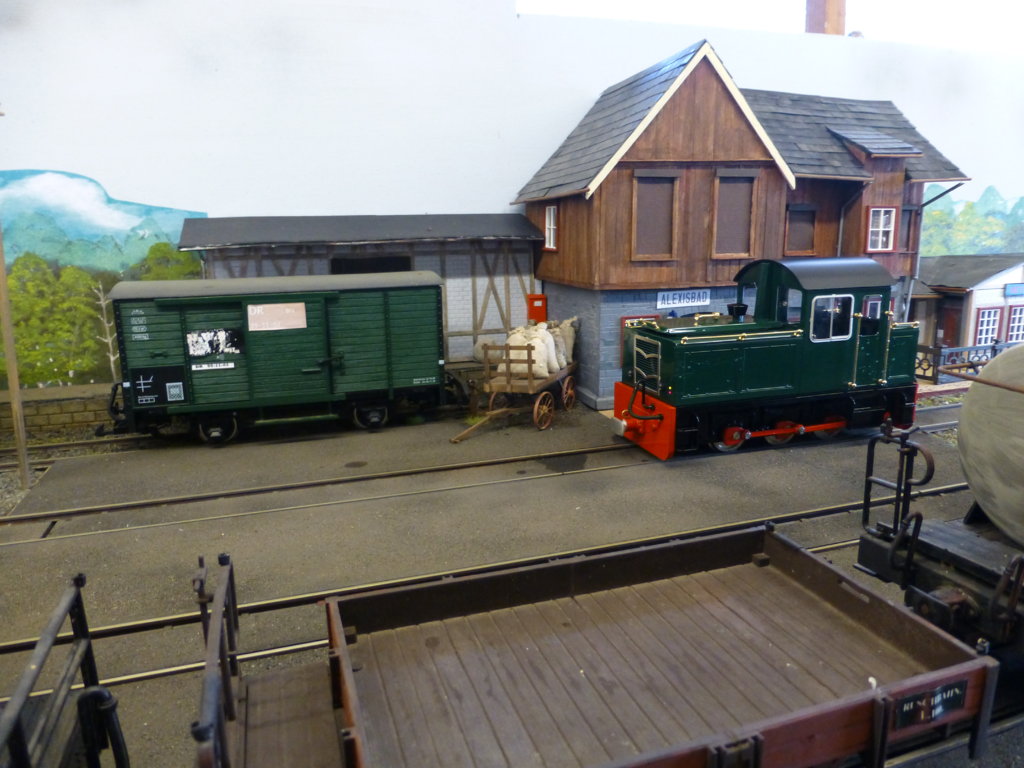 I was very impressed with this Loco, it looks good and has a good prototype fidelity about it. I am not however too sure about its pulling ability, Mike will find this out when he gets his new line built. I really hate the RC which I think is only fit for a Racing Car, but many do like these so who am I to complain? There is not a great deal of movement of the wheel so fine speed control though good is not made the best of with the RC provided.

All in all a pretty good machine that sadly does not appear to be in the Roundhouse Catalogue at the moment. Though a very similar 6 Wheel FR Diesel does appear to be.
JonD
Last edited: 1 Feb 2017
Expand signature
JonD Dunnyrail East German Harz NG circa 1981 in Cambs. Link to my Railway Build A new Railway is Started - G Scale Central Dated vid of trip on my line mihi necesse est optimus
Reactions: Mallarddriver, Hal Farsed, Gedney and 3 others

Good review Jon. Cricceth was indeed phased out by Roundhouse at the end of 2016. They have great haulage capacity all of mine can pull at least 20 Accucraft wagons.
Expand signature
Casey Jones Snr

Thanks for that Paul, shame it has been phased out. Harlech Castle is very similar but does not have the exhause coupled to the Cab which I think makes Criccieth look more workmanlike. No doubt there are other differences. Though I guess FR Diesel devotees and others yourself included will be saying vive la différence.
JonD
Expand signature
JonD Dunnyrail East German Harz NG circa 1981 in Cambs. Link to my Railway Build A new Railway is Started - G Scale Central Dated vid of trip on my line mihi necesse est optimus
Reactions: casey jones snr

A couple of things I found out when Mike ooened his Criccieth last week that I had forgor ppt to mention in the review.
1 there are lights that show up better indoors than my original pics. 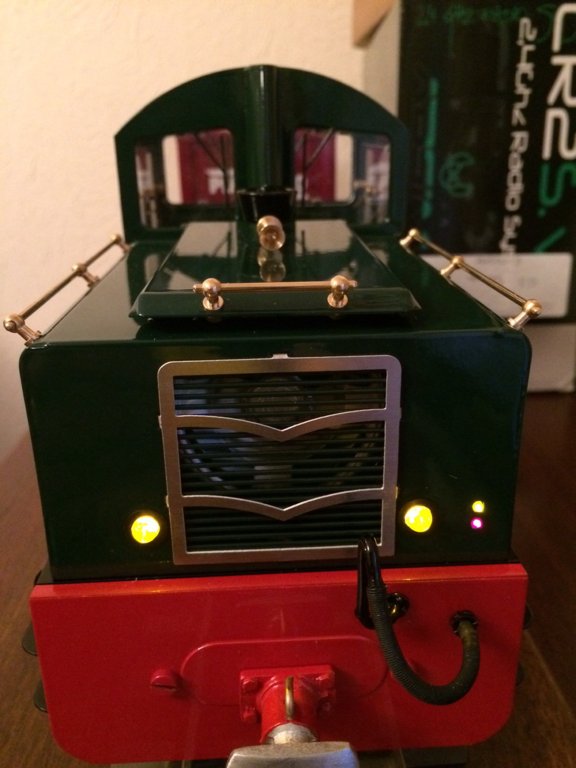 2 it is a simple fix to put on LGB Couplings, Roundhouse have thought this out cery well and a simple Allum Key Screw allows the Chain ones to be removed and replaced by an LGB Loop Coupling. Well done Roundhouse.
JonD 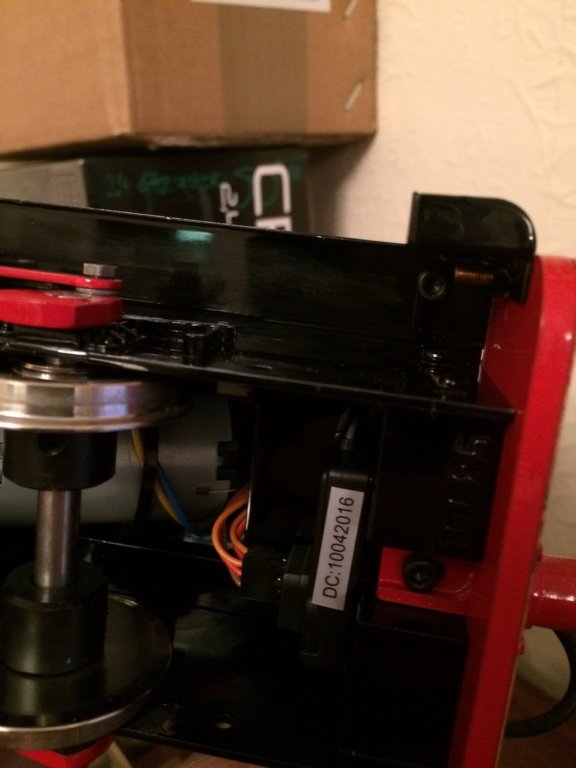 A few notes on the full-size Criccieth and Harlech Castles...

Criccieth's bonnets are wider than Harlech's, with the latter having a usable walkway around them. This is simply due to the extra equipment (vacuum exhausters, etc.) that Criccieth needs to work passenger trains and the larger diesel engine installed. Harlech has no train braking capability.

The two vacuum pipes on the rear end are a left-over from the days of the Festiniog's push-pull train. The landward (right) side pipe is the train pipe and the seaward (left) side pipe is the "high vacuum" pipe used to recharge the vacuum system after a brake application was made from the driving trailer. I used to know a lot more about how this worked but it was all a long, long time ago.

The cowling on the front of the cab used to contain the engine exhaust pipe. Due to heat issues the exhaust pipe was then moved to the front of the bonnet with a "keep the rain out" cap held open by the engine exhaust, and the bonnet lid was raised a couple of inches, but the empty cowling remained. The cowling was then removed during a recent overhaul and the loco now has a flat front to the cab... 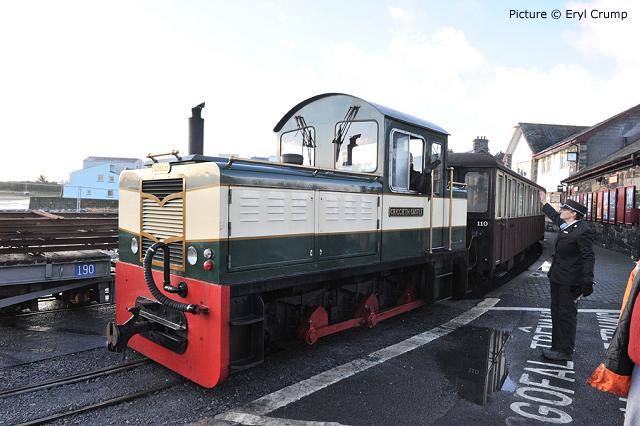 A collage of pics may be of interest.
Cric in the '90s with exhaust cowl, in 2008 without, and Harlech from the FR webcam 2016.
Harlech's makers plate is rather fuzzy, but... many people insert an extra "E" and make it "Drewery".
Even Roundhouse and Accucraft did this!

Too much 'Moose perhaps?

Now there's a thought.. oh, the dark side.

Keeping watch on the webcam, this afternoon I've caught both diesels passing through Minffordd.
This is a comparative view from above:-

MRail said:
Now there's a thought.. oh, the dark side.

Keeping watch on the webcam, this afternoon I've caught both diesels passing through Minffordd.
This is a comparative view from above:-
View attachment 219473
Click to expand...

Both locos will look very similar now ( apart from livery) as Harlech Castle has had its bonnet widened full width to accommodate equipment for train braking.

Hardly, they're a snapshot in time, much like some of your other locos