This week I attacked one of my KISS Container Wagons.

The LB 7801 with the blue Shciene-Strasse skip was one of the first cars I “had” to have when I started modeling the RhB. Took me nearly a year to locate one, and then had to go to Germany to collect it… but I was so thrilled to get it! 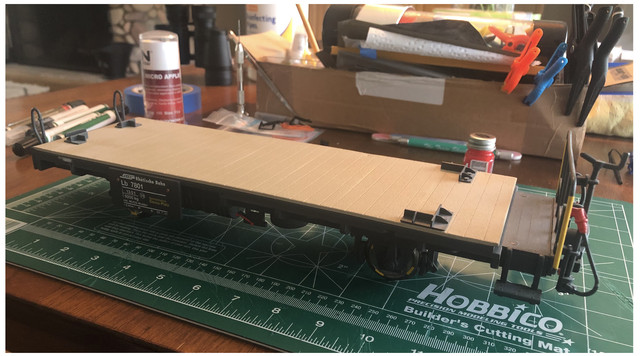 In the years since, as I’ve continued to study the RhB, and refine my modeling tastes, I came to realize the car was fairly off-prototype. Much like LGB, it seems that KISS recycled common chassis between their models, and this car was no exception. Studying photos on Haribu.ch and others, I found the platform railings, cables, air hoses (front and back), retainer valves, under-chassis plumbing, and the end frame's profile were all deficient.

Honestly, to “upgrade” the car to an accurate model would likely be best by starting over. Given how lazy I am, I figured I would see what I could do with the car as is.

To begin with, I made three concessions in my mind:

With the above in mind I started to work, beginning with tearing the car apart! I first stripped all detail parts I could. This included removing all hoses and cables, as well as the entire single-piece molded “wood” deck.

After some debate, I rummaged around in my spares box and decided to throwaway the cables and hoses from KISS. I replaced them with LGB spares.

On the B end, I fit a pair of LGB hoses from an RhB 4 wheel container wagon. 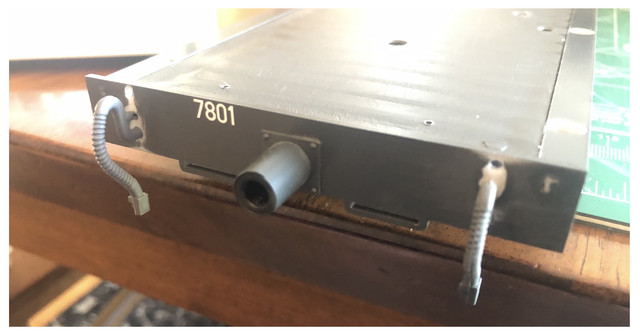 Scrap styrene diamond plate tread was cut to fit over the molded KISS platform. (This is not necessarily prototypical to THIS car number - 7801 - but I have seen it applied to other similar cars in the series. As I felt it would improve the overall look of the wagon I accepted the idea that though I never had a photo of this, it was possible it had occurred at some point!) 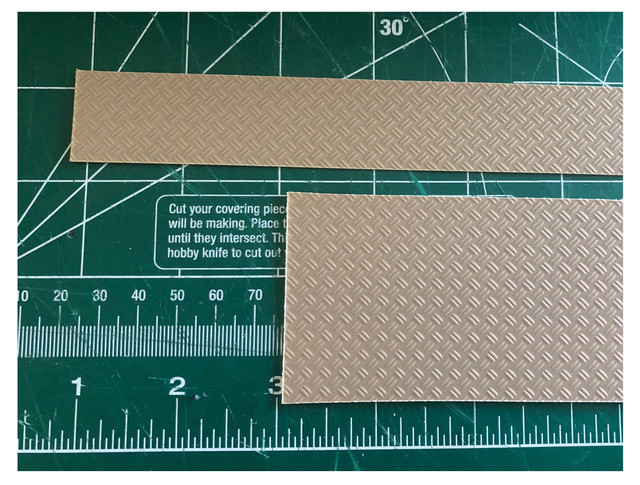 I also pulled a set of LGB hoses from the B end of an LGB 4 wheel RhB goods van, and fit these to the platform as well. The remaining cables and lines that had been on the KISS model were not replicated as they did not exist on the prototype photos I had of the car. 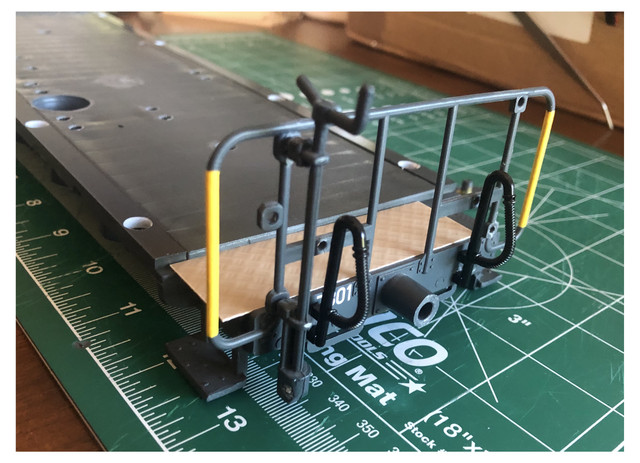 A quick look at the random parts for the build. This really did turn into a Frankenstein of donor parts! 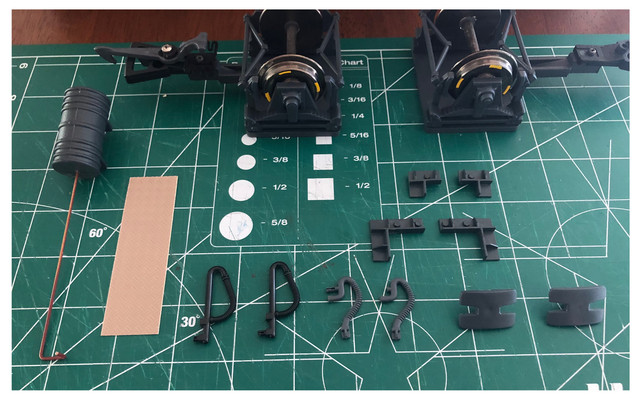 With all the parts accounted for, it was time to paint.

First up, the frame when outside for a coating of The Army Painter Uniform Grey spray primer. During this time, I blue taped around the pair of “air selectors” on the underside, so they would retain the car’s original, darker grey colour.

The air lines and diamond plate also went out for a coat of the same. While that was drying, I added some thin styrene to the platform end railing, just to cover the “holes” that were used to mount the old cable castings. In reality, these two cross beams shouldn’t be on the railing at all, but in trying to cut them off, I found the KISS plastic was brittle enough I was fearful the whole railing would crack if I tried to remove them. As such, I chose to close up the obvious holes and let them “blend” into the railing. 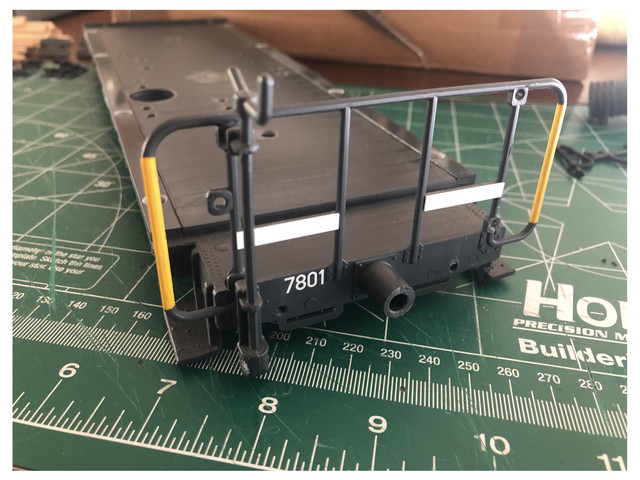 Back inside, the air hoses were re-taped/masked so they could be hit with The Army Painter Black Matte. 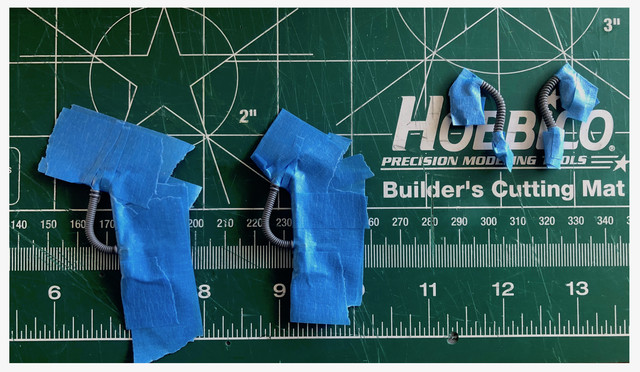 With everything allowed to dry, it was time to start assembly. First up, the original air tank, now painted black, was re-glued into position. 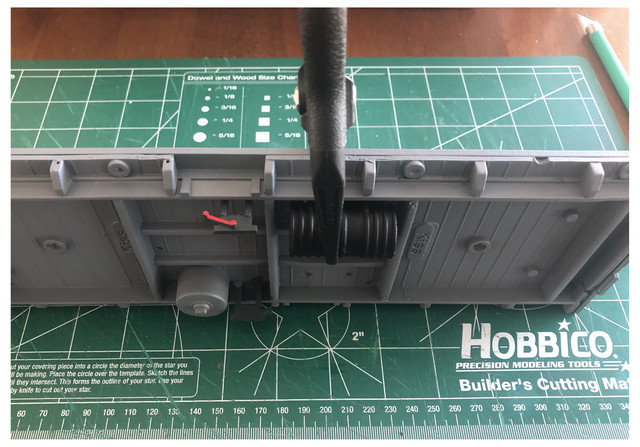 And then the new air line piping was installed. (Note: this is in no way accurate - I just wanted to “busy up” the underside of the car a little bit, so it breaks up in profile. The lack of under car appliances from KISS was noticeable to my eye.) Air lines, hoses, and the diamond plate were all glued into position as well, each with a healthy applications of Zap-a-Gap CA glue (green/medium) and then I sat down for the mind numbing task of cutting new, individual basswood plans for the car’s deck.

Each plank was marked and cut… 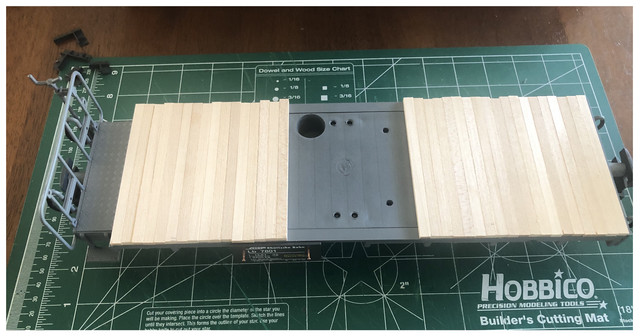 Until I had enough boards, plus a few spare. Not all were the exact same size, so I bundled planks together, and then using a nail file, sanded down the undulating ends to a more uniform length. 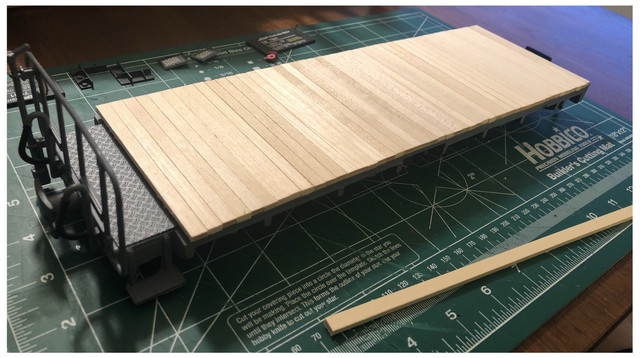 Now it was time to “stain” the boards.

Again, I used my own concoction made of:

All of that was mixed into a single pot and shaken, then liberally brushed (slopped) onto the individual boards and left to dry. Once dried, all boards were sprayed (both sides) with The Army Painter Anti Shine Matte Varnish, and then glued to the KISS frame. 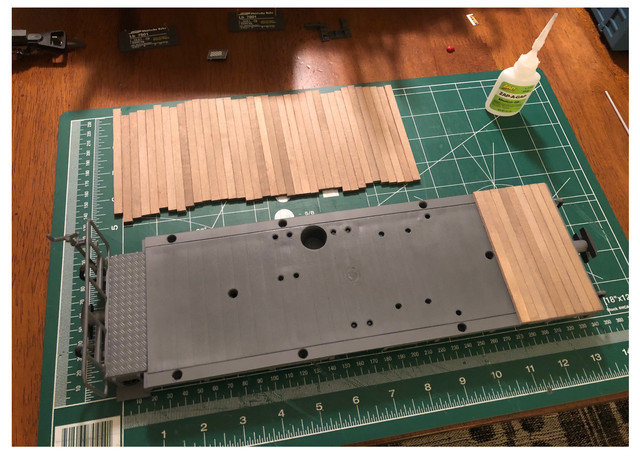 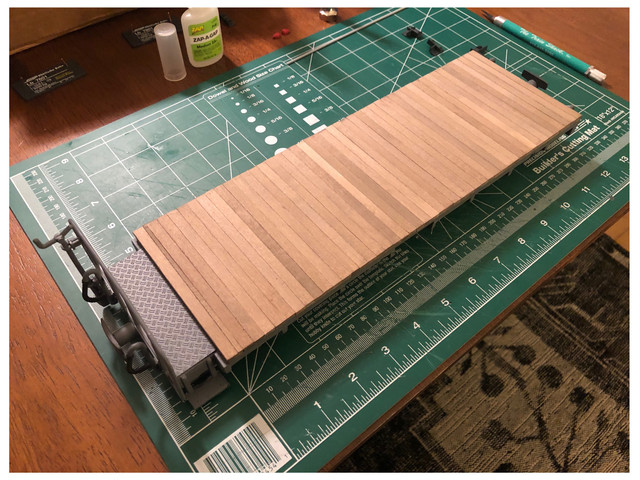 Next, the original brass castings from the KISS car were reattached, using a pin vice to drill mounting holes on the top of the deck. I was also careful to reposition the “wheel chocks” per the prototype. Kiss placed the castings in-line with the edge of the car’s side, but in realty, this hardware overhangs the car edge. During assembly, I realized I wanted replace the KISS air valves. The original ones were nothing more than two red “blobs” - almost spheres, painted red at either end of a brass rod. I had a dig in the spares box and came up with a set from LGB, so set to work crafting a new piece.

Knightwing 00 Pipe Set 1 was used to simulate the air lines, which were fitted to some scrap styrene square stock and built up to provide a mounting channel for the underside of the car. Out for a quick spray of black, and the piece was glued together for final assembly. Finally, the LGB spare set of car order hasps (don’t ask me the german name for these things!) were attached to the car, replacing the less detailed KISS parts. And here you have it. Not fully complete, still a little frame work to fabricate and install, but overall, a car I’m far more happy with to be running with my maintenance / infrastructure trains. Overall, I would say the few hours spent on the upgrades were a marked improvement from the OEM KISS unit.

Thanks for reading!
- Josh
Reactions: 1 user

A brave man!
Or, just a little crazy, from 'Lockdown'?

I think I'll give him the benefit of the doubt.

PhilP said:
A brave man!
Or, just a little crazy, from 'Lockdown'?

I think I'll give him the benefit of the doubt.

No he wants to make something great even better, no matter how expensive or exquisite some thing is it can always take a little bit of furteling.
Toggle signature
JonD Dunnyrail East German Harz NG circa 1981 in Cambs. Link to my Railway Build A new Railway is Started - G Scale Central Dated vid of trip on my line mihi necesse est optimus

Apart from this bit of madness, a superb upgrade.