I’ve slowly been acquiring a set of harz coaches, and just wondered is there any sort of rules regarding formations or uses I need to know?

so far I’ve only got the 3 items in the photo,

It’s the single ended van that’s the most intriguing, what’s its intended use? 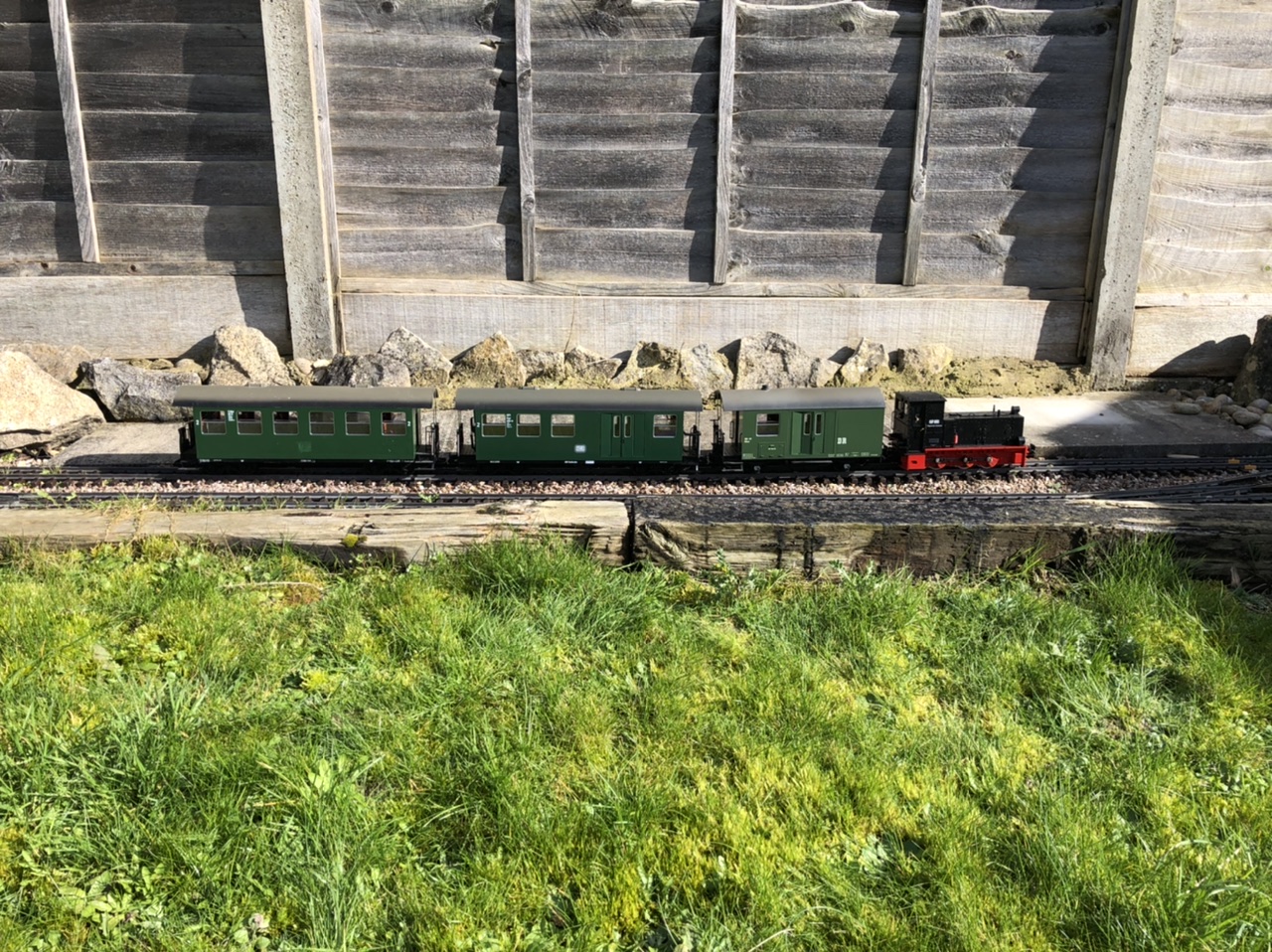 Expand signature
The home of the laverstock Garden Bahn

From photos I have seen, the baggage car is usually at the tail end of the consist. Opposite of American train practice. I wonder why ?
Expand signature
DAN PADOVA

Madman said:
From photos I have seen, the baggage car is usually at the tail end of the consist. Opposite of American train practice. I wonder why ?
Click to expand...

From pictures of the Harz I've just Goggled, their seems to be a baggage van at one end of the consist, so it'll be either at the tail of the train, or behind the loco.

Both bogie and 2 axle types may be found in use. Mostly I see red and cream livery, although sometimes there is a green train.

I would personally have that one at the opposite end of the rake to your short baggage car.... 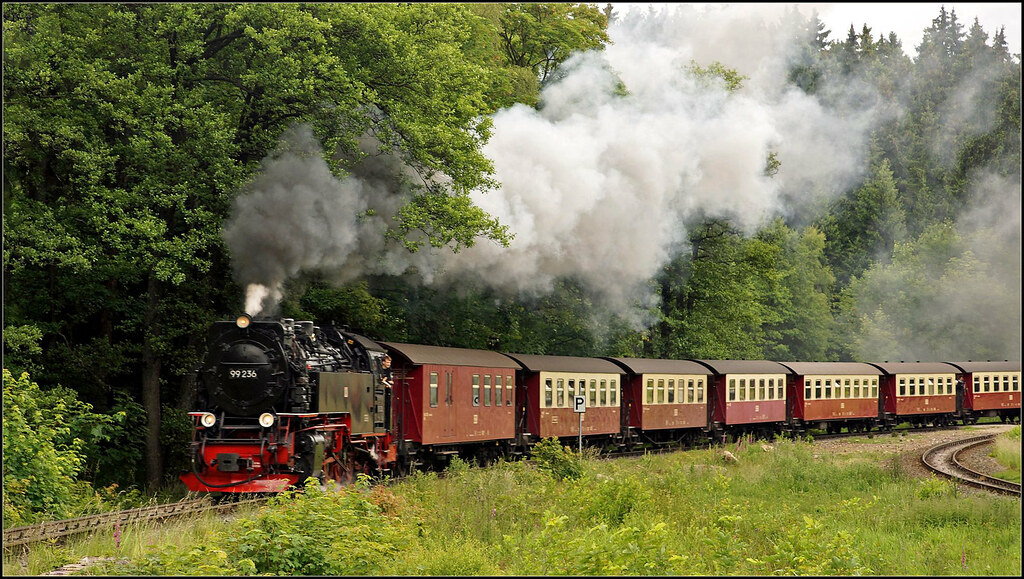 Here is a picture of the carriage taken during my recent visit to the HSB, taken at Wernigerode Station: 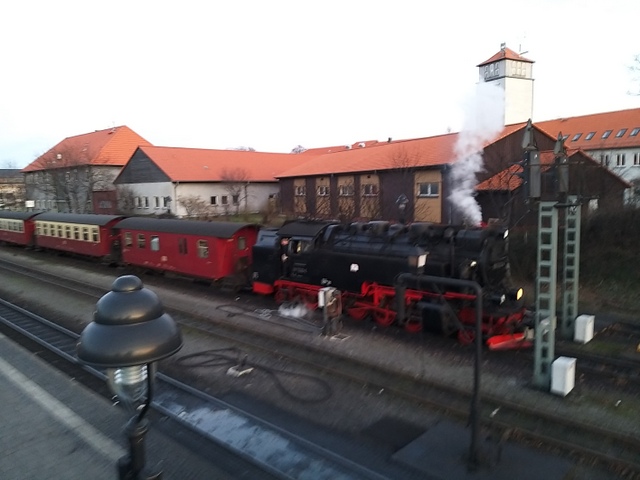 There are bogie vans and 4 wheel ones, the bogie ones also have a few seats and the guard tends to open them up when it gets crowded. The vans are used for bikes, big luggage etc. There doesn’t seem to be much difference in luggage capacity but the bogie ones are dominant on the Brocken - Wernigerode section I assume for the extra seats. As said above they stay in the same place in the rake so can be at either end and occasionally in the middle. 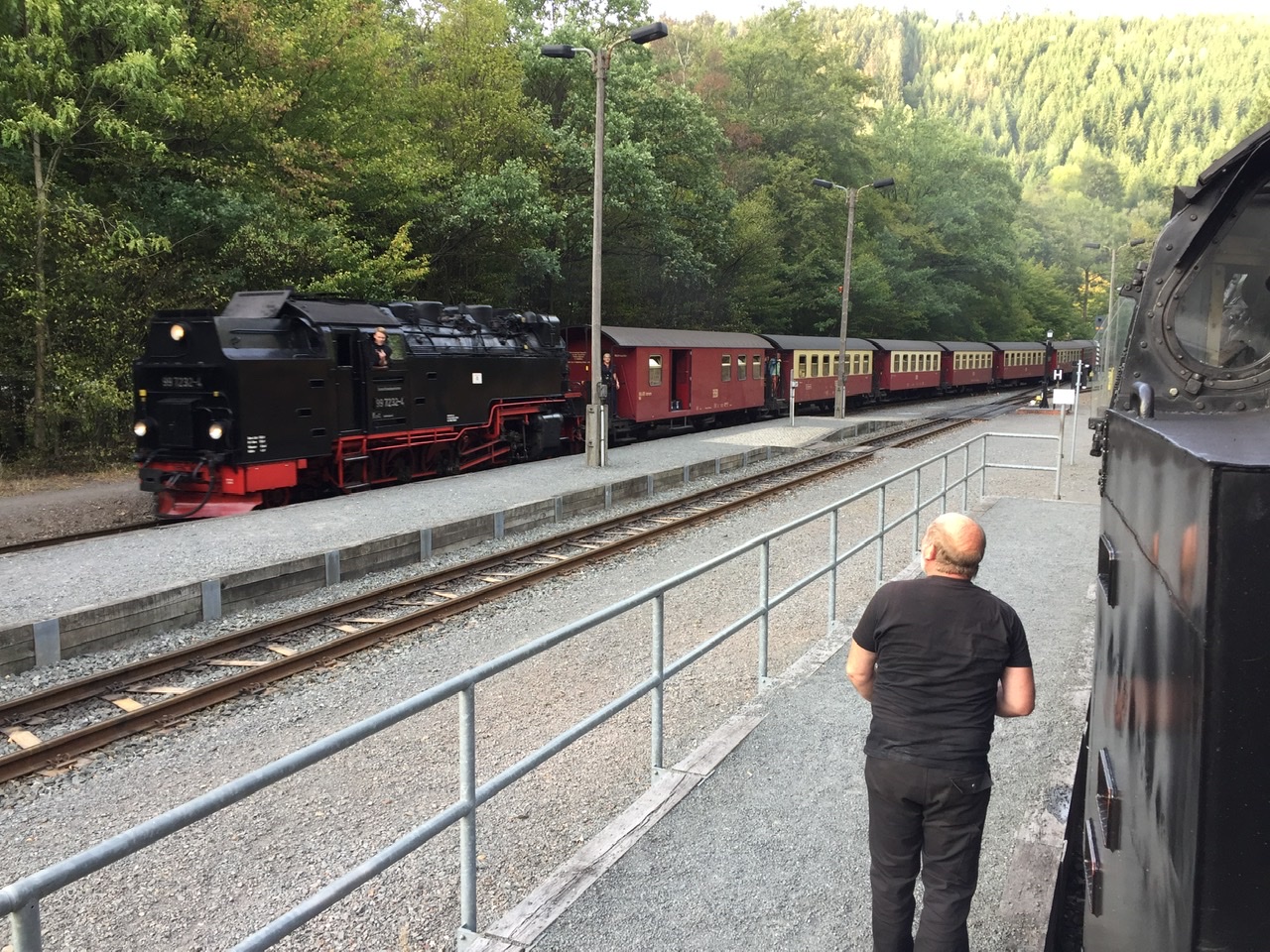 There are several types of the ‘modern’ curved roof coaches in two lengths, both longer than the LGB one

The green heritage coaches are a slightly different design and roof profile rather than a simple repaint like LGB. 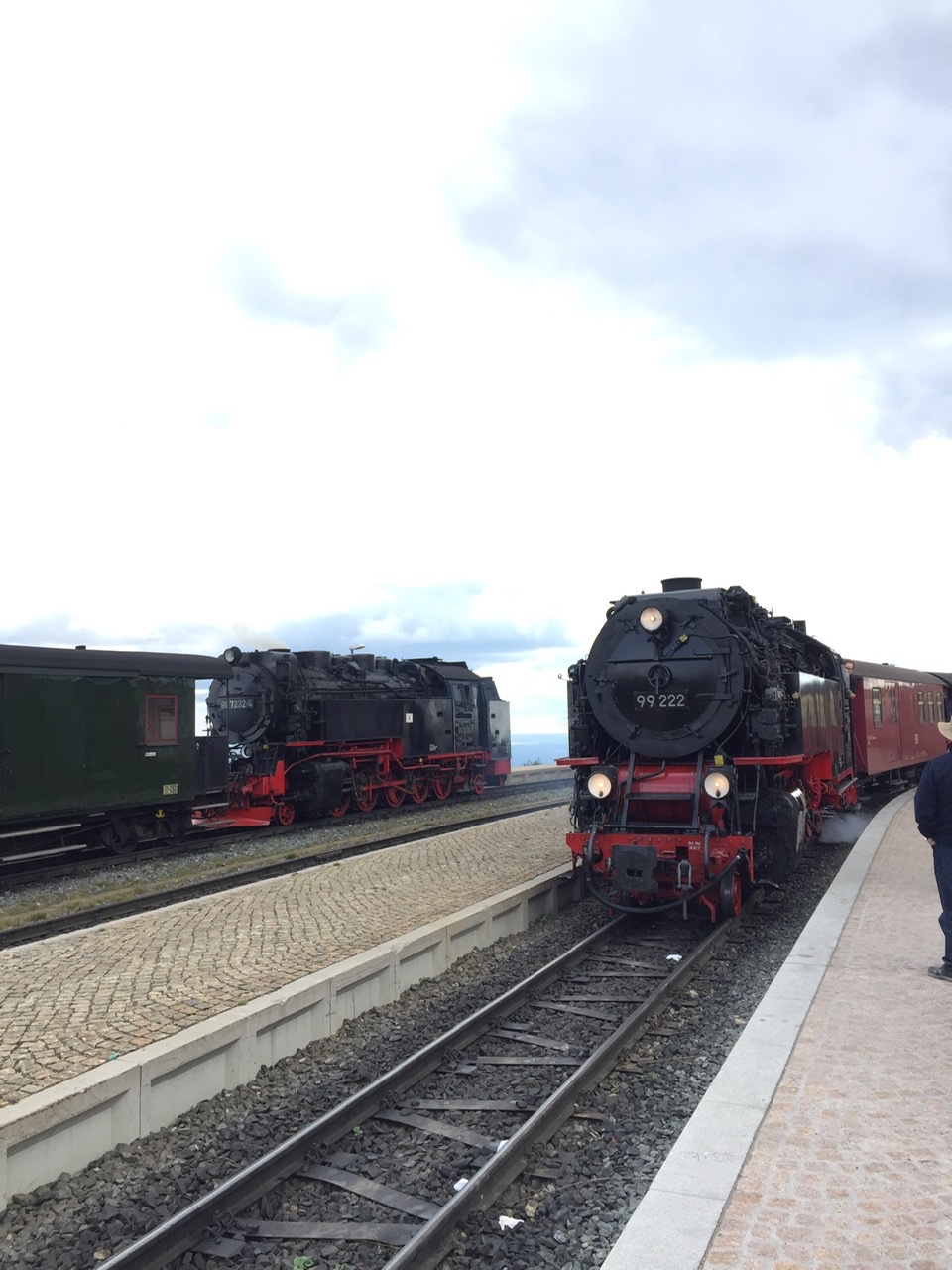 The Harz heritage stock alongside the modern coaches, note the roof curve tightens at the edges. A four wheel and short bogie van seen here too. 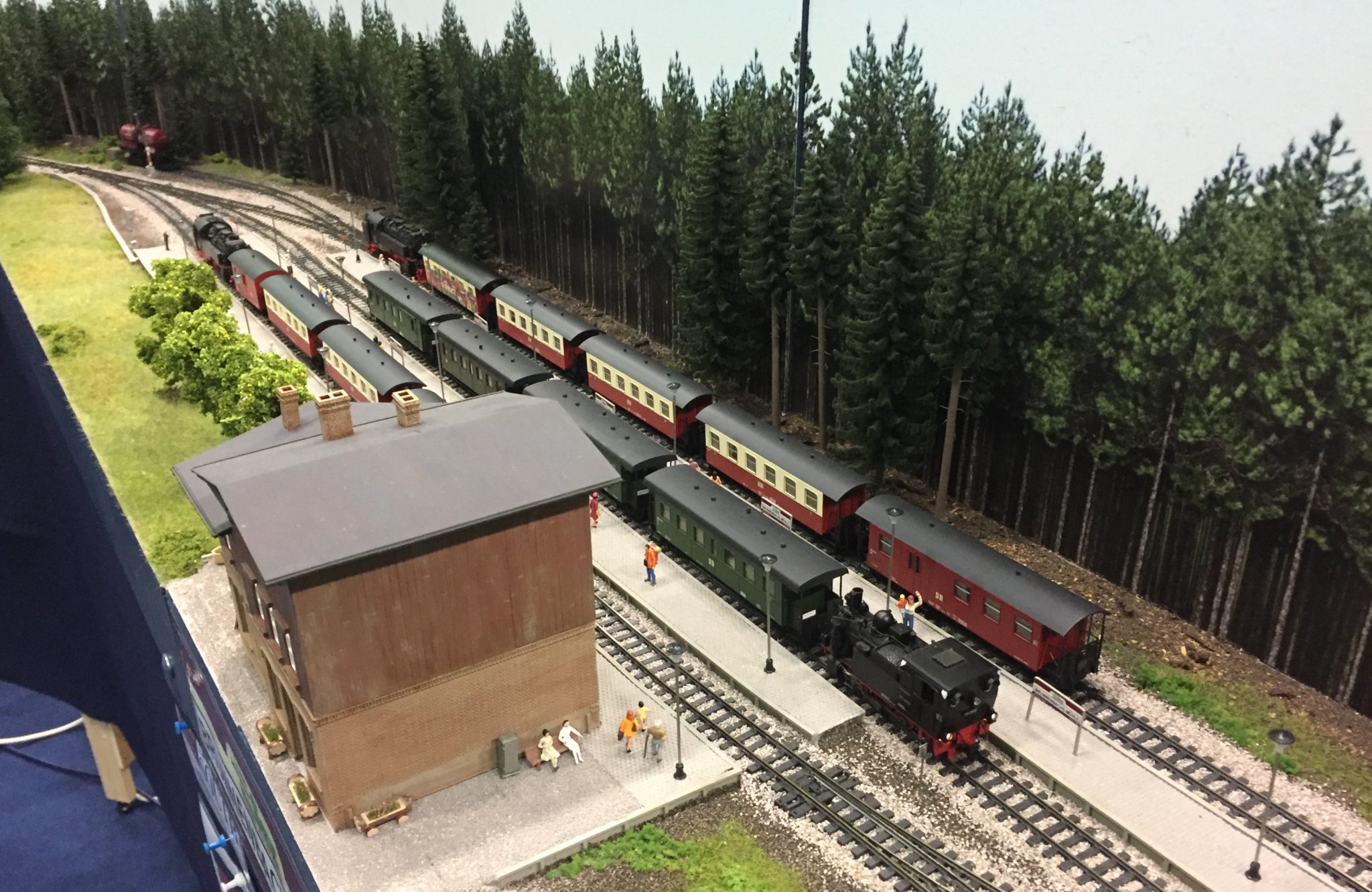 a98087 said:
I’ve slowly been acquiring a set of harz coaches, and just wondered is there any sort of rules regarding formations or uses I need to know?

so far I’ve only got the 3 items in the photo,

It’s the single ended van that’s the most intriguing, what’s its intended use?

The 4 wheel van is a replacement or updated version of the Van used for the Guard. It gives hime somewhere to use an on Train Office but also used for conveying small less than carload manhandled loads. This traffic has long ceased now. But the practice of having that van is still used.

My main interest is the Selktalbahn, like Paul I can post endless pictures but here is where a few words cover a thousand pictures. On the Selktalbahn there were no hard and fast rules of where that van would be, could be either end leaving Gernrode or as in my chosen period circa 1980’s in the middle or 2 to 4 coaches. Perversely there would often be 1 coach (sometimes with a 2-10-2) trains without a van at all.

I much believe that day to day operations would define where the van could be. So day one the van could be on the rear, during that day a coach or two may be added to the rear at Gernrode for strengthening purposes (lots travelling) then perhaps one or two of them detached for the next days service. Typically Railway men being Railway men they would detach the most convenient (or possibly crippled (needing repair) thus meaning that the van could be transposed around the consist of the Train. Though I also believe for the Guards convenience there would have been a chosen location. With this van having doors either end the centre of a train would work nicely.

These 2 grabs from slides taken in 1981 show the same consist as leaving Gernrode and later in the day returning. Note that the van has not been remarshalled on the Train and neither is it in the middle. The van is one of the earlier ones prior to the type that you have that were built or possibly converted in 1989. 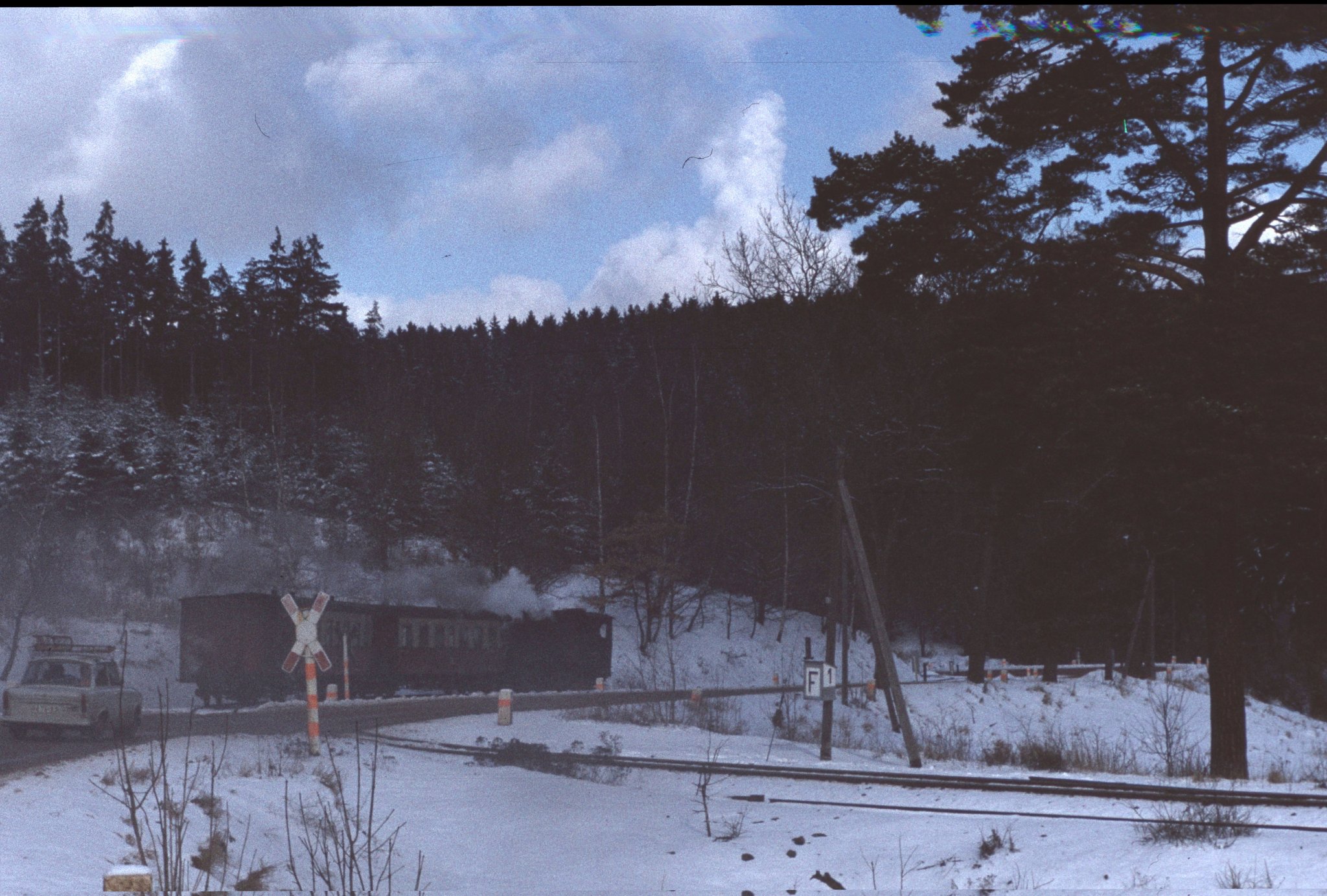 Thanks for all the responses, answers my questions and means I can prototypically run any combination of the coaches/vans I’ve got so far.

Dan
Expand signature
The home of the laverstock Garden Bahn