Hello again; the Big Hauler train set locomotives are not alone in getting altered to my tastes, the passenger cars from those sets are getting modifications too.

Some were done a few years ago but there is plenty left to do on all the cars.
In 2009 - 2011 Bachmann offered additional passenger cars as kits and some of those were acquired to add to the sets.

Anyway, on today's menu are the coach and observation from the Durango & Silverton set.

In the intervening decade since buying the set on of the 2 factory bulbs inside the observation has burned out.
And I want more than 2 light sources.
And I want LED instead of bulbs.

And ... the observation has the platform railing and lighted drumhead at the end of car which has heating stove and toilet compartment.
How odd.
That changes.

Last night I removed the previously repainted car floor, unsoldered the drumhead light leads, and swapped railings.
Then with a bit in a pin vise since a power tool would be a bit excessive drilled hole in end beam for light wires to pass under car floor.
They originally re-entered car body through one of the snap tab slots for that car body, that practice is being copied at the new end.

Drumhead light bulb will get replaced by LED when I decide the details of the LED installation.

Yesterday my idea for installing interior lights changed and was dramatically simplified.
Instead of soldering recovered solar yard light LED with Plastruct lamp shades to brass rods then mounting that assembly in the clerestory,
a string of battery powered Christmas lights was dug out of the "lights parts stash" and cut up to suit.
The one string will provide 5 lights each to 4 cars.

The manner of installation is 5 led being contact-cemented to a .040 by .250 styrene strip from Evergreen Styrene then that being secured inside clerestory
with excess wire length coiled and secured out of sight.

A 9 volt battery in molded box under car floor powers the train set cars.
Some level of resistor will be needed since the Christmas string made of what looks to be Surface Mount LED encased in drop of epoxy only uses 1.5 volts.

-> To be added later are train-end marker lanterns on the observation. Whether to buy or build has yet to be determined. 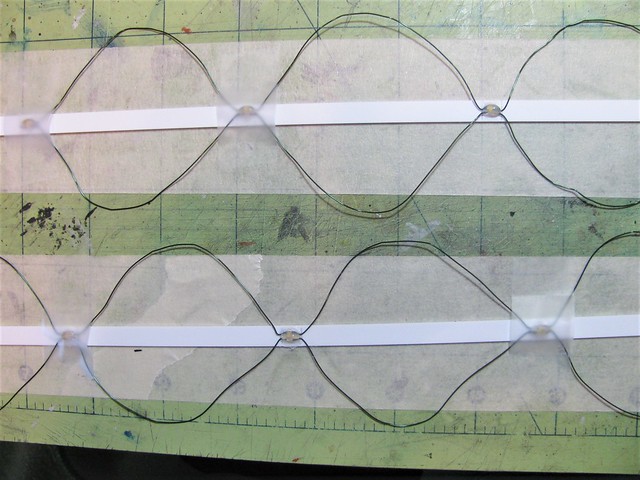 Another thing to decide: whether to use Bachmann's existing electrical conduction system to get power to the LED I'm putting in or to replace the whole Rube Goldberg/Heath Robinson thing with probably rather more reliable direct wiring.
With my health the mess it is, the simpler work is usually the better choice.
But direct wiring would be so much more reliable. Removed metal strips can be employed to make make wheel wipers on another project. 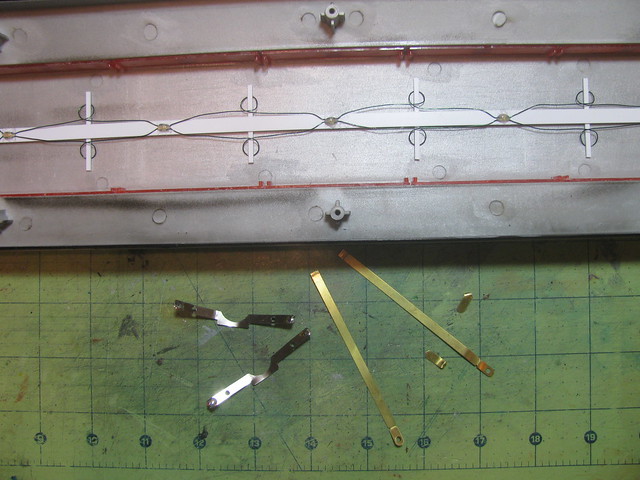 I removed the metal strips when I refurbished a couple of my Bachmann coaches, managed to run both wires down the central column where one of the strip resided.
Toggle signature
Tumble Down Falls - The new railway

JimmyB said:
managed to run both wires down the central column where one of the strip resided.
Click to expand...

Ah, that's an idea.
Being unsure if the wire I'm using would fit the initial plan was to let the wires come up through the toilet compartment and with enough slack to be able to lift off the not-screwed-back-on roof, then unplug it from a small plug added, set it aside, and have access for slowly placing people in the car as figures are gradually acquired.

I have a couple of Bachmann kit coaches I bought a long time ago and haven't done anything with. Perhaps it is time

. If I can find them

Chris Vernell said:
Perhaps it is time
Click to expand...

Maybe it will take just long enough to find them to have time for the plan to come together?

Southwestforests said:
Maybe it will take just long enough to find them to have time for the plan to come together?
Click to expand...

None of my plans ever survives first contact with a Dremel

Do Dremel make a vacuum cleaner?

Photos are a 15 second exposure & though looking quite bright in them the lights are too dim to be noticeable in daylight. 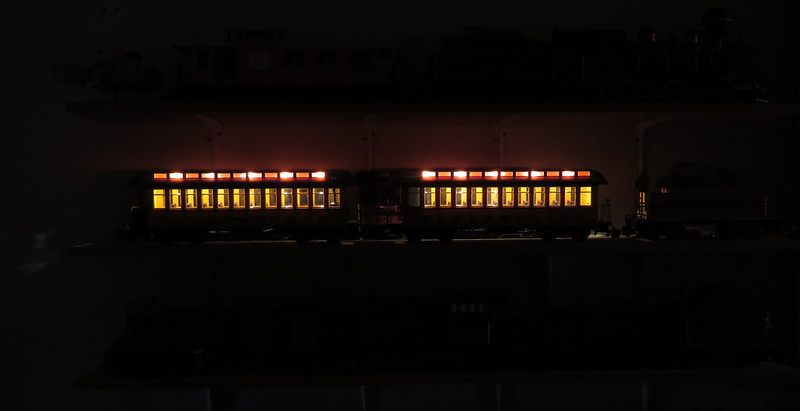 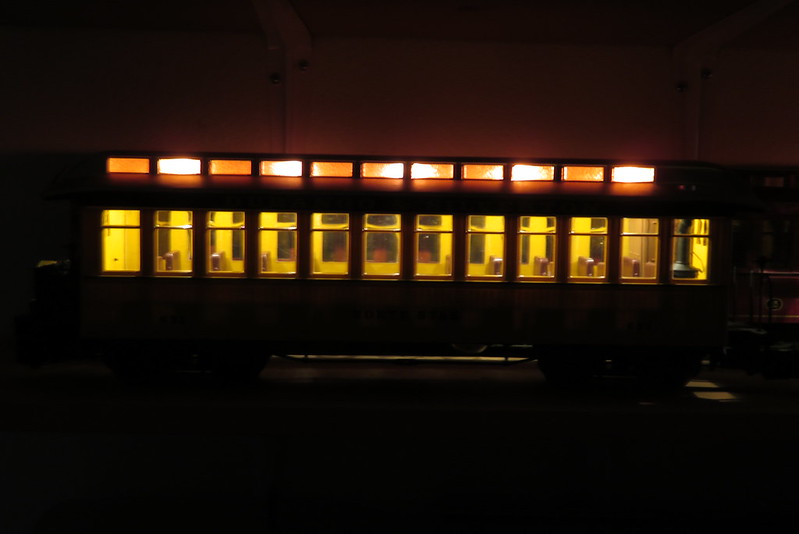 Looks like I need to go take out a second mortgage for cash to go buy G scale passengers for these, the Pennsy cars, and the V&T cars.
Oh, wait, I rent an apartment.

Now, if Bachmann's factory folks hadn't glued the windows in with a quarter-mile long bead of glue each, I'd remove the transparencies and paint the car interiors.

Yes, I have already tried, several years back, only accomplished cracking bits off lower edges of transparency parts.

Decided it wise and advisable to abandon hope before one cracked right up the middle of a window.

In contrast to the Durango & Silverton coaches with their long beads of something very strong securing the window transparencies the Pennsylvania coaches have 6 drops of some adhesive on which Bachmann totally wasted their time and money.
But that makes life a lot easier for people like me who want to paint the inside of the car body. 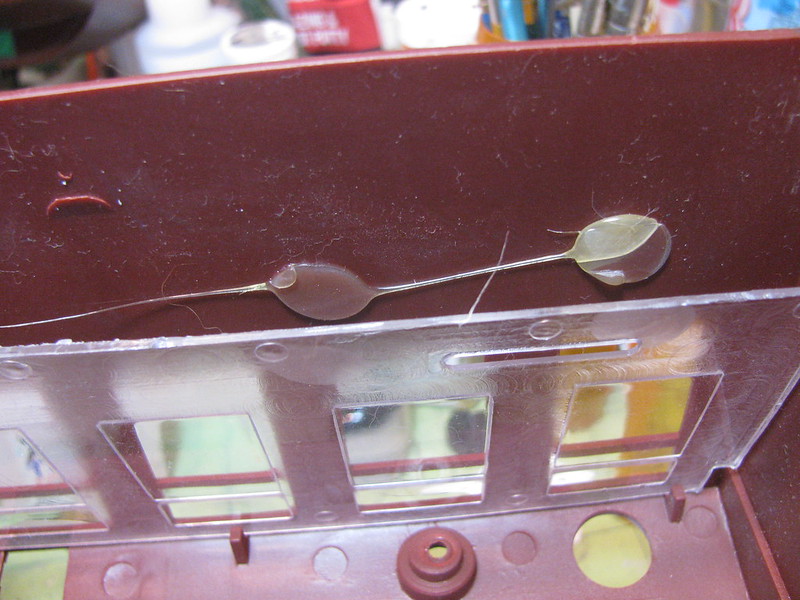 Progress today! took advantage of Bachmann's bad window glue and the good weather outside my windows to go outside and get the PRR cars' window inserts painted.
Masked what needed to remain clear and sprayed the inside surface of the inserts with a wood-ish color.
Somewhat lighter than I've read was usually used back in the day, but, hey, the cars are non-prototypical from the word go anyway.
Painting inside surface of inserts leaves outer surface of them and inside of car side free from paint which might interfere with the glue I'm going to use when it comes time to make the cars operational. Eeeww, look how much dust got in through the open clerestory windows in several years of shelf-sitting. 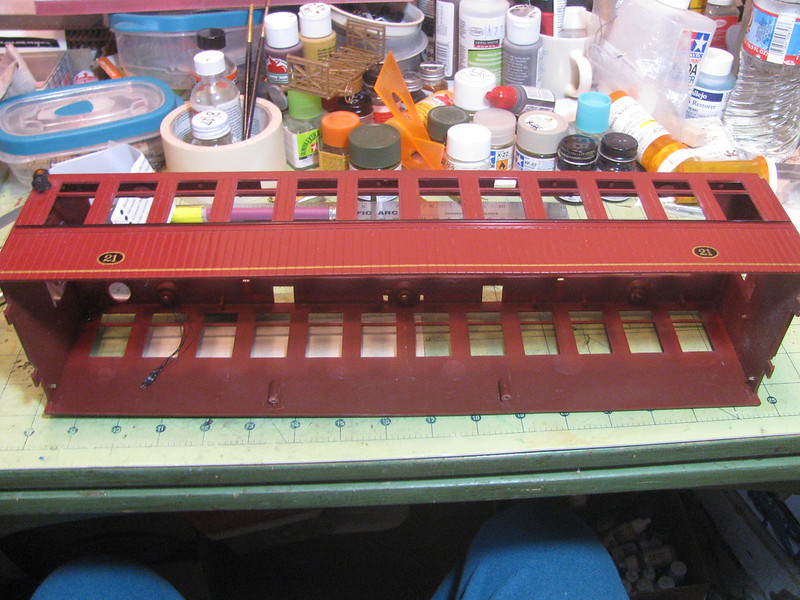 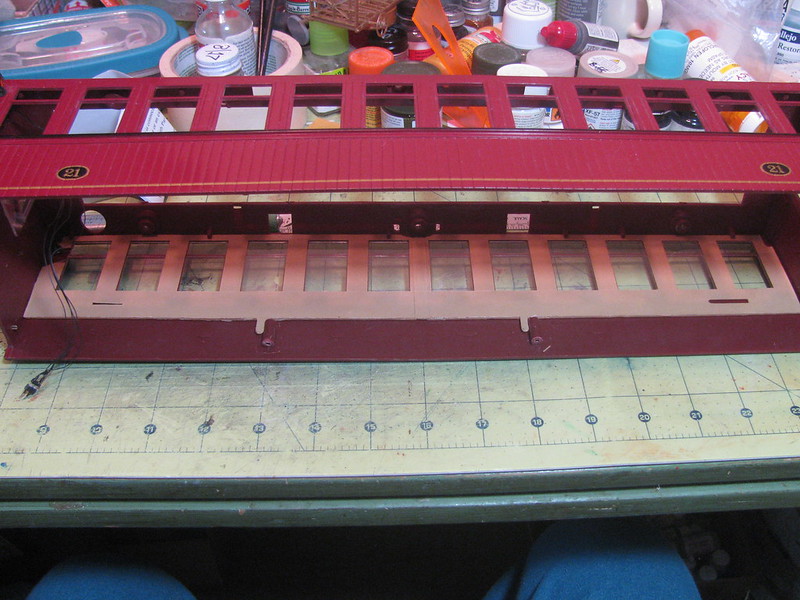 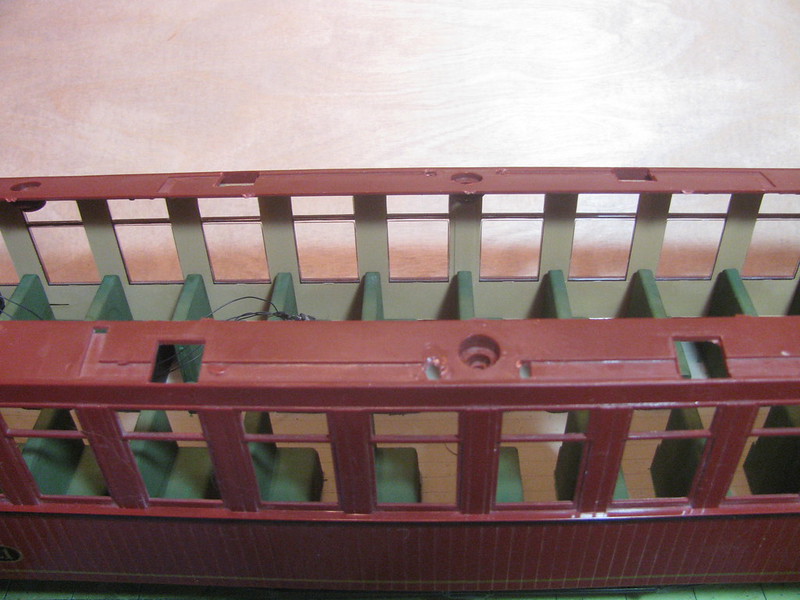 Clerestory lights in each of these cars are made from a cut of 5 LED from this kind of Christmas light set; 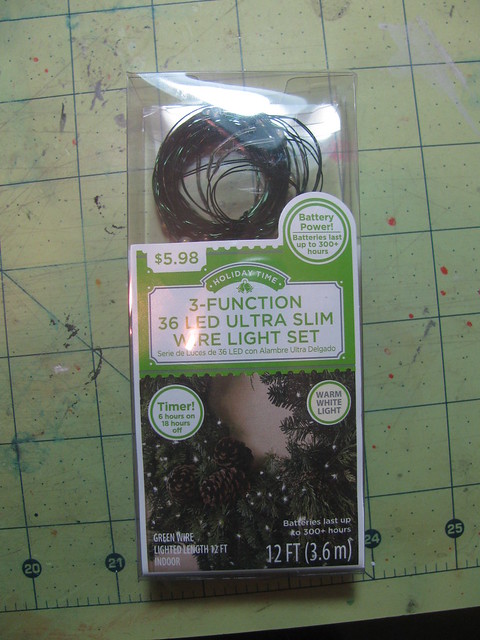 Today's progress is the Virginia & Truckee baggage car which has literally been waiting a decade for me to come up with how I wanted to do the job.
Yes, moving the stove was a back burner project.
Today the ideas came together.
So, now it has been moved from car corner to a middle location.
After the slightly off center center wall, its locating tabs, and the central roof attachment screw on that side, were dispensed with.
Various holes in car flooring are being filled.

Maybe in another decade or so I'll get around to painting the car's interior walls. 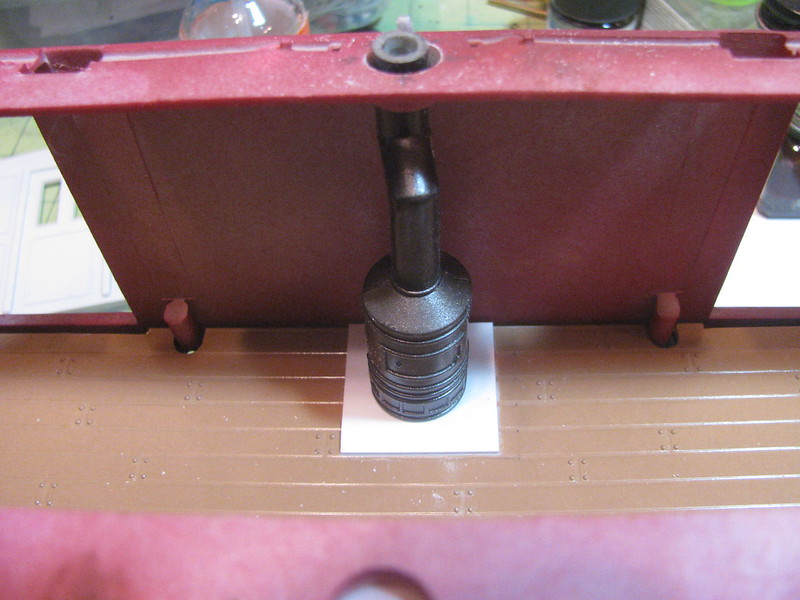