After seeing the comments on my stock car, rather than correcting the errors, and before I build a cattle car, I decided to order the cattle car that had been mentioned there in.

Before we get started on the revue of the LGB cattle car, I must explain to you all what the words mean; in the United States, the year of our lord 1906 a law was enacted to protect the meats that were entering our markets, this law required the haulers of said live stock to provide cars that were specifically designed for the cargo that was intended to be hauled.

The biggest hardship was not in the cost of so many different rail cars, but in the fact that these cars spent half of their time being pulled empty.

Prior to 1906 the cars doubled for hauling everything from dry goods to railroad ties, so the overall likeness to a box car was far more important to profits than the comfort of the live stock.

So in the picture of the 1860’s stock car and the 1920’s cattle car you can see the true differences.

I have not been able to procure the plans for the D&RGW cattle car, however it is not possible to measure this particular car with the intentions of rebuilding it.

In my opinion this car would have been built after 1920.

I did find it very cool that D&RGW used wood for their cattle cars for such a long time, it seems it would not have mattered, being that the cattle car could not have been over loaded, I guess the biggest issue would have been shear pulling weight.
But it shows that as where coal was a ready commodity, iron ore must have been scarce.

I’m sure for dragging around the back yard and leaving out in the rain for the $20 I spent, I probably wouldn’t care much, as you can see by the pictures the previous owners left it outside. No rust at all, just a bit of fading.

I was excited to see the couplers and the trucks, it turns out that the trucks are plastic, as are the wheels. The couplers are kadee, they are offset.

The brake system is very cool, it is molded in, although the cylinder looks like it can be removed.

The wood that is being used is basically 2 inches by whatever, and there is no framing of any kind under the car.

I did notice on the real D&RGW’s car that the car sits very low on the trucks. I assume this is because of curve radius, however it allows for no brake chain, and no possibility of adding one.

I also noticed on this car and the actual car that the trucks have been spread as far as possible. I’m sure this really helps with stability at speed. Most likely pointing out that both this car and the one in the picture could be a much later version.

The fact that the entire car is built with 2 inch by 4 inch boards makes it nothing like the original car. This is pretty much seen throughout the car.

The doors are functional, I do really like the door stops, they are the same as the original. The door tracks are nothing like the original car, and the door handle places the operator in between the car and the loading ramp.

All of the grab irons are just molded in, I’m sure replacing them would take very little effort, as well as extending the brake wheel.
The car seems to roll just fine, nothing like the Bachman’s metal trucks and wheels, however just fine.

So as far as a backyard runner, it looks like it’s going to work just great, but as a static display it’s going to take quite a bit of work to earn it’s own shelf.

I was very surprised by the weight, I suspected that it was going to be heavy, as I read that hand built cars tend to need weights added to them, it turns out that the hand built car is 3 times heavier, even with the metal trucks and wheels removed the hand made car is heavier.

It is a beautiful car made in Germany and if I had an actual lay out I would enjoy running the wheels off of it. 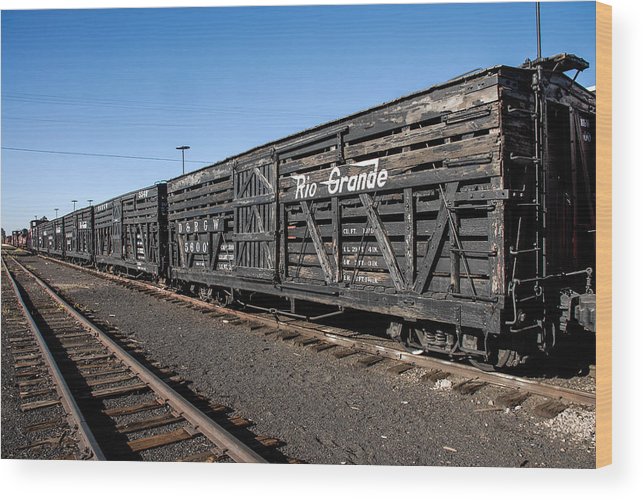 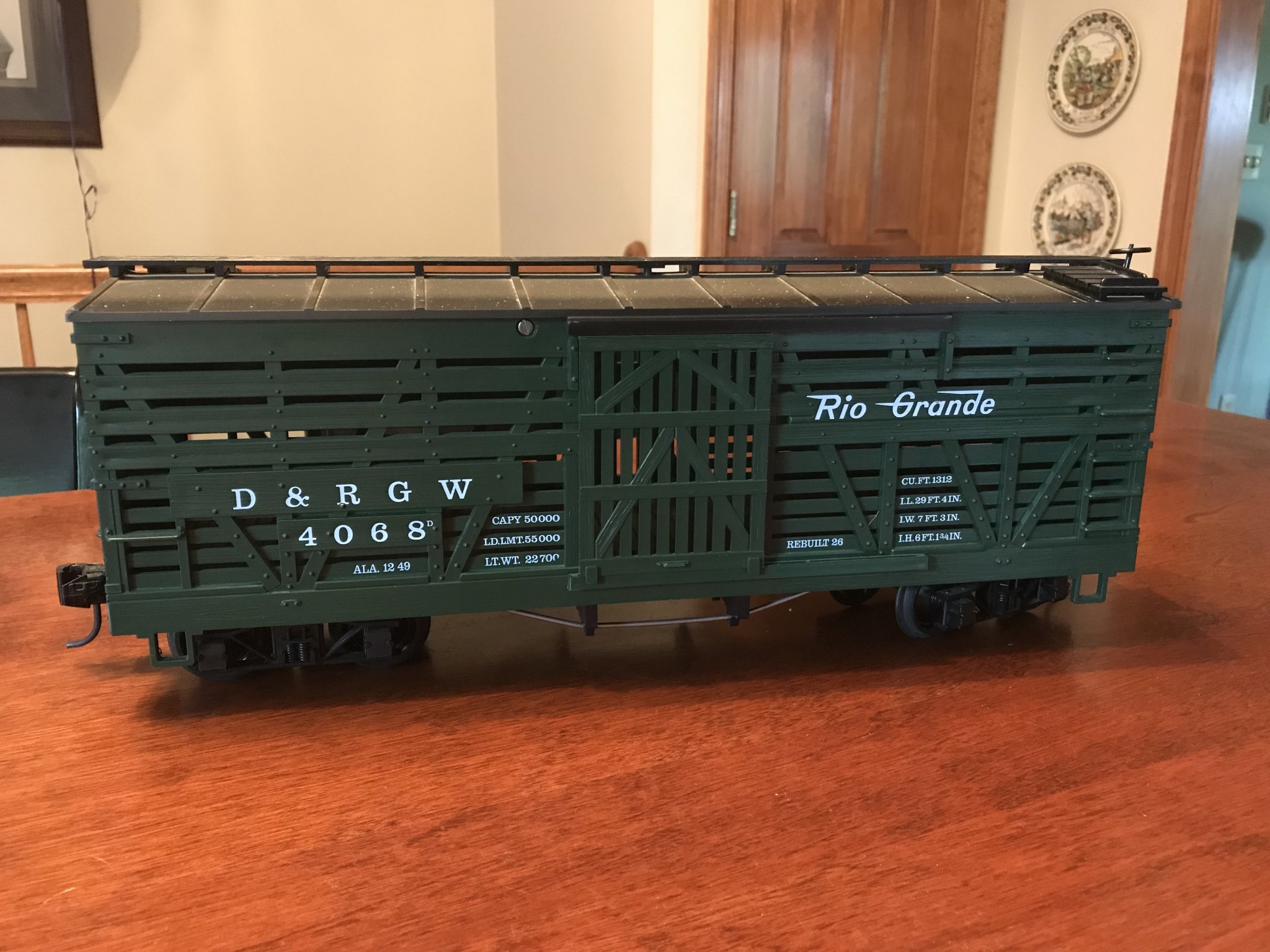 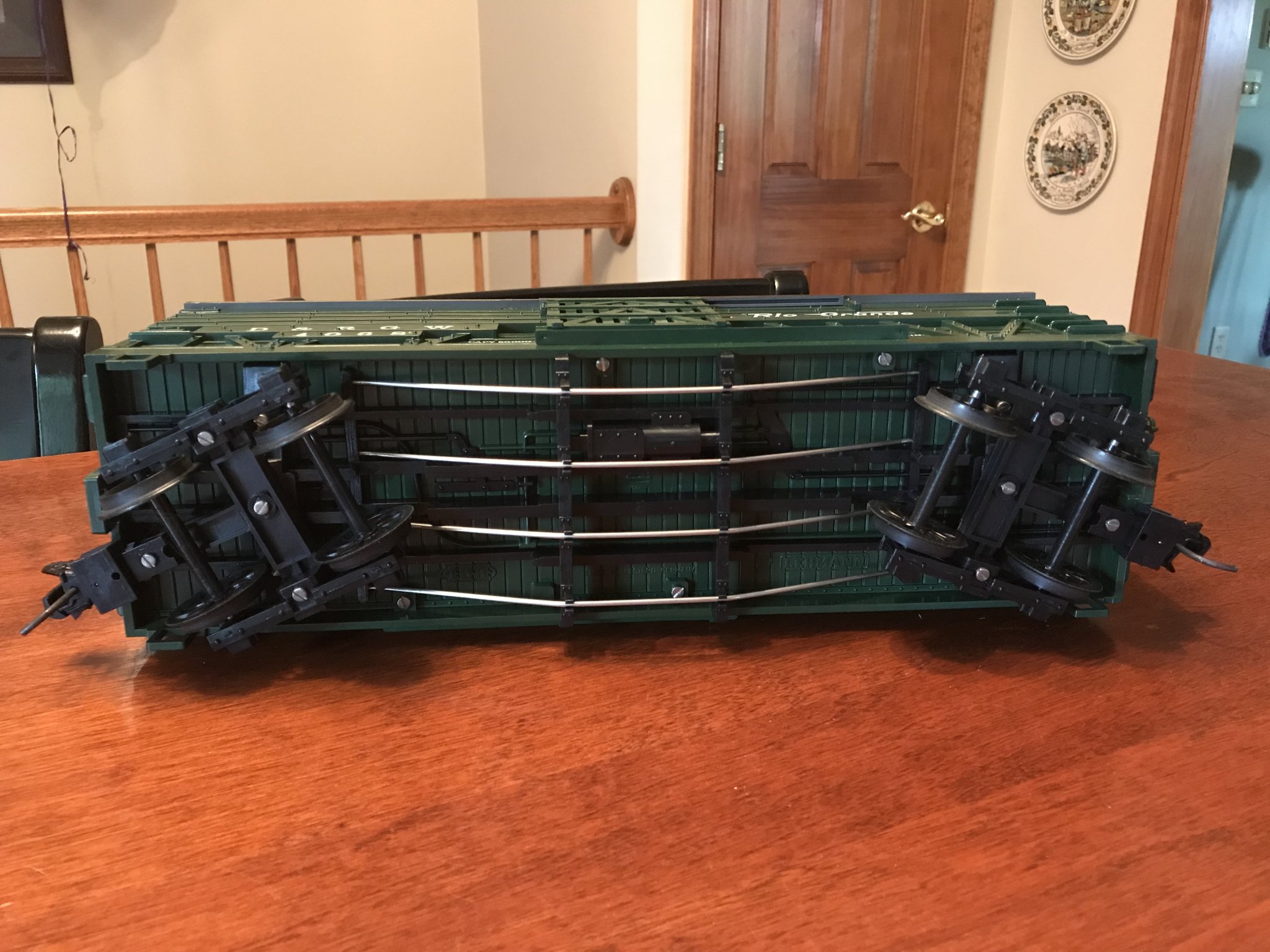 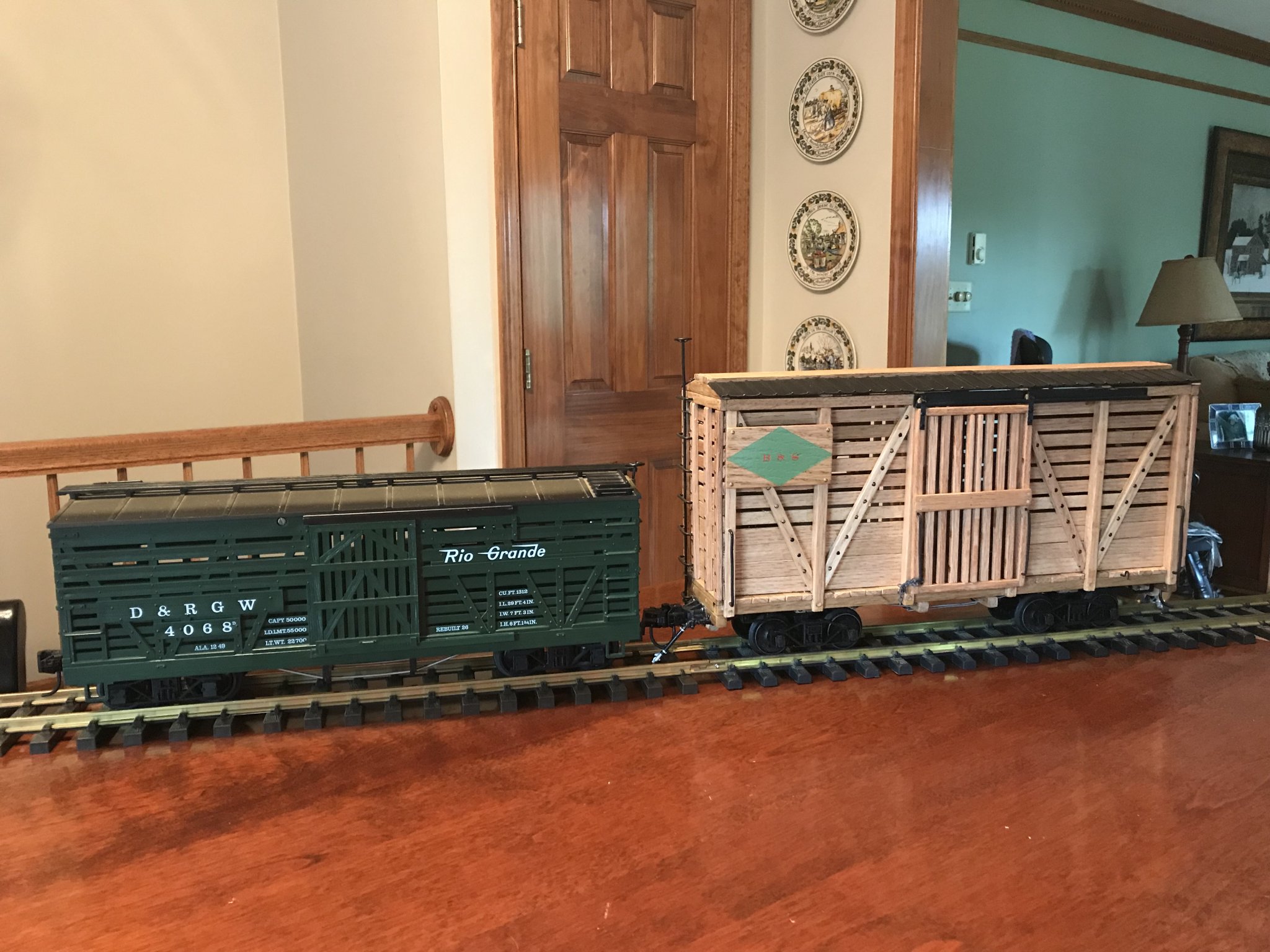 The one on the right for giraffes or just long horns?
Expand signature
Phil S
Reactions: lgbmad
B

Phil,
What a great question, for someone that can not read you seem to navigate through this website well.
Taking a look at the average height of a giraffe, that’s 19 feet, for both male and female, and with an average neck length of 6 feet for both male and female, that means if you cut the neck off at the body, you would still need to break the legs of the giraffe to get it into the car on the right.
Now the smaller car made by LGB, not even a baby giraffe would fit in that car.
Now reading comprehension should tell you that the LGB car can only be used as a cattle car because it would have been registered as a cattle car, now being that I was researching the Goodyear’s at the time of building the car on the right, I wanted to placard the car as hog car 1, however the law would not allow me to do that, so I refrained.

Now Phil take a look at why the laws, or restrictions were placed on the railroad and I do not only mean the car usage, but all labor laws as well, I would think it be a blessing that we are not using these cars for multiple purposes any longer. I am imagining the small children packing potatoes into a three deck hog car, well just take a lesson from your local nurses for the reparations from that. Everybody’s gotta eat.
So I guess it comes to this Phil, I’m going to continue building from the incredible plans provided by John White, and am not going to allow LGB or any others to dictate my railroad, or my right of ways.
I do hope to see your railroad some day, this is very exciting for me to get a chance to share the models and to see the incredible talent that this site has, unfortunately for me, through the times I’ve lost so many photos, and I would rather continue building my hobby and skills, rather than driving all over America trying to get reacquainted with all the models and dioramas I’ve built. Actually Phil it would kill me to have to pay to go visit my models.
And once again thank you for the wonderful question.

You be responsible with your drinking, and have a great day.
Dan

I don't care what you put in it! - It is a beautiful model!!

Research is all. It's also very apparent how much better real wood looks as opposed to moulded plastic. A smashing model
P

Blackreed said:
What a great question, for someone that can not read you seem to navigate through this website well.
Click to expand...

Whoa there Dan. Ease off. The giraffe comment was just meant in jest based on the disparity in height between the two wagons. It was not a comment on your modeling skills. By the way, my reading ability is just fine - I even comprehend some of it!

Edit added: I just took a look at Dan's "Stock Car" thread for the first time. I would not have repeated it had I realized the giraffe comment was already made.
Last edited: 25 Aug 2019
Expand signature
Phil S

I took it as a jest also, no need for insults. This is a friendly forum. Insults can be easily had on many forums here in the USA.

For anyone truly interested; you might note that on the LGB "Cattle car/stock car", there is a small "D" at the end of the car number. On the prototype car, this indicates that the car has a second deck, although the model does not have one. The second deck was used for sheep loading, increasing the number of animals the car could accommodate.
The model looks much better when body mounted Kadee couplers are properly mounted, as those truck mounted offset shanks look like hell and are not in any way prototypical...however...whatever turns your crank, the saying goes....!!!
Expand signature
Sir Frederick James Percy Mills

phils2um said:
Edit added: I just took a look at Dan's "Stock Car" thread for the first time. I would not have repeated it had I realized the giraffe comment was already made.
Click to expand...

I was the one who made the original giraffe reference. I have been sorting through my Tri-ang collection and just that day had been testing that my giraffe car worked. For those who don't know them, the giraffe ducks down to avoid bridges. 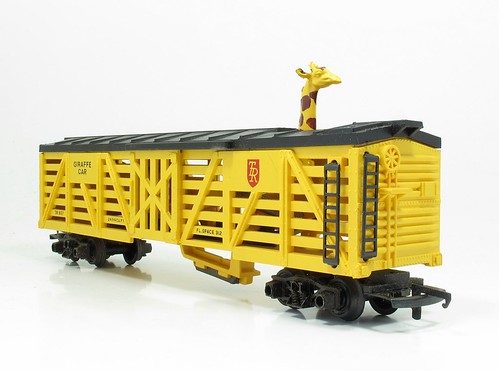 There is the Bachmann model as well, which is actually more true to the D&RGW than the LGB variety if a little customisation is applied.
I used the Bachmann model for my motorised helpers (motor blocks with DCC control on board) and also to customise them to appear more how the D&RGW ran them.
( a run down of how I did the transformation is here: Motorising of some rolling stock to 'help' weak locos up slopes. - G Scale Central)

I chose the Bachmann version to customise and motorise over the LGB jobbie because, firstly , the name boards are easy to remove for replacement and secondly, it has one feature that made the the motorising a little easier...a removable floor!

They all have QSI \live action' sound cards that 'moo' more when the car is moving.


Bachmann stock car as it is out of the box 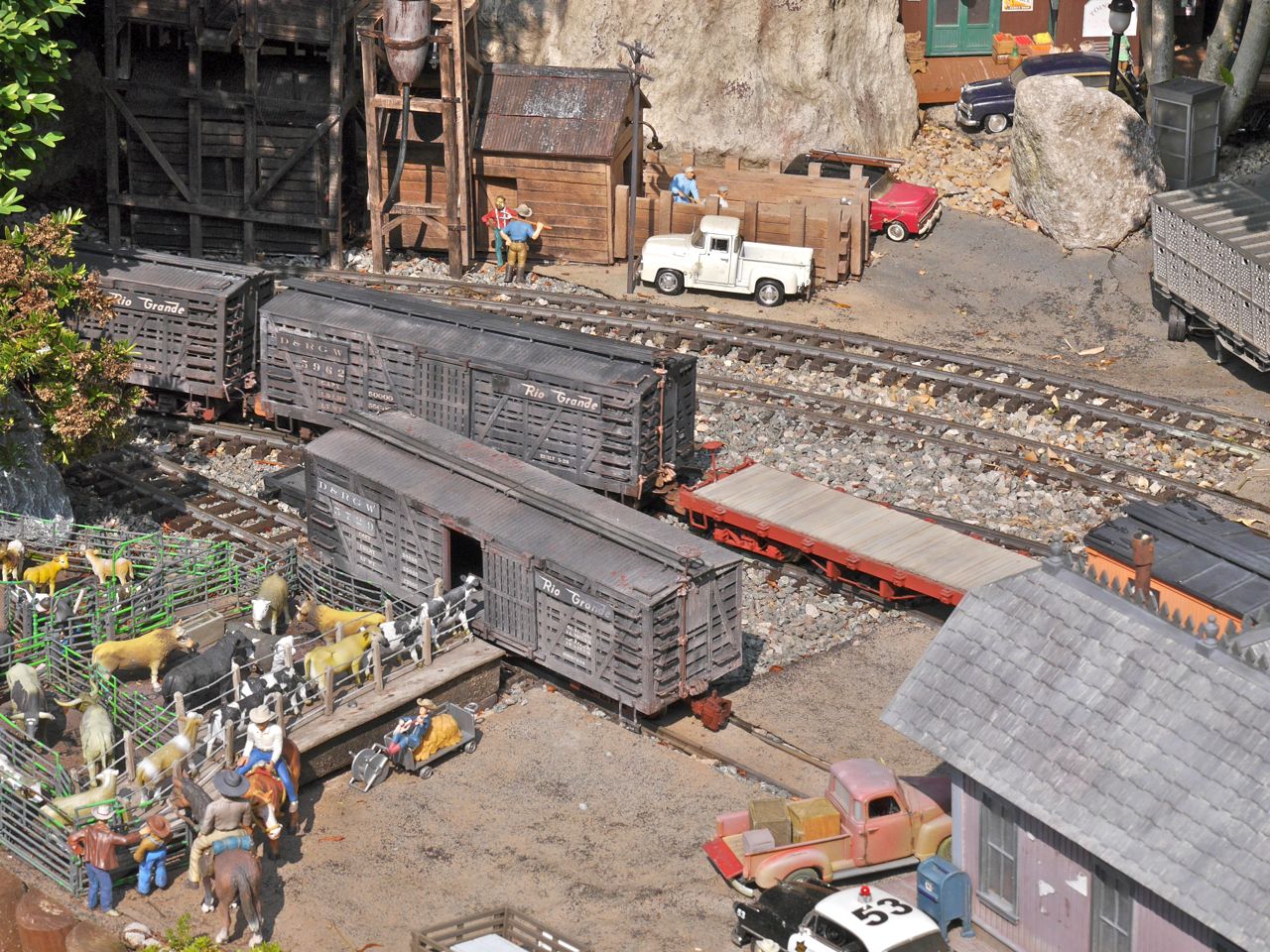 One of the customised stock cars stationed at the more recent wooden updated stockyard at 'Pointrock' township. 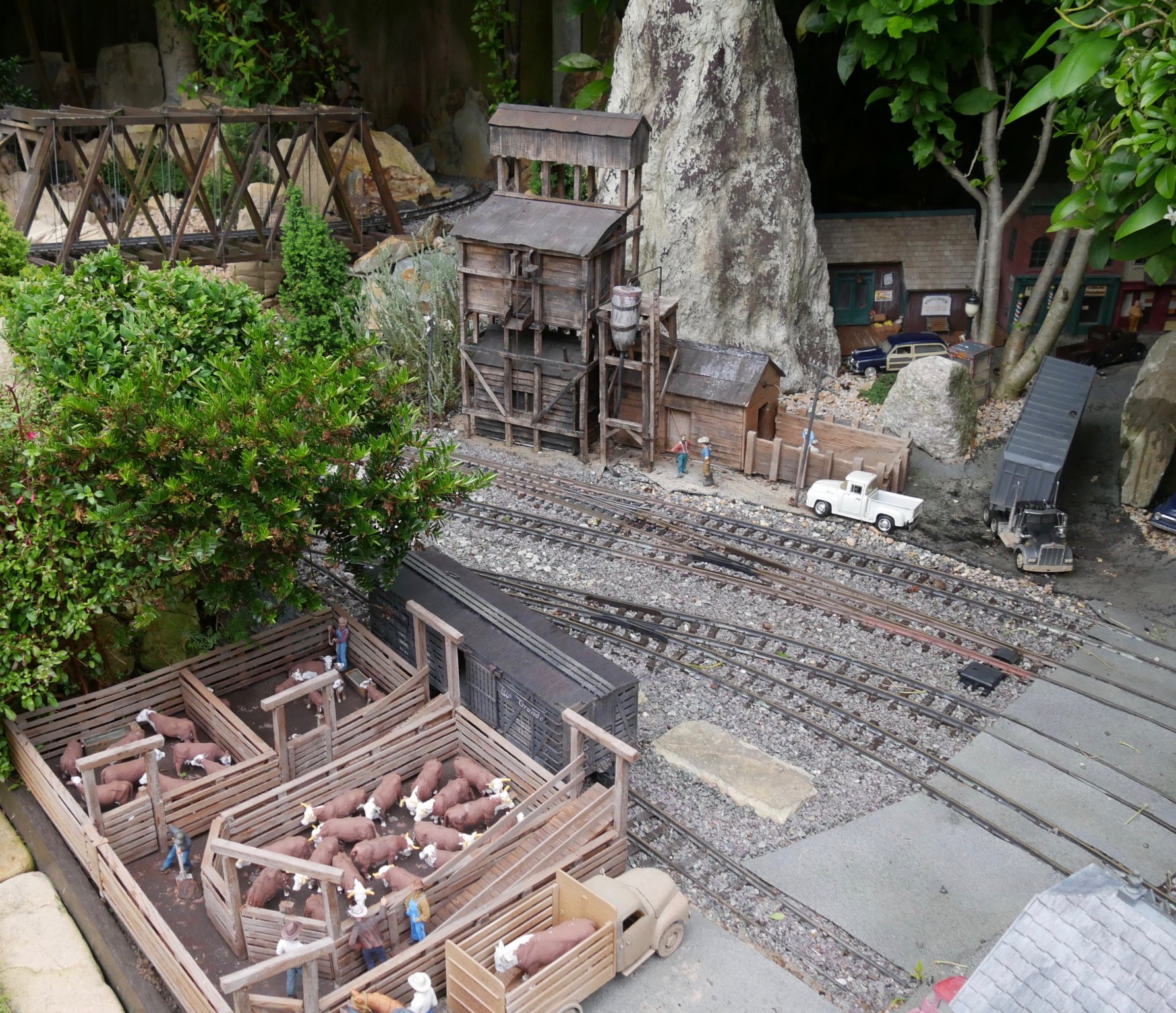 "Never discuss or argue with an idiot. They will drag you down to their level and beat you with experience.”
Reactions: lgbmad

And there are the AMS (Accucraft) Fn3 versions too - they did both the cattle and the sheep (giraffes with very short necks and legs, both are ungulates) double deck, versions. They are arguably the most accurate of the larger scale mainstream offerings.

I agree that all wood construction of wagons has a certain quality that grained plastic cannot achieve, having built a few woodies, Hartford and Rio Grande included. However when running them it barely notices at a modest distance. Pity. Max
P

maxi-model said:
However when running them it barely notices at a modest distance. Pity. Max
Click to expand...