Afternoon All,
Having spent most of the last few weeks on "light duties" and having got fed up at looking at my LGB HSB 905 van, well out came the LGB rubber ruler correcting equipment, the hack saw!. 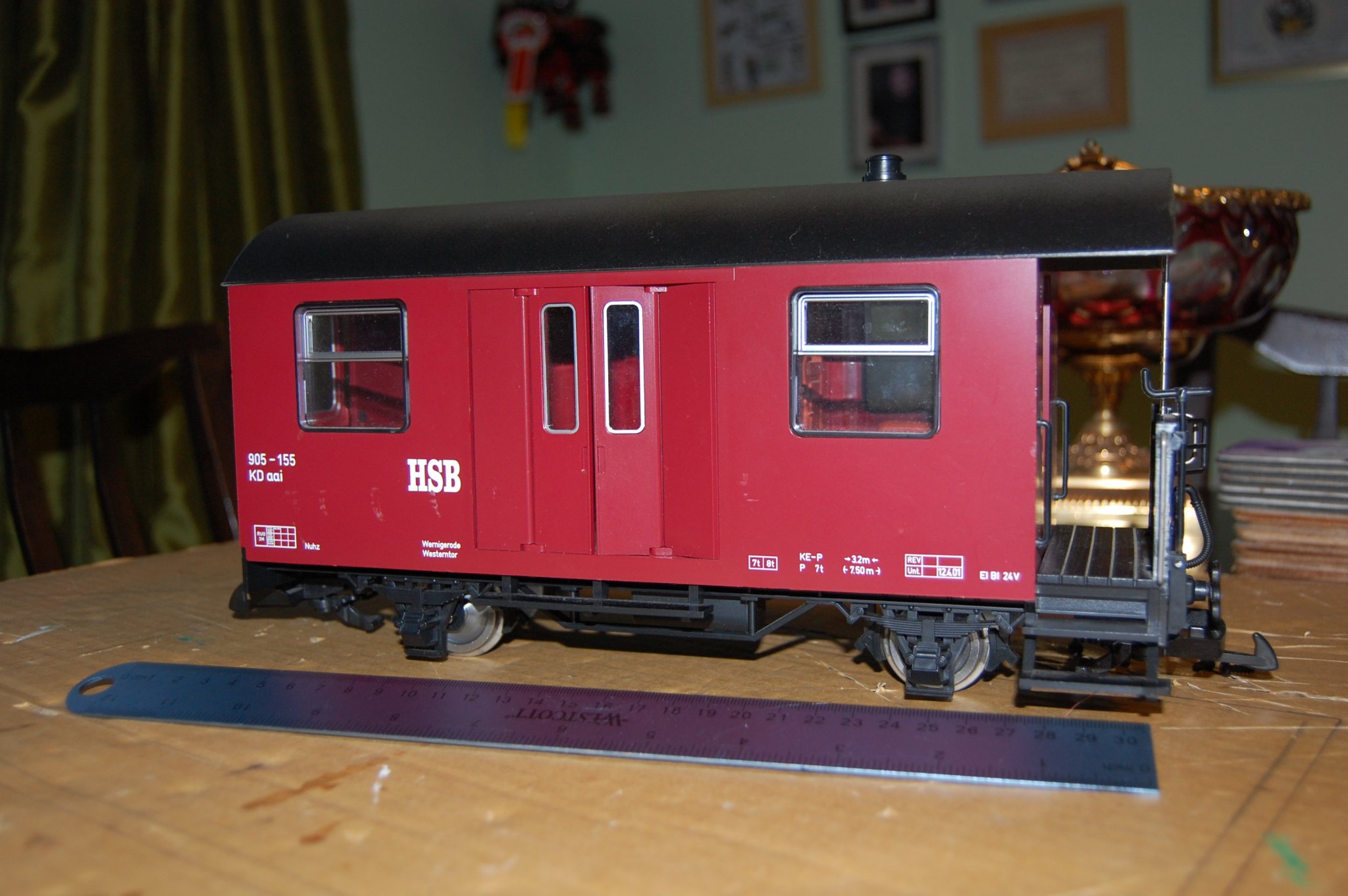 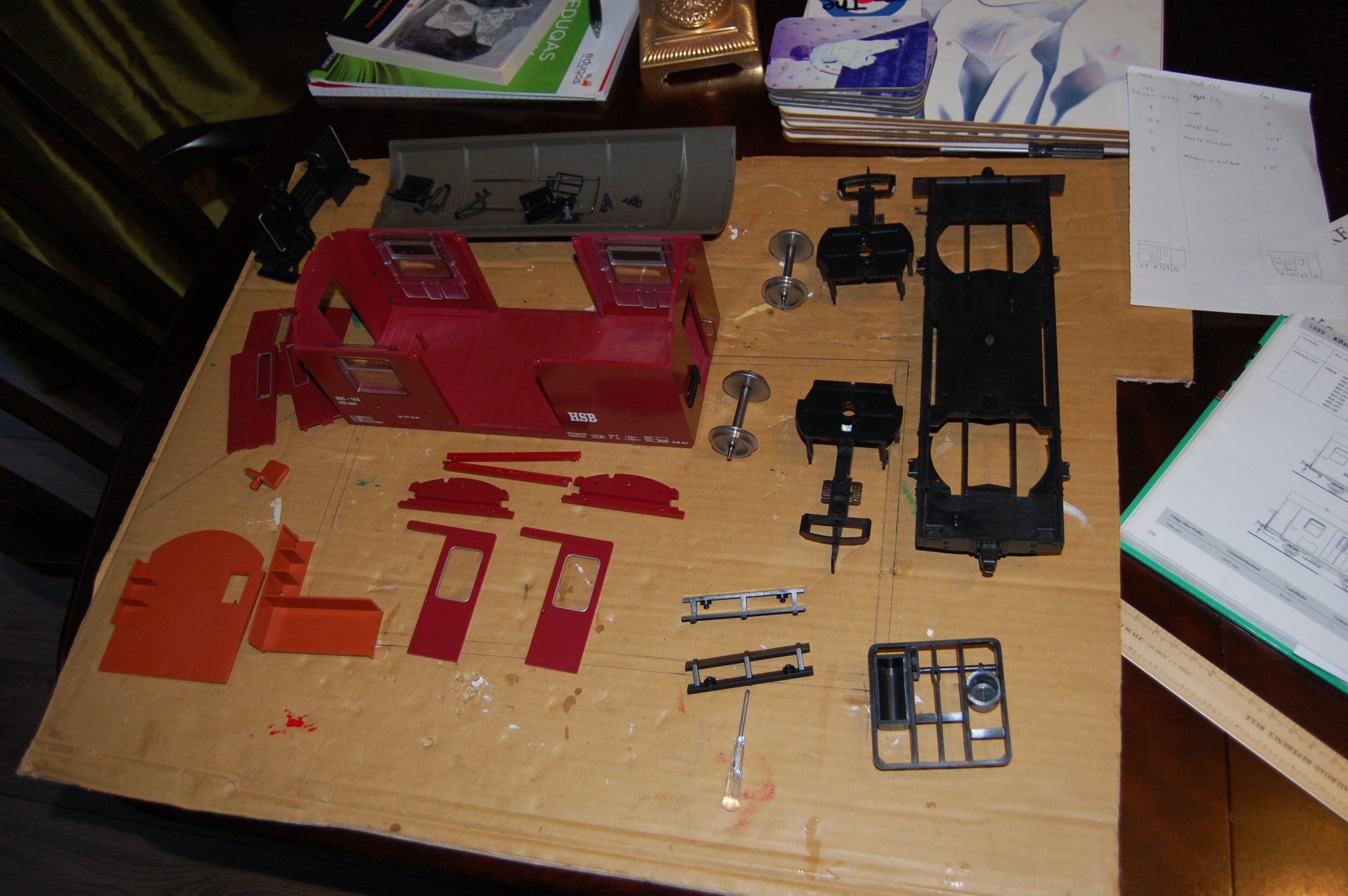 Running the measure over the body, the extra 1'6'' was in the bi folding doors, so basicly cutting the top and bottom door rails fixed this also at the same time removing the body floor. 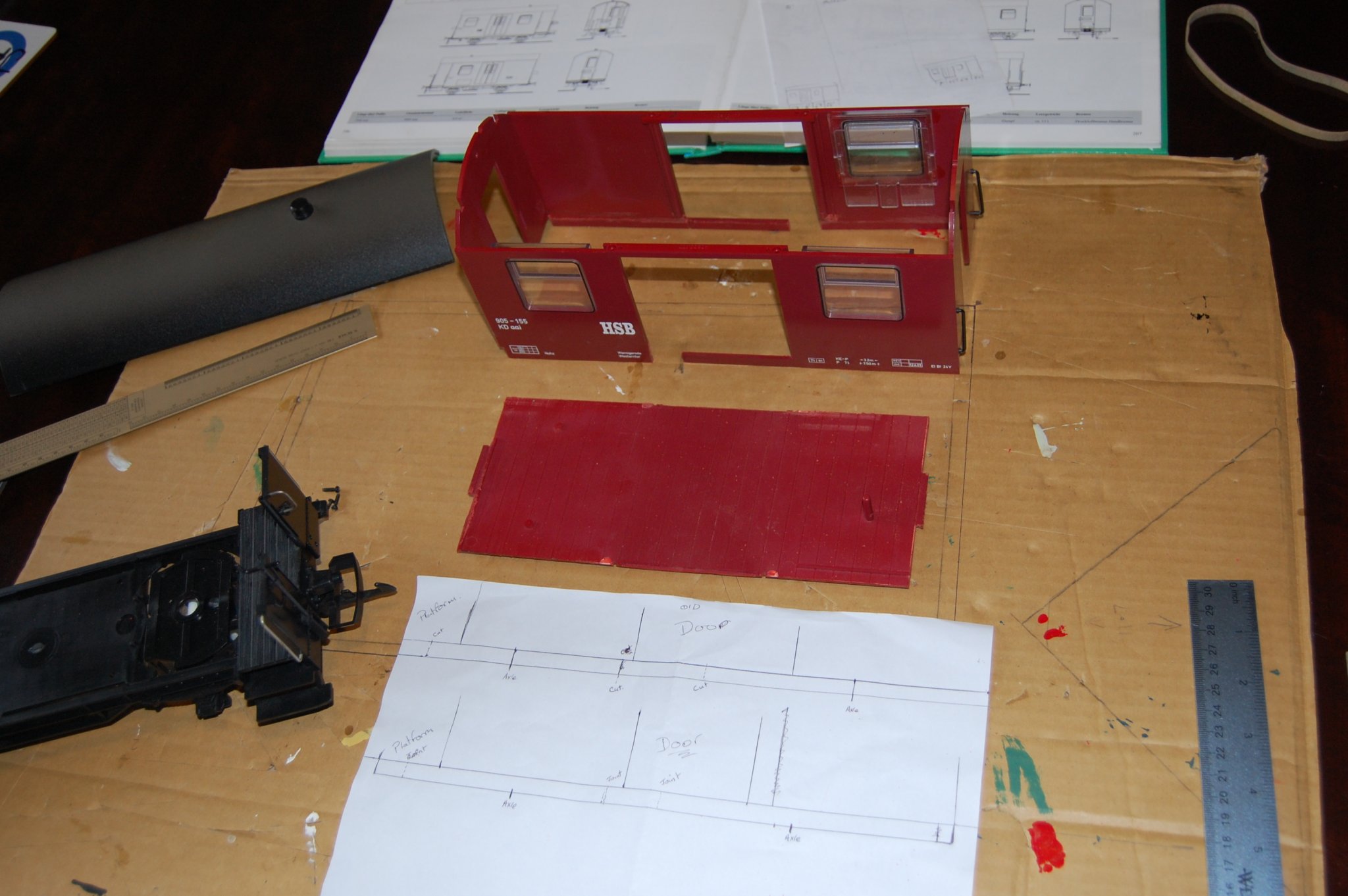 the paper below shows the cut lines for the chassis. the floor was shortened and refitted in the body 5mm higher in order to lower the body, this makes the bi folding doors unusable, something else to think about! 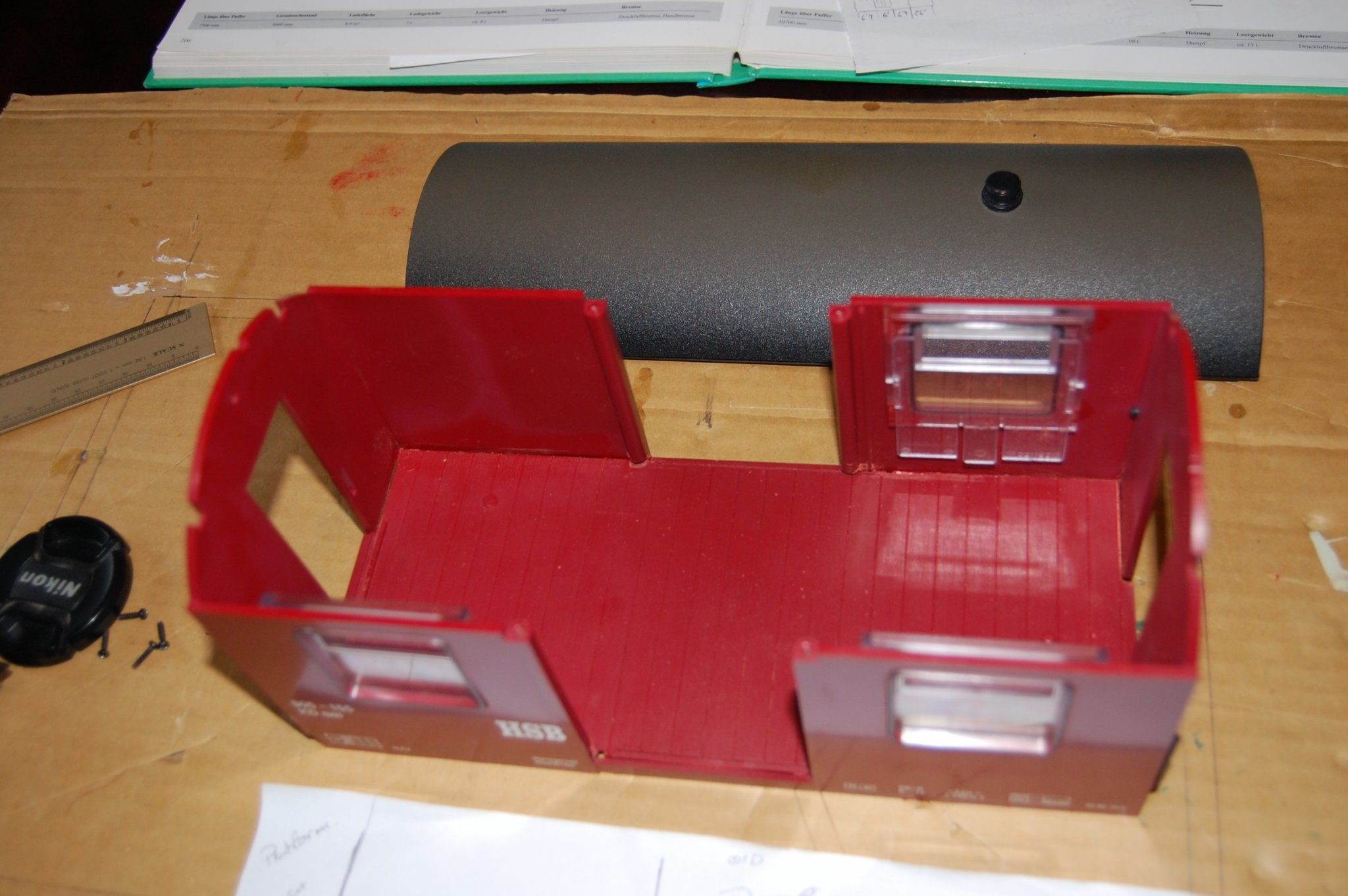 with the body now the right length, the chassis was chopped up and the axle boxes turned 180 degrees to give the correct wheel base of 10' and the reduced gap filled with off cuts and angled plasticard 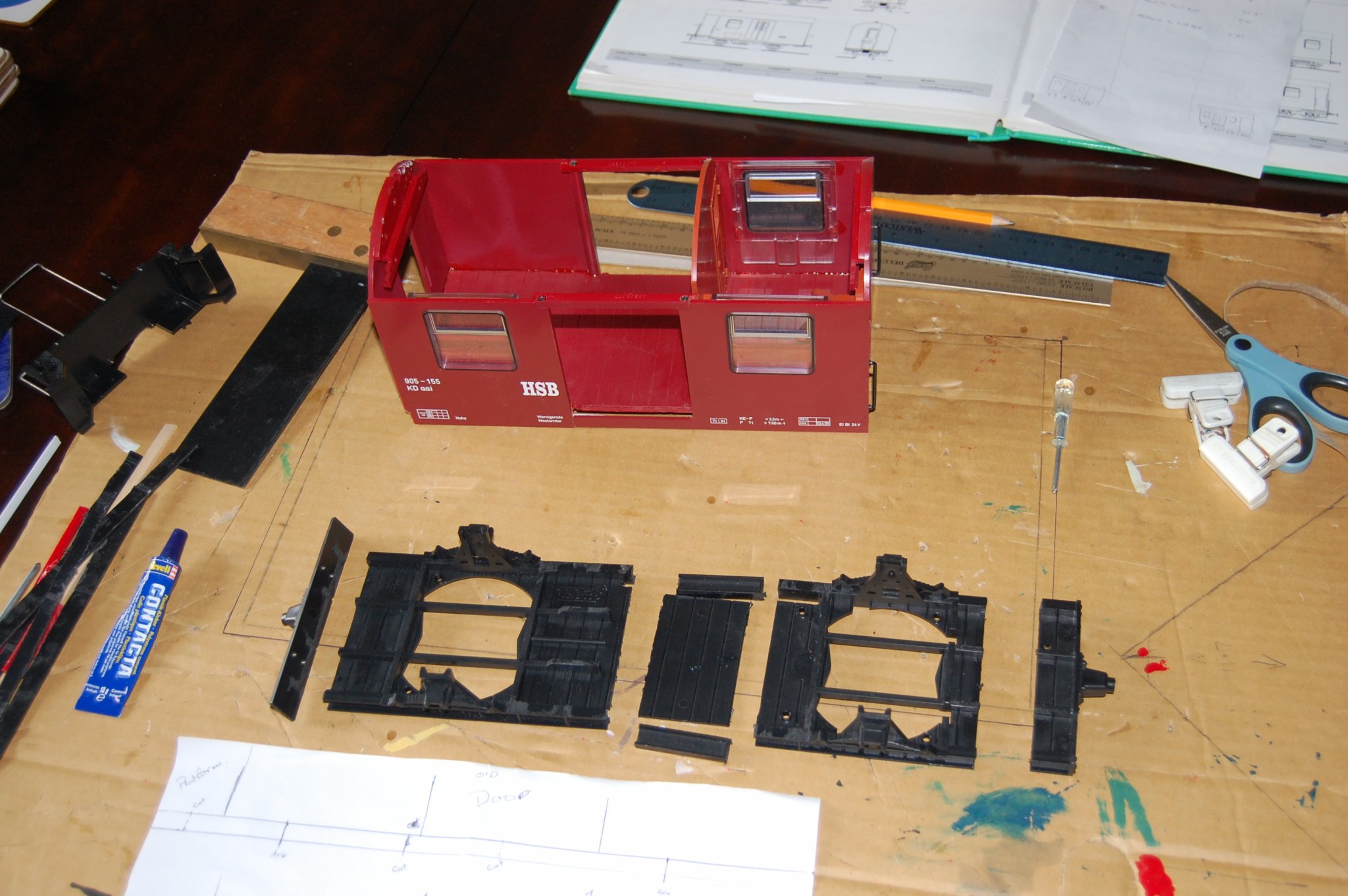 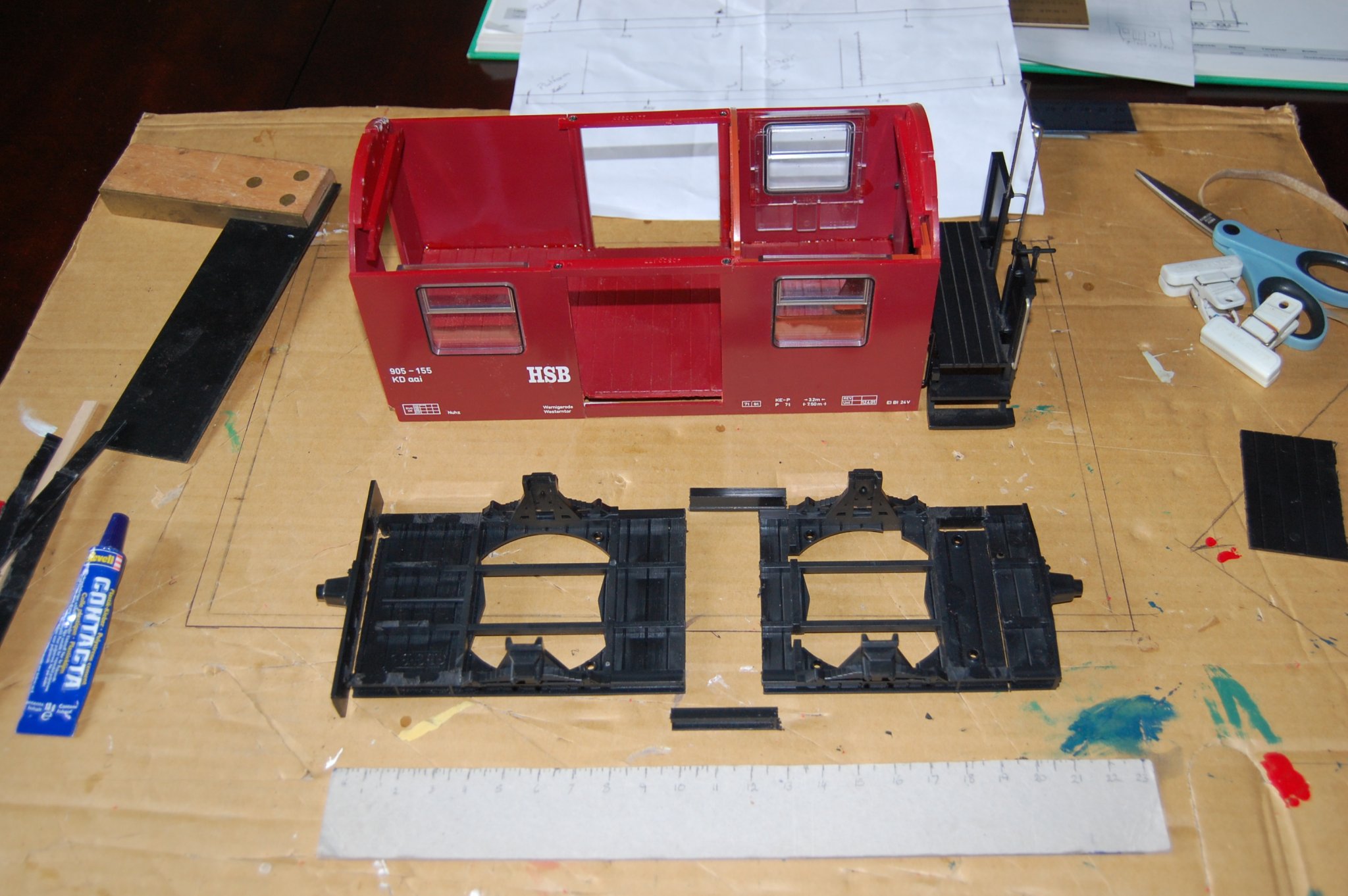 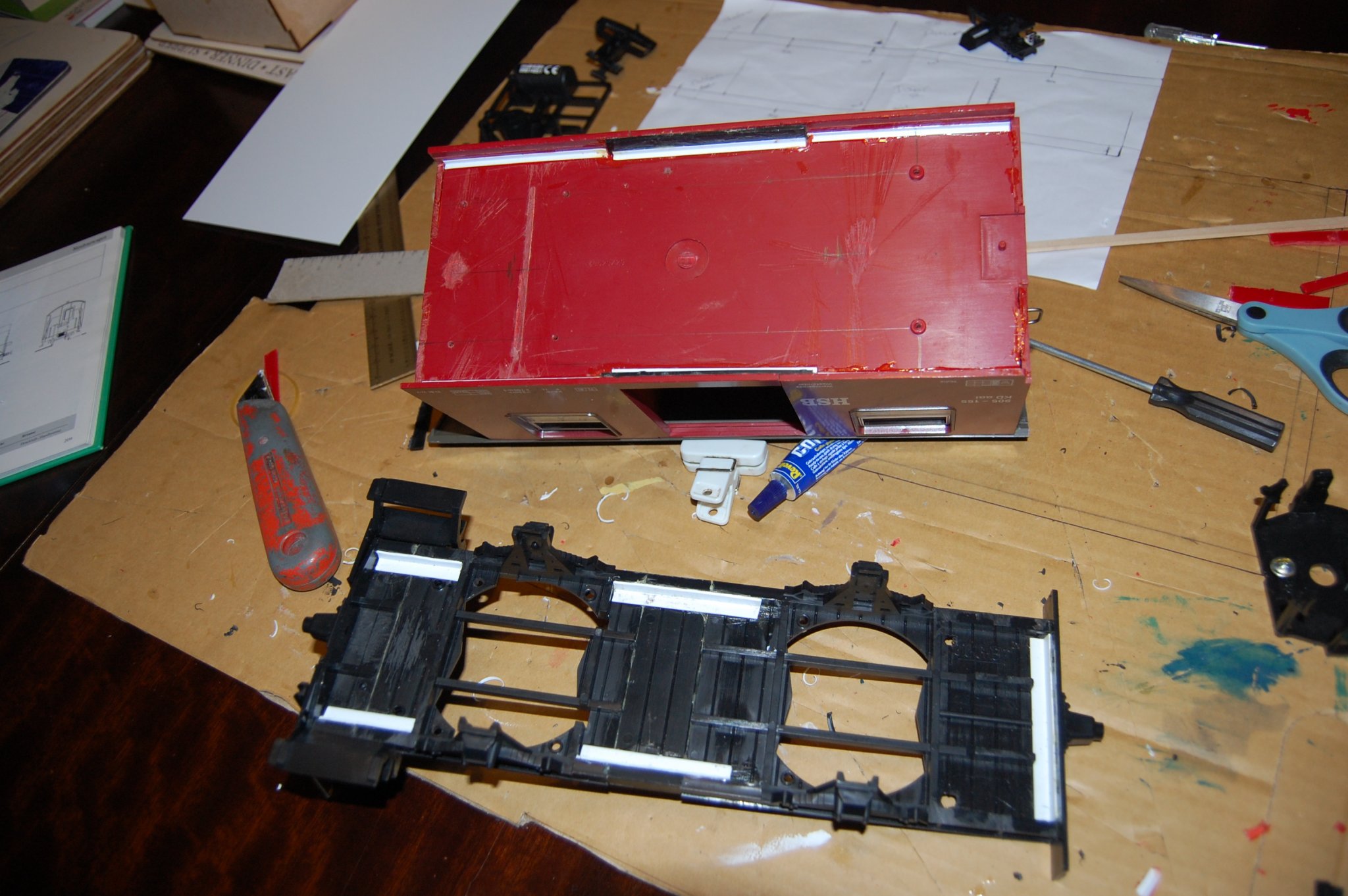 also the existing pivot points were removed from the floor to re glue later once I was sure it was as I wanted it. The couplings were extended to correct for the new wheel base. I also put 2 screws to form a self centring for the independent axles as some times the wheels do not correct after a curve. 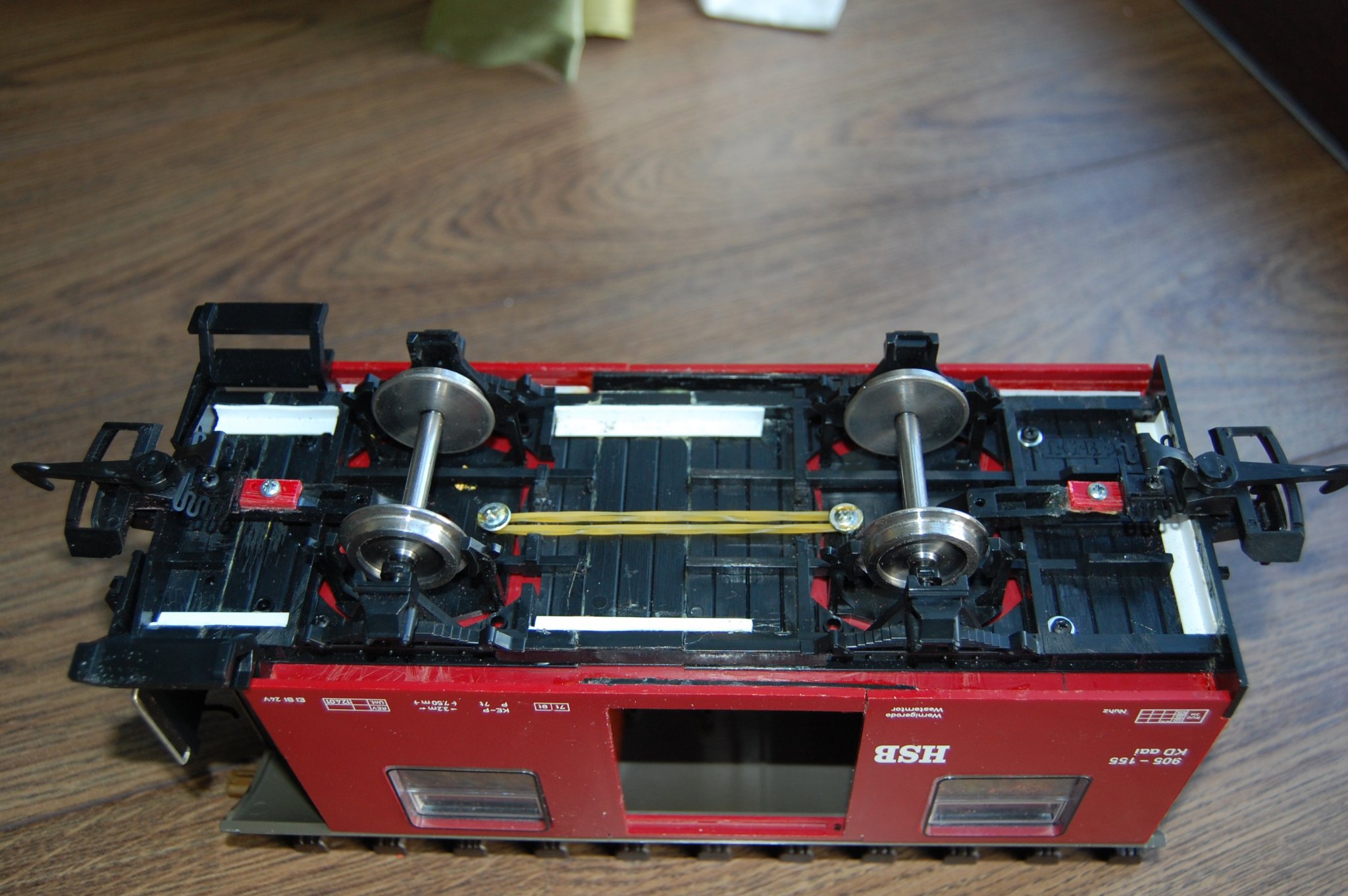 New non folding doors were mocked up out of card before making new out of plasticard. 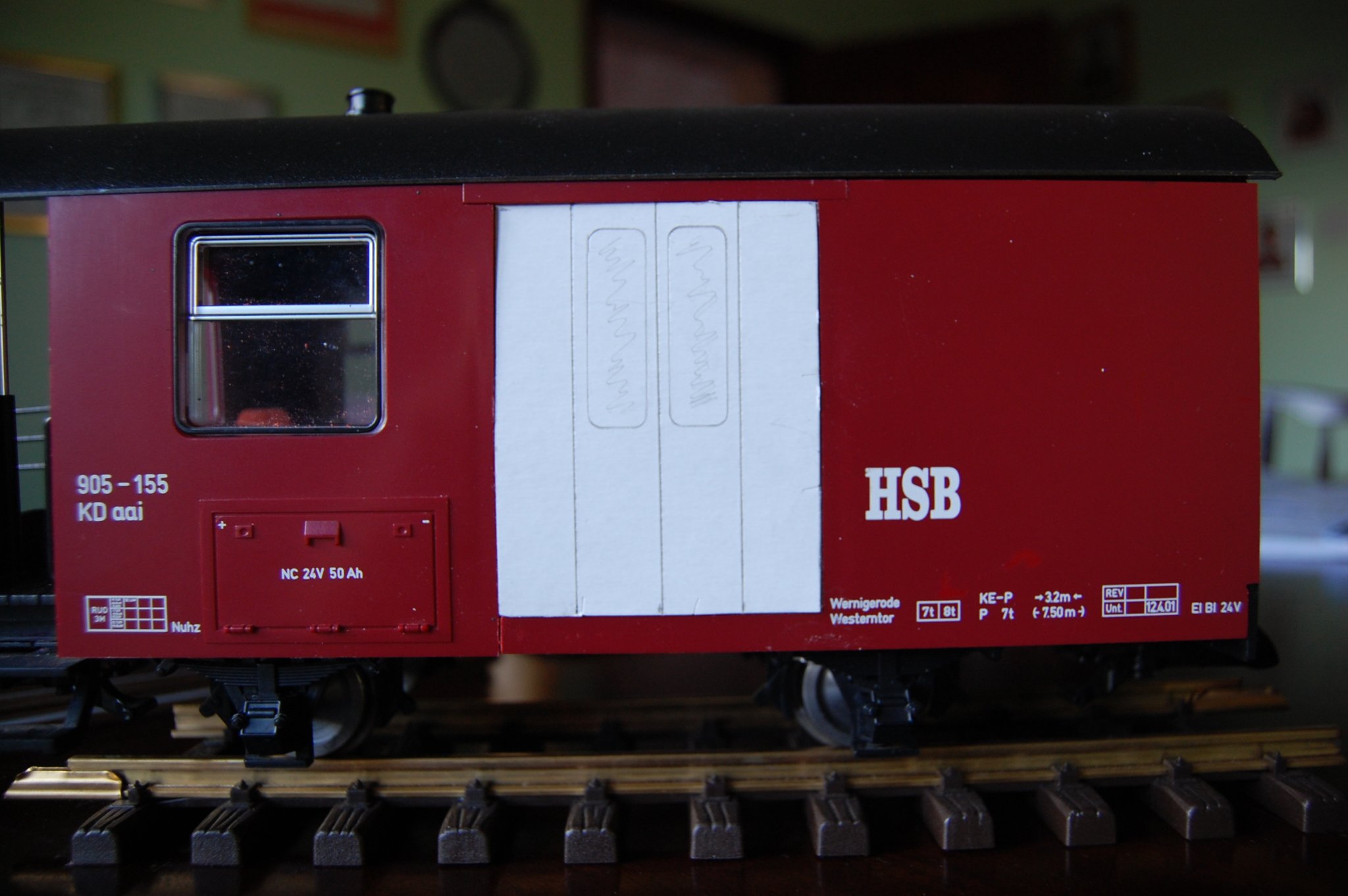 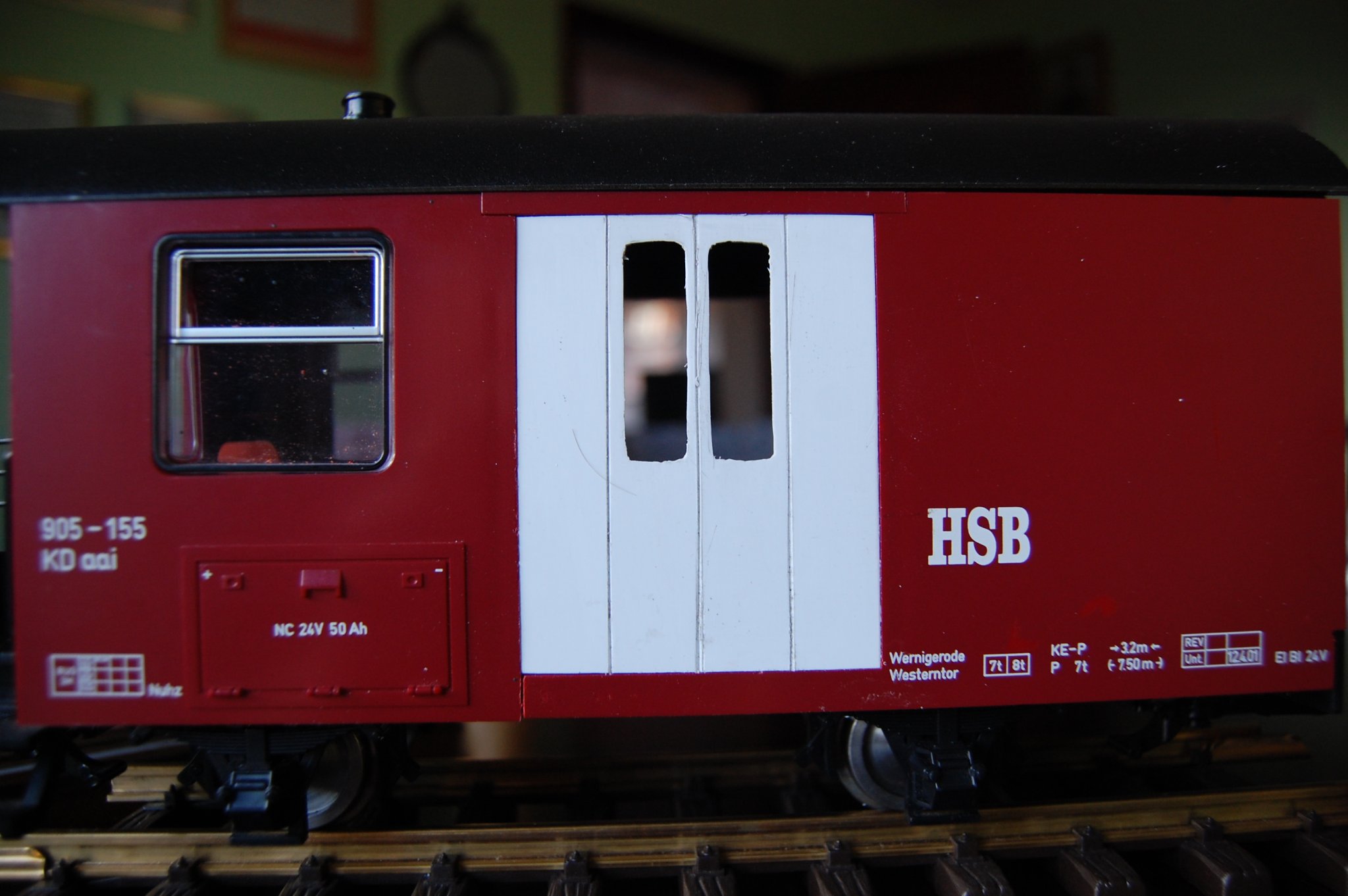 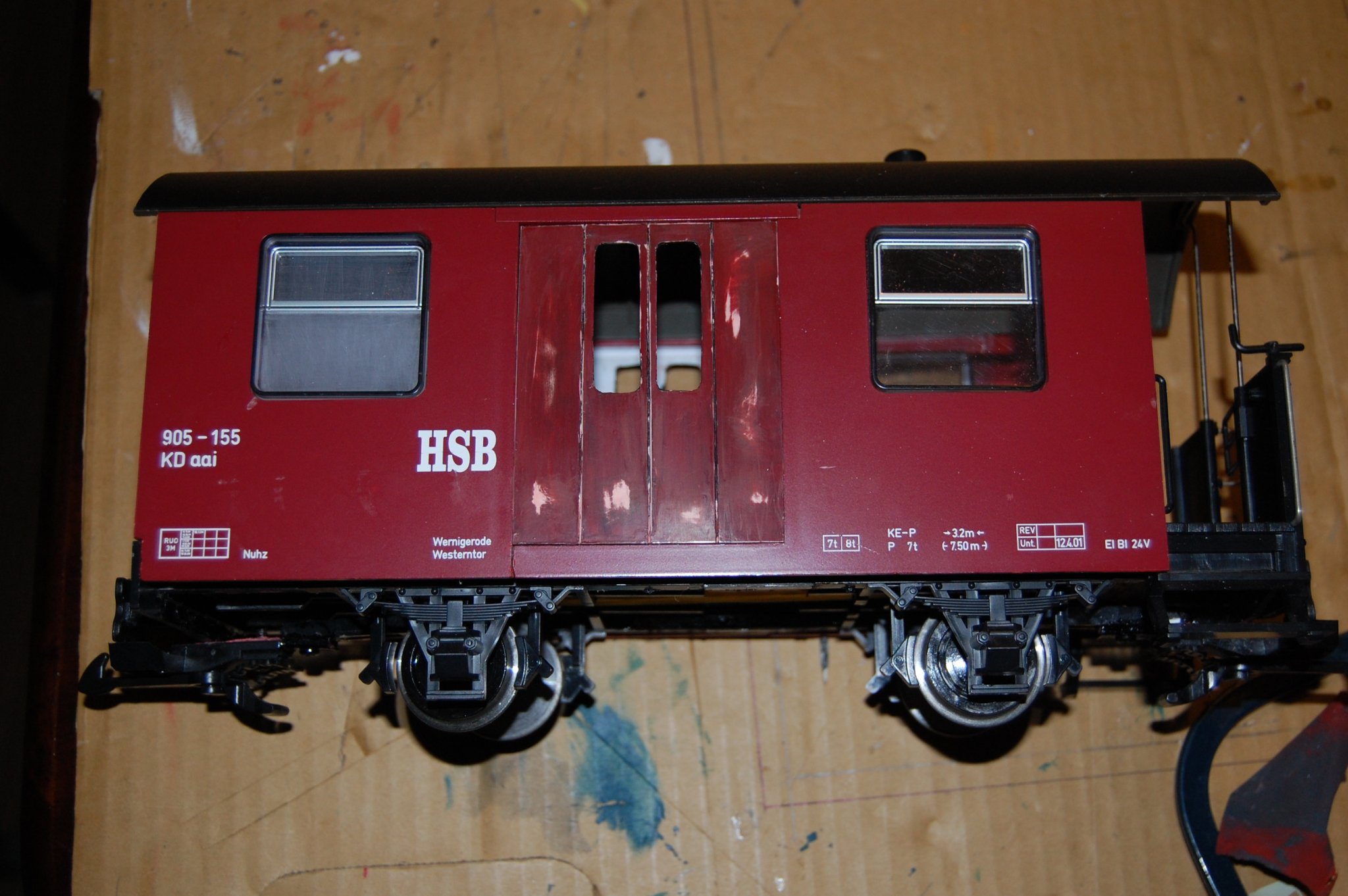 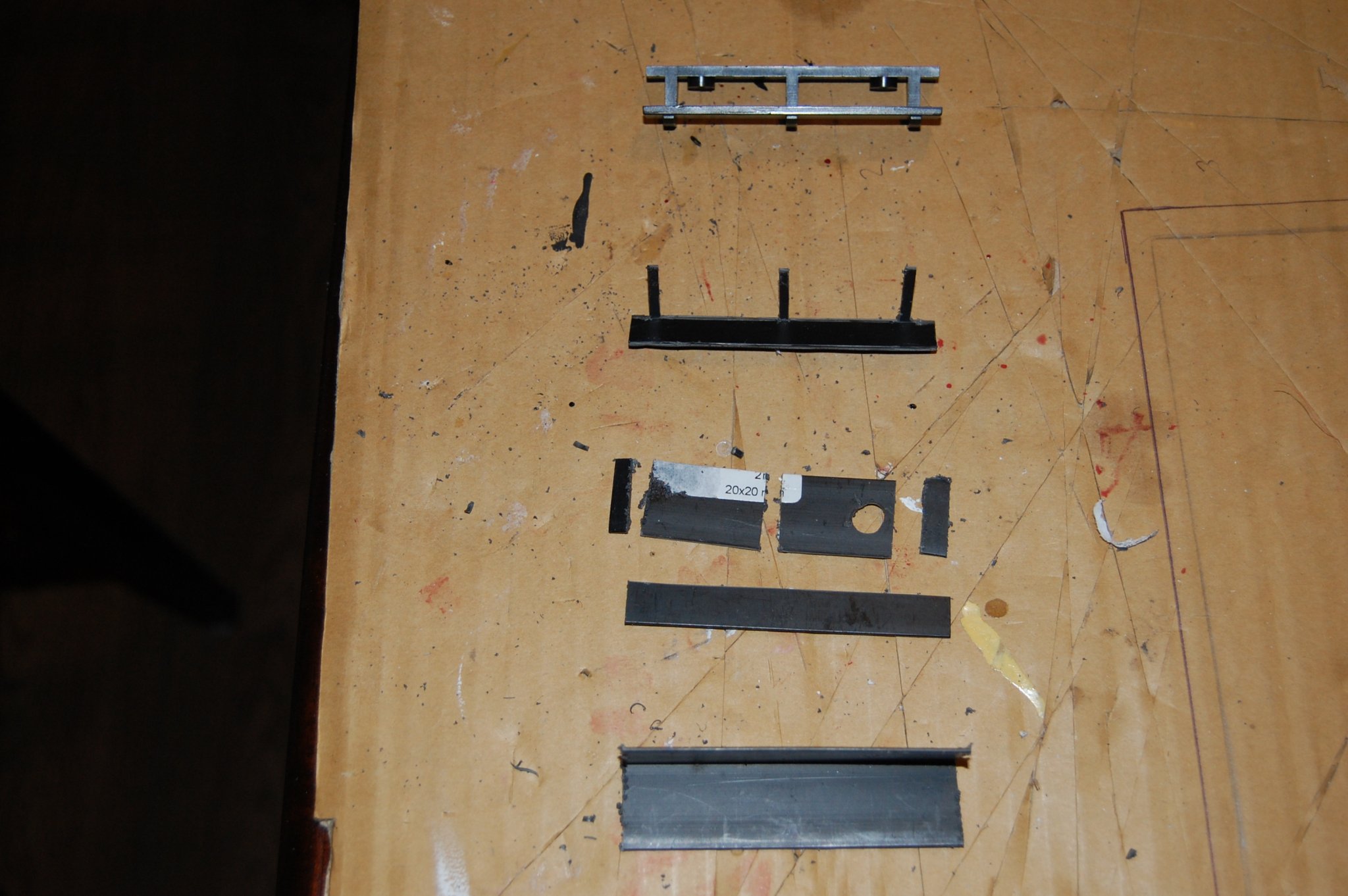 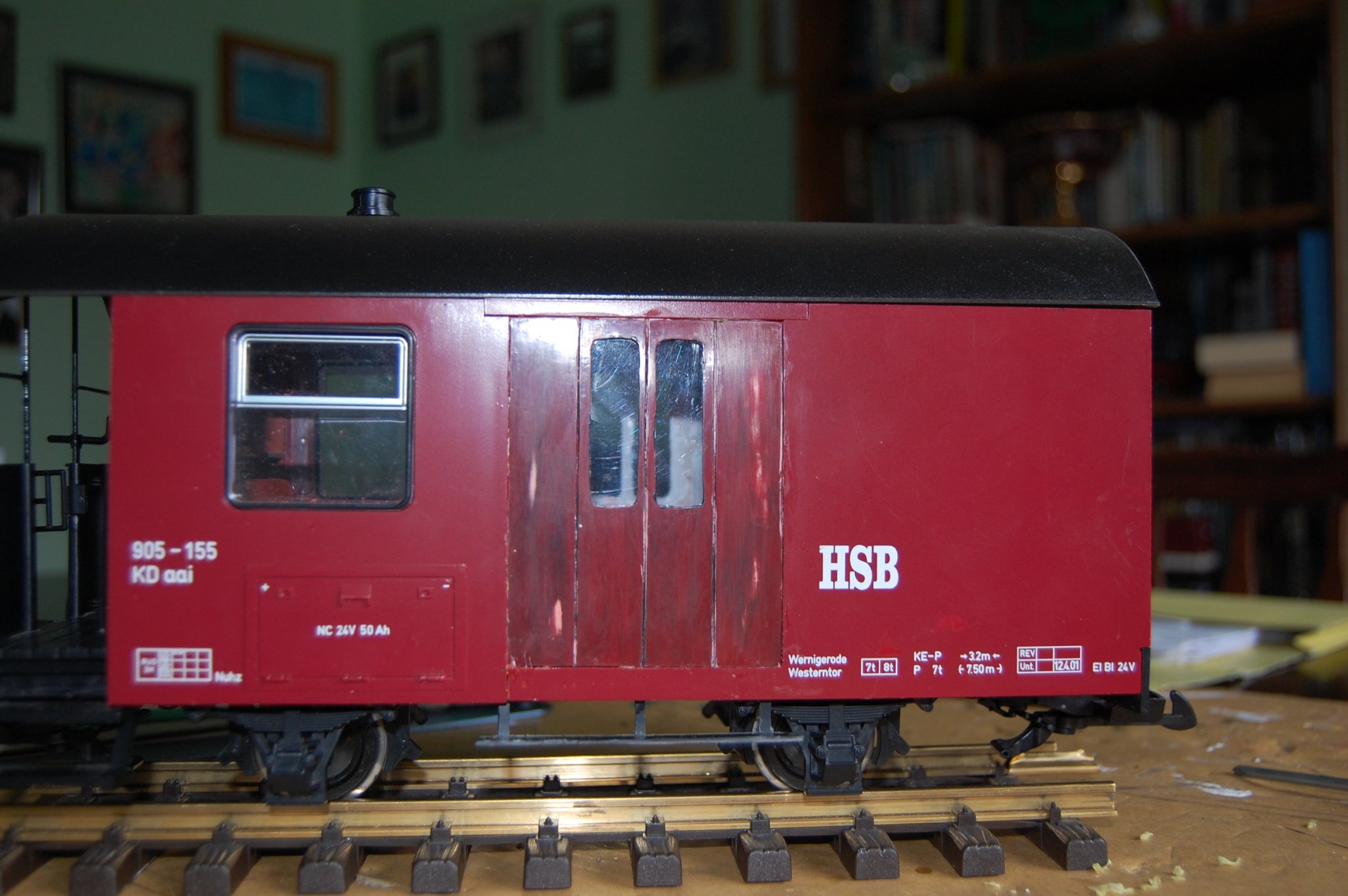 And with some more hand rails the job finished 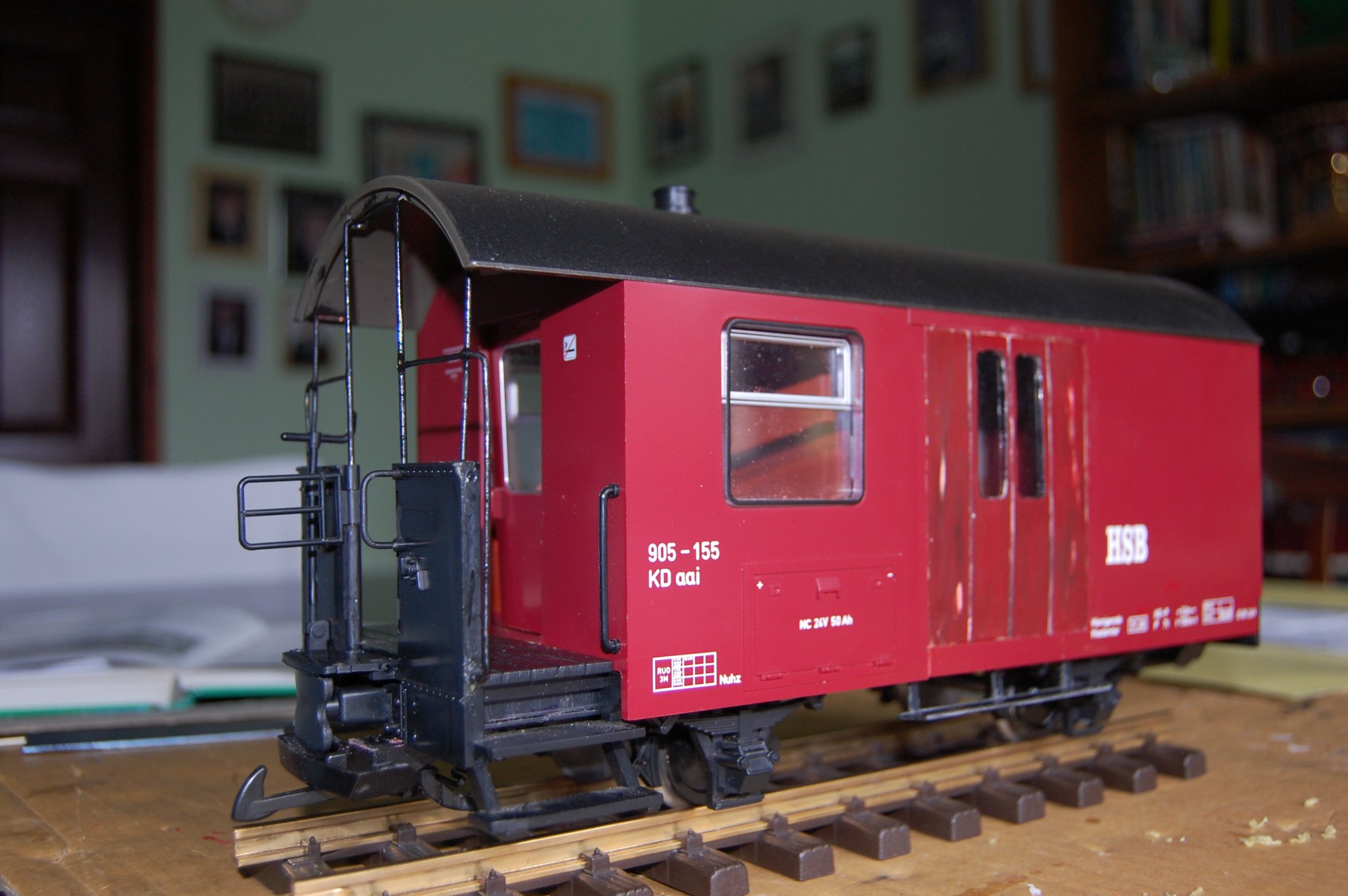 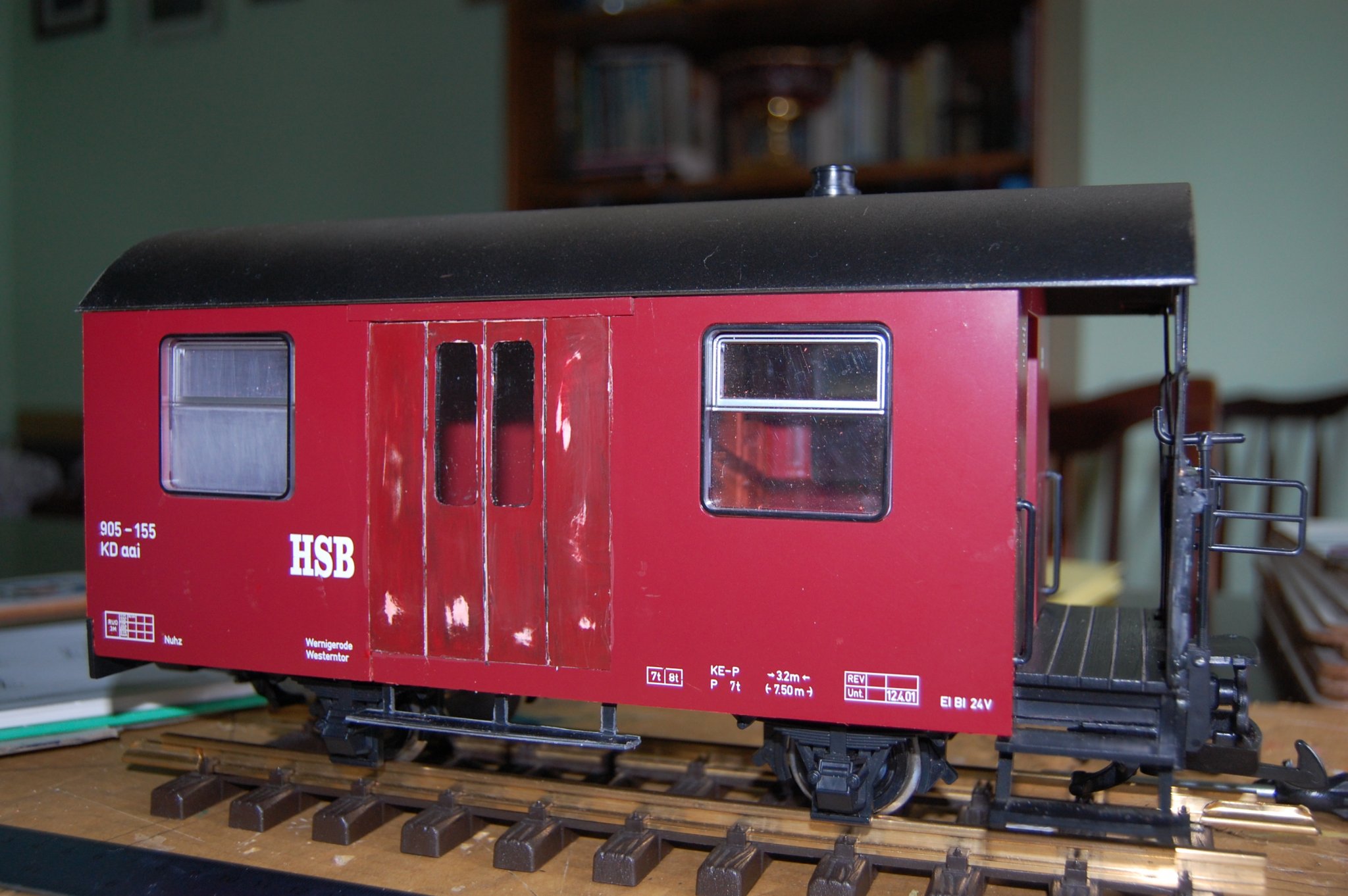 I'm just a man in the middle of a complicated plan.
Reactions: Paul M, simon@mgr, Henri and 4 others

Which original are you basing the rebuild on. There are several of these on the HSB and all seem to be a different.
Expand signature
Alan.

Slight thread drift - I see the Revell Contacta cement tube. Do you find that's satisfactory for use on LGB plastic?
Expand signature
Everyone wants to buy something - they just don't know it yet. Tell me how much you've got and I'll show you what you can afford.

stockers said:
Which original are you basing the rebuild on. There are several of these on the HSB and all seem to be a different.
Click to expand...

Measurements can be a bit tricky depending on what Ruber Ruler Pete has used, it may useful to know that the length over buffers is 7500 mm (312.5 at 1:24). Sadly I tend to use Metric in all of my Calculations (in spite of B) as it is easier (for me) to convert a scale using this and the Drawing Scale which appears to be around 1:87 in the book. Pity that the Bi-folds could not be modified as it would have given a better colour match though Halfords Rattle Can Audi Laser Red or BMW Imola Red 11 will give a good Red or more Maroon Colour depending on choice. There is an interesting picture of 3 of them together in the SnW Book on the next page to the Drawing with the only difference that I can see is that the Middle of the 3 has see through Window at the Non-Veranda end whereas the other 2 have White or White Inside to that Window. As Stockers notes it would not surprise me if changes have been made to the 3 remaining Gepäckwagen during overhauls probably at differing Works during their life. Saluer la différence.

stockers said:
Which original are you basing the rebuild on. There are several of these on the HSB and all seem to be a different.
Click to expand...

As Jon says I was going for the "Dumpy" look, it's better but not quite right to my eye,
905 157 now has it's body removed and is now a cycle carrier

Schweers and Wall Book ‘Die Fahrzeuge Der Harper Schmalspurbahnen’ the plans are 1;87 HO scale and I bought a HO scale ruler for use with the book and made a 1;24 scale rule out of cardboard for use on the models and this ties in with Jons measurements.
Expand signature
Pete

I'm just a man in the middle of a complicated plan.

ebay mike said:
Slight thread drift - I see the Revell Contacta cement tube. Do you find that's satisfactory for use on LGB plastic?
Click to expand...

Yes Mike, it seams to work well, just need to "rough" up the LGB plastic to form a key on the suface I also use Evo stick or Araldite depending on how much stick it will get.
Expand signature
Pete

I'm just a man in the middle of a complicated plan.