Hey guys thanks so much for your help with this.

Phil/Rik, my XLS (in Rugen) is the normal XLS, I didn't think/know about looking at the XLS-M1 for the interface pin outs.
Also I didn't realise the interface board in my 99-5015 loco official terminology is known as "Marklin/LGB Gauge 1 interface" - always helps to know what you're looking at!
So you both set me on the right track there.

John thanks so much for annotating my photo! Awesome.
I'm sure this gives me what I need to proceed.

Getting nowhere with this!
I've soldered my power buffer components together.
Have used my Central Station 2 to turn off analogue (DC), and have incorporated a switch to disable the buffer.

Identified the pins to connect to, thanks to Phil, Rik and John, and electrically the power buffer appears to be working (using multimeter). Nothing has blown up, and the loco continues to operate normally.
Initially tried just a 2200uF cap, (but later added another 3300uF in parallel).

You can see my driver performing his duties bearing the buffer parts on his shoulders! 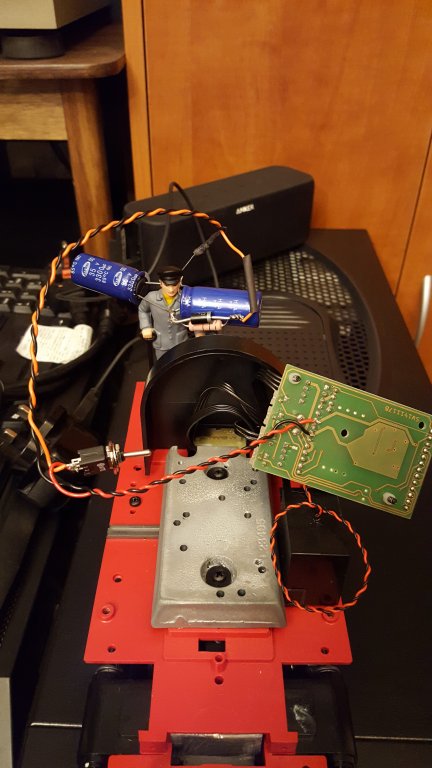 But, it ain't working!!
I wondered if disabling the mfx protocol to force the 55028 decoder to use DCC might help to allow the decoder to work with a power buffer?

But my Central Station 2 (the only method I have of CV programmimg) doesn't provide any means for me to change CV50 (via the mfx screens) to set the protocols to use.
I wanted to try turning off bits 1 (Analog DC off/on) and 3 (mfx off/on), so that it reverts to DCC only.

I also tried re-adding my loco using the DCC search/connect method, but it refuses to idenitfy/connect to the loco. I wondered if I could then utilise the DCC CV programming screens of the CS2 to disable mfx. It's a bit of a catch 22.
I'm not sure that I want to buy a specialised PC module to do CV programming.

While doing some further research I came across this older post here in GSC which effectively suggests MFX decoders do not work with power buffers!!!
Is there a more definitive answer, or yet more hearsay?

MFX and other digital systems

Suppose I manage to enable DCC only operation of the 55028, is there any chance the decoder will then allow the power buffer to work?
Think I was hoping to be a pioneer and provide some useful info for the forum about making a power buffer work with the 70530 / 20752 DR99-5015 loco and the 55028 mfx decoder, shrug. Should I give up?

Phil, you said...
My guess, power-buffers are connected to the decoder, and not to the loco/interface, as they are then under the 'control' of said decoder.

Perhaps I should I be trying to connect the buffer elsewhere?

Or is the only alternative to install a different decoder like the Massoth eMotion XLS-M1?
(And then presumably I'm into a whole load of other issues, like programming the whole CV setup, functions, lights, upload loco sounds, and so on)

If you were to buy a M1 chip, you can get it pre loaded with all the sounds and CVs set for your engine.. Shouldn't cost any more.
Marklin have made the CS2 a proprietary item - deliberately I expect - it works with Marklin and in their humble opinion, why would you ever want anything else.
Expand signature
Alan.

stockers said:
If you were to buy a M1 chip, you can get it pre loaded with all the sounds and CVs set for your engine.. Shouldn't cost any more.
Marklin have made the CS2 a proprietary item - deliberately I expect - it works with Marklin and in their humble opinion, why would you ever want anything else.
Click to expand...

Same with all Massoth decoders (and many others I expect) - the retailer usually sets them up for you. You can still fine tune them if you want.
Expand signature
Alan.

stockers said:
Same with all Massoth decoders (and many others I expect) - the retailer usually sets them up for you. You can still fine tune them if you want.
Click to expand...

Had another look at Massoth site for their decoders and found what you were referring to, a number of available locos, with demo sound examples, CV datasheets, etc. Can't find my loco precisely (perhaps needs a little more searching), but there is a config for the 99-5001 loco, which I believe is practically the same engine.
Or going totally against prototype for a bit of fun I could get sounds for a nice big Shay installed in the 5015

. In my late teens I owned a Mini with a knackered loud exhaust and 2 lorry horns under the bonnet, which phased against each other, and made people wonder what the hell was approaching.
Expand signature
Jim
Corby Glen Light Railway
(Currently in Early Building Stage)
16mm 1:22.5 G-Scale / 45mm gauge
LGB/Marklin DCC CS2, 99-5015, Rugen.
G

Just for anybody like me searching for the Massoth article, it's now been moved to the WIKI as below:-

Only in german, recommends 1000 uf cap, and 150 ohm resistor and diode in parallel on one leg of the cap to limit inrush.

Not much info there