For some time I’ve been planning a rack railway. My original intention was a simple design which ran from a station at the height of the main railway to the upper terminus. Unfortunately, I can’t implement this for logistical reasons, so I need to have a design where the rack railway trains go part way in one direction and then complete the journey in the opposite direction - see below:

As my layout is all Massoth DCC, I planned to operate the rack railway with the Massoth Navi “automatic drive” function, using some Track Contacts, a single channel point decoder and a Feedback module. The logic is:
Simple in theory, but trying to make it work in practice has been frying my poor addled brain as I kept coming up against the following:

1. Train leaves A, heading for B in a forwards direction
2. Having cleared the points, Train passes over Track Contact TC1 which triggers:
3. Train then proceeds to C, passing over Track Contact TC2 which triggers a “proceed forwards” command after a 60 second delay
4. Train then returns to B, passing over TC1 which, quite reasonably, repeats Step 2
5. Train then returns to C as in Step 3 and spends the rest of its days going backwards and forwards between B and C!!!

So after much doodling, cursing, etc. I think I’ve found a solution that will work and I’m looking for some of you experts out there to either say “yes” or “nope, back to the drawing board”.

The solution involves an additional track contact – TC3 – and a supplementary switch attached to the points motor that switches power between TC1 and TC3 depending on which direction the points are set. 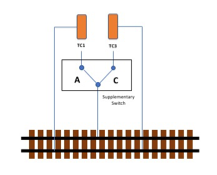 1. Train leaves A heading for B in forwards direction; as points are set for A direction, TC1 is powered and TC3 is “dead”.
2. Train passes over TC1 which triggers the actions above and over TC3 which, being "dead", triggers nothing; also, when setting the points for C, power is cut to TC1 and restored to TC3
3. Train heads in reverse for C, passes over TC2 which does the actions above
4. Train heads back to B in a forwards direction, passing over TC1 which is now “dead” so triggers nothing, and then over TC3 which triggers:
5. Train then proceeds to A

As the action of setting the points to A in step 4 also cuts power to TC3 and restores it to TC1, when the train comes back up the cycle can be repeated.

Apologies for the length of the post – hopefully it’s clear what I’ve come up with. Any comments on whether this solution will work and/or ways it might be optimised would be appreciated.

Thanks in advance.
Expand signature
Phil

What if you 'push-through' a sprung-point, from A to B?
The point is then set for B to C, by default.

You will need a contact near point A. - To detect the train arriving back there, stop, pause, and reverse.

if you use the contacts at A and C to set the point the 'wrong way'.. You can push-through, going up or down, and be set correctly for the second leg.

I did think about a push-through solution, but I've not had too much luck with these in the past (some particularly unhelpful derailments entering/leaving a reversing loop!), especially when the pushing is being done by a coach / wagon rather than the loco. All my points are LGB and TL45 so maybe it's just that these brands aren't ideally suited to push-through operation?

Good point about a contact at A - that's a whole different logistical challenge as I don't think I can modify my layout to allow the rack train to have its own dedicated track in/out of the base station.
Expand signature
Phil

Ralphmp said:
Good point about a contact at A - that's a whole different logistical challenge as I don't think I can modify my layout to allow the rack train to have its own dedicated track in/out of the base station.
Click to expand...

In which case, a magnet on the rack-train, and a reed at A..

Push-through:
Metal wheel-sets, and adjustment of springing on point..
P

PhilP said:
In which case, a magnet on the rack-train, and a reed at A..

Push-through:
Metal wheel-sets, and adjustment of springing on point..
Click to expand...

Yep. Metal wheels for better inertia against the metal points and a slightly lighter spring. The spring is needed so the points snap all the way to the other side.

TC1 could immediately trigger the Point to be set for the AB route and then after an appropriate delay trigger it to switch to the BC route.
TC1 would also be used to trigger the train to stop and reverse if the train was moving forward (from A to B)

TC3 would do a similar thing.... immediately trigger the point to be set to the BC route and after a delay switch to the AB route.
TC3 would also be used to trigger the train to stop and reverse if the train was moving forward (from C to A)
Expand signature
Mark
Running trains powered through the rail with DCC from Massoth on the edge of the New Forest, Hampshire, UK.

For all things Massoth, ESU and LGB go to www.gardenrailoutlet.co.uk
Find GRO on Facebook

Thanks Mark - that's an approach I hadn't considered but seems more elegant than my "supplementary switch" effort. I will do some more research and may be back to bother you if/when I get stuck!
Expand signature
Phil

The track contacts on each approach to the point will require enough delay so that they only change the point when the train is clear, ideally with a safe time margin. Likewise the stop and reverse command at B will require a safe time delay. (The anticipation of a train moving off is quite satisfying).

I'm not sure about Marks idea using switch decoders to change the point and then revert to it's original direction with a single trigger. Perhaps Mark could explain.

My way of operating the line is as follows with the two track sensors for the points labelled 'upper' for C route and 'lower' for A route
For the idea to work you will need 5 track contacts, at A,B and C and 2 for the point approaches.

Phil, you did say that a dedicated track at A for the rack train is not possible. You could add extra track sensors for optional routes into the station as long as you only have the rack loco running on the automatic drive.

Or stop it manually?

Many thanks for this - I'm now at last seeing light at the end of the tunnel, and as usual, sharing ideas on the forum has shown me that my "brilliant scheme" would not have worked anyway!!

Yes, my plan is that only the rack loco will run on auto drive, and although it will potentially share tracks into the terminus at A, I will manage the non-rack trains manually to (hopefully) avoid any issues.

Regarding points switching back to their original setting - the Massoth switch decoder can be set to issue a "return" command to an EPL motor at a user-programmable interval (CVs 75 and 76 is I've read the manual correctly). So for example, passing a track contact could trigger points to switch to A-B route and then after, say, 25 seconds the switch decoder would issue a "return" command and the points would then switch back to the B-C route.

The Massoth switch decoder return direction function is very useful but the timings are buried in the programming of the decoder cv's 75 and 76, not so accessible for adjusting the delays. Using the ' simple' method the delays are set on the Navigator, a little easier.
I wasn't too sure how it worked but digging out the manual, I now understand. Don't forget, RTFM !

Both methods will change the points 6 times for each there and back of the train.

As the rack line is partly automated, is there a danger that the returning train could be missed by a distracted operator and enter the terminus out of control? That is why I suggested a track contact on all the terminus tracks used by the rack train and because the other trains would not have trigger magnets they would not affect the rack loco.

How about this idea?

You could add a pair of sensors on the approach line to the terminus configured for direction triggering. I think that is an option on the feedback module and requires 2 detectors directly after each other.
So as the train approaches the terminus it will get a stop command. It will then stay there until the hand of the operator has cleared the entry into the station and drives the final distance into an available platform (just like the real thing). Departing the station the train will pass over the approach sensors with no consequence due to the direction triggering and continue on it's way there and back without any input from the hand of the operator.

Was there a successful conclusion to this Conundrum?
P

The Shed said:
Was there a successful conclusion to this Conundrum?
Click to expand...

Not sure, I lost track

Yep, none of us are sure of the route taken.

Last autumn my health deteriorated significantly so railways have been irrelevant. If I recover enough to cope with running trains again I will try and update this post.
Expand signature
Phil

Ralphmp said:
Last autumn my health deteriorated significantly so railways have been irrelevant. If I recover enough to cope with running trains again I will try and update this post.
Click to expand...

Ralph, thanks for replying and the update, hope you recover soon, was only just curious to discover whether the options given were able to solve the problem, struck me as a really interesting automatic operating feature using both the Drive and Switch commands.