Not having any interest or running trains for a month or so my birthday gifts included some tokens for the local model emporium,nothing G scale at all in there but the token amount and some cash got me a lot of building materials such as plasticard paints strip and so on and it all sat in the model box for weeks until last weekend when I made a start on a roundtoit job of replacing the old depot at Los Garagos with a new build of some sort.The new depot now situated on the outer loop has put the old one out of use and will be used as something else somewhere else but as yet no clue to what.The new building will be of a retail nature with maybe an office above,construction is my normal style of scribed boarding and single shingles applied one by one to the roof,the single storey roof has a tarpaper effect,so far the walls are done and the basic roof sections with a spray coat of desert sand,a new colour that I have tried and to my mind gives a good timber effect.The next jobs are the window frames and doors,more smoke jacks going on and the board walk on the front to be built although the building will be normally viewed from the back during operating sessions so the added detail of the stairs on the rear will give some interest,the lighting unit(16V) is already in place from the old depot,as for an interior not decided yet but some baffle boarding at least will go in to stop a see through effect

,some pics of the build so far. 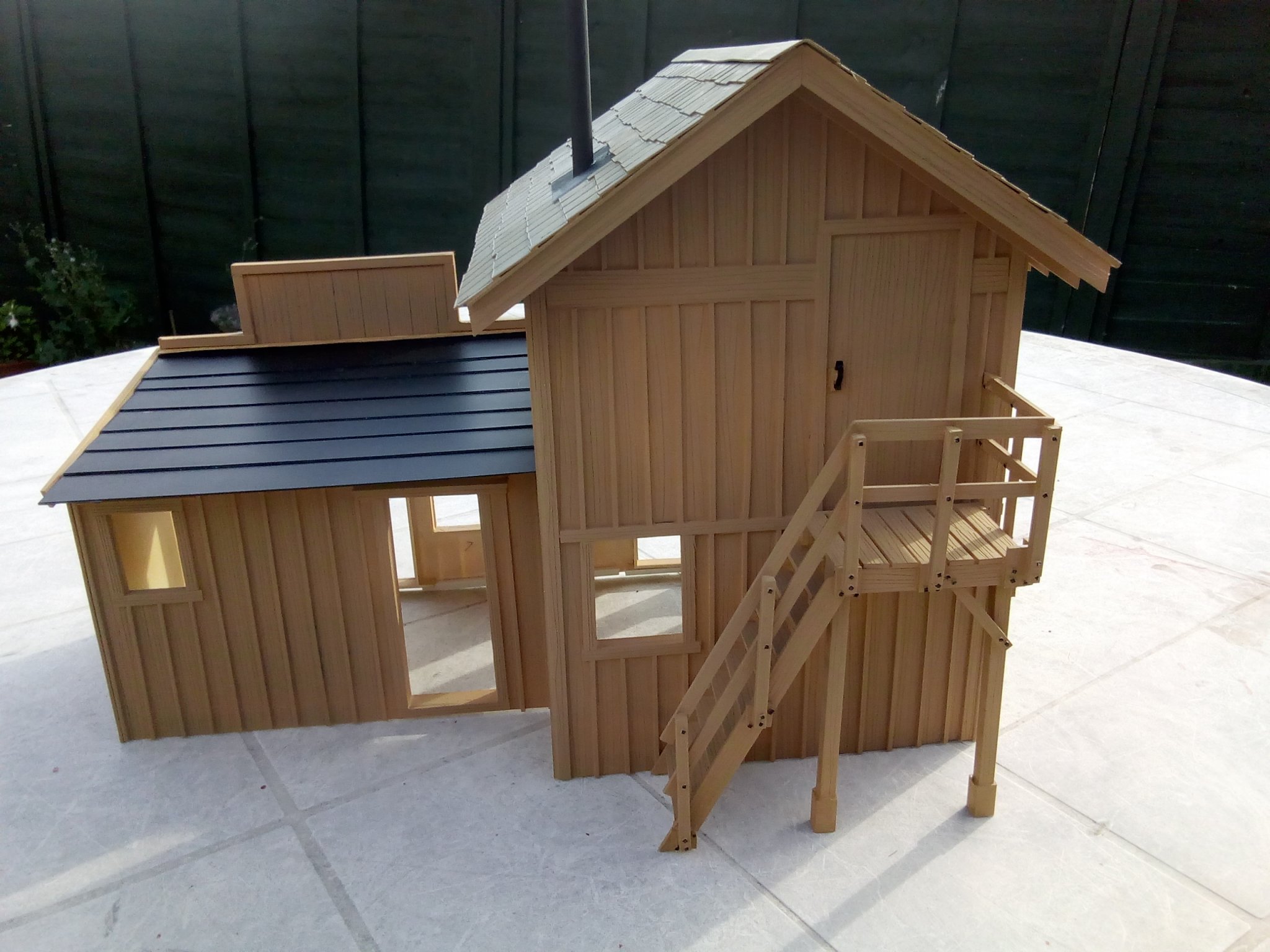 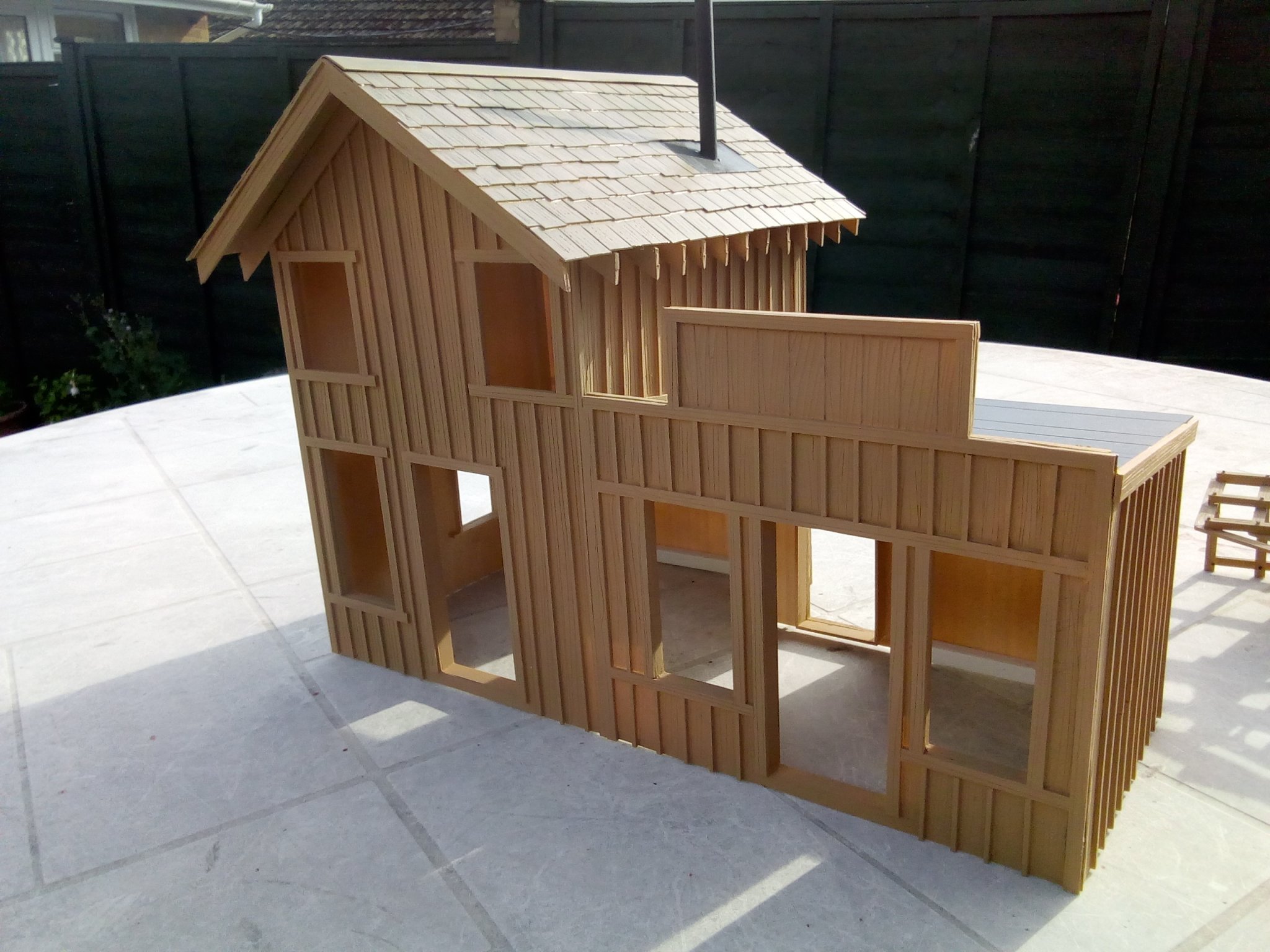 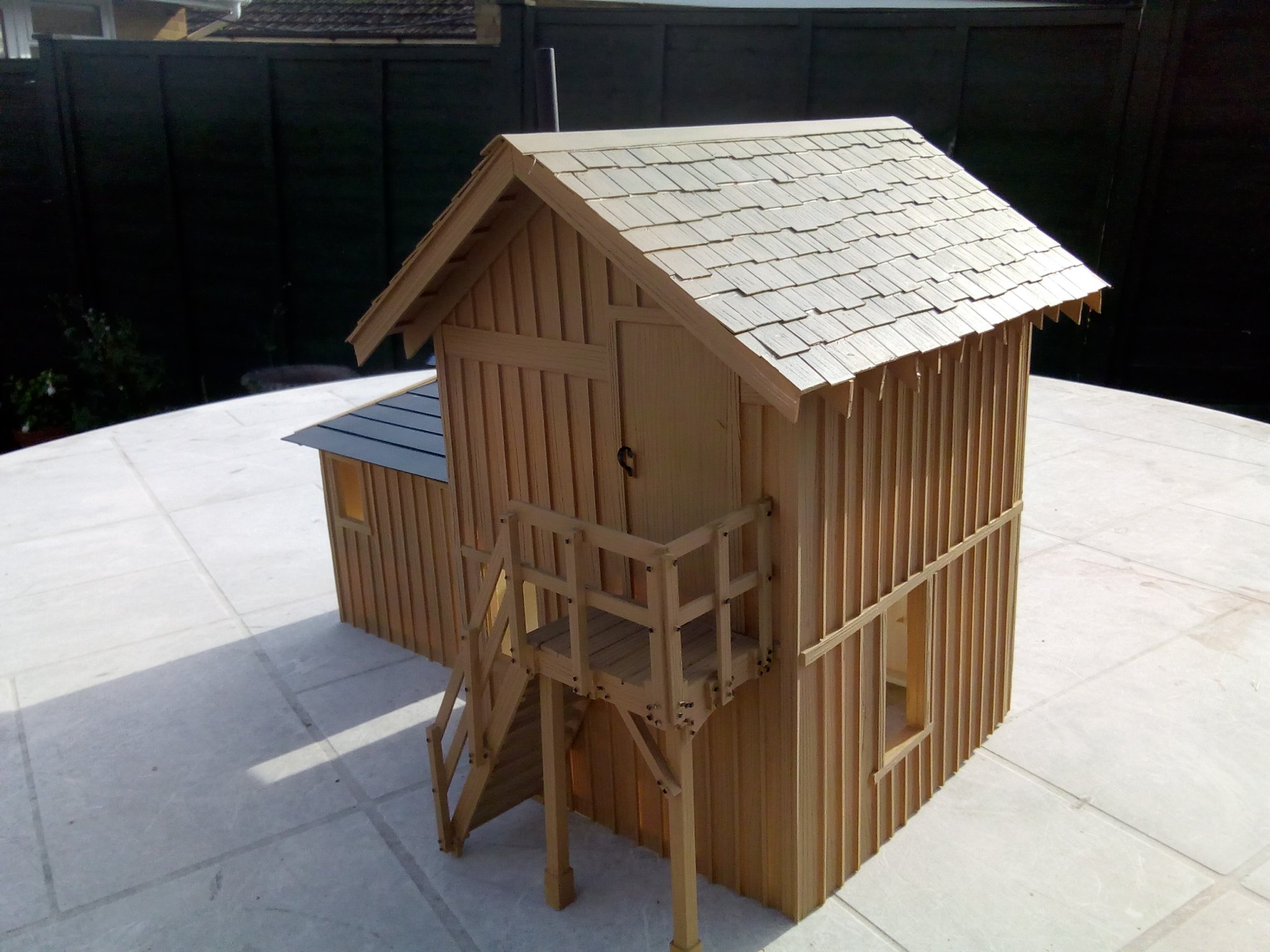 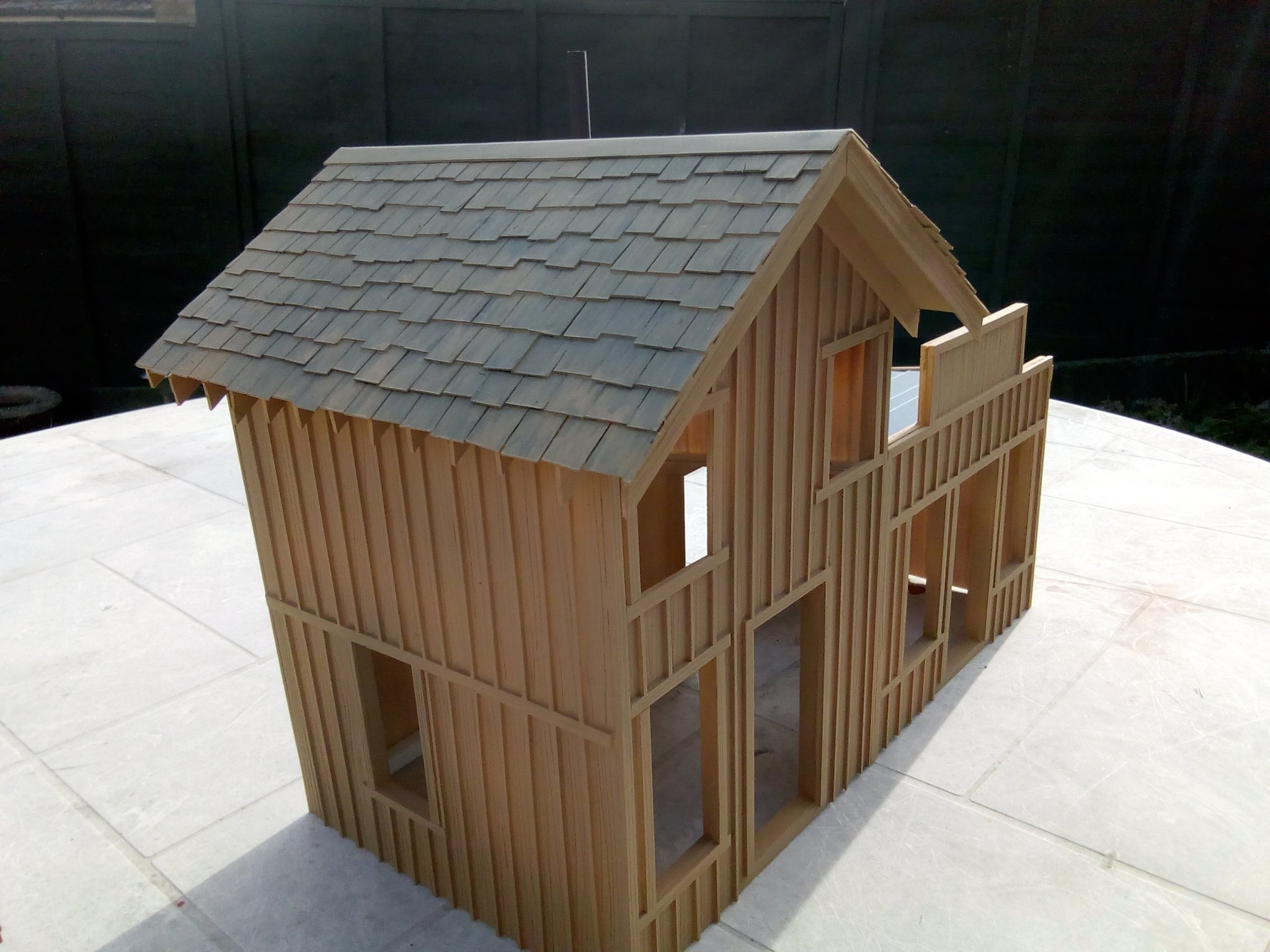 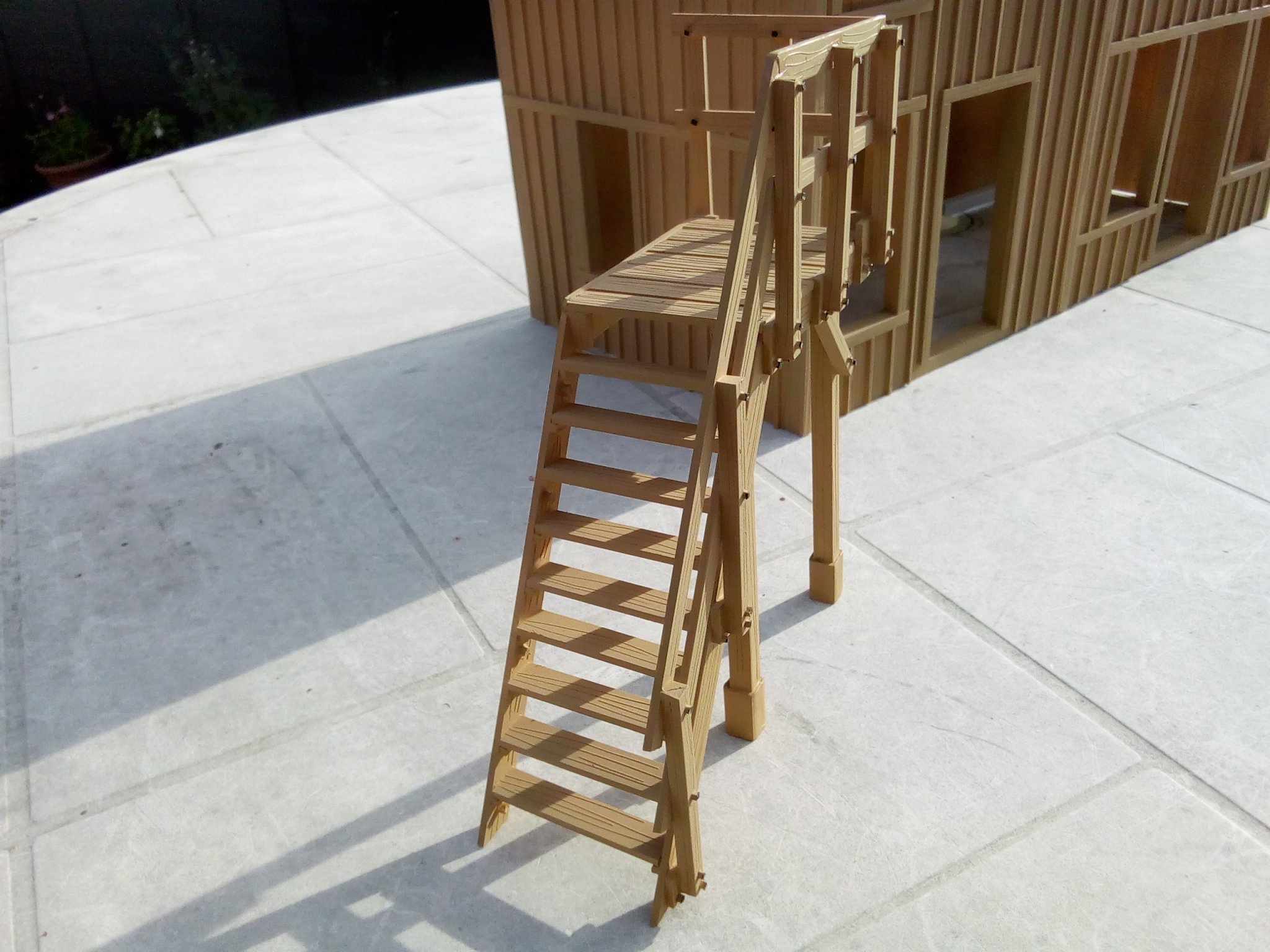 A little more done,the inside of the building has been painted matt black to kill any light bleed through the walls as light just ain`t supposed to pass through wood and still undecided on an interior,the window frames done and glazed but need a little touching up,the apex roof also second coated,the next job will be the doors and just may make the rear door to slide. 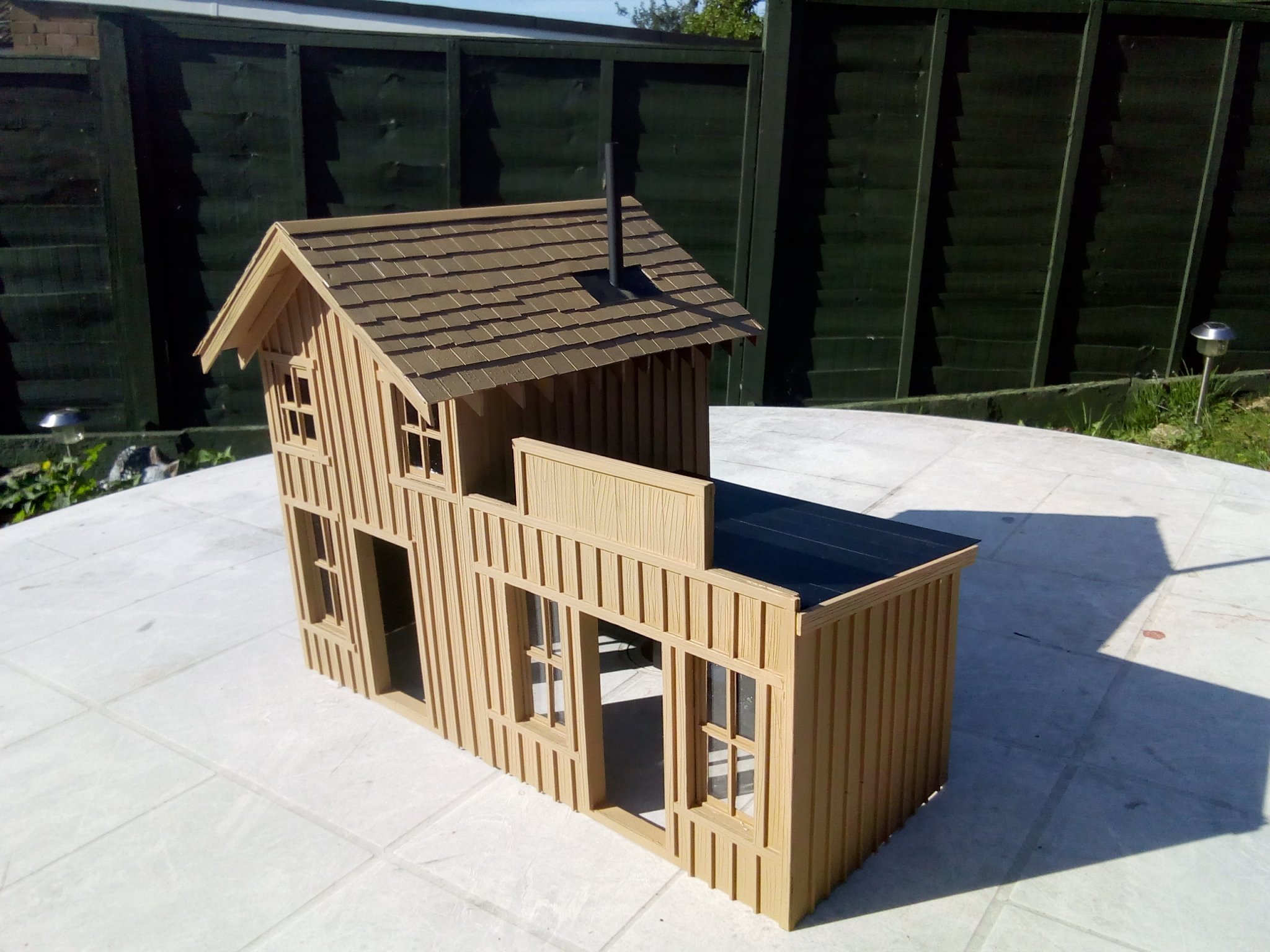 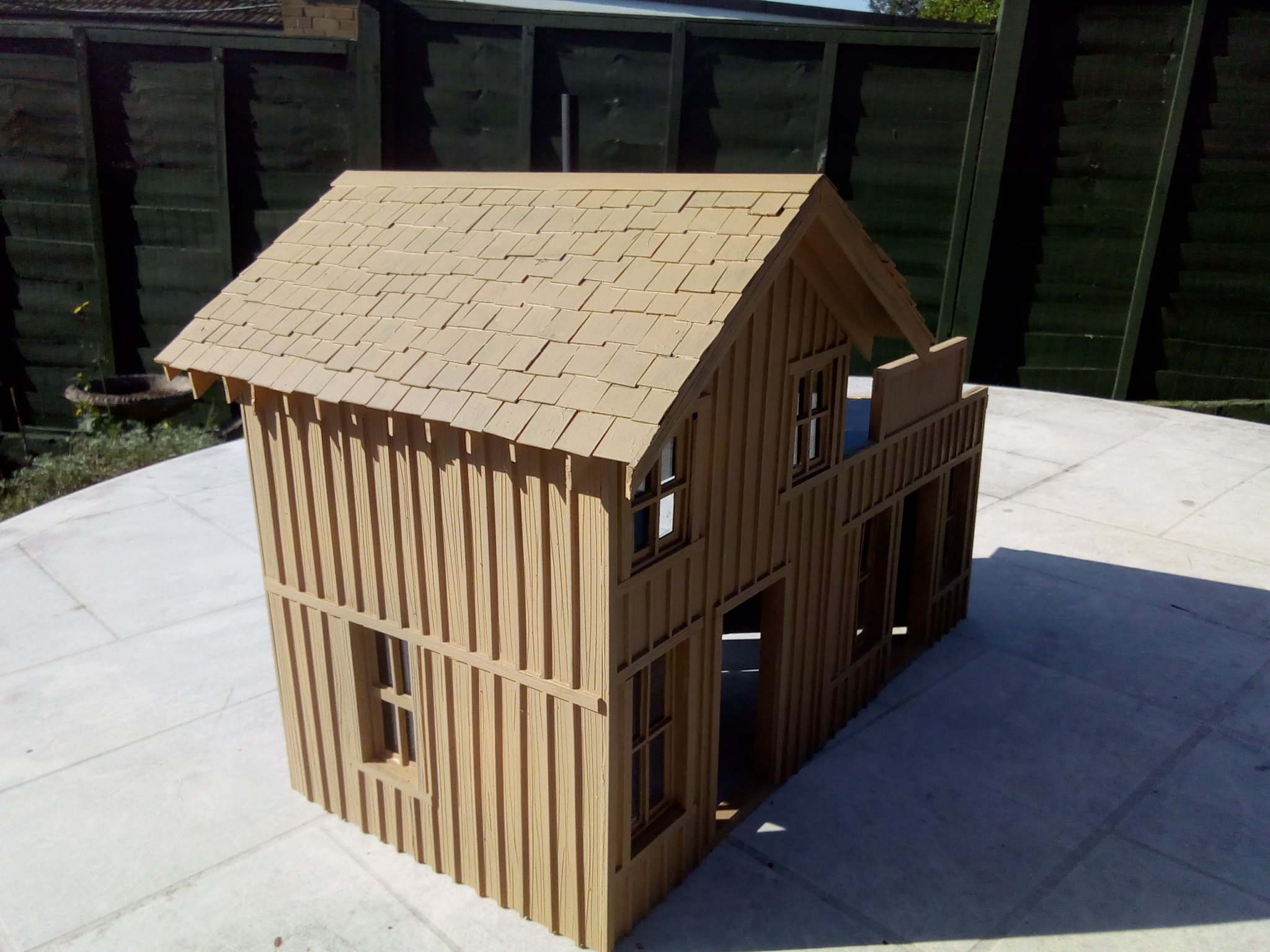 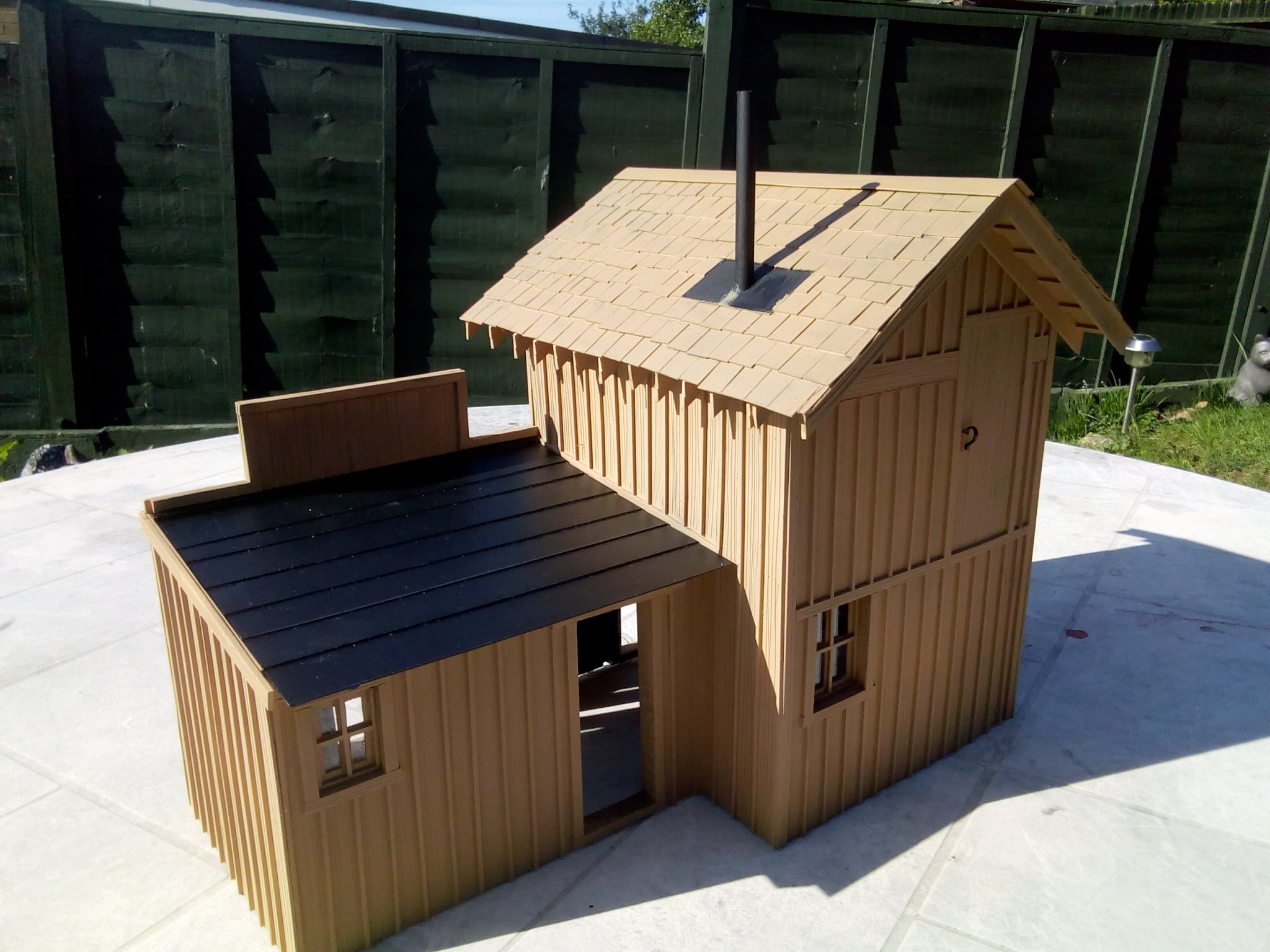 A stunning piece of work.

Thanks all for the positive feedback,quite a lot more done over the weekend,doors in,boardwalk done although the item and the staircase have still to be fitted on as it`s easier to work on the building with them loose,the large stack on the diner is a oo Wills industrial fittings kit and works well,some signage on too.Just a few more bits and bobs to do to finish it off,window blinds,a paint touch up and so on so a few pics on the progress so far.

I don`t think I am doing an interior but undecided as yet. 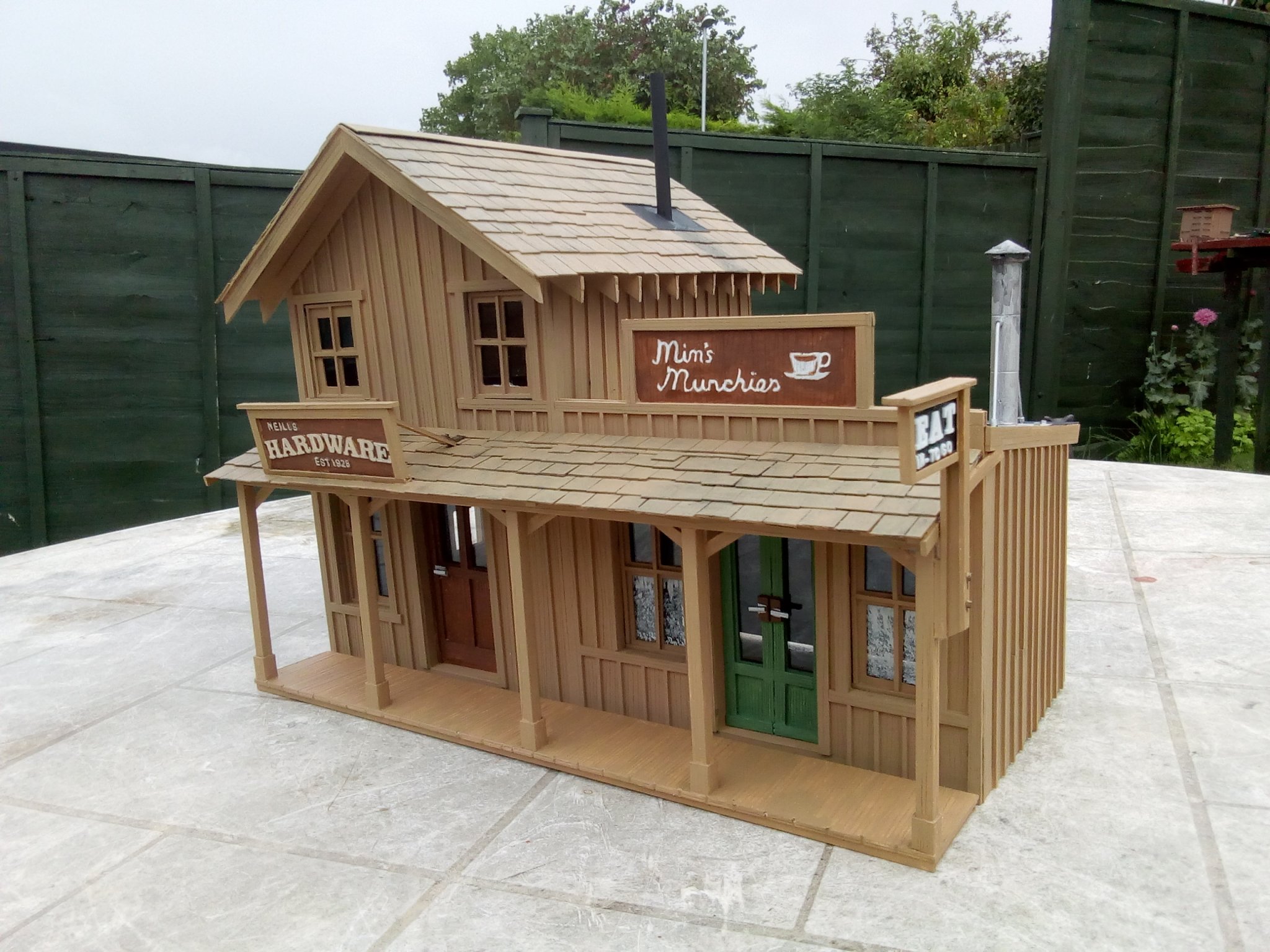 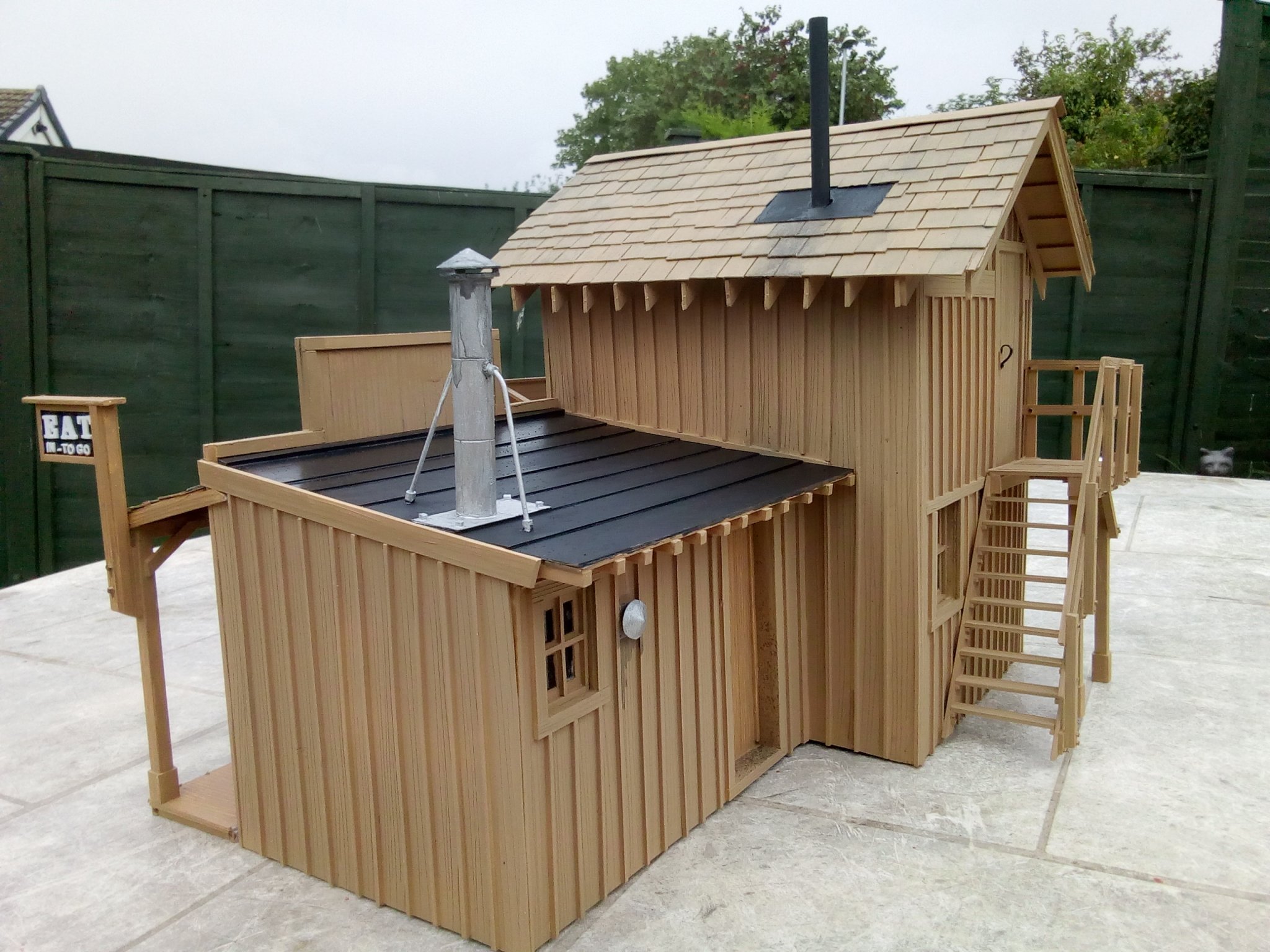 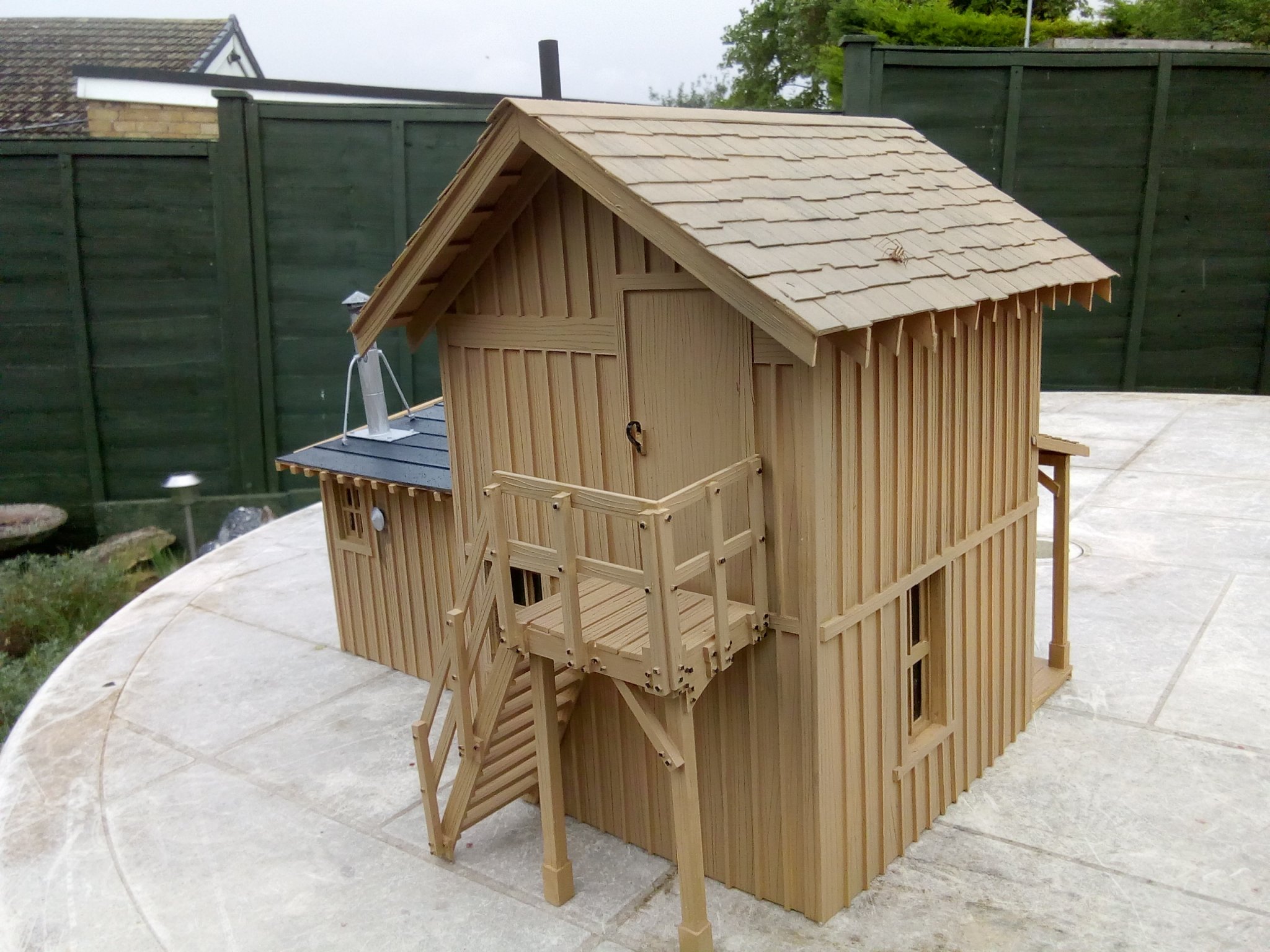 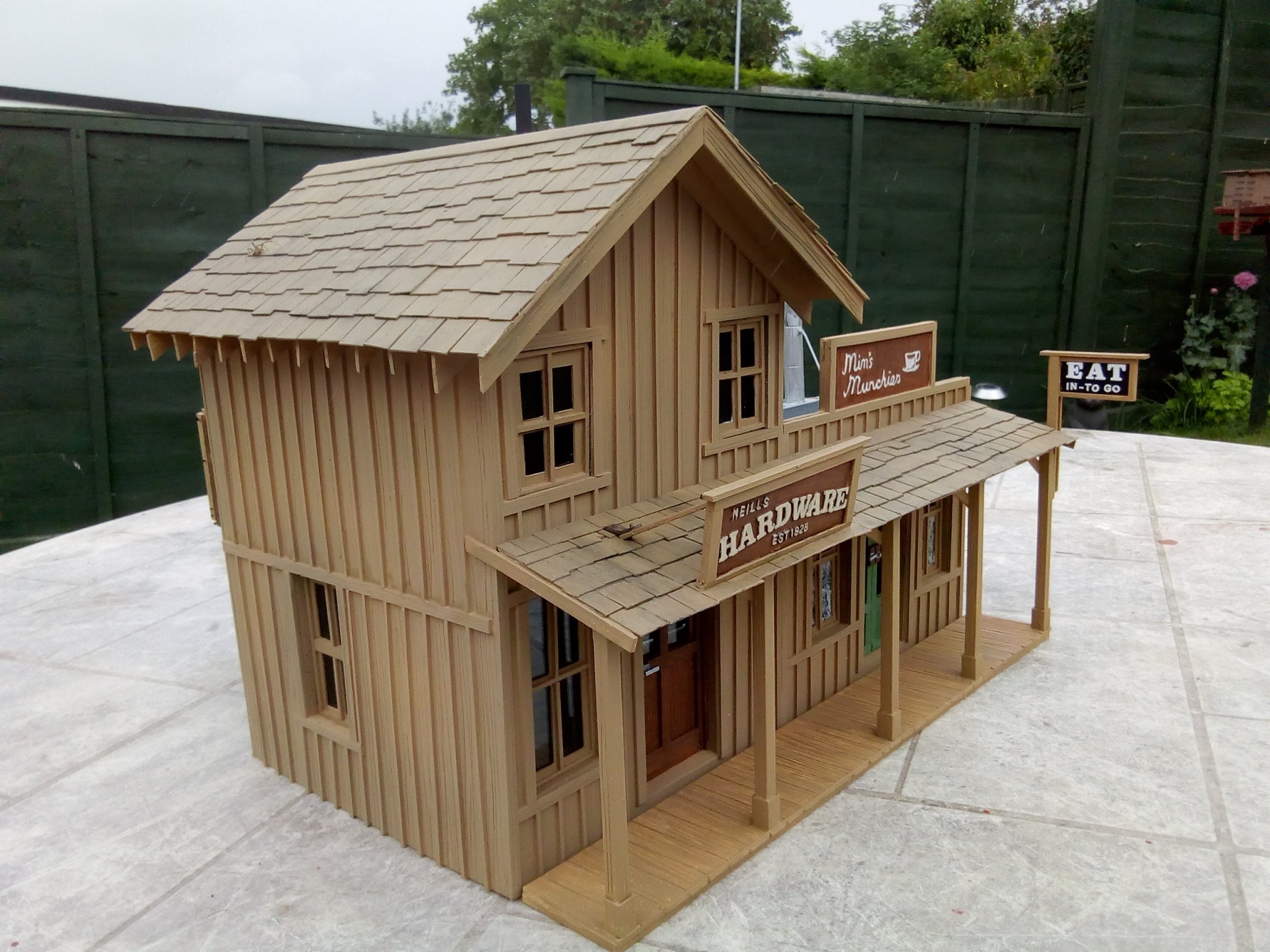 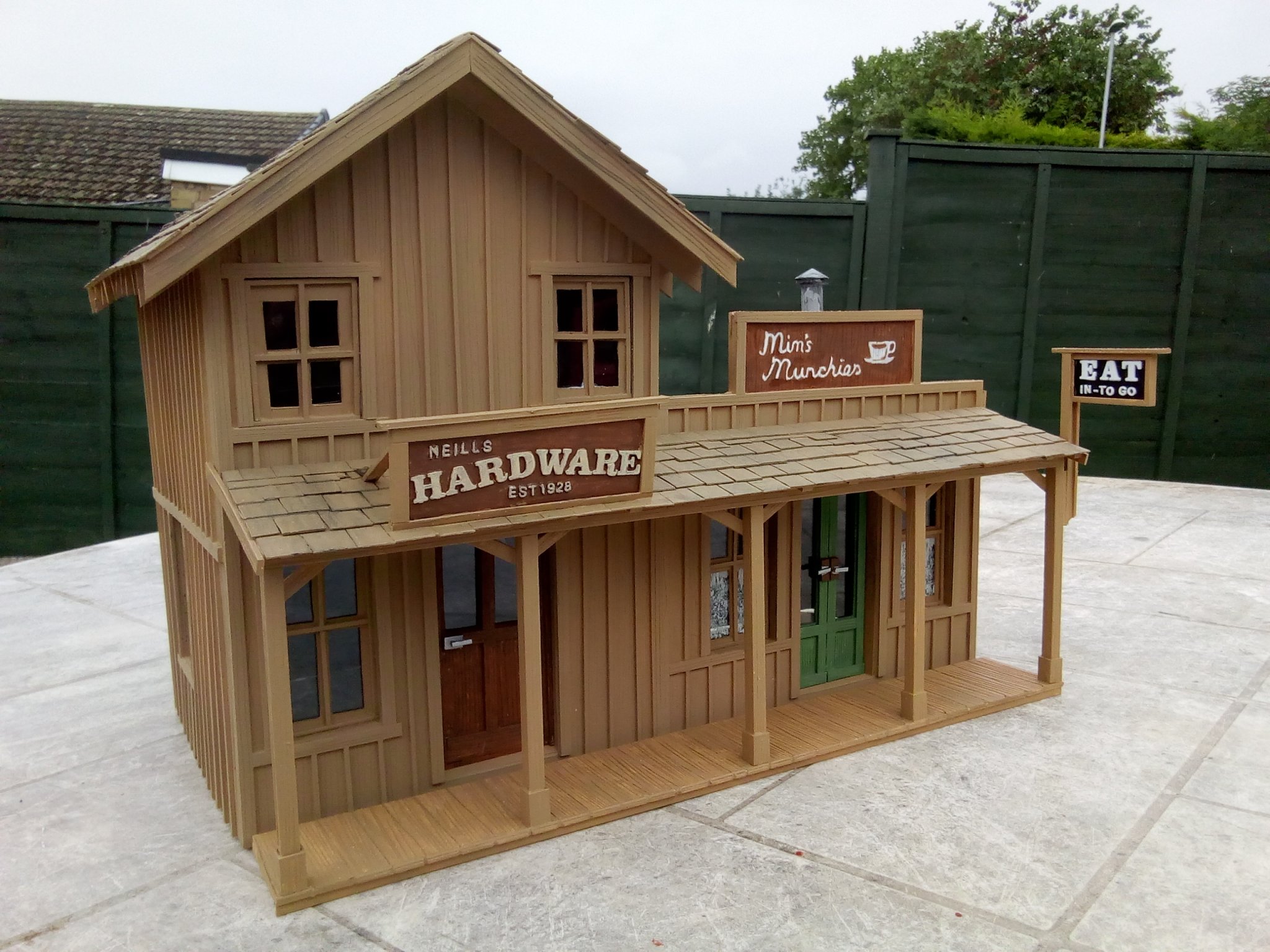 Is that a scale spider on the roof, and if so, its a monster

JimmyB said:
Is that a scale spider on the roof, and if so, its a monster

Has it been painted/weathered? We should be told..

PhilP said:
Has it been painted/weathered? We should be told..

Phil,I assume you mean the little beastie,well I got out my Humbrol no 100 red brown and a very small paintbrush to try and change it to a Mexican Red Knee,,,,,,but the little b*gg*r would`nt stay still!!!!!!

PhilP said:
If you need photo references... I can visit No.1D .. She has (at least) one of those!

Thanks for the offer,trouble is s`gone and the paints put away now

I`m calling this one done now

,still in 3 bits until it goes into final position on the railroad,a few minor changes done this morning to round it off such as some blinds fitted in some windows,the sign for Mim`s place has been colour changed and re writen,some chalk boards under the windows,office sign on the upper door and some shingles on both of the roofs colour washed with a contrasting colour for a little visual interest.the interior light baffles added so the internal lighting will light up both sides of the build but not allowing to see through from front to back through the external windows,I have decided that no interior detail going in this one as only the small windows at the rear will be in view during running sessions,next build?possibly a re build of the towns hotel and still have to re model the gun shop,the list goes on!! 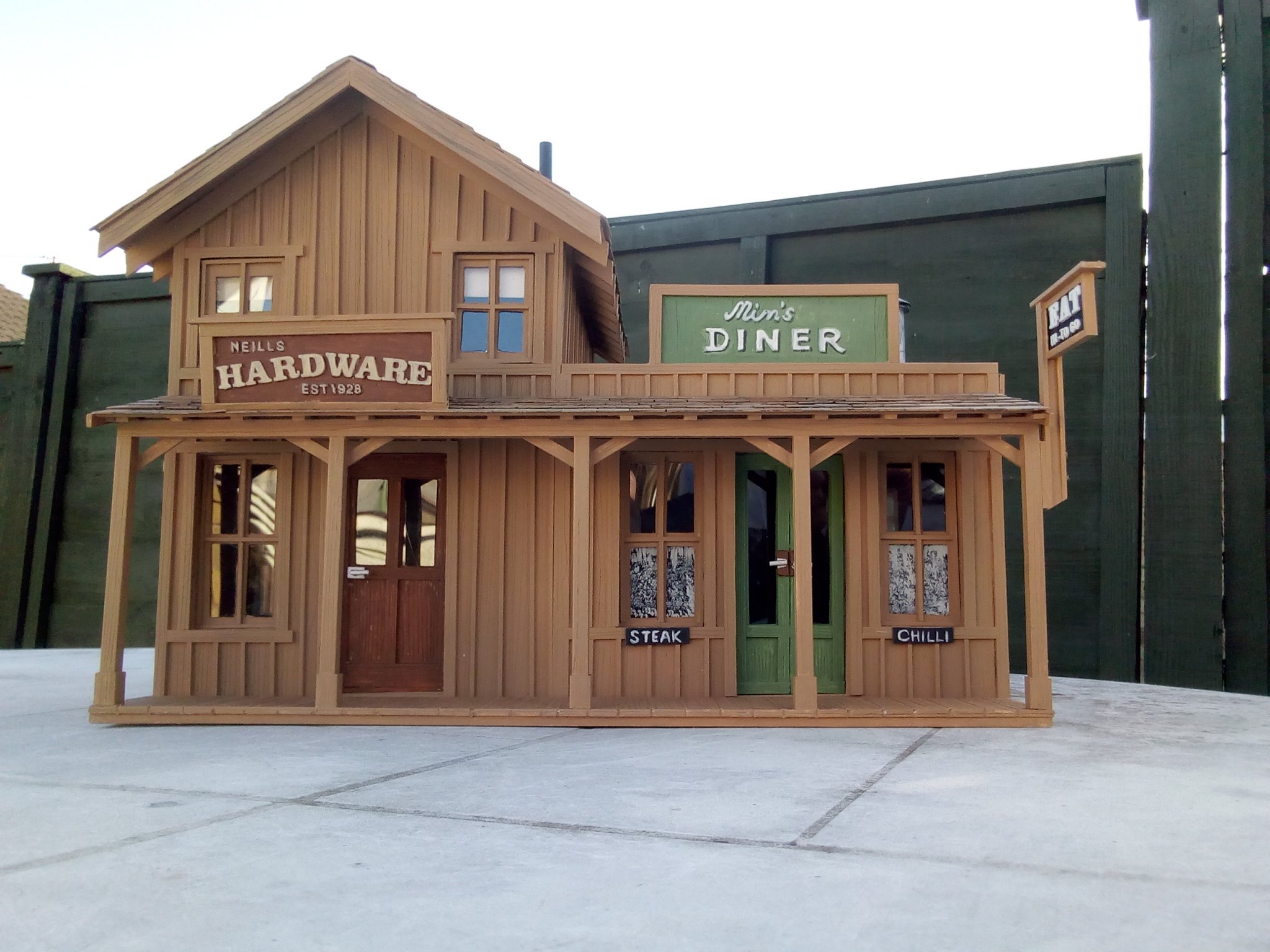 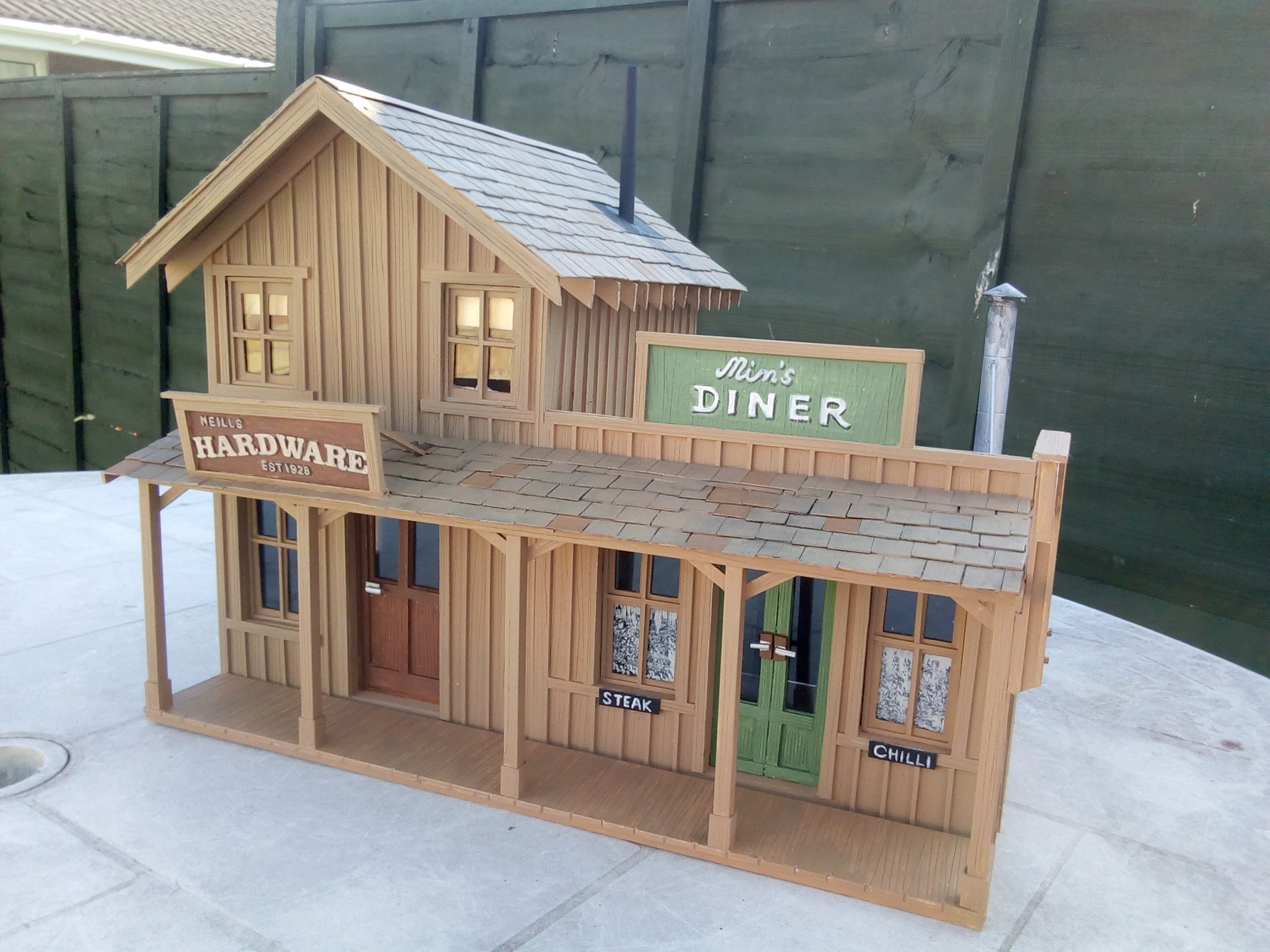 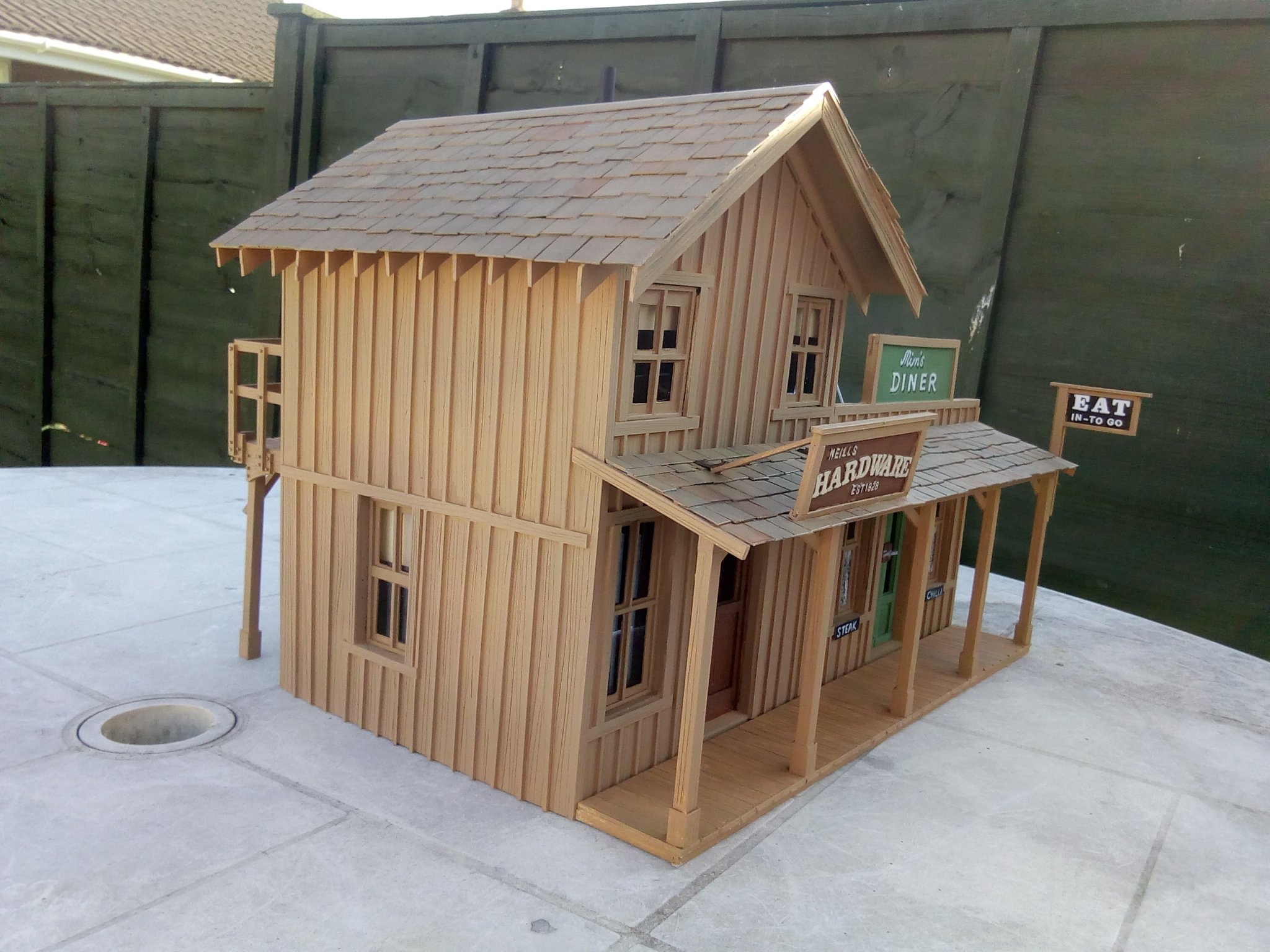 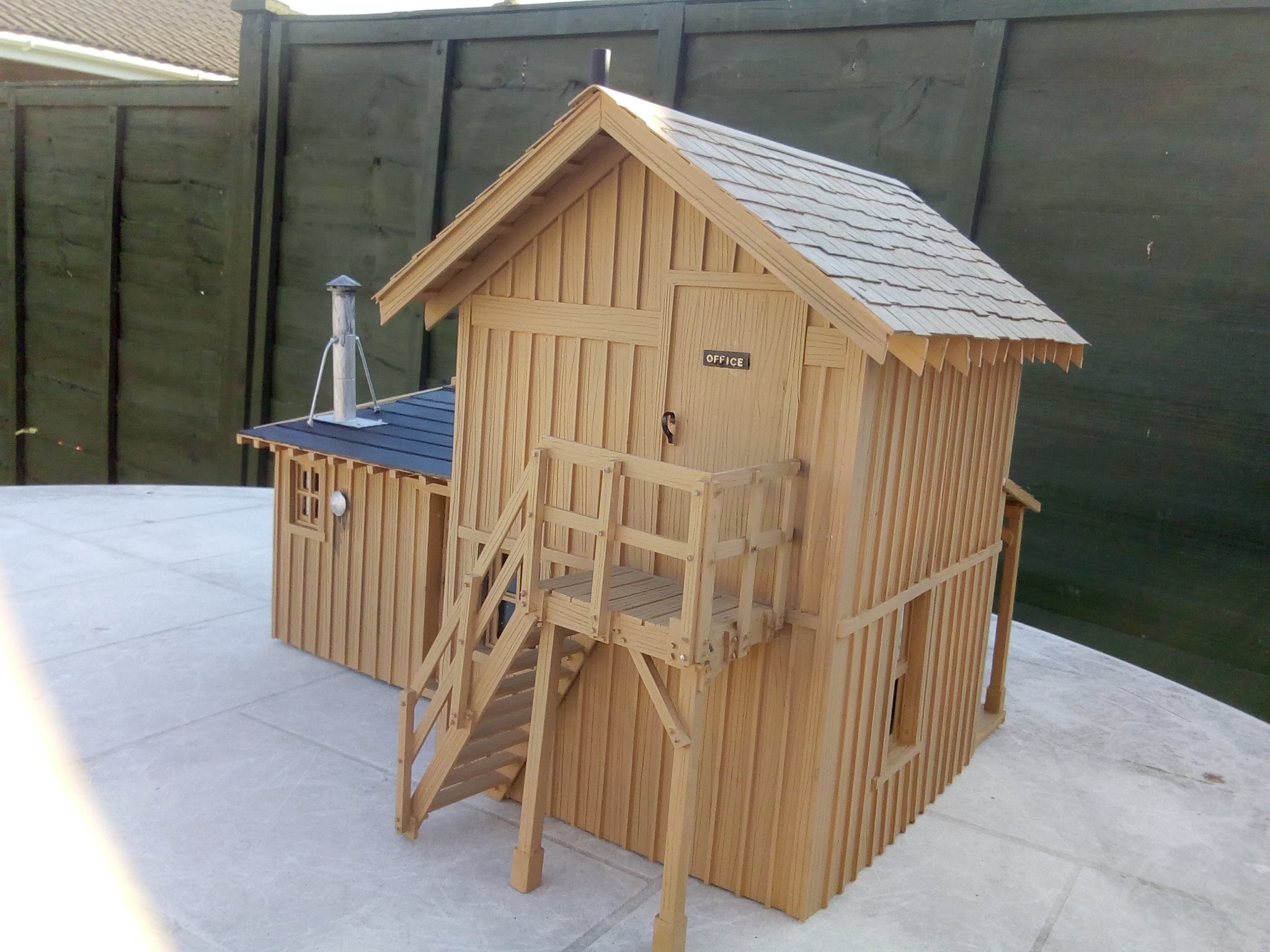 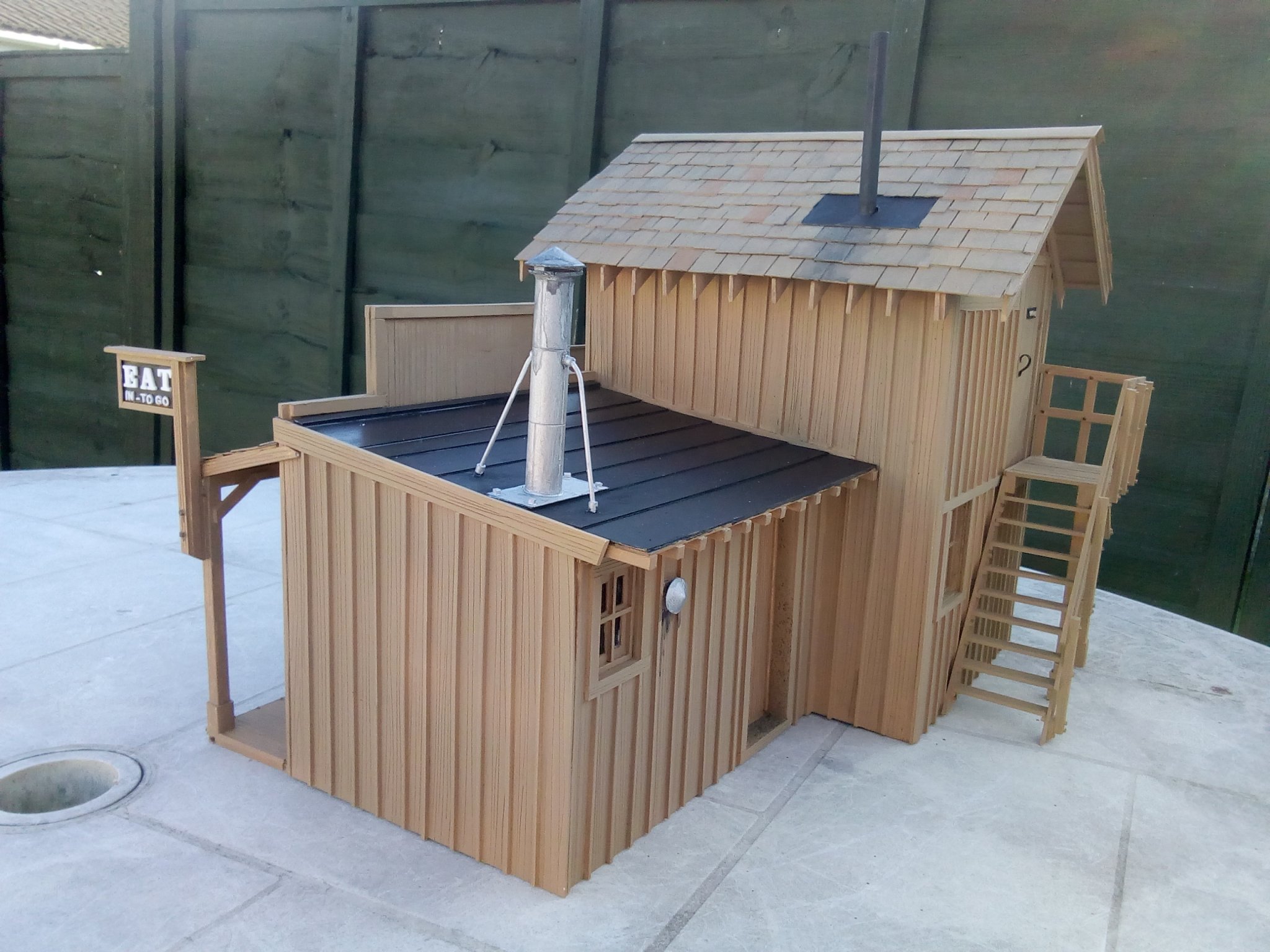 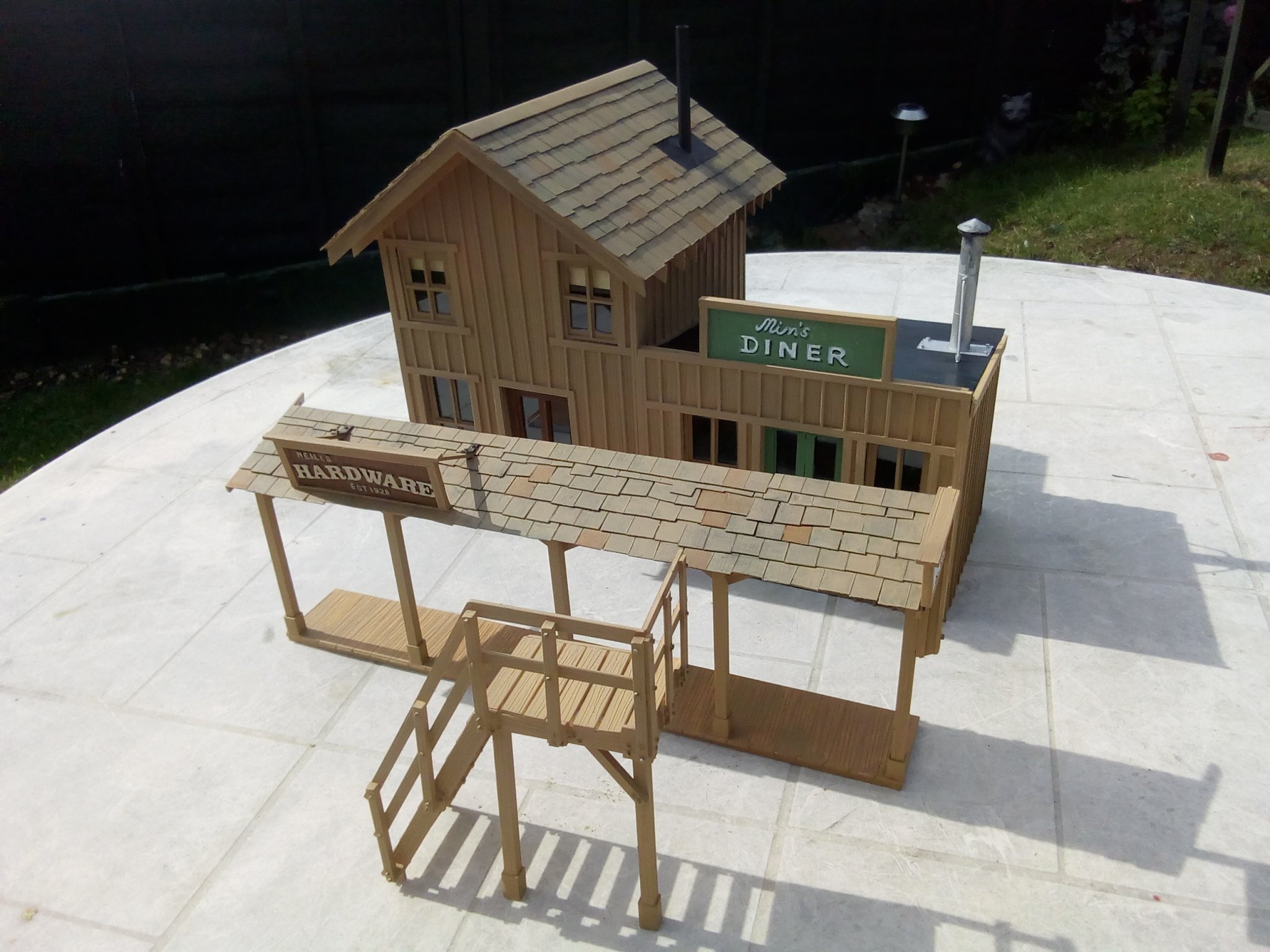 Nice looking building, like it as it is duel purpose, looks great

Keep thinking 'I must have a go'..

Then someone raises the bar again!

Thanks for the positive feedback.Sorry for late reply as just back from hols