No permission to download
Overview History
Well, the Indy conversion is done and it went better than I thought it was going to. I’m nowhere near as neat a worker as Tony; but here goes.

Step one is to disassemble the loco of course; worth noting there is a screw through the smokebox support, under the pony truck pivot.

Removing the track connections in the loco chassis needs a bit of care; the ones to go are the black/red wires connected to brass strips under the outer edges of all three driving axles; these connect to the board in the boiler. The black/red connections to the nickel/silver (?) strips under the central part of the front driving axle are for the chuff sensor (and should not be removed!); they go directly to the two position plug to the tender. (There are a total of six connections between the loco and the tender; a four place plug in addition to the two place. After mod, the top two in the quadruple plug provide power to the tender and bottom two motor control from the tender.) 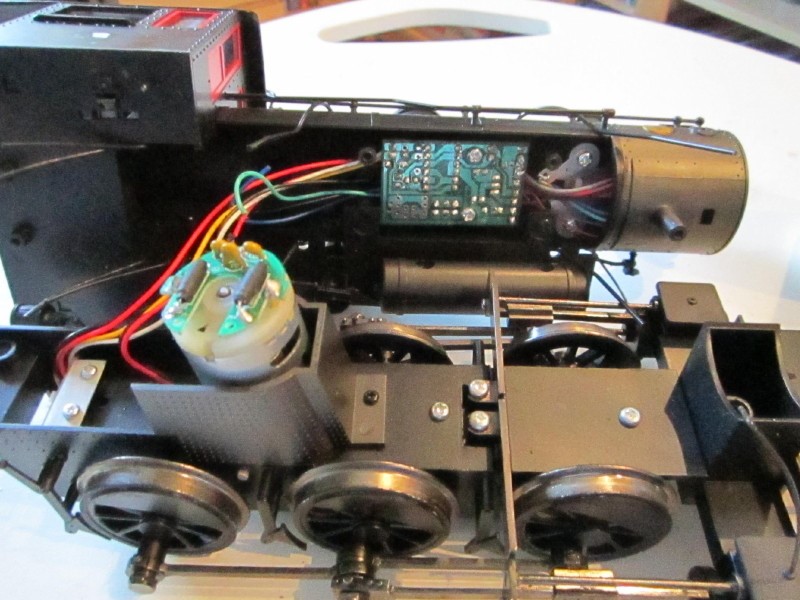 I removed the Bachmann board in the boiler and cut out the mouldings for the screws which hold it with a sidecutter. Then for the smoke unit; a bit of a fiddle to get it around the mouldings that receive the screws which hold the bottom of the boiler on but it does eventually come out. I left the small board on the top of the motor. That could have gone too as the r/c unit replaces its function but I couldn’t see the point. I also removed the two switches behind the smokebox door, they are held by pins and sort of punch out. In my case, I also removed the smokebox door and replaced it with a more Australian pattern (from GRS, thanks Mel). The smokebox front just pulls out after the switches are removed. 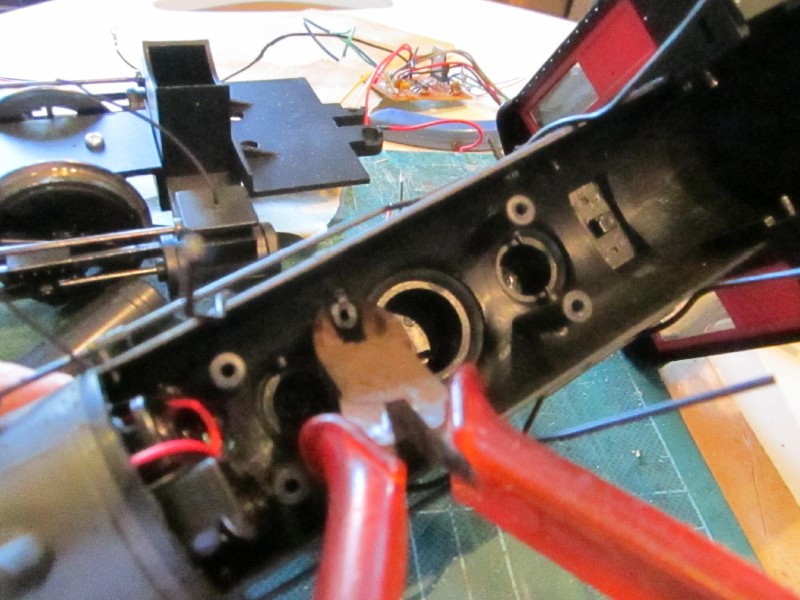 After much fiddling with a number of alternate options (most of which proved impractical because of the small size of the loco body and the tender) and discussion in the Forum the plan became to fill the boiler with as many AAA NiMH batteries as possible and locate the control systems in the tender. This has the added advantage of providing increased weight in the loco body to improve adhesion which as others have noted is pretty pathetic in its original state. I didn’t want the loco going very fast so the fact that I was actually going to provide less voltage (I hoped about 12 volts) than the loco could accept was fine by me.

The limiting factors for batteries in the boiler are the mouldings to receive the screws for the boiler bottom and the near vertical mounting of the motor, which is disguised by the firebox moulding, and which obtrudes into the boiler space. This left me with the ability to fit two, 2 battery holders back to back in the smokebox and two more also back to back in the front two thirds of the boiler space, giving eight batteries and a measured 11.3 volts. While not quite as much as I was hoping I decided after a bit of running on blocks that it would do. I had thought about putting more batteries in the tender (another four AAAs in blocks of two back to back should fit in the otherwise unusable area in the back right hand corner across from the volume control) but decided against it because of what I saw as the unnecessary complexity. However, if top speed was important it certainly should be able to be done. 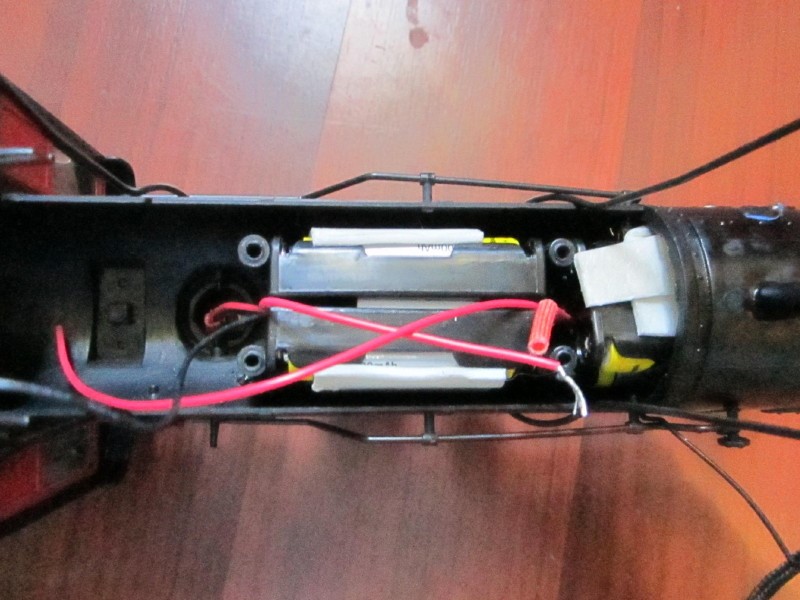 The Cliff Barker r/c unit was fitted with a brass heat sink which was then attached to the underside of the tender top with silicon. Retaining the Bachmann soundpower, board, control system and speaker in what is quite a small tender means that space is at a premium; Cliff’s unit is also quite small fortunately and it turned out OK but care would needed in selecting an ESC/receiver combo of another brand to make sure it would fit. The aerial is curled around the back of the inside of the tender; reception appears to be fine even though the aerial is quite close to the sound board. If you dispensed with the Bachmann sound system (and its mountings) there would be quite a bit more space available; albeit very irregularly shaped because of the speaker. No, I don't have a photo of the tender after I'd installed the RC unit. I did, but I don't now. Please don't ask why. 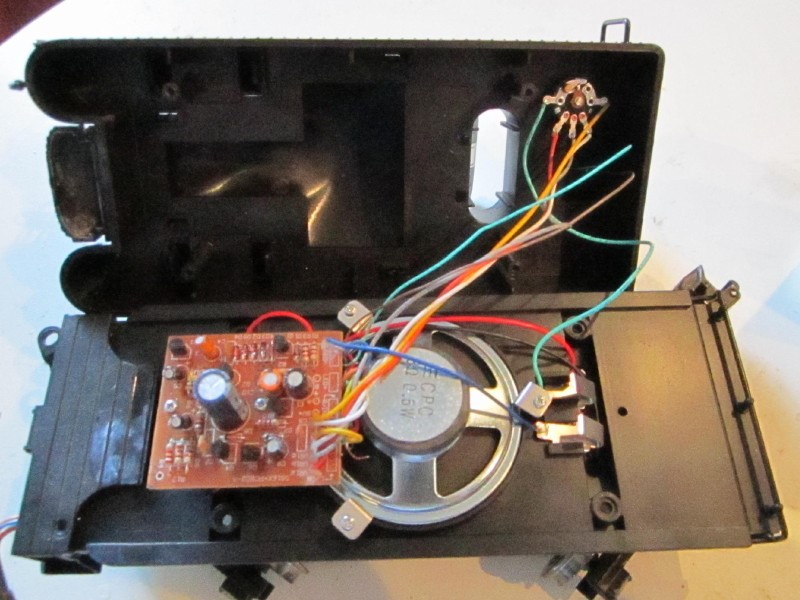 The on/off/charge switch was fitted in the side of the tender adjacent to the shovelling plate and the charge plug in the shovelling plate. The tell tale light for the Cliff’s r/c unit is in the tender back plate, just below the headlight; there’s a recess on the inside of the tender back which almost looks like it was made for it. It presently doesn’t look very prototypical but in time I intend to make up a dummy tail light to disguise it. 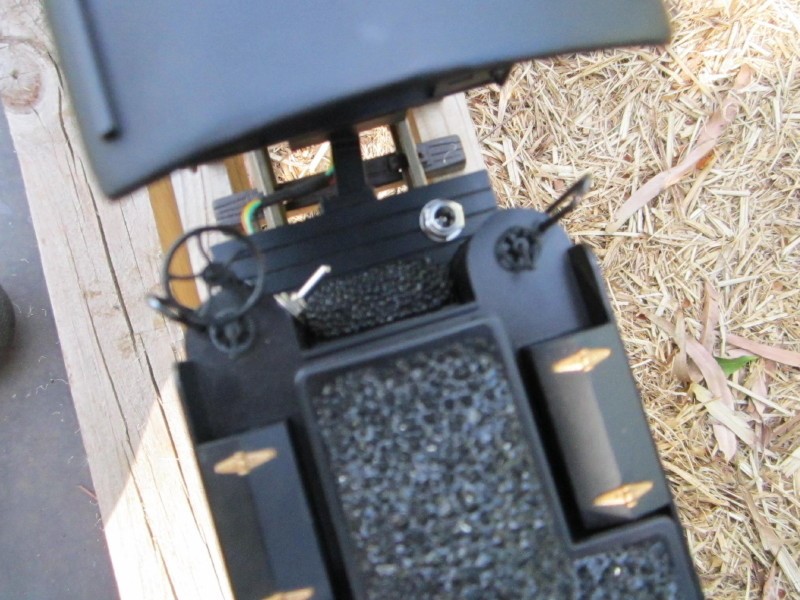 On reassembly it worked first time. That has NEVER happened to me before and now I’m wondering what disaster is about to occur! The highest capacity AAA NiMH batteries I have been able to find are 900 mAH which caused me to worry about endurance. I shouldn’t have. It ran for nearly two hours without completely discharging the batteries (recharge 660mAH), mostly light engine but with a period of hauling 16 axles (3 x Bachmann bogies, an IP engineering sheep van and a Bachmann four wheel brake van). It struggled a bit going up my 60 feet or so of 1 in 30 with that but made it which it wouldn’t have done before modification. With that kind of running time it should do what I want of it. However if it turns out I do need more than these batteries can supply the plan is to provide a connection to a trail car through the tender.

All in all a somewhat challenging but enjoyable project which has certainly improved the little loco. Thanks to all who contributed to the debate when I was trying to work out what the hell to do! 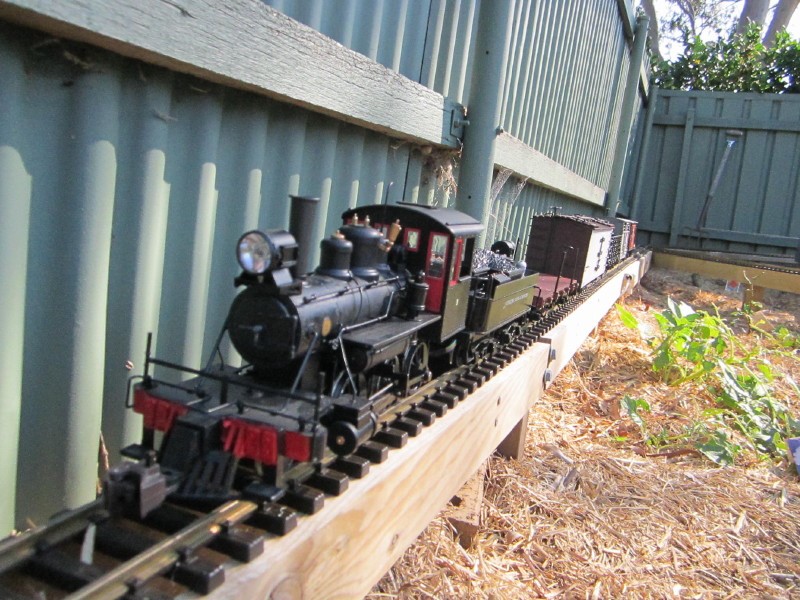