The blue stuff is also sold as polymorph; you put granules in hot (60 degrees C?) water and it coalesces and can be moulded by hand. Being a thermosoftening polymer it can be re-moulded time and again.

Added some paint. I know it's not perfect, but at least it's usable now.
Repaired sides shown here: 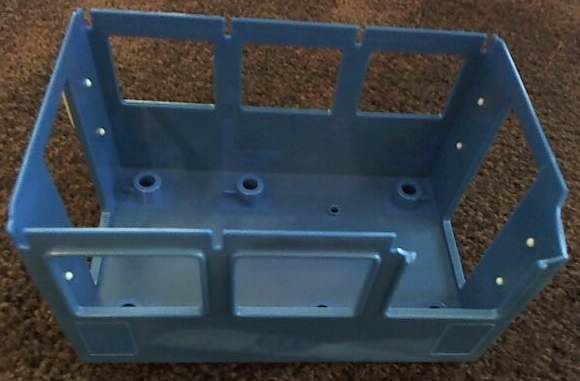 The deformation is partly due to me not using enough thermoplastic for a thick-enough/sturdy-enough mold, but mostly due to removing from the mold too early.

Northsider said:
The blue stuff is also sold as polymorph; you put granules in hot (60 degrees C?) water and it coalesces and can be moulded by hand. Being a thermosoftening polymer it can be re-moulded time and again.
Click to expand...

Hmm, I'm not so sure of that. I think they may have different qualities so not the same.

'Oyumaru' is a moulding putty which comes in sticks. Apparently similar to 'Blue stuff' which also comes in sticks. 'Oyumaru' is quite flexible like stiff silicone which makes is easier to remove items if it is used for a mould. I can only find it in small hobby packs which makes it expensive if a large mould is needed unless buying 10 packs at a time with discount. It softens readily in hot water at about 80 degrees.

I have also tried 'Coolmorph' which is available in small pellets in various size bags The larger sized bags (1 kilo) are quite economical. It softens easily in hot water at 42 degrees, to the point of it being sticky in boiling water but gets quite hard and stiff upon cooling with some flexibility only on thin parts. A thick piece will not flex at all as it is not rubbery. I have not tried 'Polymorph' which is rated to soften at 62 degrees but from what I can gather on YouTube it is harder again and not as soft to work with compared to 'Coolmorph'.

'Polymorph' is also available for use in injection molding machines and it too comes as pellets on eBay which requires 160c degrees to soften. Boiling water won't soften it. When cold, it has a more stiff rubbery aspect to it like 'Oyumaru' but not really useful for the casual hobbyist so best to avoid that one.

So from what I can gather, if you need good flexibility in the mould to release items, 'Oyumaru' and perhaps 'Blue stuff' may be the best to use although more expensive to purchase than some others.
Last edited: 12 Jan 2020

Paradise said:
Hmm, I'm not so sure of that. I think they may have different qualities so not the same.
Click to expand...

You're right -looking at the vid shows the blue stuff is more flexible than polymorph, which is really quite rigid when it cools. It is also waxy, so I would imagine it doesn't take paint well -if at all.

I was experimenting with different epoxy ratios, it turns out that with procreate putty, the lighter grey you make it, the more rigid it is supposed to be.

I got this western coach with a broken roof bit:

Getting the epoxy mixture just right gives the perfect color match with no paint (epoxy molded bit is on the left):

It does need some filing to hollow out where I used too much epoxy: