You are using an out of date browser. It may not display this or other websites correctly.
You should upgrade or use an alternative browser.
Sort by votes
0

PhilP said:
Whilst a catch-point would protect the 'drop'.. Where would the 'caught' loco end-up?

I could see a track-powered loco coming to a stop on the ballast. - Suitable fence to edge of base-board(s).. But a battery / steam loco will just keep going.
You need to physically catch / restrain a still-moving loco?

Which is why I am considering a barrier in the middle of the track or across it to stop the loco leaving it on the tracks with wheels spinning.
Still thinking about this problem.
Toggle signature
The Ringbalin Light Railway Soldiers On
About the Railway
0

How about a plate across the end of the track, spring loaded, that is pushed down (in to a slot?) when the bridge is lowed and returns up as the bridge is raised?
Toggle signature
Pete

I'm just a man in the middle of a complicated plan.
0

Stage 3 of the railway has been started.
The first task was concreting in the posts that will hold the track baseboards for the upper and lower loop tracks the front ones were trimmed to the correct height but the rear ones were left at a longer length so that the risers for the loop that will go back up can be mounted.
This area is where the planned "town/industrial will be situated with a few sidings to provide some shunting interest included.
It was envisaged that a Helix/Spiral track to take the loop that "came down" in stage 1 back up to the upper level would be needed but it is not required because when measurements were taken of the whole track length v the rise and calculations made, the grade is between 3 and 3.5% which will not be a problem for the locos.
I will finish the lower loop first so I can run a train continuously, while I build the other loop, sidings will be added later.

Some pictures of the progress so far, the blog will be updated in due course.

Didn't realise you were a mortgage broker
0

The framework for Stage 3 has been built.
The white string shows the path the second loop will follow to get back up to where it started all those months ago.

Across the front of the shed

Looking from end of Stage 2 toward shed

Blog has been updated with more pictures and a description 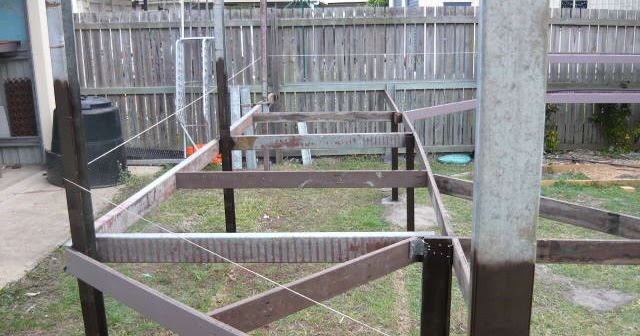 The framework for Stage 3 build has been started . The front posts were trimmed down to the lower level height but the rear ones were lef...

ringbalin-light-railway.blogspot.com
Toggle signature
The Ringbalin Light Railway Soldiers On
About the Railway
0

Paul M said:
Didn't realise you were a mortgage broker
Click to expand...

Why was the girls favourite professional a banker?
Because he said 'if you pull it out you will lose interest' Boom Boom !!!!!

I notice some metal posts. Is that to give the termites some variety in their diet?

Chris Vernell said:
I notice some metal posts. Is that to give the termites some variety in their diet?

The metal is what is known as "C" purlins used to make roof trusses. Yes this is a big termite area but they were from my previous layout so I recycled them.
Coincidentally they are slightly over 45 mm wide so made very strong road bed. I laid them on top of bricks sitting on the ground.

Couple of pictures of previous layout showing the purlins in place.

GAP said:
Why was the girls favourite professional a banker?
Because he said 'if you pull it out you will lose interest' Boom Boom !!!!!

Chris Vernell said:
I notice some metal posts. Is that to give the termites some variety in their diet?

I read these to posts together, and I thought I'm not sure what's funnier, the actual joke or the joke with Chris's comments after. Perhaps it's just me
0

Paul M said:
the joke with Chris's comments after
Click to expand...

The baseboards for the Lower Loop running through Stage 3 have been installed, this now allows me to lay track to complete the Lower Loop so I can run a train continuously.
Once they are painted track laying can commence.

More information on my blog.

The Ringbalin Light Railway G Division is a Large Scale/G/Garden model train layout (trains running on 45mm track) located in Bundaberg QLD Australia. It consists of two layouts; the "Mainline" and the "Cane Line" that operate independently of each other but do connect via an interchange line.

ringbalin-light-railway.blogspot.com
Toggle signature
The Ringbalin Light Railway Soldiers On
About the Railway
0

The lower loop track has been installed and the loop is now continuous.

A set of points were put in the middle as an entry to a peninsular that a proposed sugar mill will be built on.

A cross over was installed before Stage 3 to allow trains to cross between the loops when both are finished.

I have gone back, but have not found what the sheet-material you are using is? - It looks like plywood?? What is your climate like there?
Thanks,
PhilP.
0

PhilP said:
I have gone back, but have not found what the sheet-material you are using is? - It looks like plywood?? What is your climate like there?
Thanks,
PhilP.
Click to expand...

Subtropical, as opposed to our Subarctic
0

PhilP said:
I have gone back, but have not found what the sheet-material you are using is? - It looks like plywood?? What is your climate like there?
Thanks,
PhilP.
Click to expand...

Sorry for the late reply the sheet material is a fibre cement shower lining material ( aka Villaboard in Aust).

The climate is sub-Tropical a cold mid winters day is around 7-9C overnight and around high teens during the day, summer daytime temps up in the 30C+ range with overnight in the mid 20C.
Toggle signature
The Ringbalin Light Railway Soldiers On
About the Railway
0

It's been a while as I had to wait till my shoulder recovered from an overuse injury (SWMBO keeps banging on about old age) but I have now started taking the upper level, line that came down via the "High" trestle back up "Uphill" to where it started.

To save timber I cut a steel C purlin so it formed a ramp of sorts that carries the track up to a point where it curves and rises up to a bridge which after it crosses will again curve and rise till it gets back to the Upper Level.

I had to join 2 pieces of track part way through the curve and to stop a kink at the joint I soldered the joiners in place to give added strength (I have used this method in HO and it worked well).

I have some artificial turf offcuts and I have placed a piece against the "ramp" to hide it, I will contemplate using more if I can work it into the scenery.

At the moment all components have been "roughed in".

Pictures explain it better than I can, and as usual the blog will be updated in due course.

All that has to be done before I run a train is to put fibre cement baseboards under the track so that I can add scenery and catch any train that derails.
For the vertical scenery I am experimenting with using coloured acrylic house render over a shade cloth mesh base.

Blog has been updated

The Ringbalin Light Railway consists of two layouts the "Mainline" and the "Cane Line" that operate independently of each other but do conne...

I have also commenced adding a passing siding so I can run trains both ways I plan on making the siding a station/freight area.
There is also a spur that will run off the lower level and behind the scenery so that I can load trains it is planned to eventually run it into the shed and under the HO layout for storage tracks.

To hide the fence I am looking at some artificial ivy that comes in 3Metre rolls that I can nail onto it. I was going to try a Rembrandt style landscape but the skill is just not there.
Toggle signature
The Ringbalin Light Railway Soldiers On
About the Railway
0

Another option I have seen recently is to use square mesh as a climber for plants. Nit sure how that may work in your neck of the woods but I am certainly thinking about it for a couple of fence panels worth in my garden.
Toggle signature
JonD Dunnyrail East German Harz NG circa 1981 in Cambs. Link to my Railway Build A new Railway is Started - G Scale Central Dated vid of trip on my line mihi necesse est optimus
0

Were I am most available climbers have a tendency of turning into Triffids and take over everything, thus making a trimming job that is almost never ending for nearly 9 months of the year.
Toggle signature
The Ringbalin Light Railway Soldiers On
About the Railway
Show hidden low quality content
You must log in or register to reply here.
Share:
Facebook Twitter Reddit Pinterest Tumblr WhatsApp Email Share Link
Top Bottom