After attempting to model the Southern Region in 4mm for a few years, the wife appeared with 3 kids. A 4mm layout in a 3 bed semi was never really going to be feasible, so I jokingly suggested going outdoors in G. And to my (and my mum and dad's) surprise, planning consent was obtained! 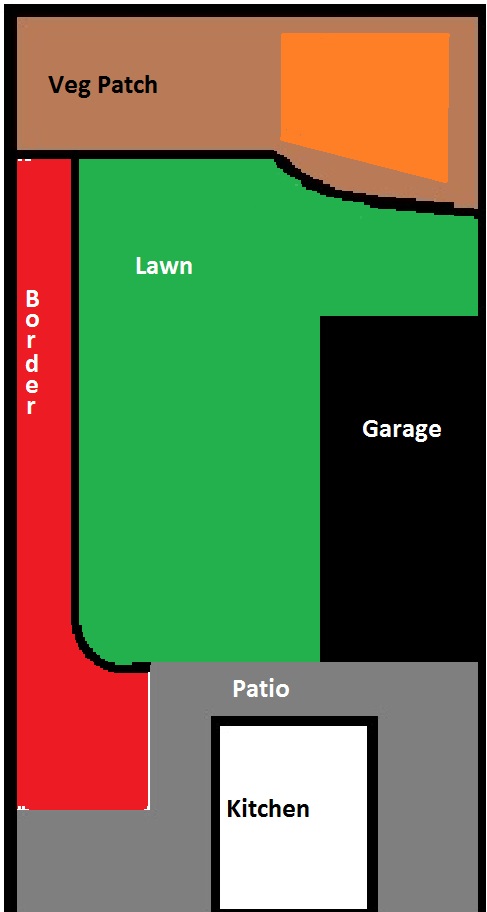 The garden is about 17m long by 8m wide. The veg patch at the rear is elevated by 1ft. The orange area is a "forest" of raspberry canes.

The rough plan was for some sort of station somewhere in the border with a return loop to the south around the edge of the patio near the kitchen. Heading up the garden the line climbs, does a circle of the veg patch then descends back to the "station" area.

We've got a fair few rhubarb plants and a lot of raspberry canes, so I intend to have some rhubarb wagons (bolster wagons) and some raspberry trucks (gondolas) to run for "play value". 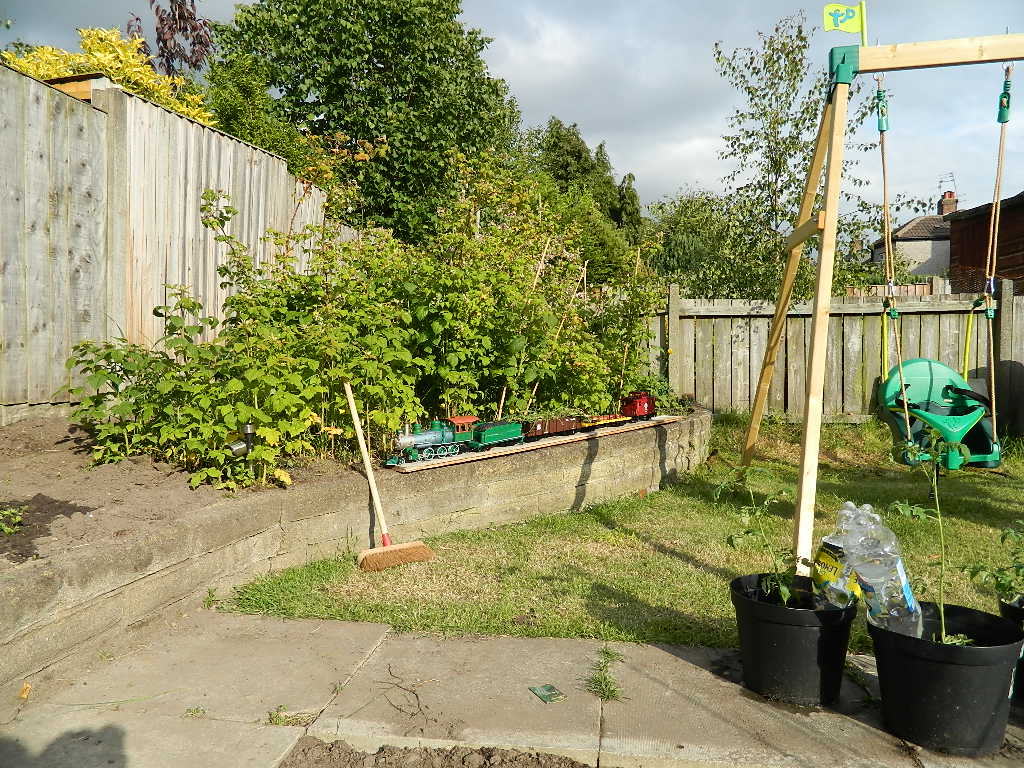 This was the top of the garden, where line will run around the edge of the raised veg area. It'll be behind the retaining wall though 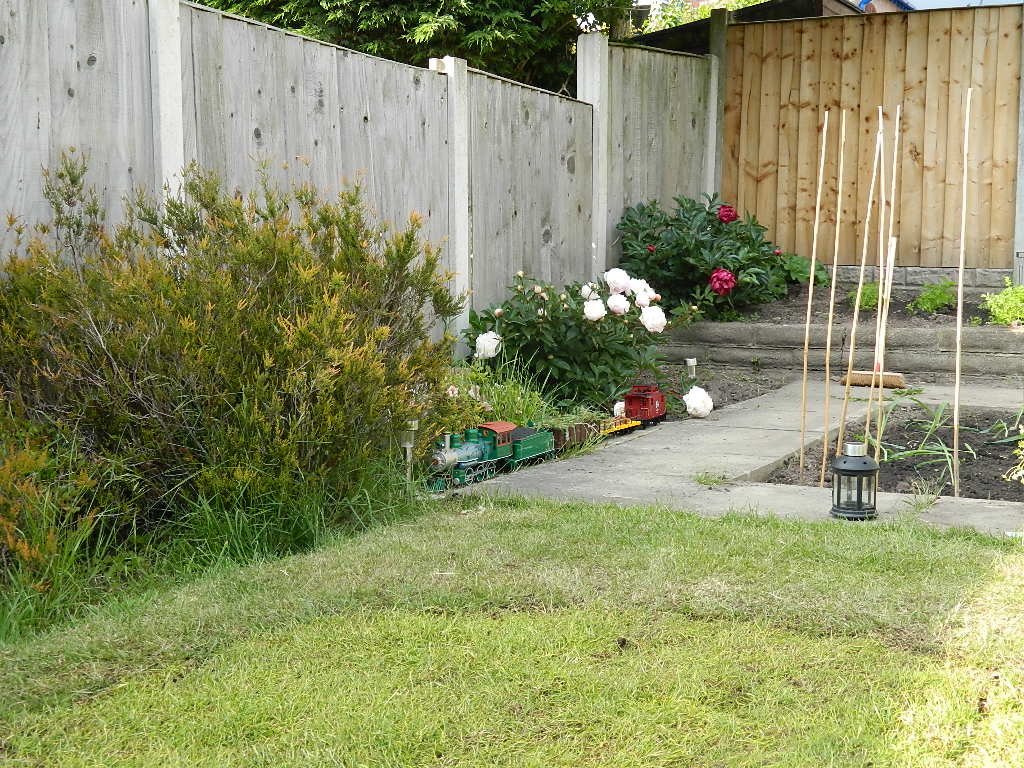 I imagined a high and low level line running at the front and back of the border area. This was abandoned for reasons that shall become apparent shortly. 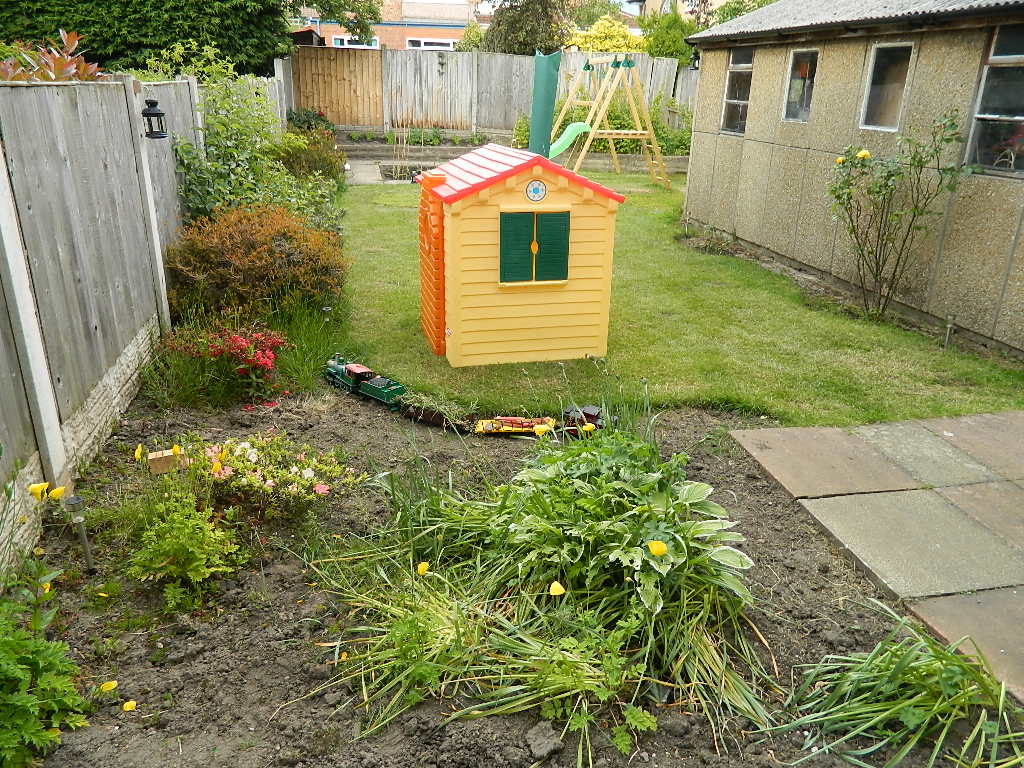 The site of a balloon style return loop near to the house.

That WAS the plan. A few bits of cheapo Bachmann Big Haulers stock from fleabay and of course "creative juices" started flowing (I had a bright idea after a few beers). I spotted a VERY cheap Bachmann Connie at our local Hattons (sold as a non runner, usual split gear wheel), and a similarly cheap Annie, from fleabay once again, I decided on a ruling radius of LGB R3, which coincidentally happens to make the return loops fit my available space perfectly. However, it meant that the idea of a folded dogbone style plan wouldn't work. I didn't have enough room for a double track curve in the corner of the garden, which would mean complicated wiring for reversing loops. Until I decided to change to RC (currently in research stages).

Anyhow, construction has been slow. Painfully slow. Till this year. I think the boss is annoyed with the slow progress. That and our boys have decided that they are old enough (4 & 2) to start grasping the basics of civil engineering. I'e', they ARE "helping." Whether I need it or not! (They are quite good at muck shifting, till they both want to push the wheelbarrow).

So this is where I'm up to; 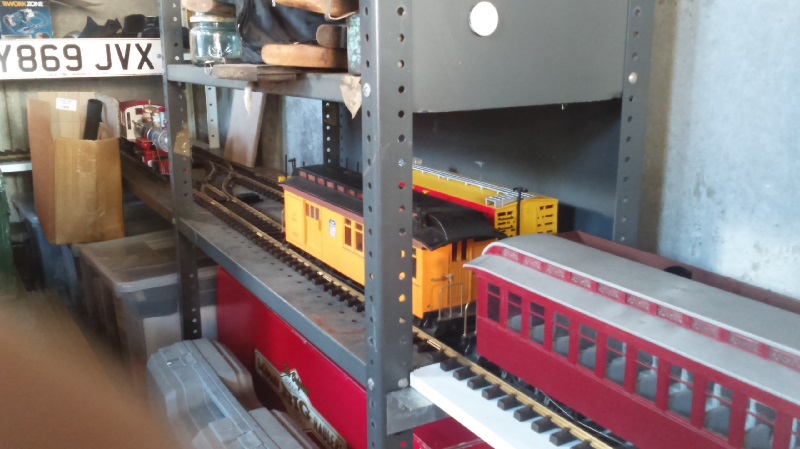 The Garage. A little bit of stock storage combined with workshop. This leads out through the back wall... 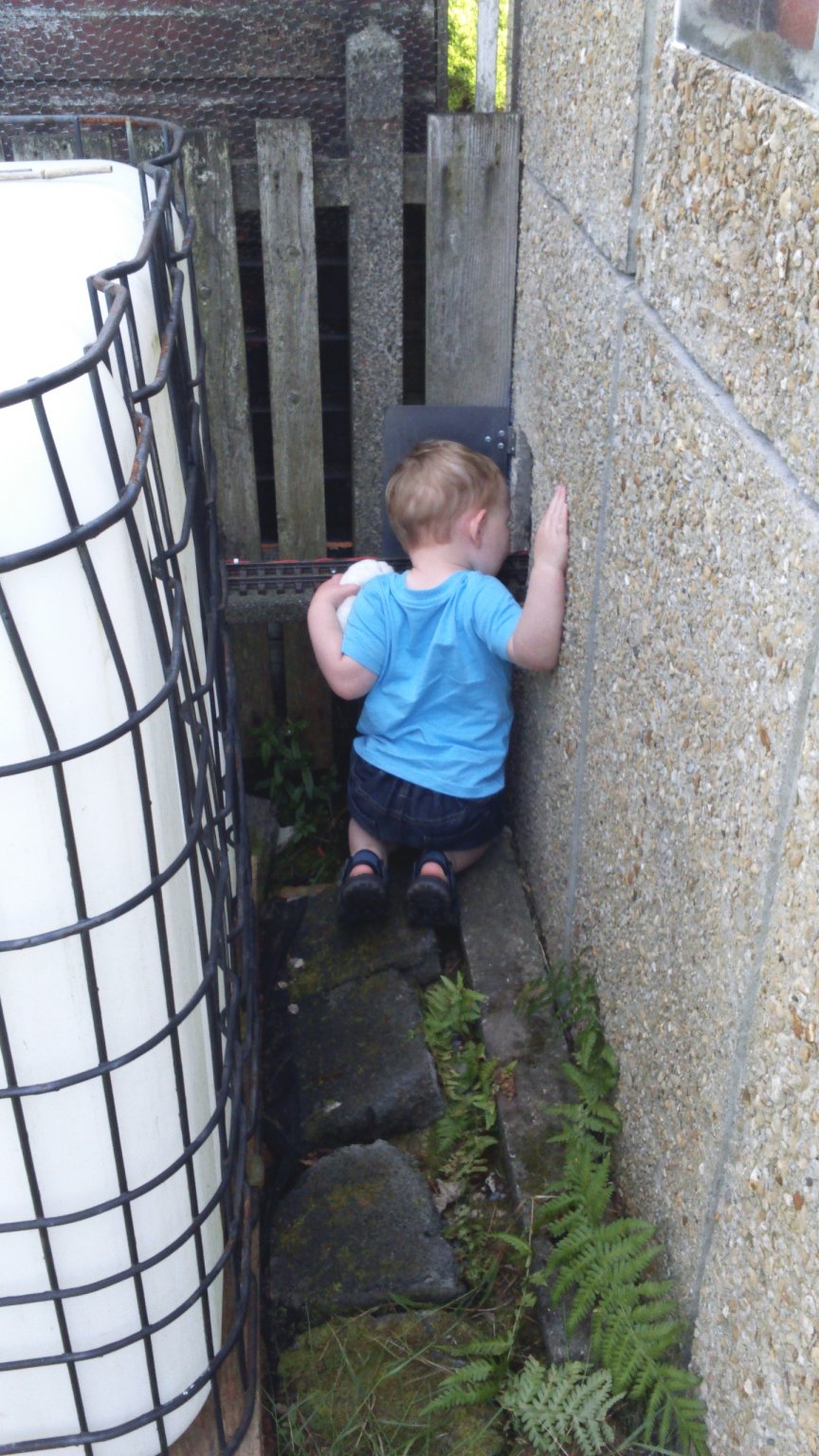 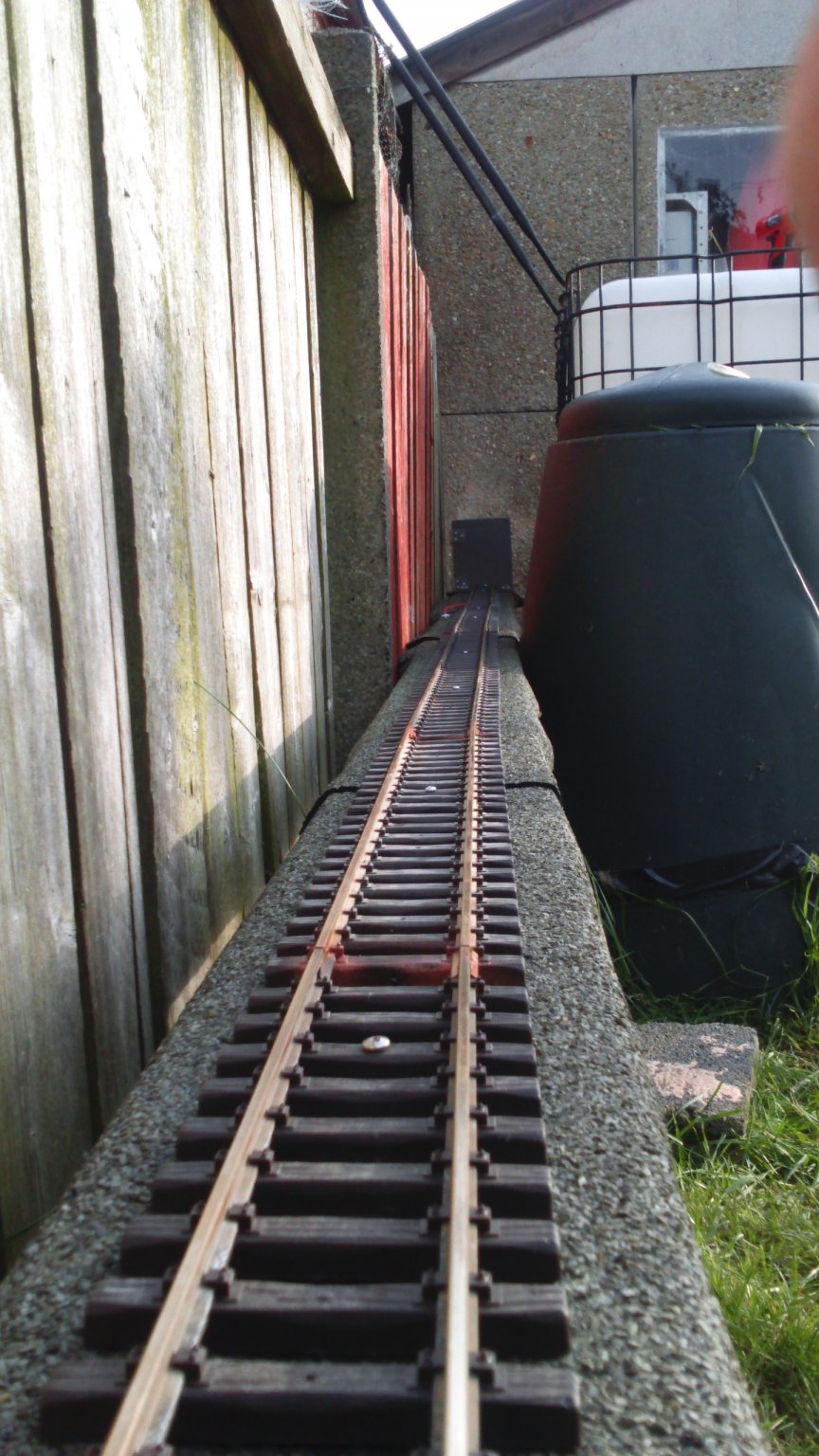 The line then descends a bit as it heads towards Raspberry Forest. 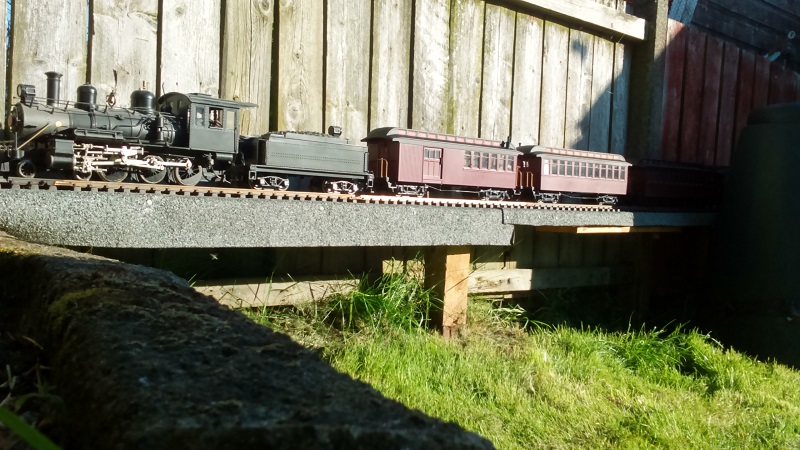 Pictured during a construction phase, #34 is removing 2 gondolas of spoil. 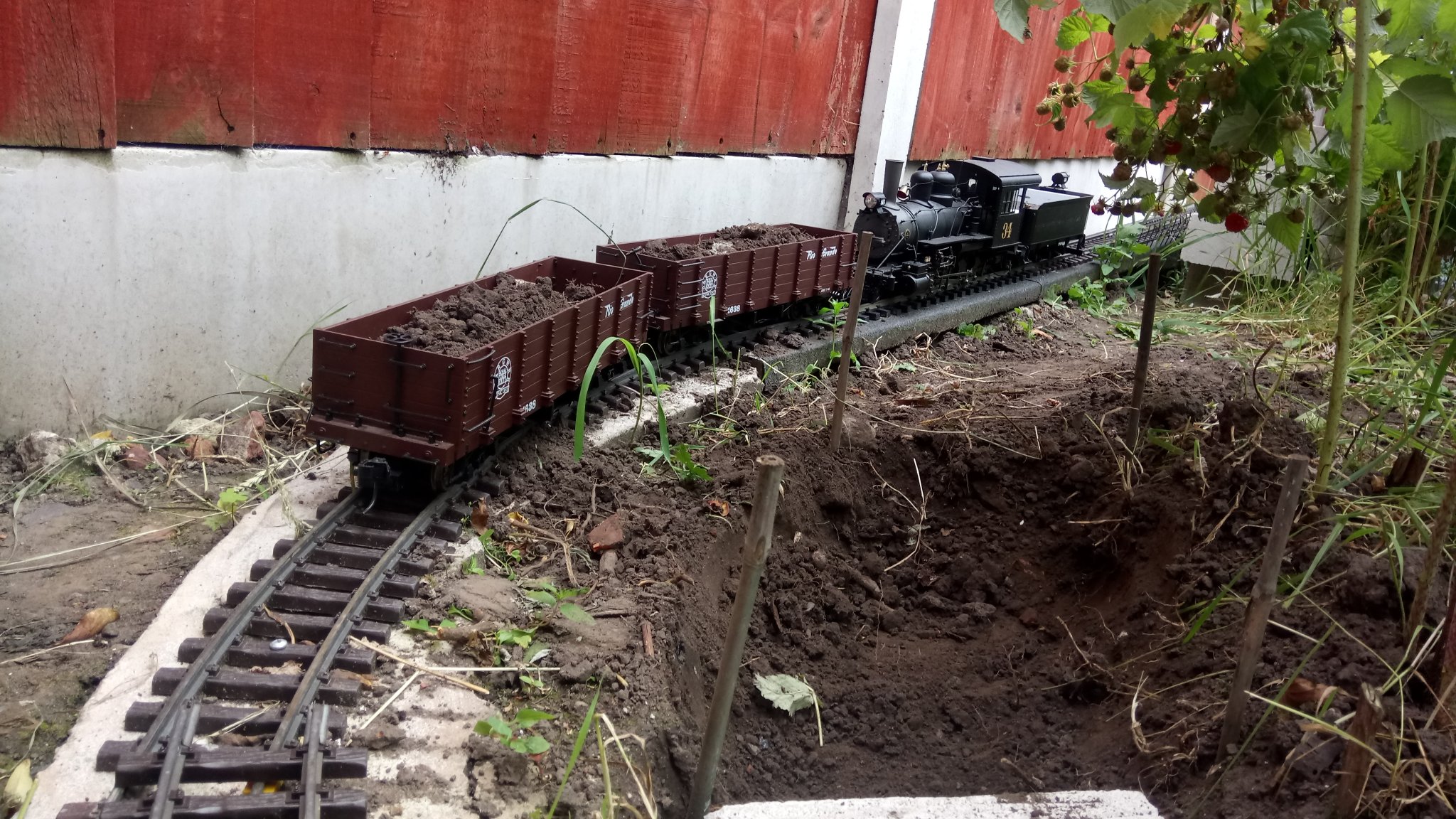 This year, I've had my arse kicked back into gear, and I've cracked on a bit. The return loop around the raspebrry forest has been built. That's blocks laid on a hardcore bed, followed by the grade down the top of the garden to where it leaves the old raised veg plot. The grade is hemmed in by slate, primarily just because I love the stuff (Slate is great!). So just a few pics of most recent progress; 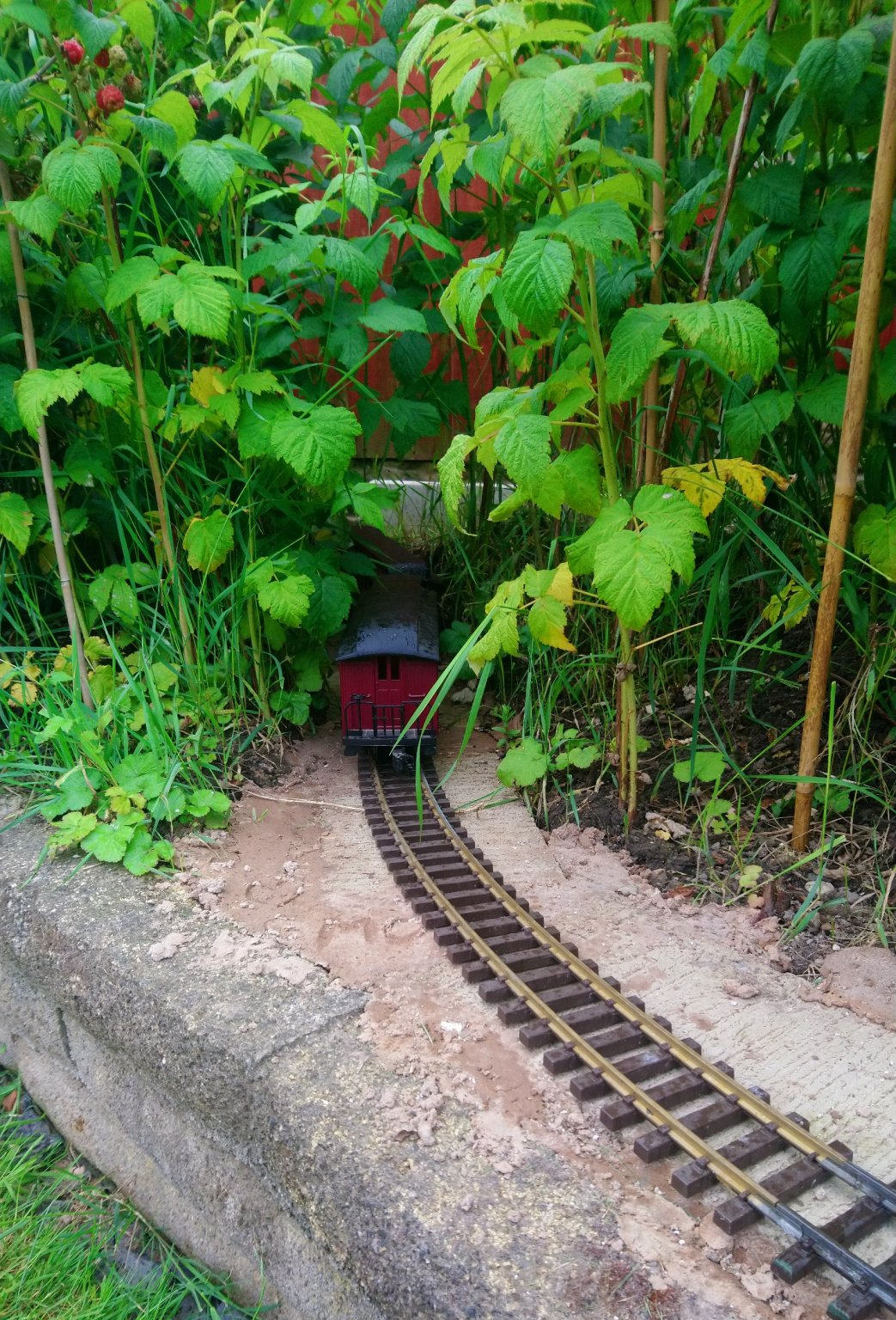 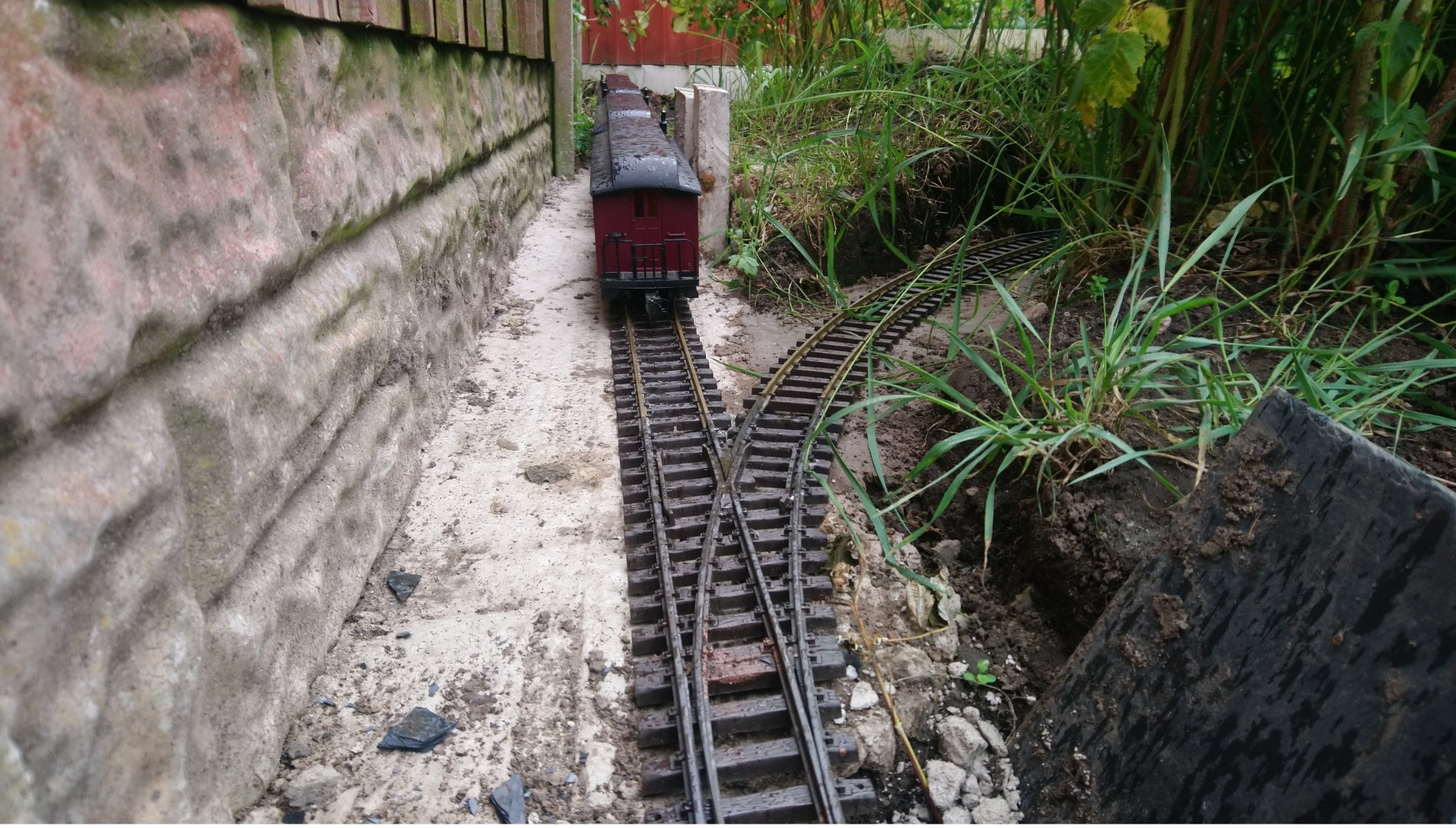 At the moment this point is completely unsprung, and just worked on the trailing principle. It's not caused an issues with a Playmobil DMU set that's been used for (thorough) testing so far. 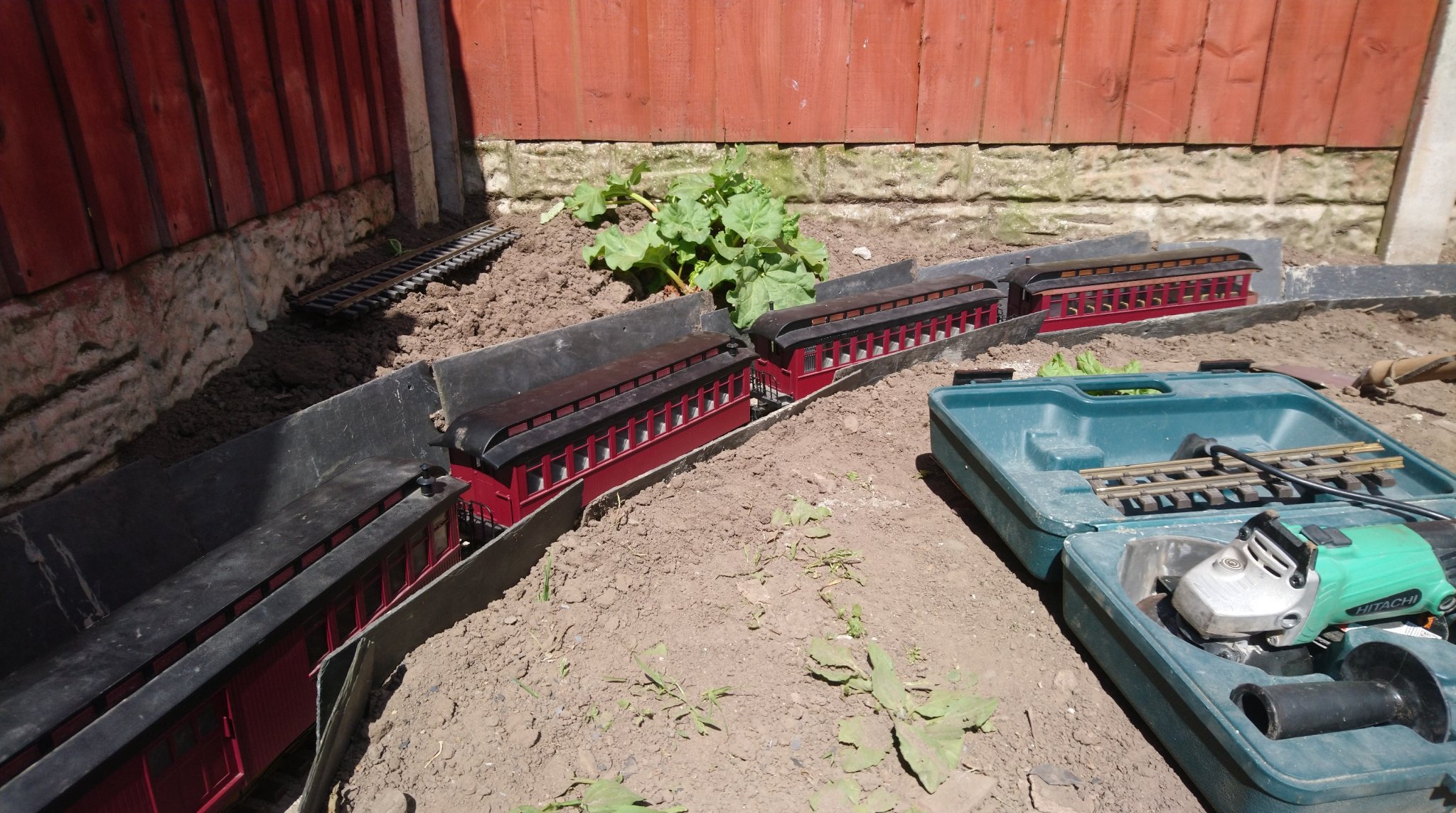 Current end of the line.

Hopefully I'll get some better photos in the next few days, these were all I had on my phone.

Spectacular that you've gone for US outline

The plastic 'stock shed' is a good idea, but w-a-y too small!

I think you may need to revert to the wheelbarrow for spoil removal? Even with 'little helpers', life is too short!

Welcome to the forum Phil.

Gizzy said:
Welcome to the forum Phil.
Click to expand...

Ah!
Excellent! I had missed that vitally important piece of information..

Rhinochugger said:
Spectacular that you've gone for US outline

No not really, it hadn't got too far past tracklaying and structure building, so there was never anything "worth" taking photos of really I'm afraid.


PhilP said:
The plastic 'stock shed' is a good idea, but w-a-y too small!

I think you may need to revert to the wheelbarrow for spoil removal? Even with 'little helpers', life is too short!

Plastic stock shed? Huh? what on earth is this bloke on about? The garage is concrete? I'm sure I said that? Lunatic... Must be something in the name?

In my defence it's been a long week!

Always nice to see an ex-lurker....
Click to expand...

PhilP said:
Ah!
Excellent! I had missed that vitally important piece of information..

Cheers, with any luck, it should give me some extra kicks up the backside to make progress.

Currently waiting for some aluminium stock to start bridge construction!
0

I'm just having a senior moment. Now what did I come here for?
0

As requested, some more photos! 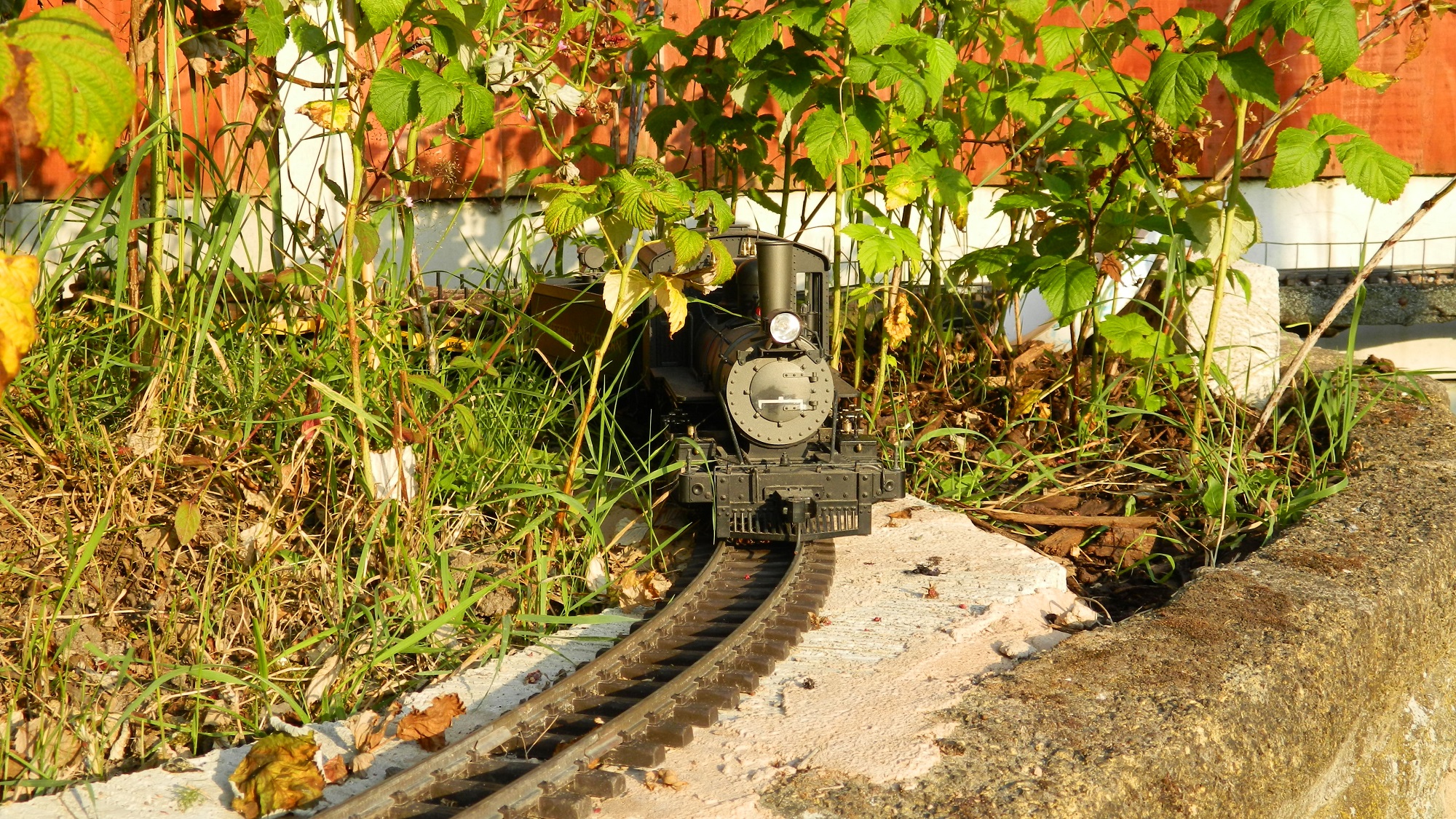 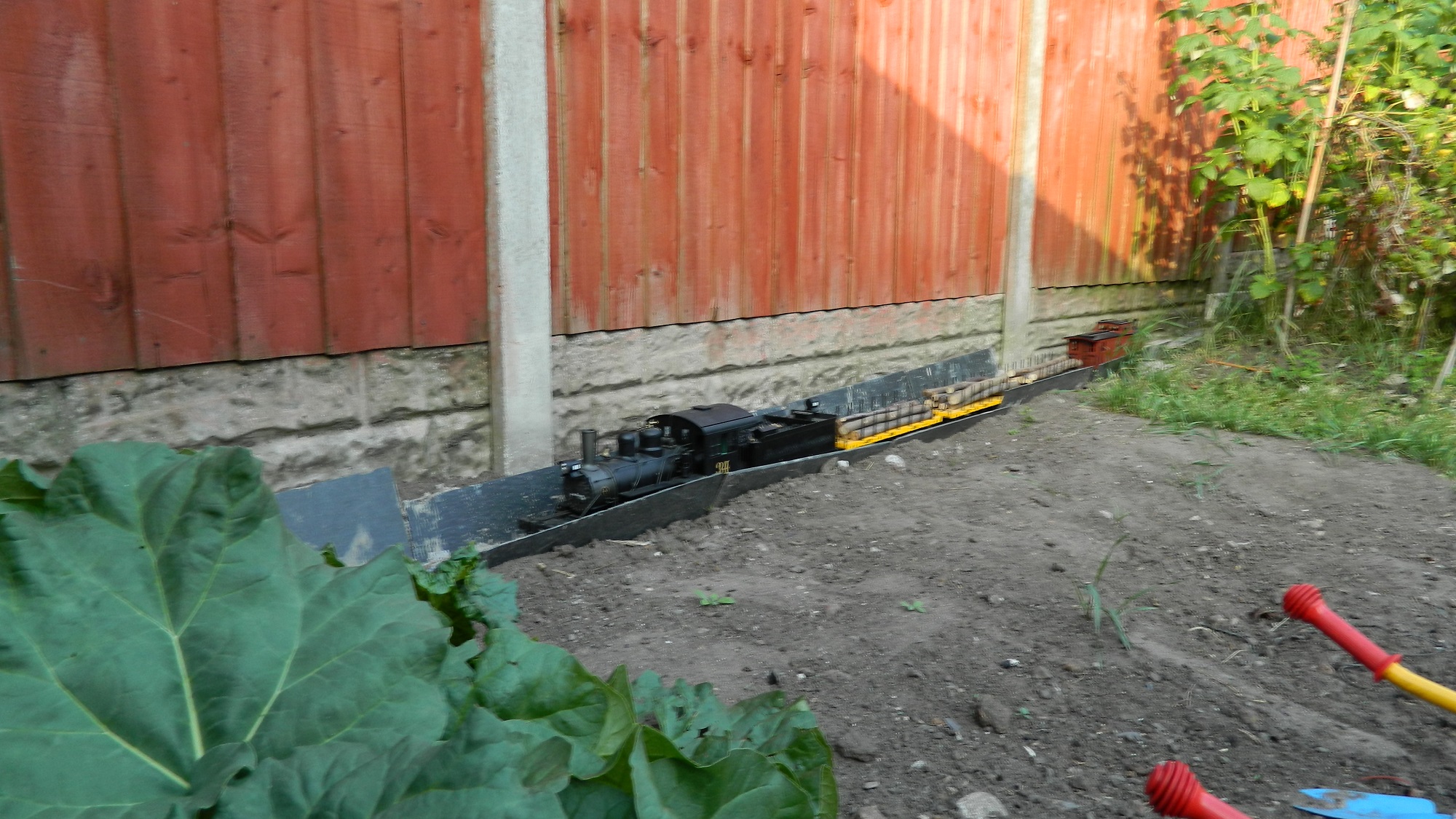 #34 on a timber train, rounding the curve around the raspberries before starting the descent. 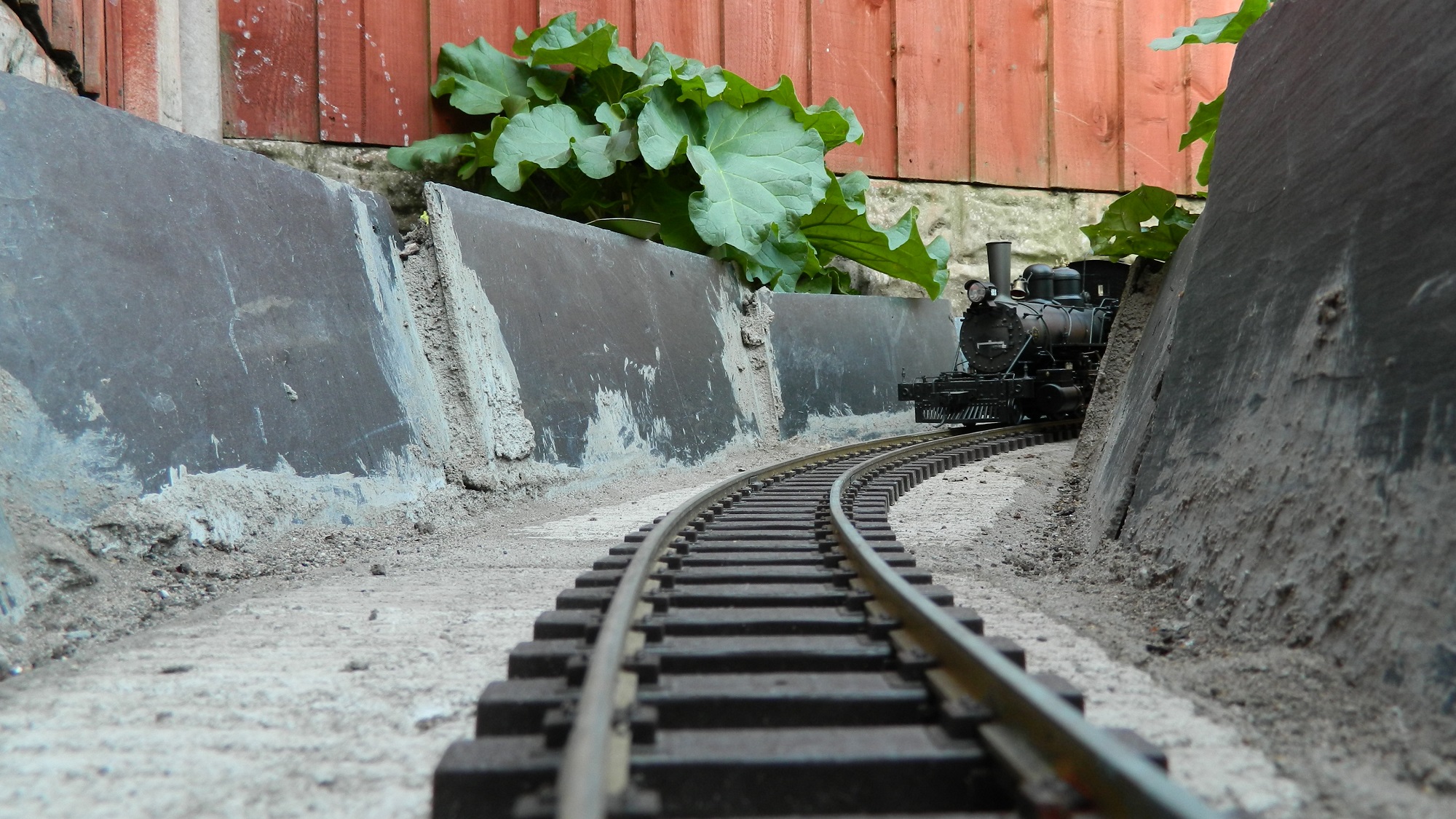 Cruel closeup showing how badly I need to get my jetwash back to clean up the slate banks! 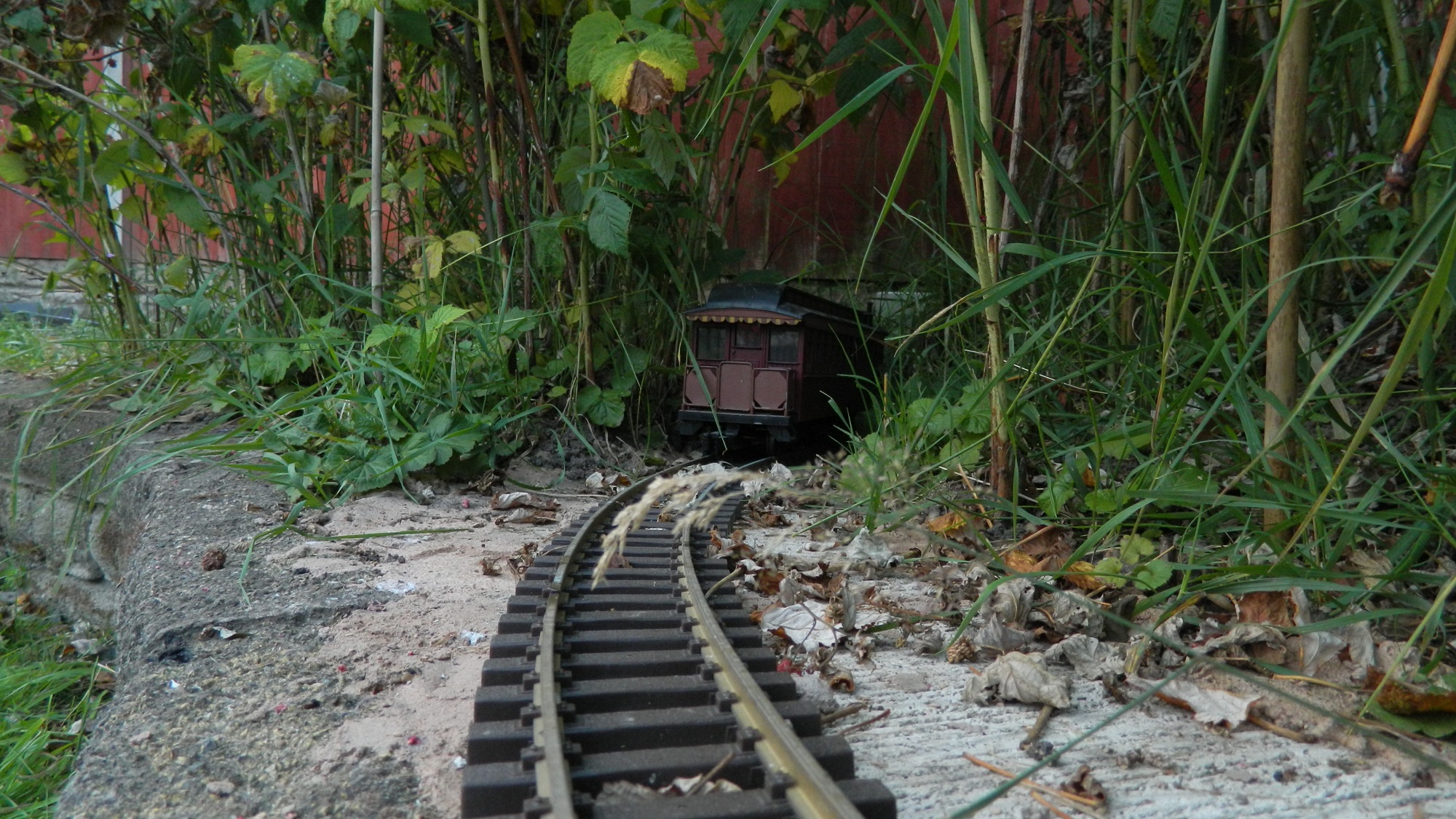 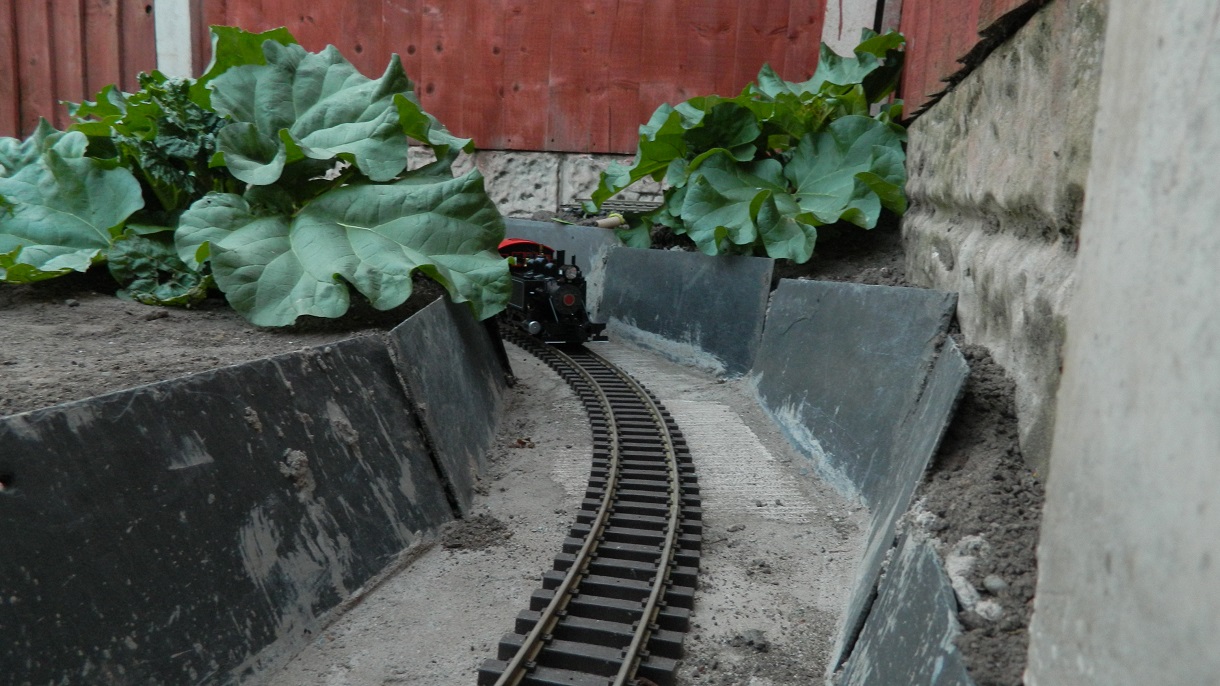 #34 on a timber train, rounding the curve around the raspberries before starting the descent.

Cruel closeup showing how badly I need to get my jetwash back to clean up the slate banks!

Hm be interesting to see if the Jetwash will getbthat well dried Cement off the Slates. Moral of story, never loan Tools out. If someone wants to use your Jetwash go round with it, do the Jetwash for them and bring it straight home. The it is present when you need it.
Expand signature
JonD Dunnyrail East German Harz NG circa 1981 in Cambs. Link to my Railway Build A new Railway is Started - G Scale Central Dated vid of trip on my line mihi necesse est optimus
0

Why bother (washing it off)?
Will soon mellow, and will probably hold a little moisture, and grow moss, to soften the edges a little..
0

The civil engineering department has been busy through the latest monsoon season! 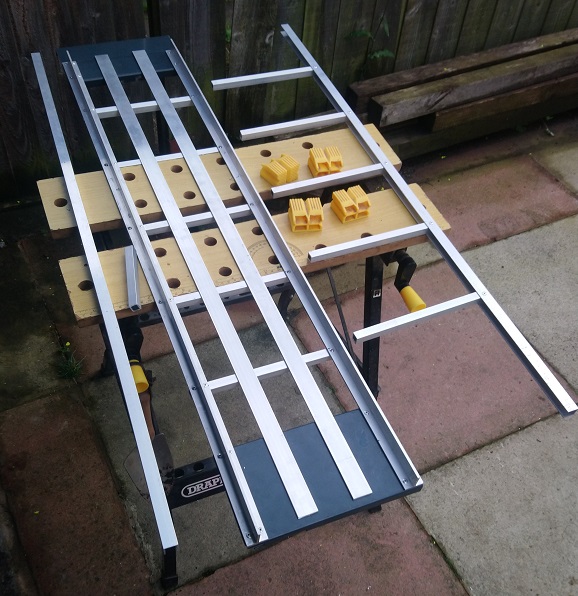 The basic deck of the bridge.

Starting the erection of the first half of the bridge. The finished structure will be two through truss bridges sat on a central pier. I'm trying for a quite open sort of look for the bridge deck, so the deck will probably be Tenmille rail sat in a mixture of check rail and plain chairs, fixed to the flat strip that is visible in the top picture. 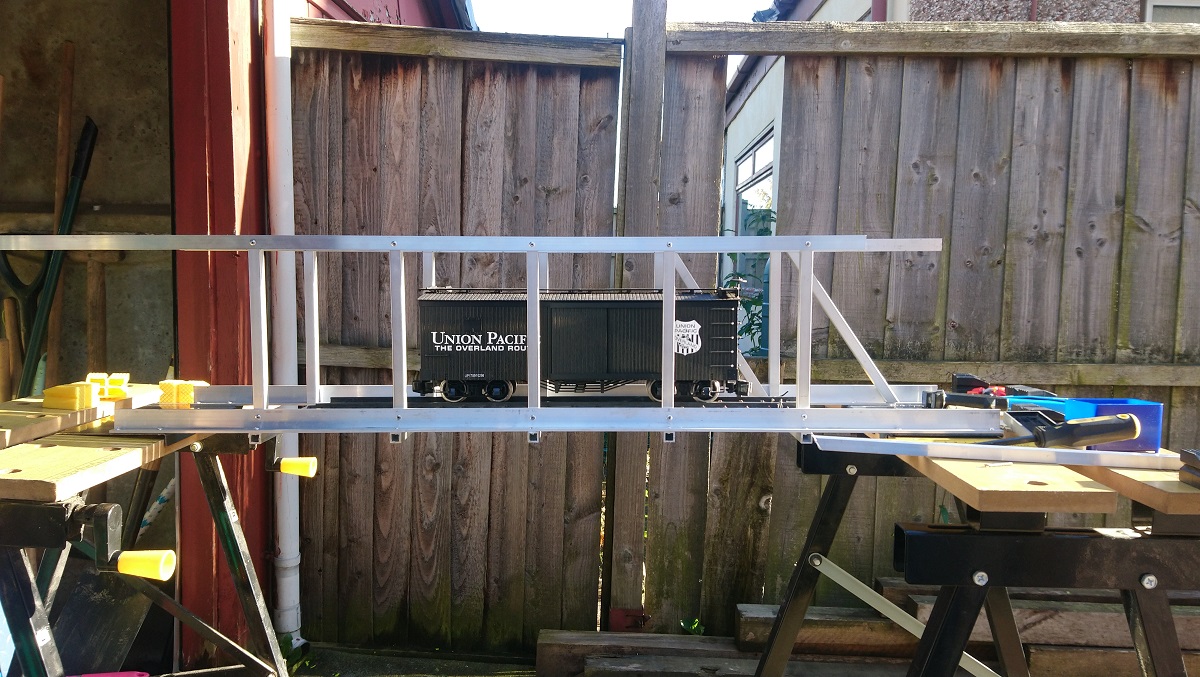 Just snapped the last drill bit I had in the right size, so off to the local indy DIY shop at lunchtime at some point this week!
0

Managed to get the supporting piers for the bridge done as well as finishing one of the spans. 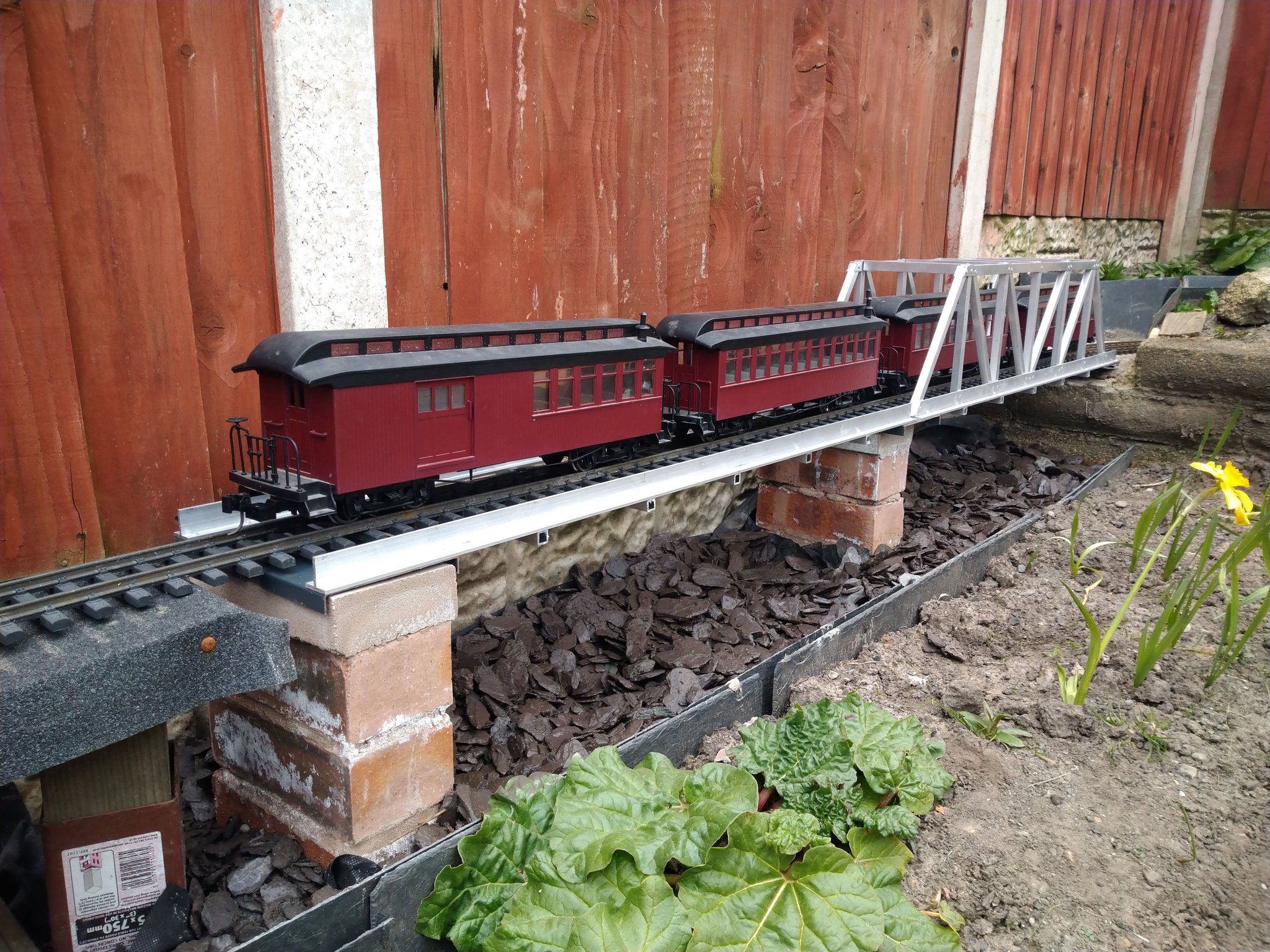 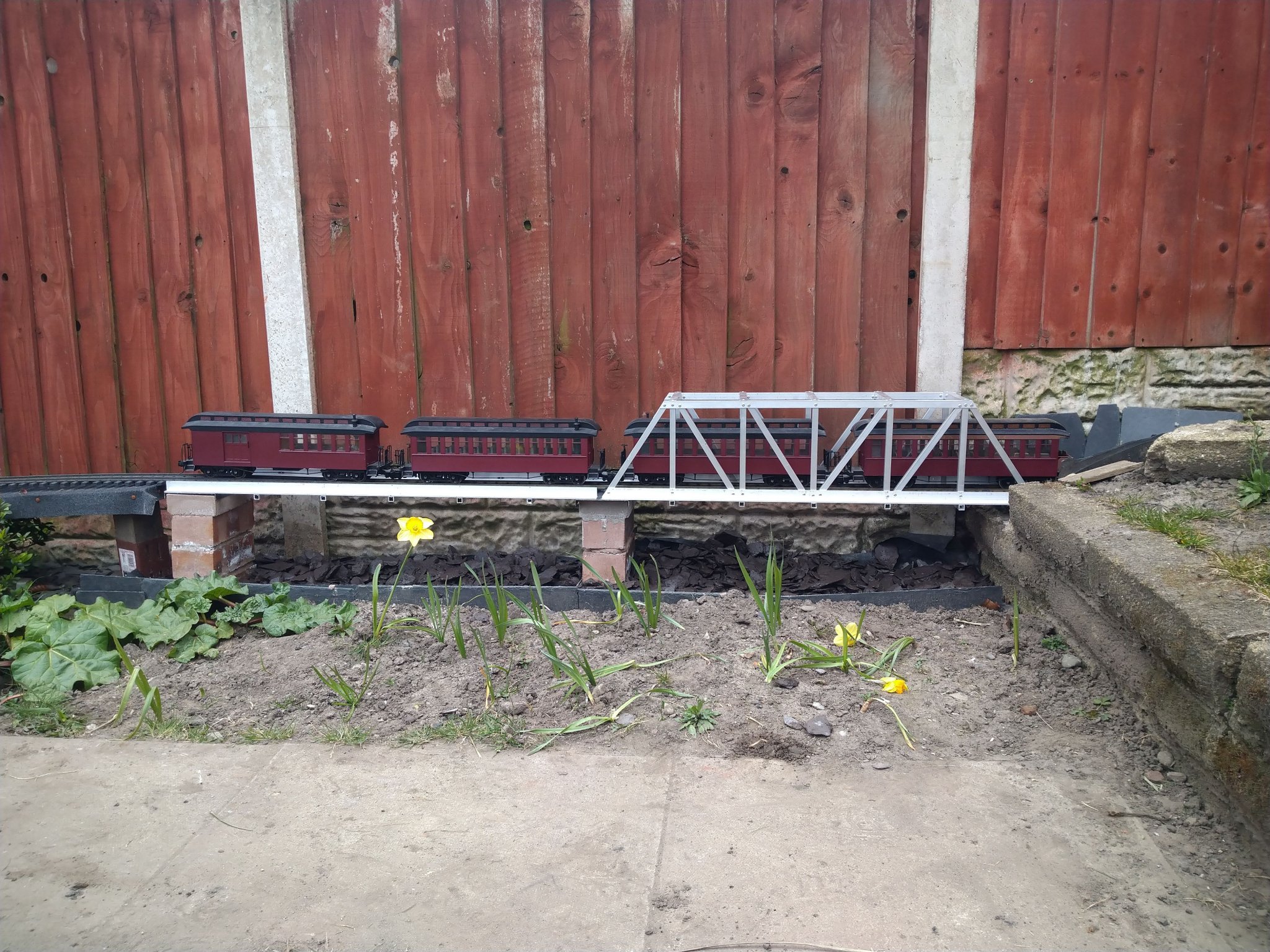