You are using an out of date browser. It may not display this or other websites correctly.
You should upgrade or use an alternative browser.
Sort by votes
Y

I find vendors out of stock, but nobody seems to have these. Hope someone can help me on this. Jim
0

Hi Jim - Aristocraft went bankrupt at the end of Year 2013, so their track is no longer produced. You can find some Aristocraft track new and used on eBay. Also, I see that some of the model trains dealers (I'm LGB only Dealer) have some stock such as Charles Ro USA Trains in MA. Just do some Google searches.
Toggle signature
Tom White
LGB Railfan USA
Website: www.OldDominionRailways.com
0
F

Good luck....Aristocraft is out of business, so there is no new stock.
Those are good general purpose gauges, which generaly are close to, or dead on with NMRA standards. I have several of them, and use them continuously.
The "Mysterious thing was that few of the Aristo wheelsets, track or switches was "On" with the gauge they produced.
If some manufacturer was to produce that gauge today, it would be a very useful tool, if everyone used it.
Of course, there is that continous, lingering cry from the "Fools" that seem to populate some Large Scale circles....."We don't need no durned standards".....as they frustrate themselves with faulty gauged wheel sets, track gauge, and coupler heights...causing "Mysterious" derailments and switch/turnout/point problems.....which they are continuously asking advice to solve....go figure.... and yes those same standards apply for LGB equipment too....I wonder why LGB in all their wisdom has never produce the same sort of gauge....
Toggle signature
Sir Frederick James Percy Mills
0
Y

I have done a google search to no avail. Everyone seems to be out of stock. I can't find any remaining stock anywhere. I tried Charles Ro USA Trains and they did not show anything when I did a couple of searches.
Reactions: 1 user
0

Yeah, it was a nice tool and they went out of business 7 years ago.... should not be a surprise.

You can watch on eBay , and perhaps ask on the Facebook G scale sales sites... ... I have 2 of them, they were relatively inexpensive... If you get one of them, be sure to check it with a caliper or micrometer, a couple of parts of the gauge are off a few thousandths.

Is there a drawing of this track and wheel gauge somewhere ?
Toggle signature
my railroad videos are here : Southwest Indoor Railroad
0

No, just pictures: (the levels fell out of the large rectangular slots, they were crap anyways) 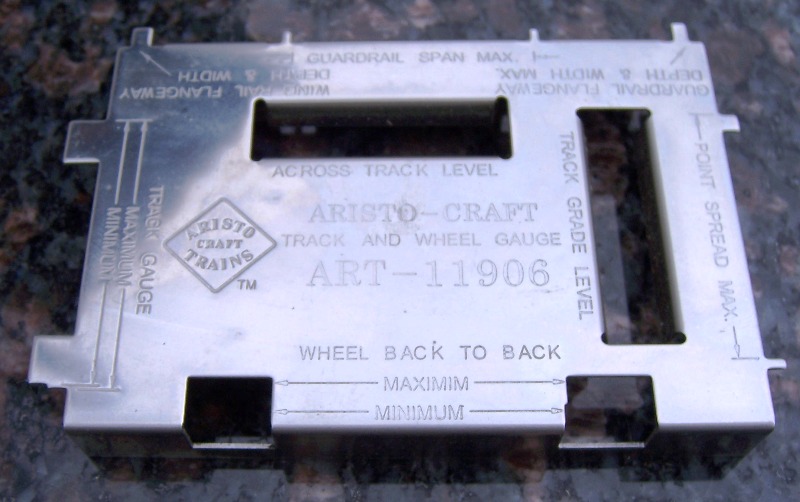 Toggle signature
Visit my web site for information, tips, how-to's www.elmassian.com or email me at greg@elmassian.com
0

While it is not exactly what you are looking for Sunset Valley Railroad sells a track gauge for 45 mm and 32 mm for only $6. The web site is https://www.sunsetvalleyrailroad.com/ Pete Comley is the owner and is very helpful.

I second what Railfan said about Pete. All my track is from SVRR and I have two of the gauges and they work really well for me.