A new Railway is Started

We had a running day here on Wednesday and Silberhütte was well congested. I normally after a session play around with how the Wagons will be set up for the next running session, defining destinations and removing or adding loads as appropriate. During this process it became apparent that Silberhütte has a couple of issue with the stated Storage Capacities. Here is the point end of Road 6 which has a Storage Capicity of 5 x 4 wheeled Wagons. Below you can see that the Balconied end Wagon has extended an inch or two beyond the red and White Fouling Point Marker. Balconied Wagons tend to be a little longer than the Standard LGB 4 Wheeled Wagons. Not good as any Train passing through the point seen just below is likely to give that Wagon a Side Swipe. 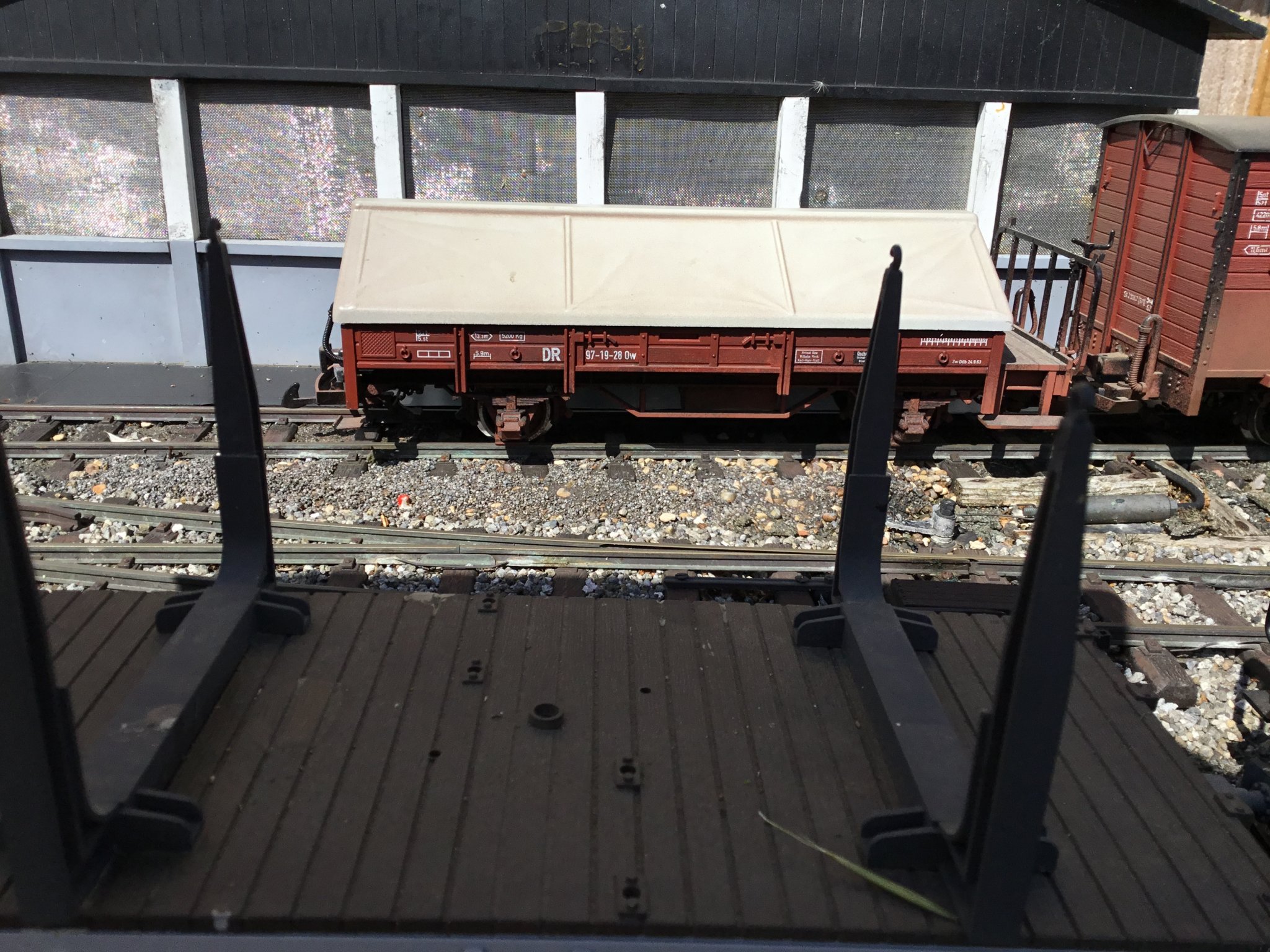 The solution was pretty simple and a couple of inches added to the other end of the Siding to resolve the issue. Of course the Signal had to be moved a little as well. Adding a Short Length of Air Pipe as can be seen by the Air Pipe Joiner. 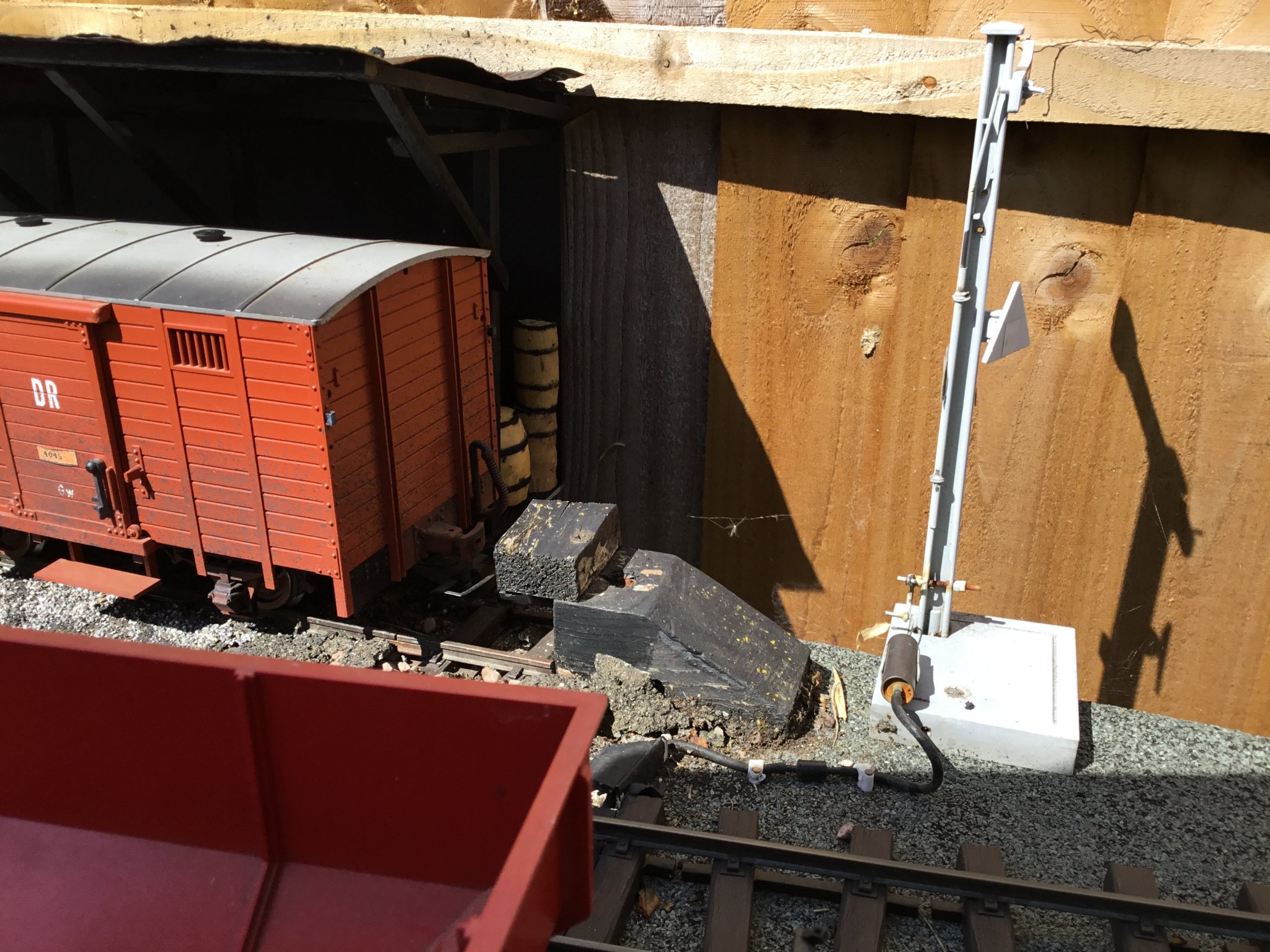 Now that Wagon is ‘inside clear’ as we used to say on BR. We could have an issue if more than 1 Balconied Wagon is placed in that Siding but there is just no room for any other lengthening so this will have to do. 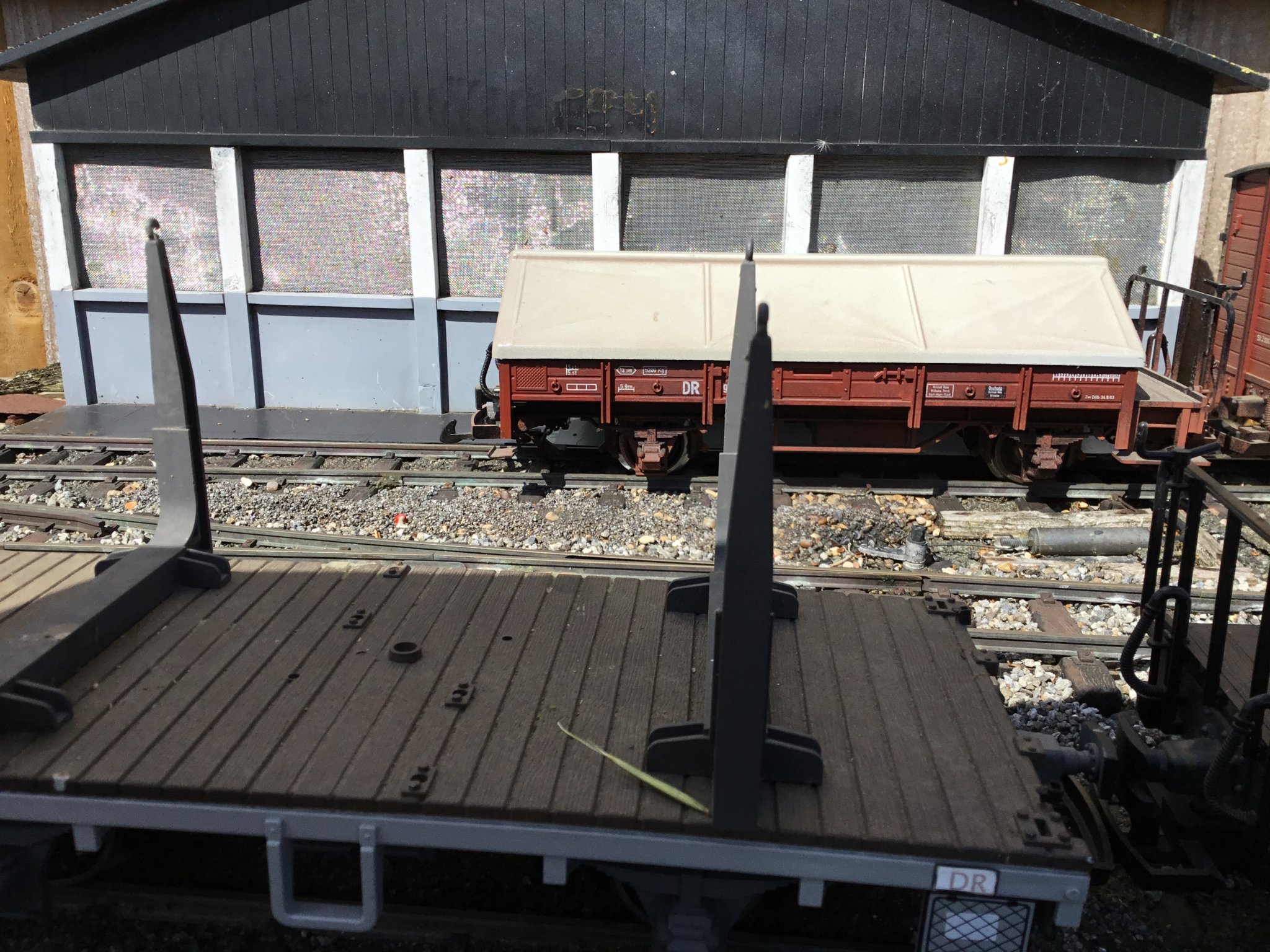 The next issue was how to make some more space by extending Road 7. Here can be seen the problem with this Road, with a stated capacity of 8 Wagons with one covering the point this is Wagon Number 7 not even in clear. Again something needed to be attended to. 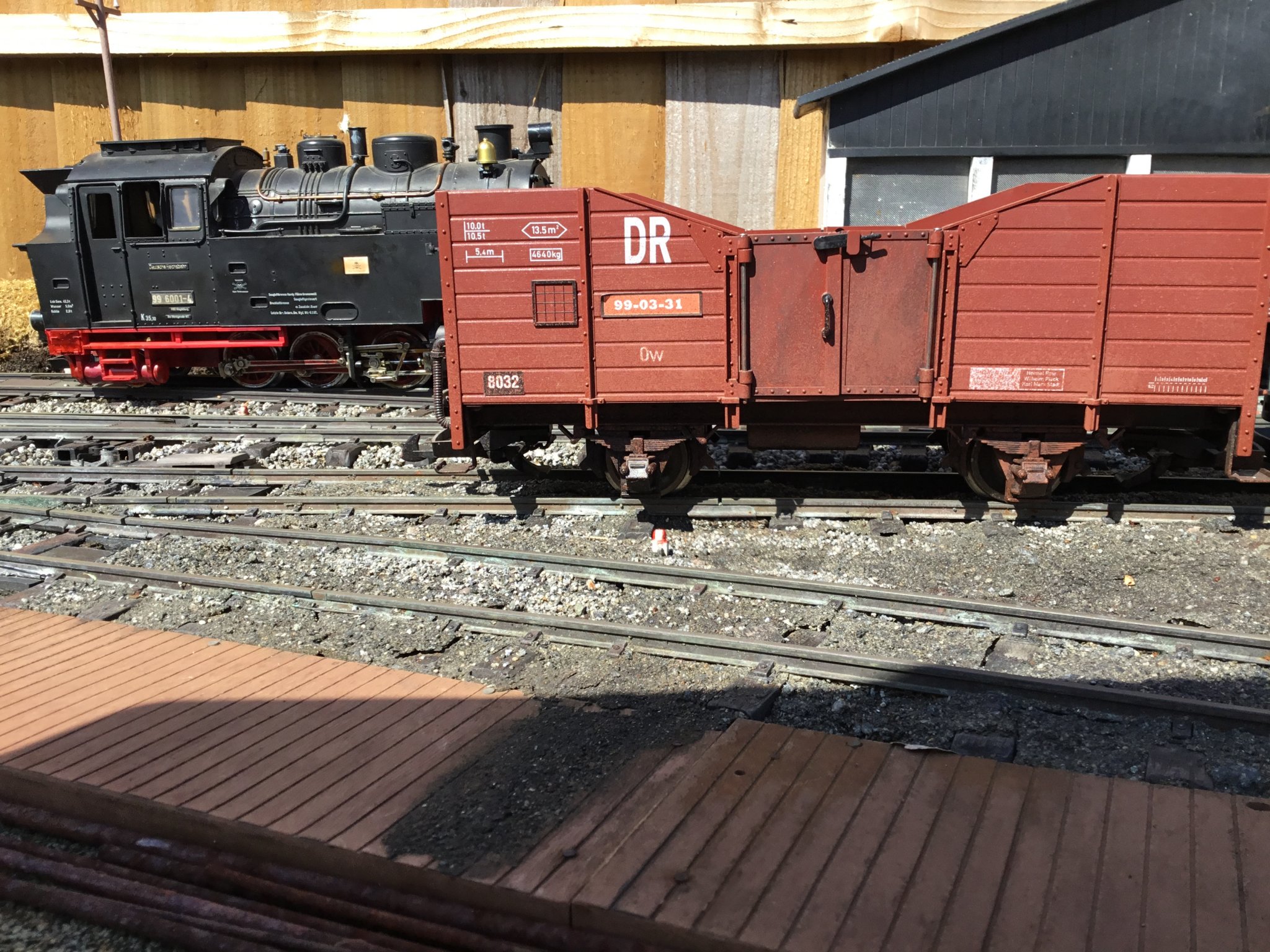 The board at the far end had a little space spare, I decide that a 10 inch section of Streamline would fit the bill. 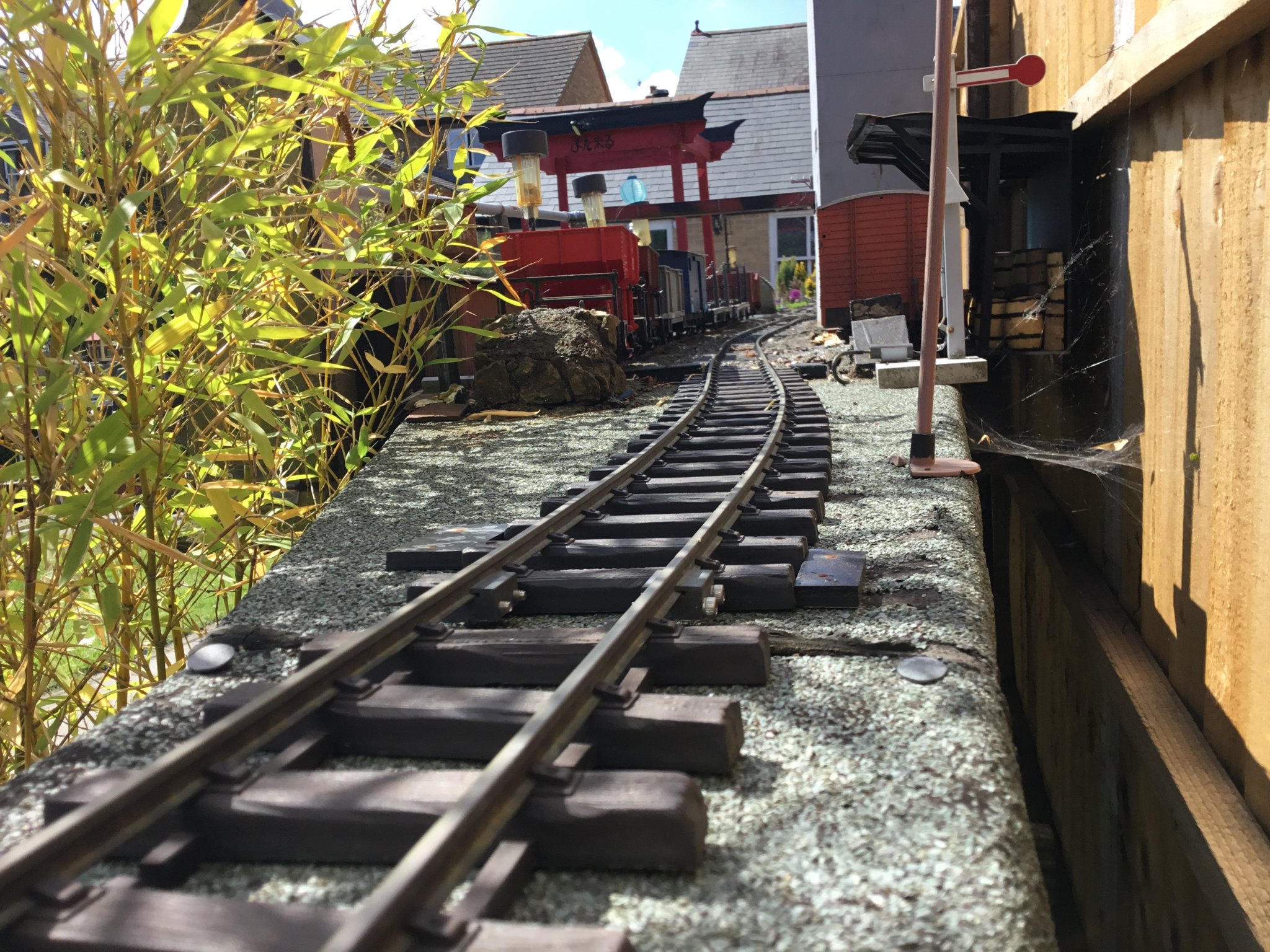 Fortunately I have a few Yards of Rail only in the Loft and a few Sleepers lurking in a Box. So this section of Track was made up. 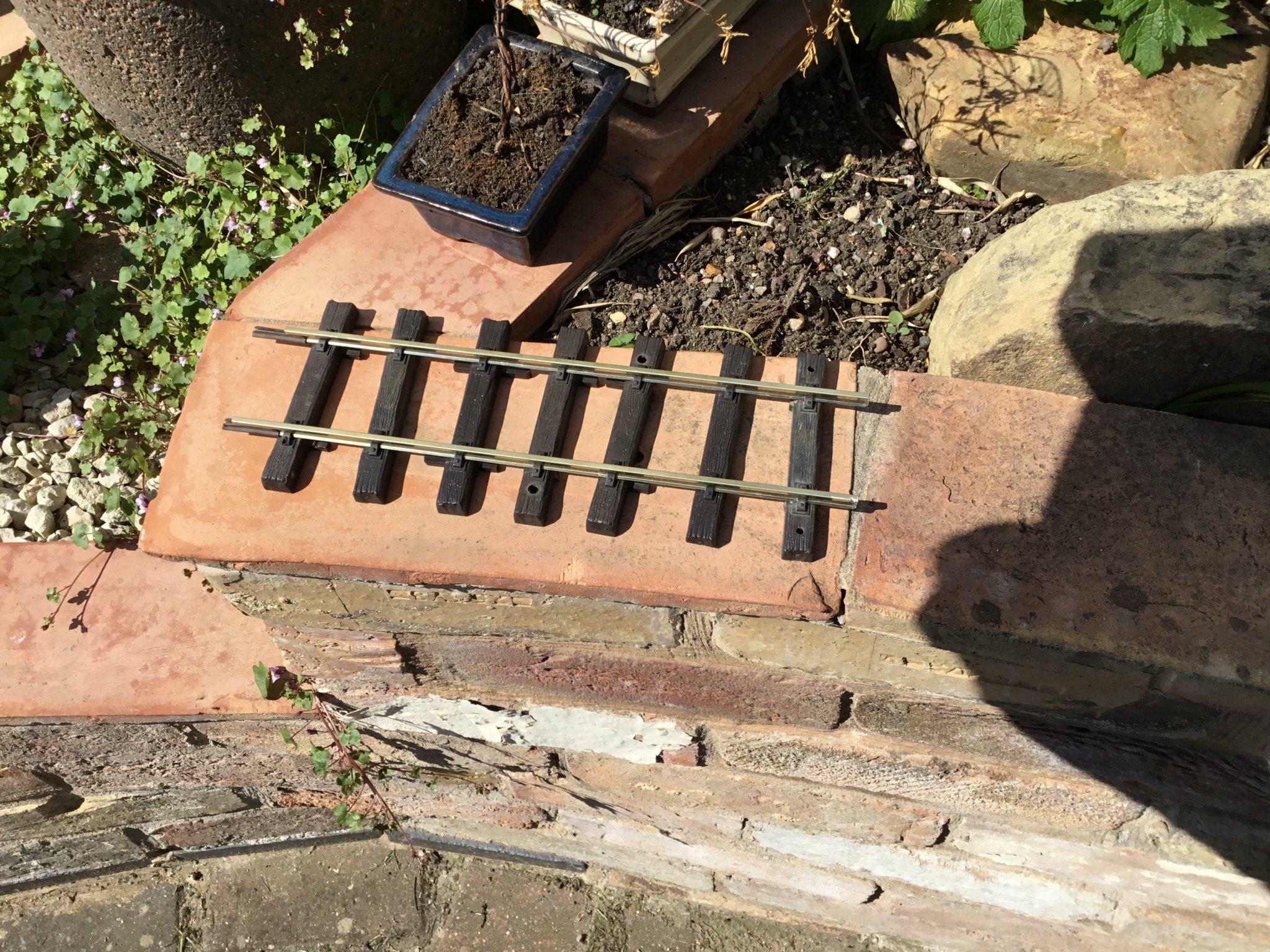 And offered up to see if it would all fit in. The Bamboo in its Pot was moved out for the duration to make the work on both jobs easier. 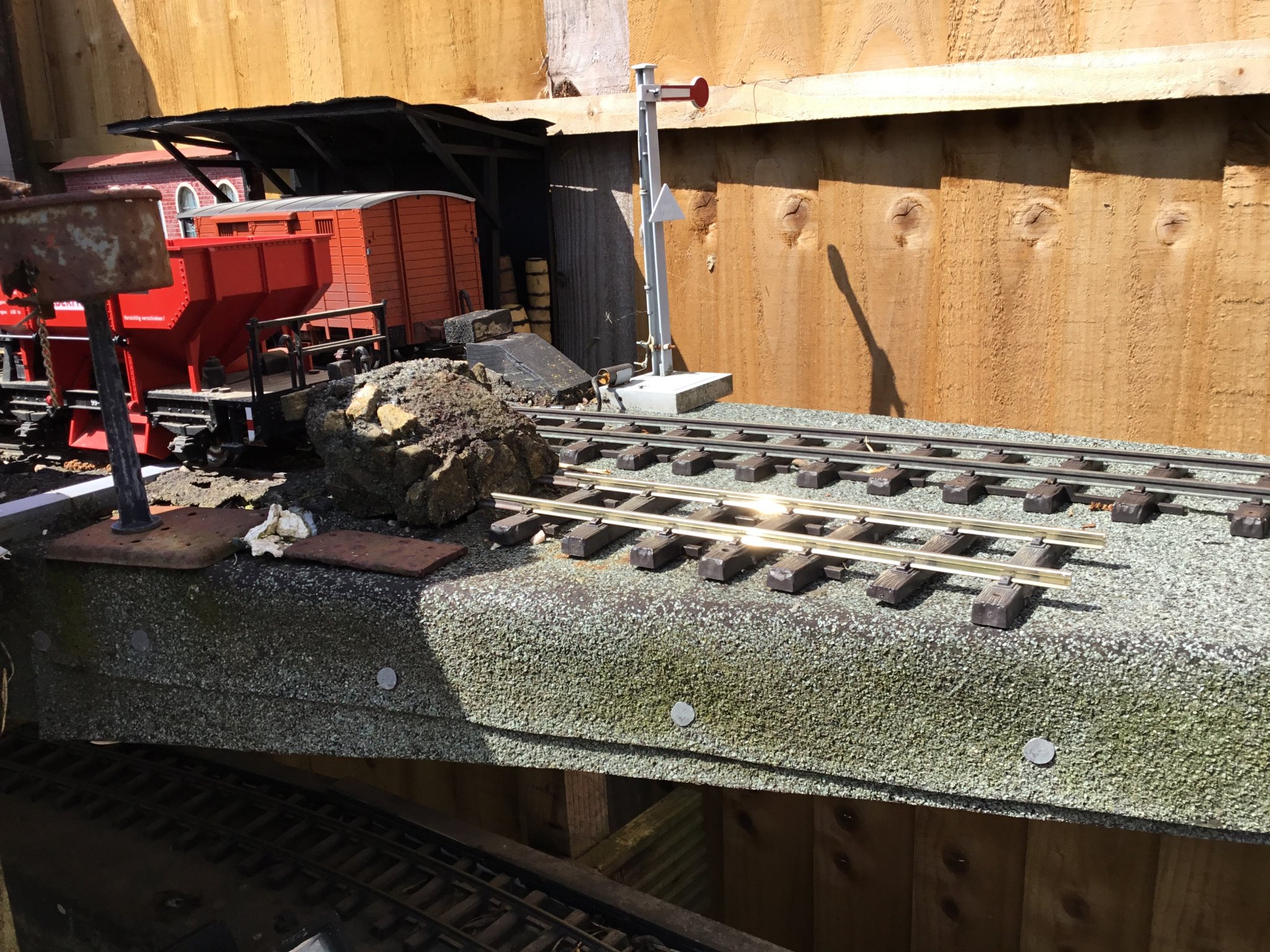 First the Buffer Stop needed to be removed and the Nail Holes filled with roofing compound. This will stop any dampness getting in to rot the Decking below. 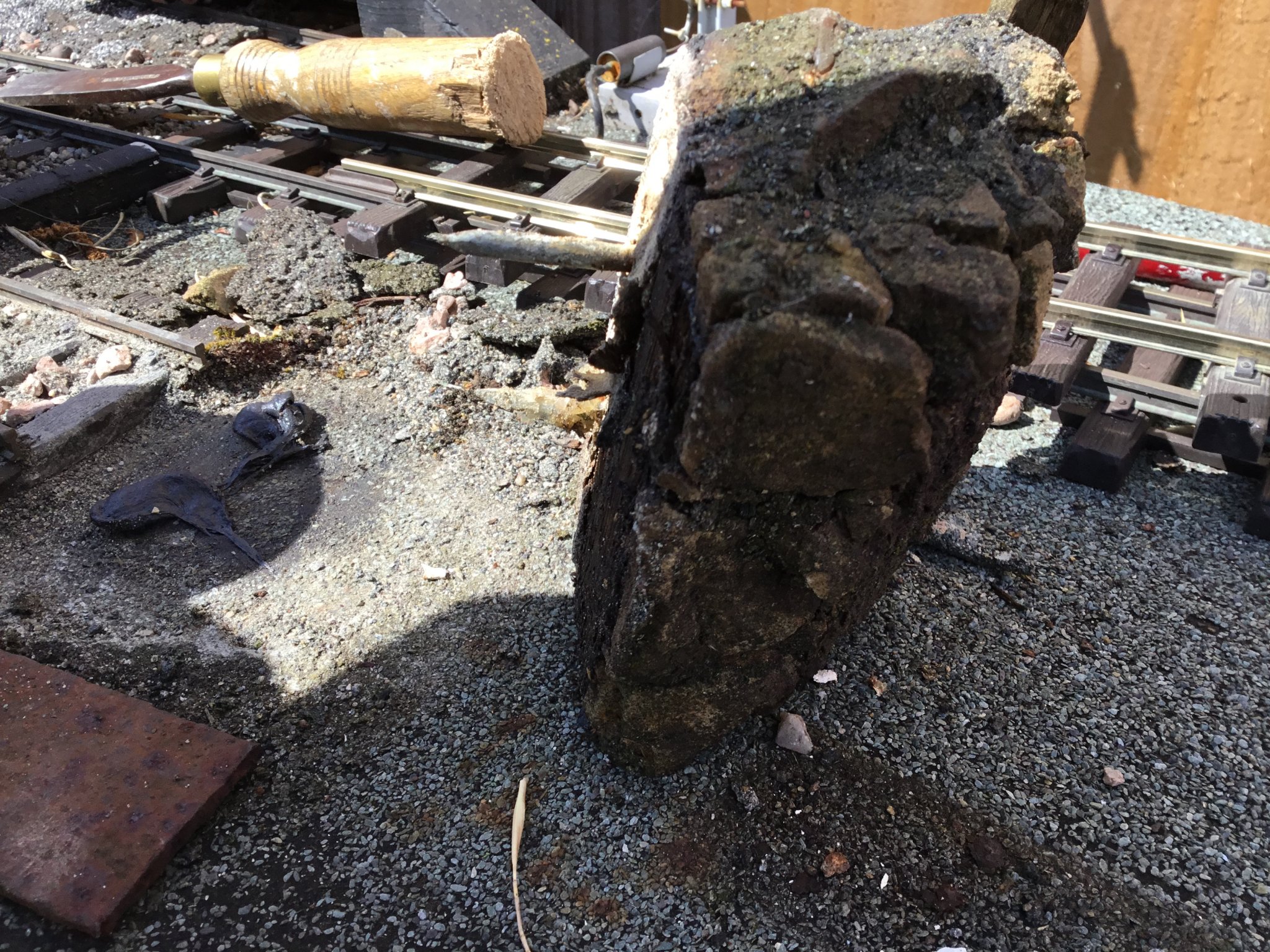 Here the buffer stop and track have been placed. Ballast and gunge added with plenty of External Grade 50/50 with water to glue it all down. 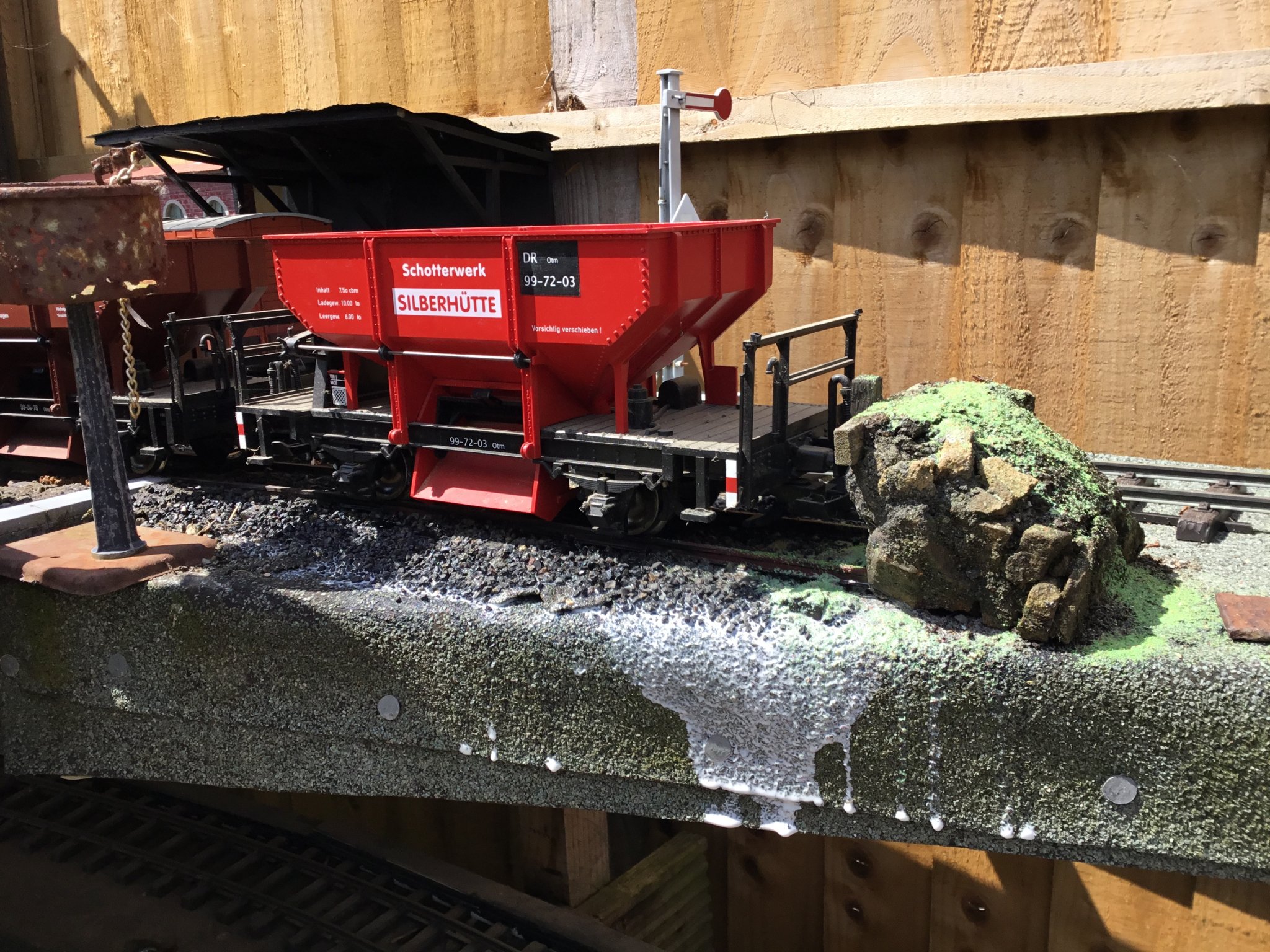 Finally not only do the 7 Wagons now fit but 2 more can be added admittedly fouling the point to the Fuel Road, but the Yardmaster can resolve that issue by moving just those 2 surplus Wagons out of the way when access is required. 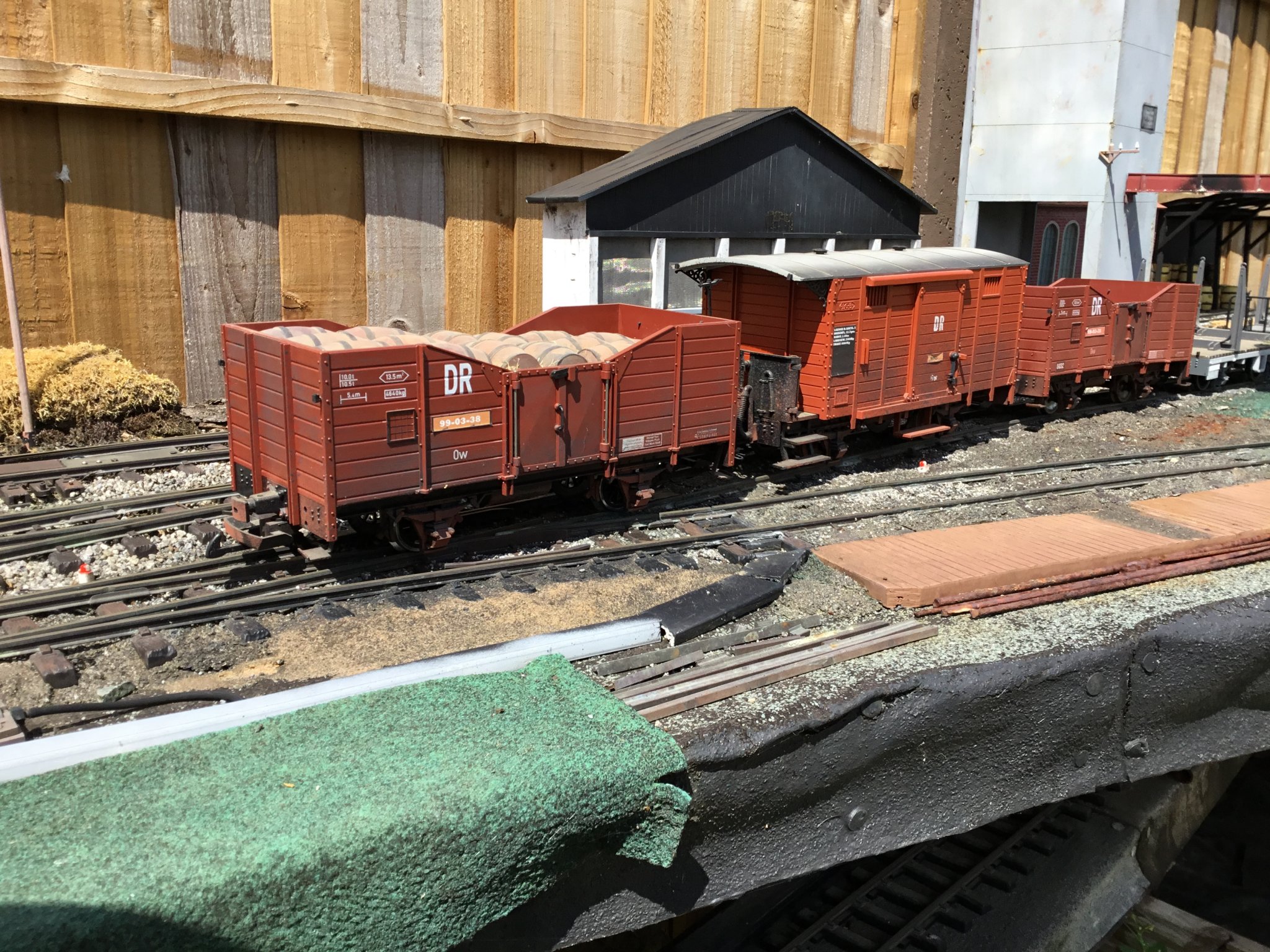 Some buildings have been added / upgraded with another on the workbench. First up one that has been lurking around for a long time, probably built when I lived in Luton so at least 19 years old. Was made out of old Expanded Polystyrene Ceiling Tiles removed from the main Bedroom. These days they are considered a Hazard, but were fairly normal in the 80’s when I moved in. Anyhow some were saved and made into Buildings Coated with External Grade Tile Adhesive and Wood surrounds to the Window. Here is a not very good shot of it prior to the upgrade above and to the right of the middle of the Tank Wagons. 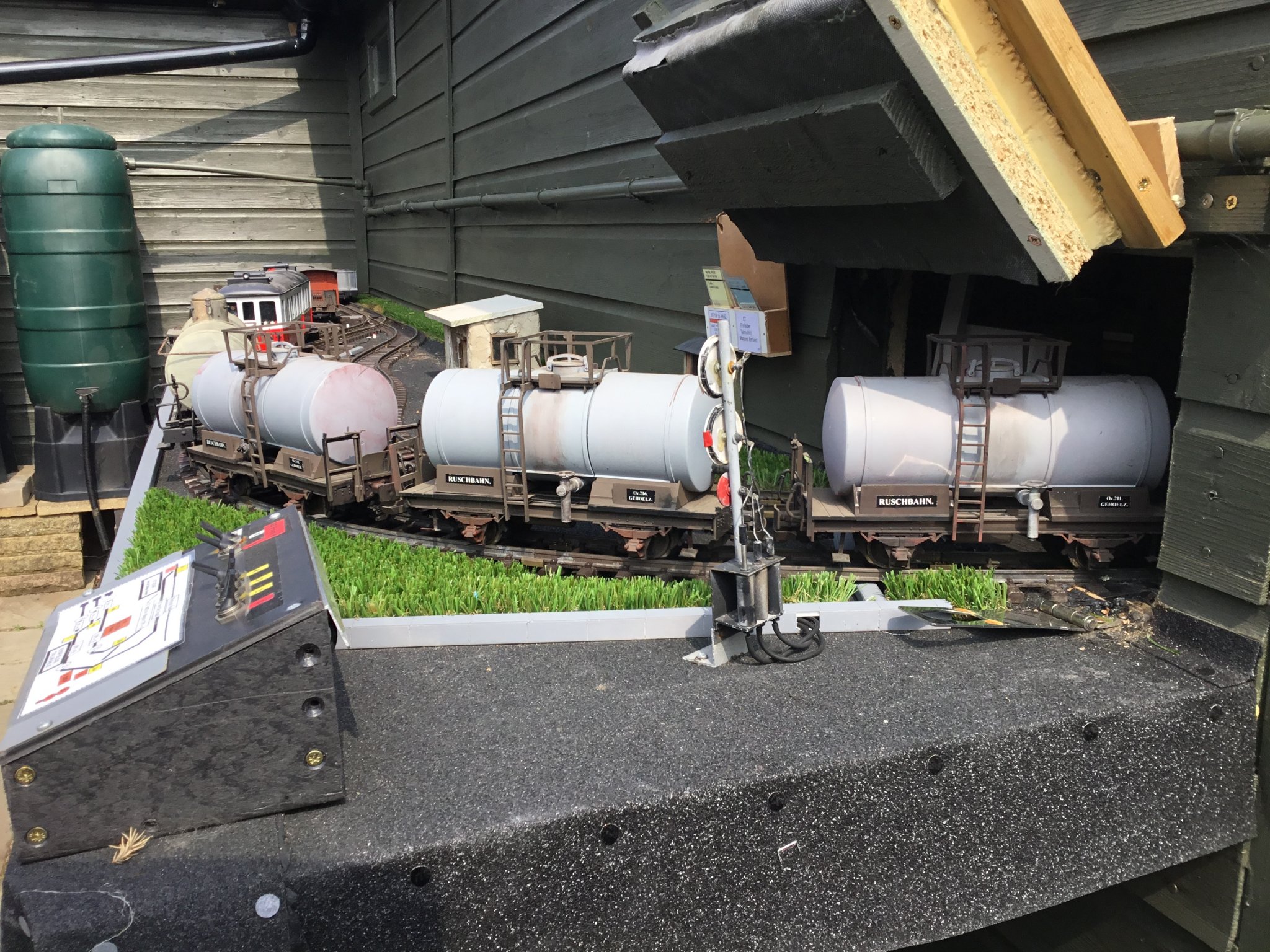 And here it is after works attention, I have recovered the 4 sides with Dark Grey Tile Adhesive. The Windows and doors have had new wooden surrounds. New Roof of Pantiles with all given a Paint Job with some dry brushing to Weather things Down. Location below may be temporary, not sure as I am thinking of a Station Building in part relief somewhere here. 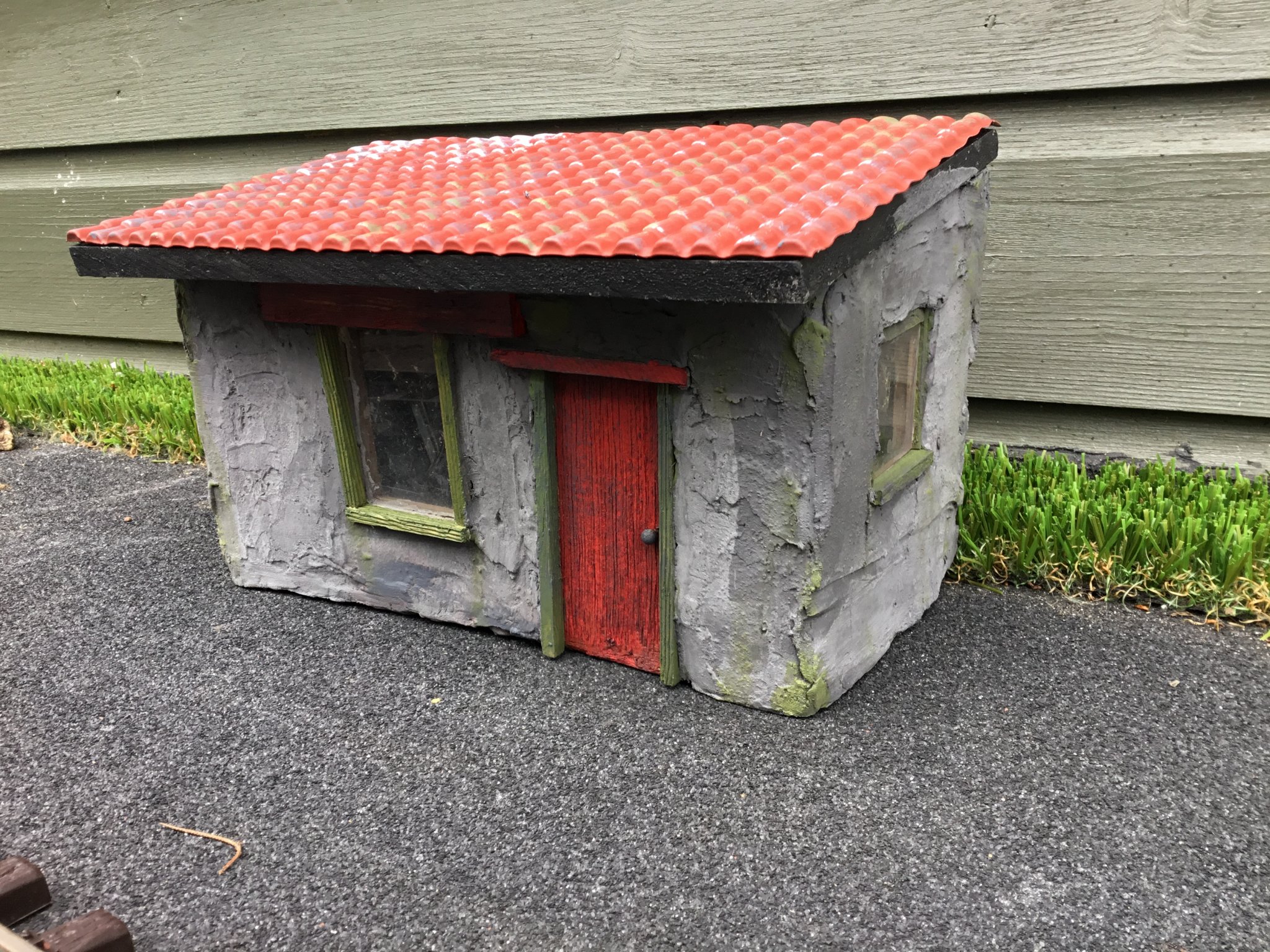 Next up is a House that I got Second Hand at a Show many moons ago. It has been lurking around looking for a home and getting in the way for too long. Also it had gone past the stage of full redemption to its former glories so I decided to make some Relief Fronts out of it. This is the first one in its location after some remedial work and some spare Window Shutters and Boxes added. Bearing in mind that this is East Germany before the Wall came down, make do and mend was a tradition in the bad old East. Hence the differing Shutter sizes and bit of lost wallwork bottom left. 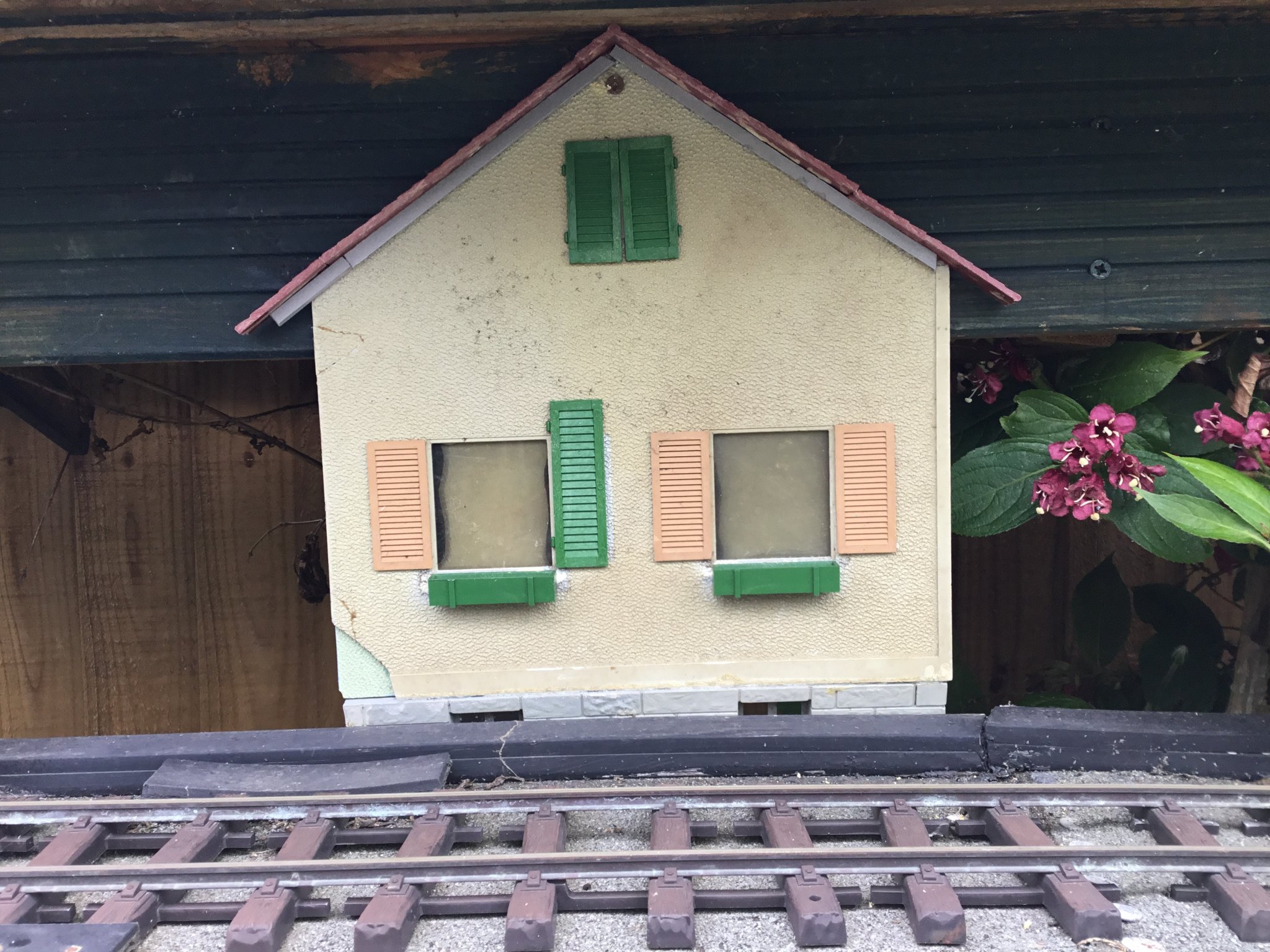 Here it can be seen in context with the nearby Halt behind the Shrub, the House Front suggests some kind of community hereabouts. 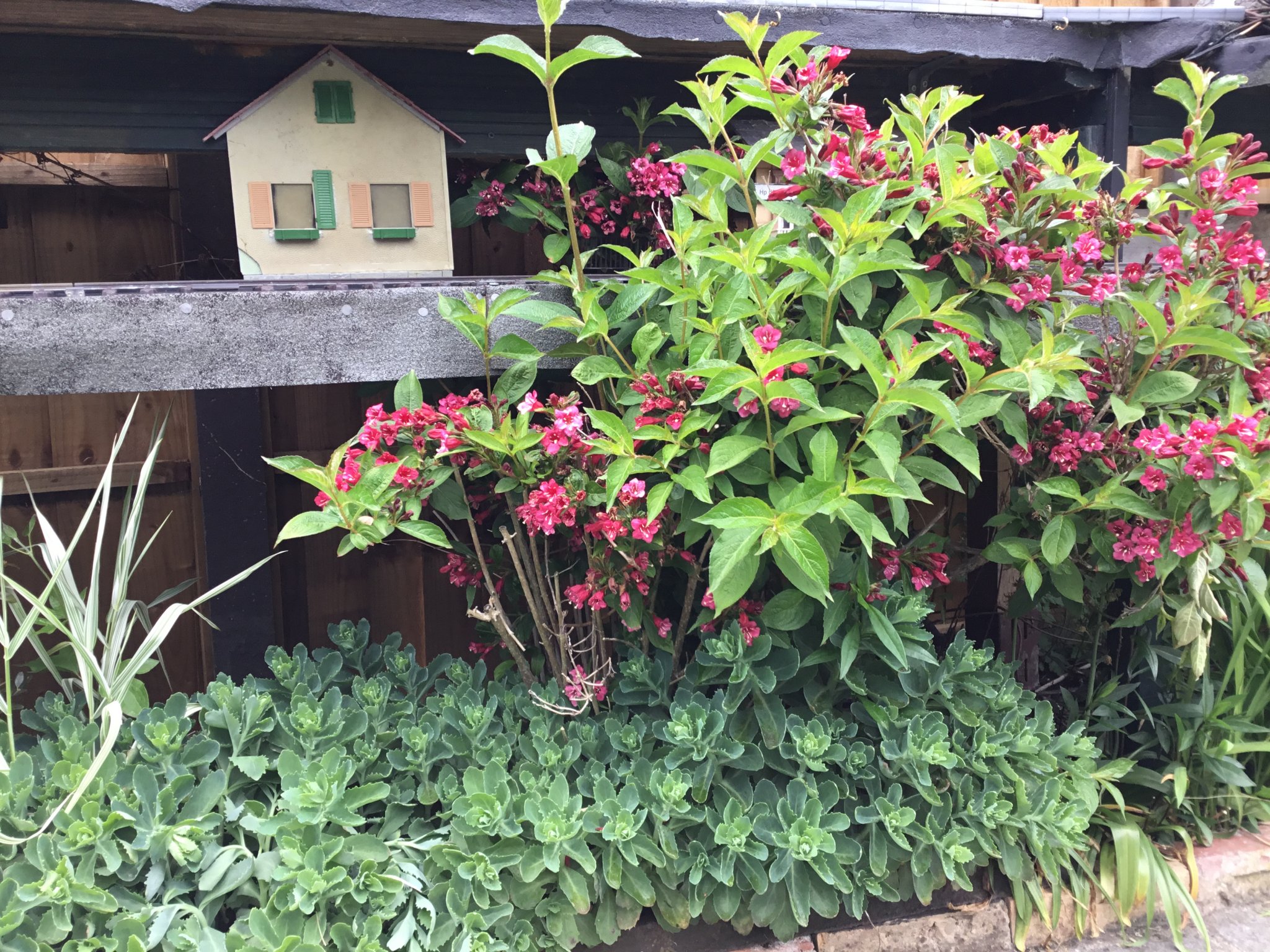 Finally showing how it sits under another Station at a lower level, one has to imagine quite hard in places on my line to see what is being attempted. 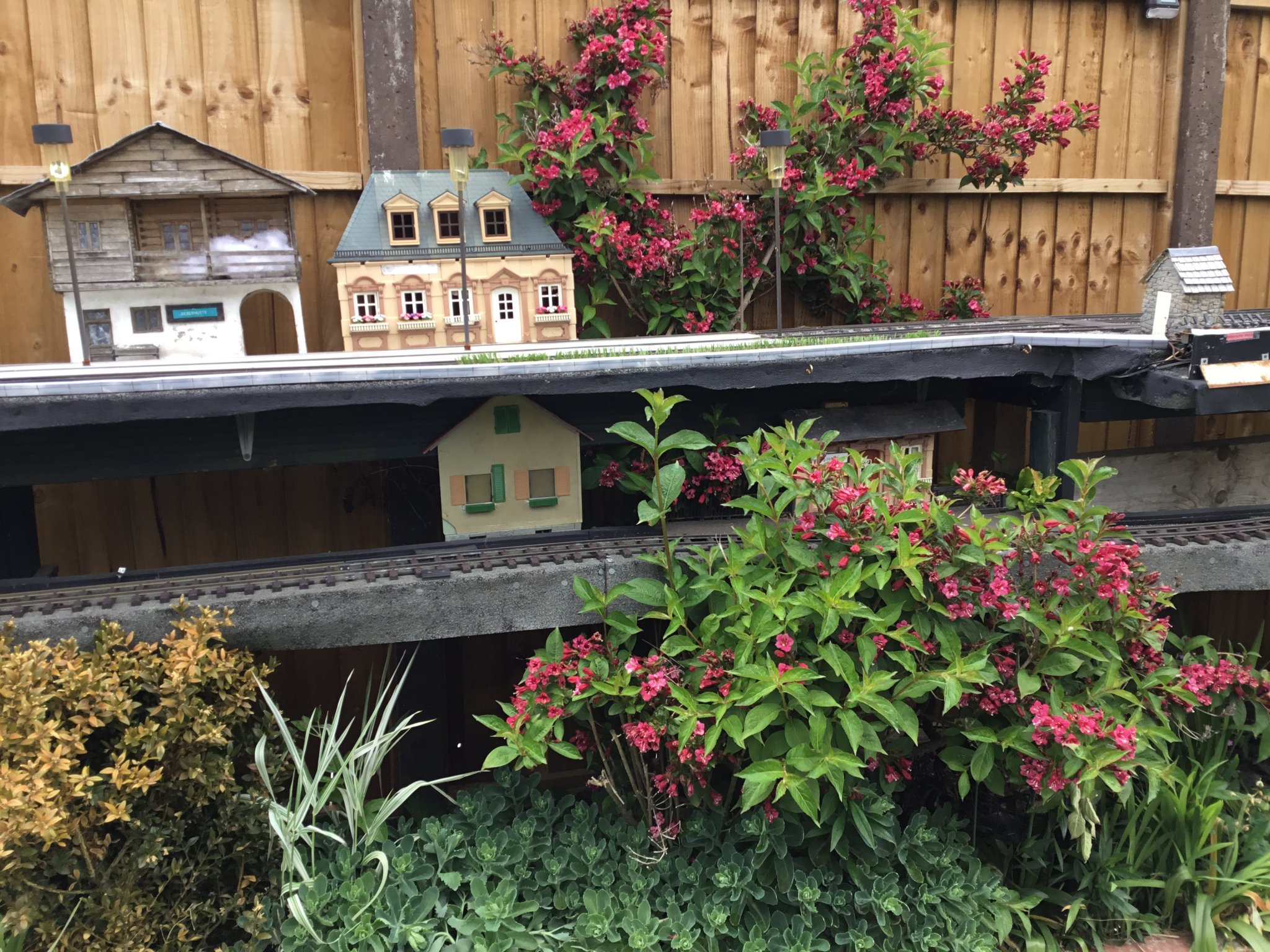 I had done an update the other week when the great meltdown of the Forum lost my post. Will get round to reposting some time soon. But in the meantime a project that has been in longer gestation than that one was. Some years back I tasked a friend of mine to take some Pictures of the building in this post. He returned saying that he could find no Building where I said it was. Hardly surprising as I discovered in 2016 when I visited Alexisbad, the space had been stolen for a Mini Bus Terminal. So there followed extensive searching of Books, Video’s and Websites to find what it looked like in better detail. These are the pics that I had to go on. 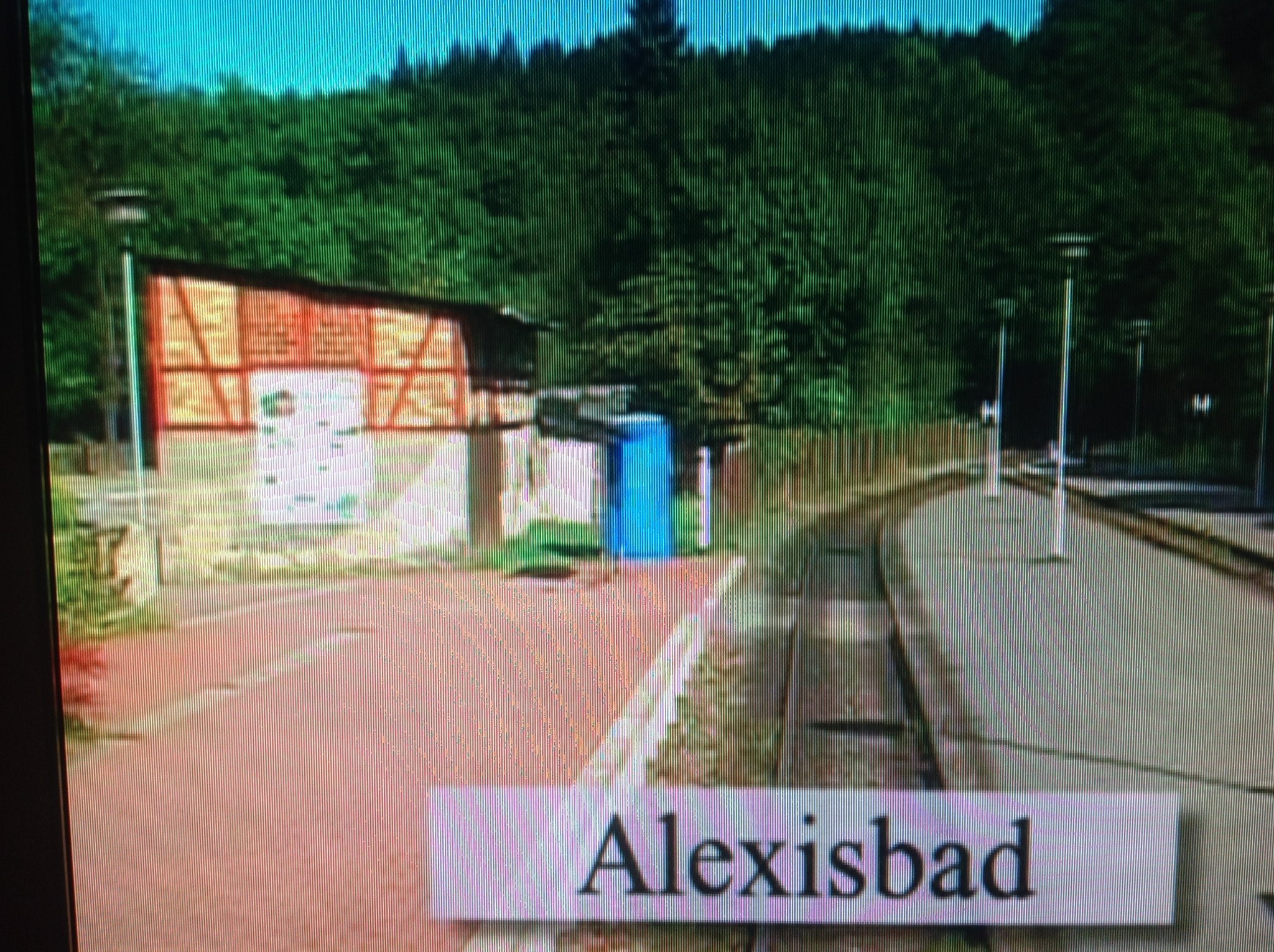 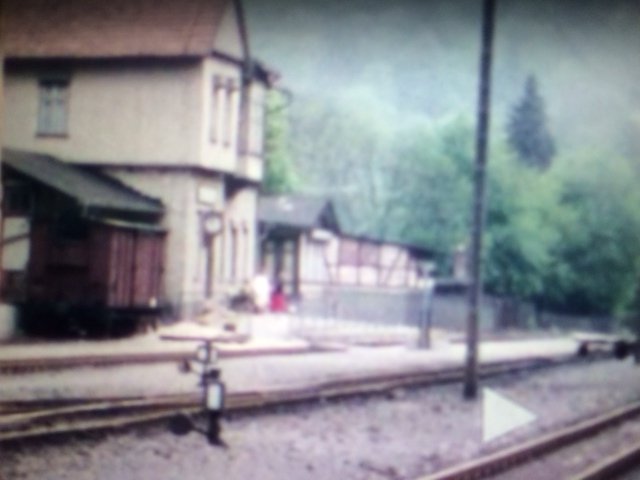 Probably the best is the third image which was screen dump ripped from a DVD in my posetion. I also have a much better image in Black and White from a member of a different Forum but feel that I should not post that. So with some information to go on I prepared a Drawing on my CAD System. 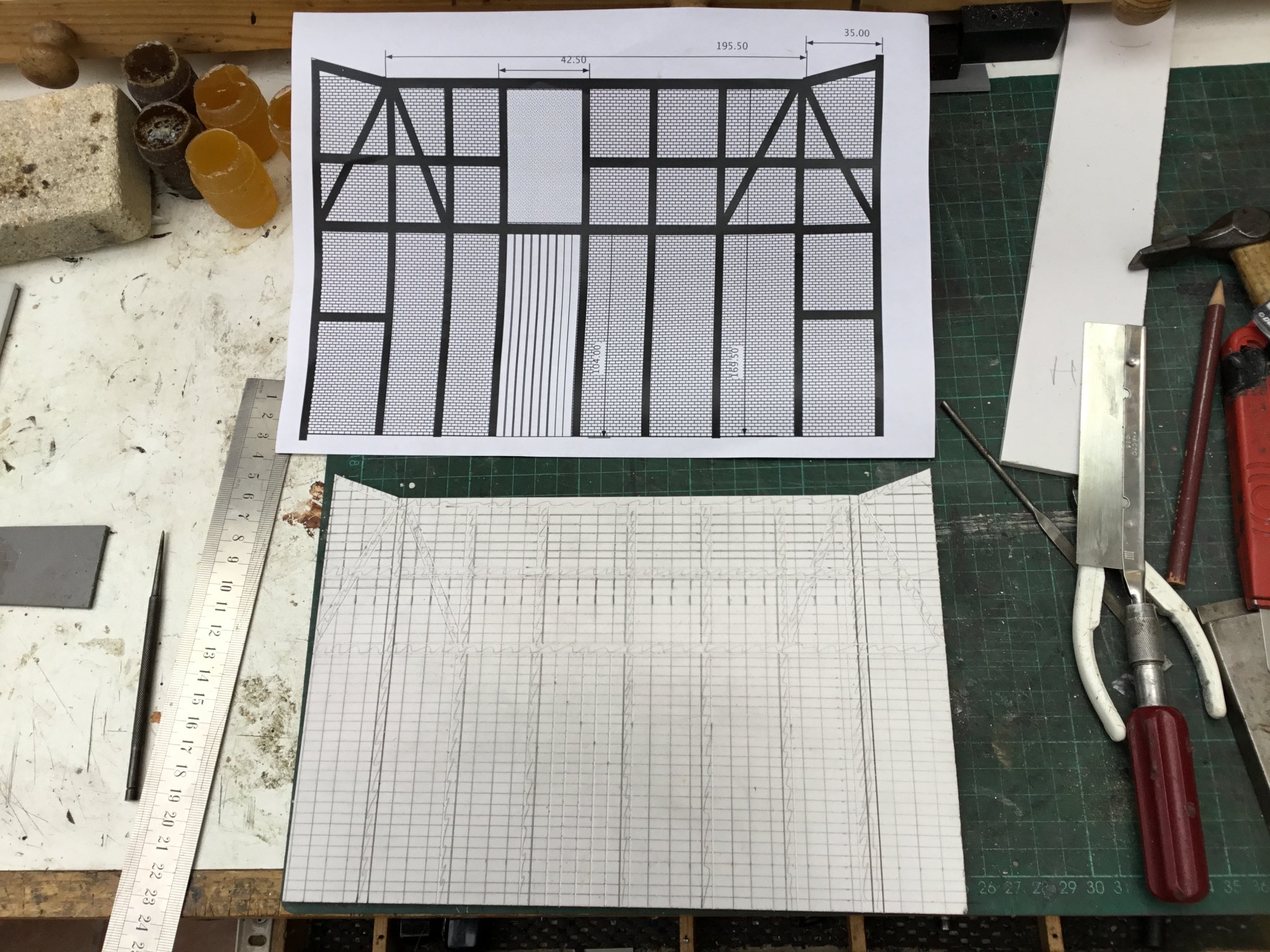 Below that can be seen the start of the Half (well less) Relief Model that would be Built. Doh bottom half is Stone work, so I cut it at the joint around 25% from the top. This proved fortunate as when Spraying I could Rattle Can the Top bit Red Undercoat and the Bottom bit Grey Undercoat. However scribing the Stonework is a much more protracted process than Brick as my slightly Arthritic Fingers complain after 20 or so minutes. HIPS has been used for this Building as is my Standard for Indoor Buildings and those that live in the Garden in perpetual shade. But all was finally completed and the two bits joined with lots of strengthening. You can see all the part done and wasted Brickwork Scoring here as well. Double Doh. 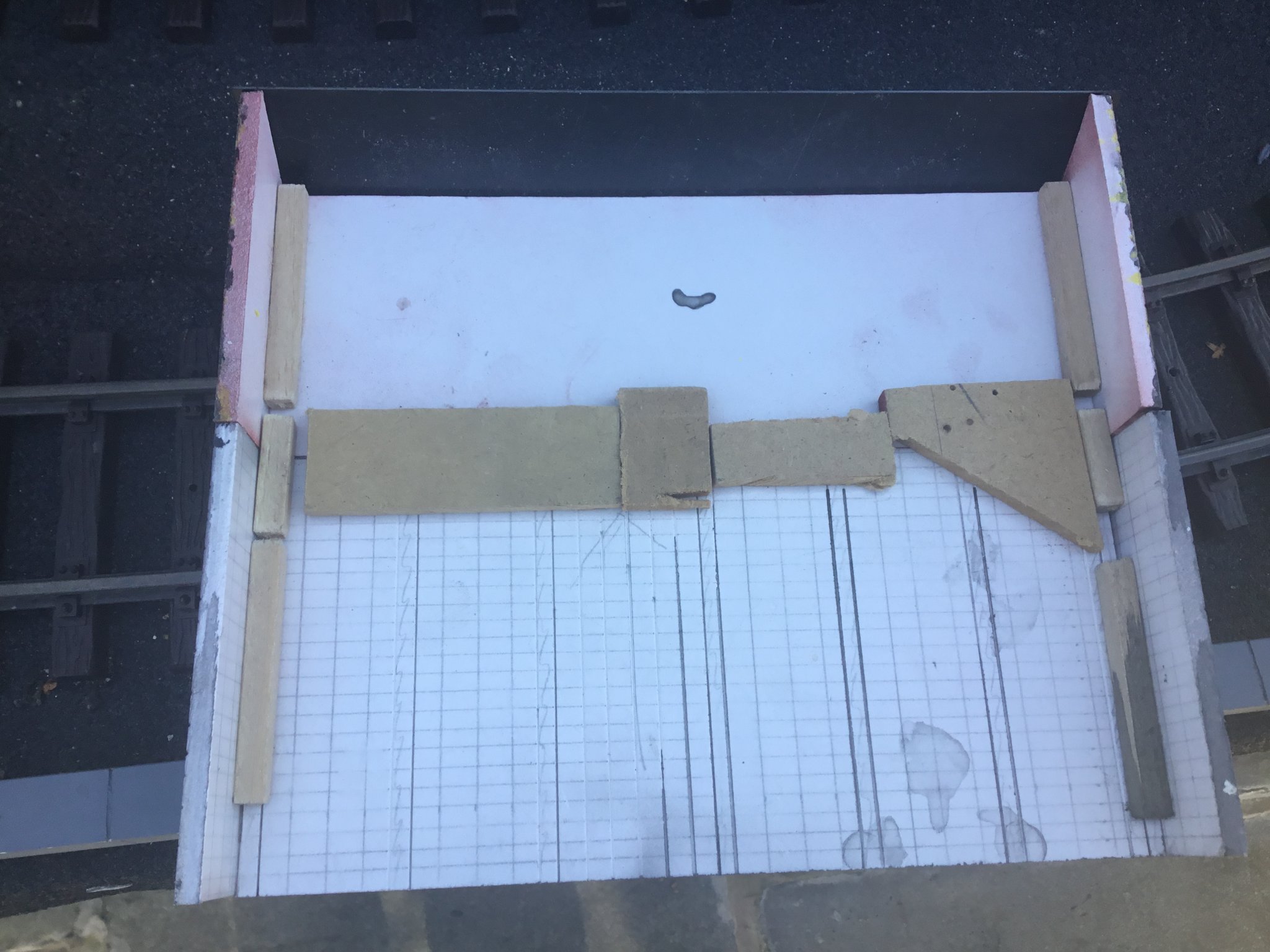 Finally the Building was Painted up for detail, Brickwork a yellowish colour, Woodwork Brown with that Light Grey finish that untreated Wood gains after years of abuse. Though the pictures all show the Woodwork as Brown this will be well after unification of East Germany when things started to get Painted again. Stonework picked out with darker blocks and all weathered with dry and sloppy thing paint techniques. 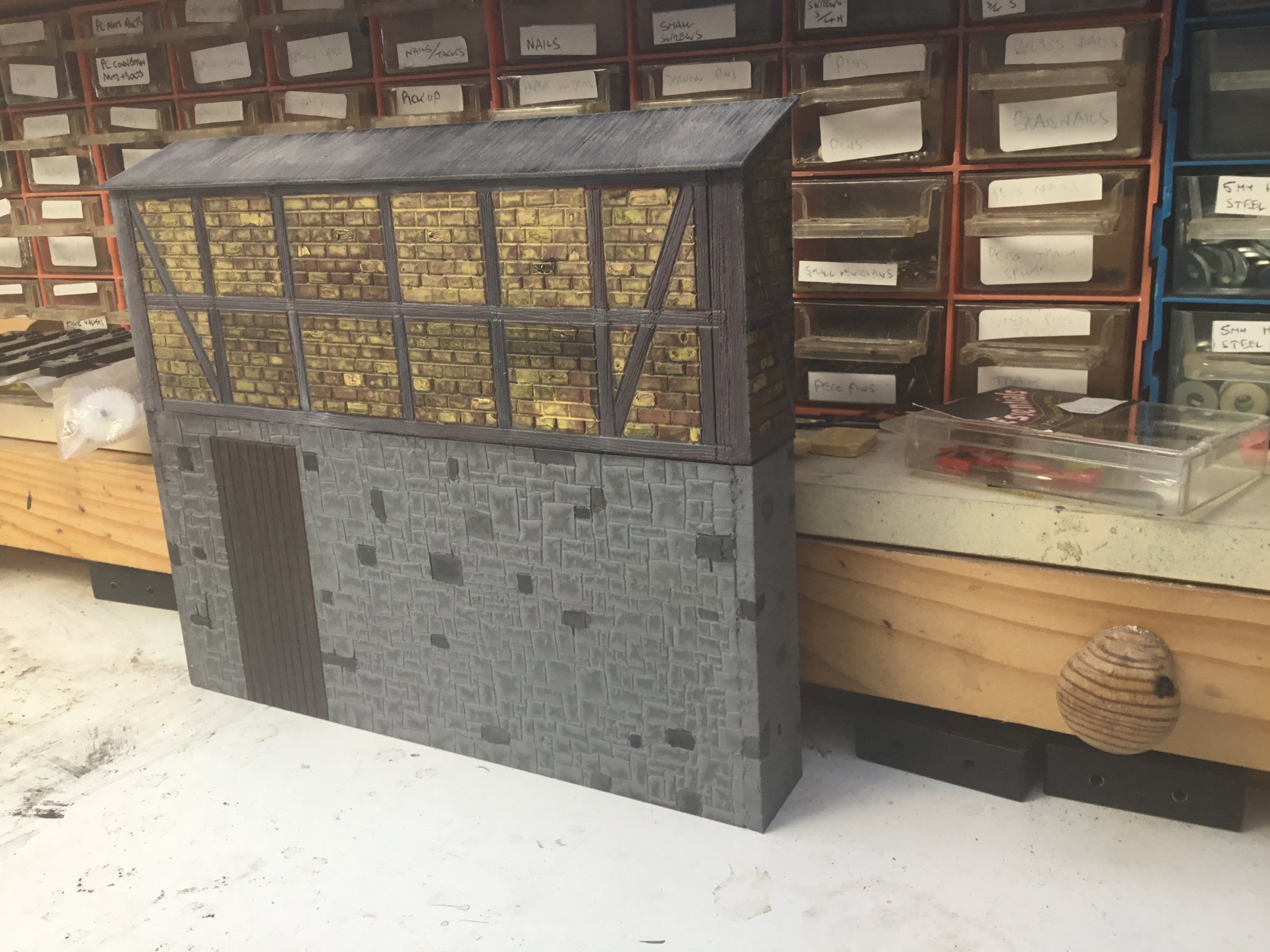 And here it is roughly where it would have been at the real Alexisbad. Probably more hidden by Tree Growth than it ever was. 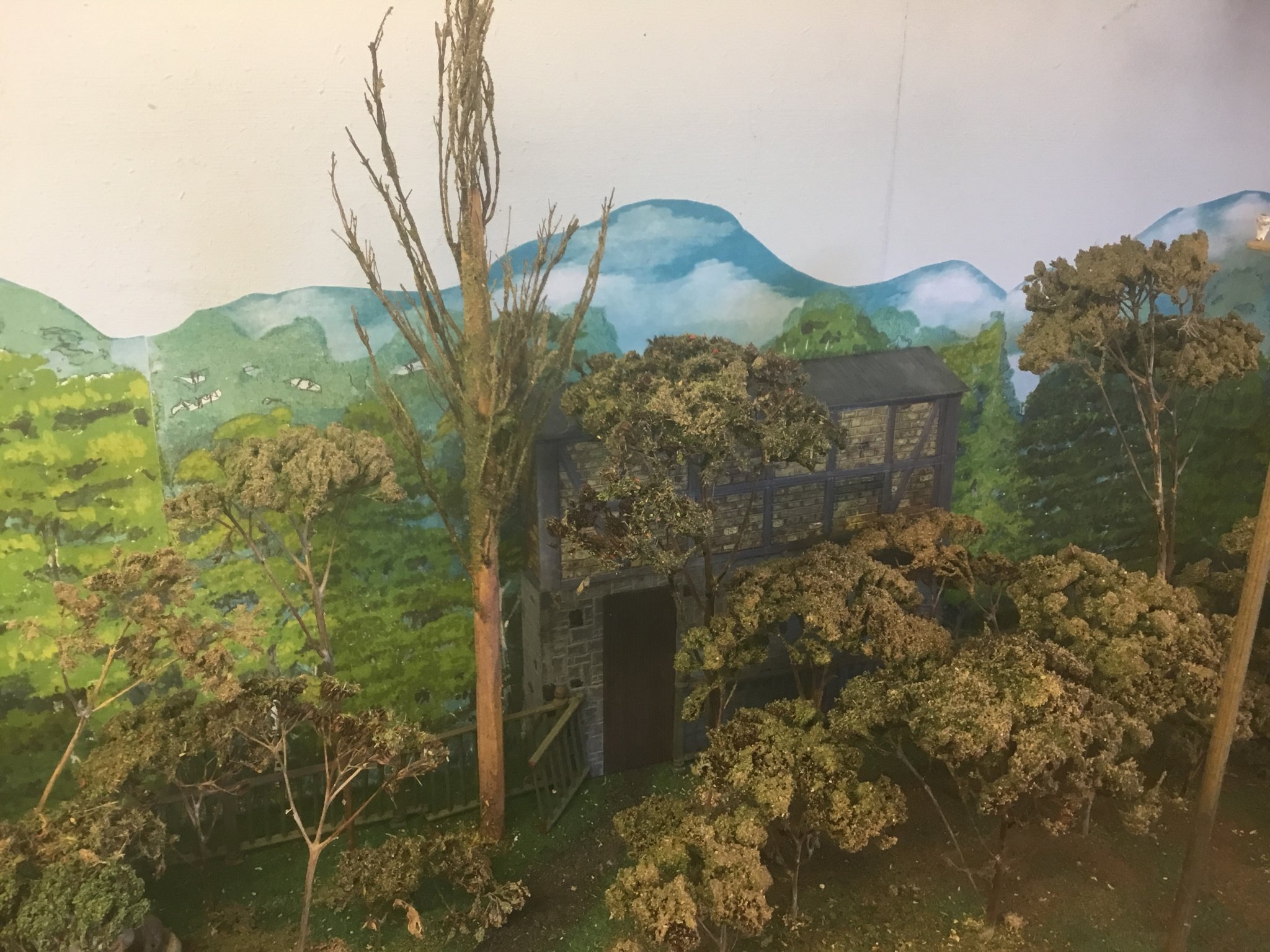 Some times one wonders if the effort is worth the time taken to achieve such a small feature. But it satisfies me to know that another of the Puzzles that are Alexisbad in 1981 has been achieved. Would that I had taken more interest and Pictures back in February 1981.
Expand signature
JonD Dunnyrail East German Harz NG circa 1981 in Cambs. Link to my Railway Build A new Railway is Started - G Scale Central Dated vid of trip on my line mihi necesse est optimus

My latest mini project has been to do alternative Station Names and Signs for my Railway in the Shed. Have had a friend Round this week and though we managed some good running in the Garden Tuesday and Today, Wednesday was a different matter altogether. So we ran in the Shed which I have long had a French Timetable for. A small sort of Fiddle Yard exists that normally acts as (Alexisbad Carriage Sidings) has the Line that goes to the Great Outdoors that nicely holds 2 Pignosed Railcars and a Van. The other Road holds 3-4 Wagons a Bogie Coach and a Corpet, more than enough for a back woods French Light/Narrow Gauge Railway. For each Location I have removed the German Names, mounted them on Plasticard with Magnetic Tape. I also made new French Station Names the same. I also made up small flats of Tinplate on each Location that the revised and original plates can sit on. My through Station (Alexisbad) has a line that goes out of the other end of the Shed, this nicely holds a Pignose and a Van, the Van lives here for the Start of the Timetable. The Terminus (Harzegerode) works well also. Sundry but not too many Wagons are distributed and moved around by both the Railcar and the one Mixed each way. So now I have a French and German Railway that I can run happily in the Shed all weathers.

Fiddle Yard at the start of the session. Anemasse (Alexisbad Carriage Siding). 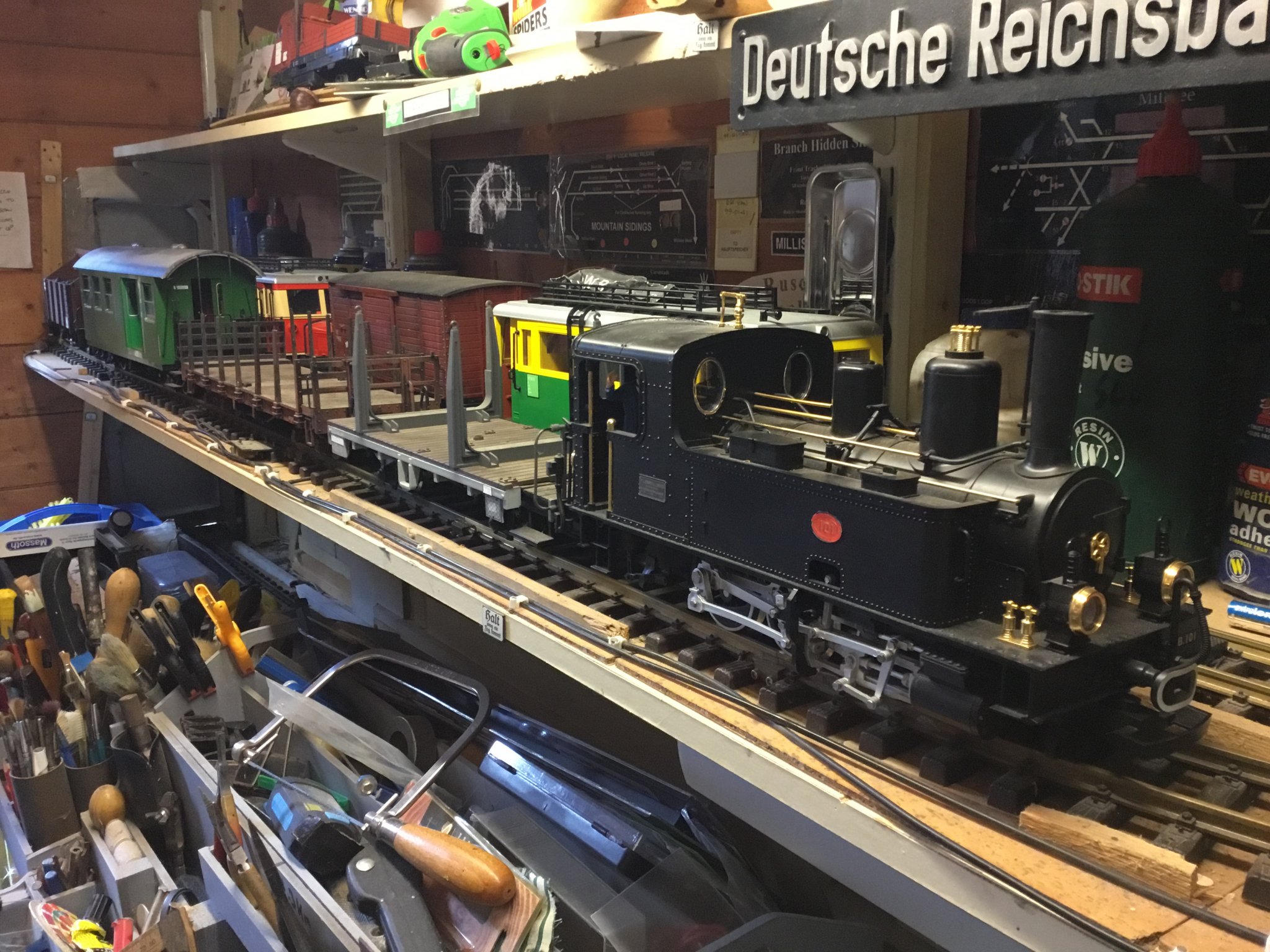 Mixed and both Railcars at Bonne (Alexisbad), busy part of the day, the Station soon returns to a sleepy existence with the Chef du Gare enjoying Wine in the Cafe du Gare. 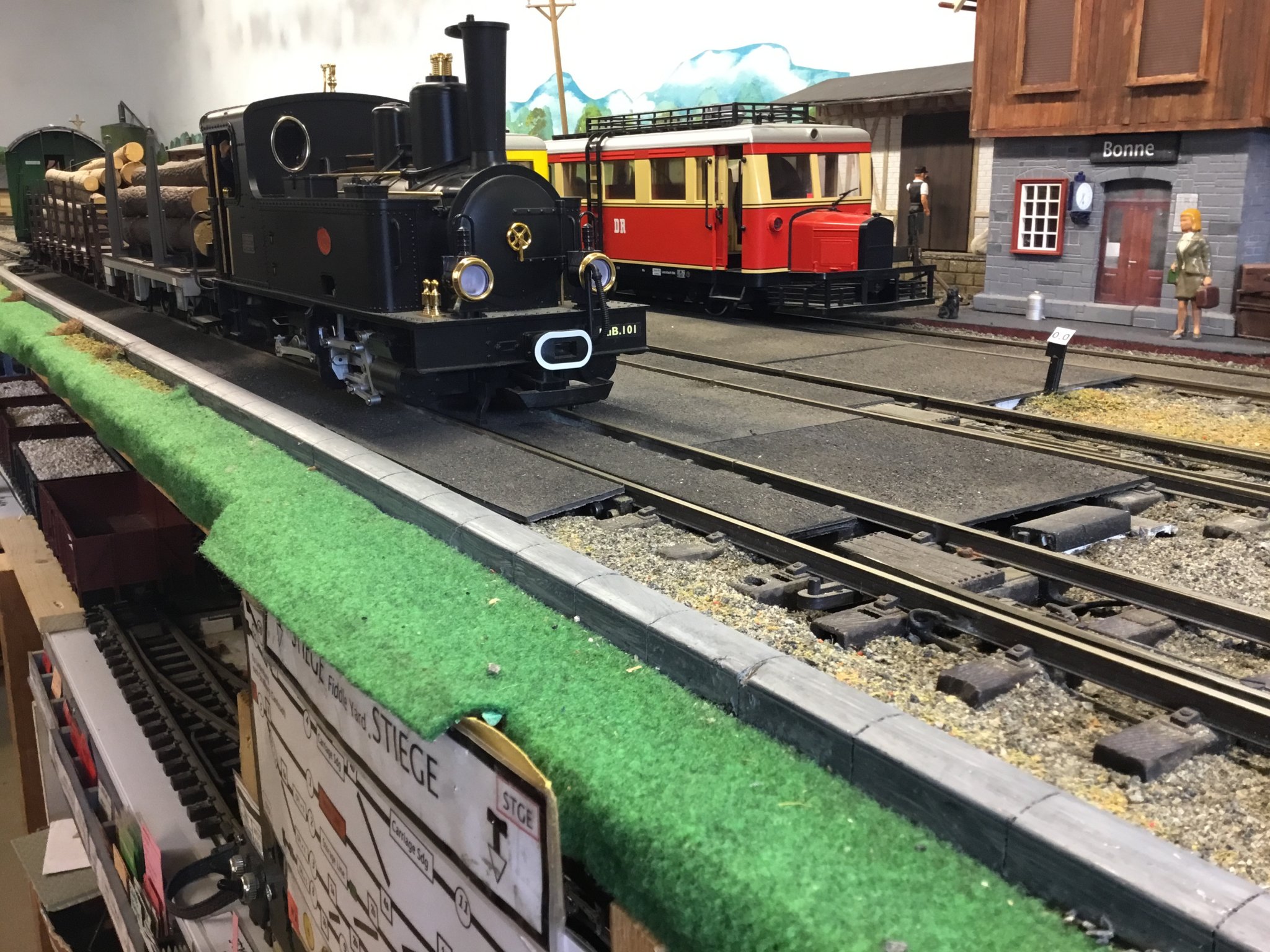 Note that the Station has been renamed as has the Buffet. 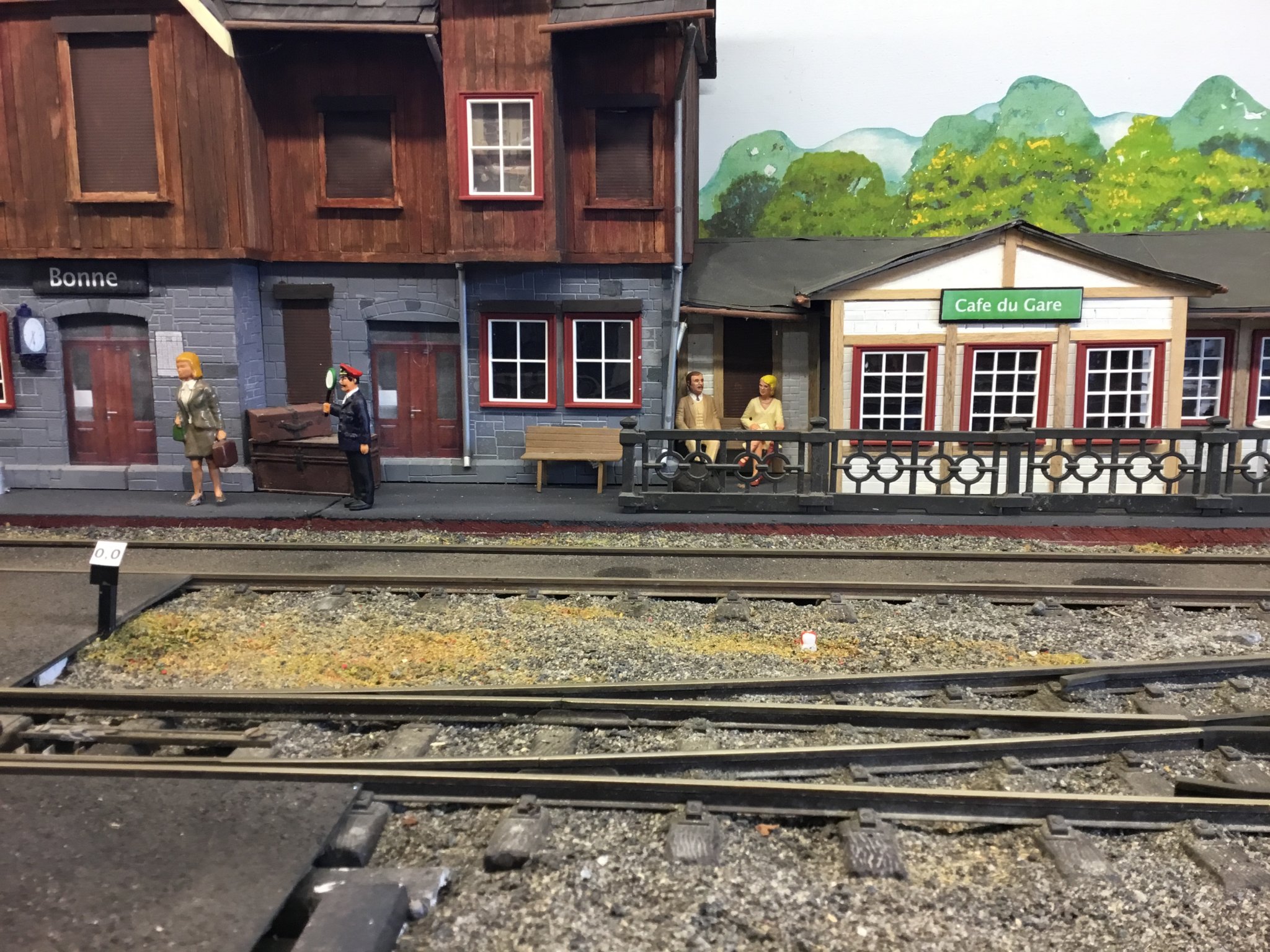 This is Sammeens just an imaginary location at the exit of the Shed. Works fine for just a Railcar and a Van. 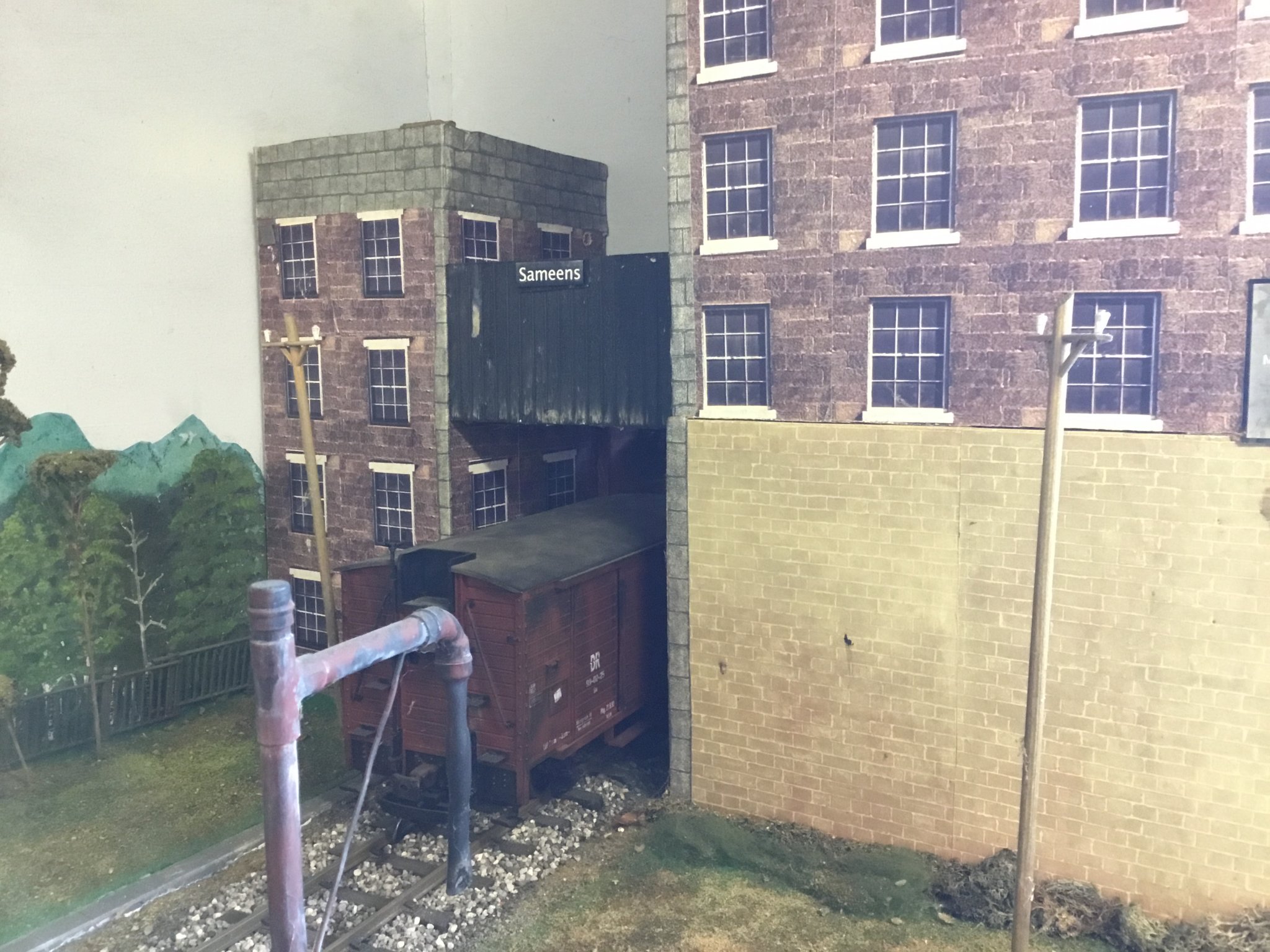 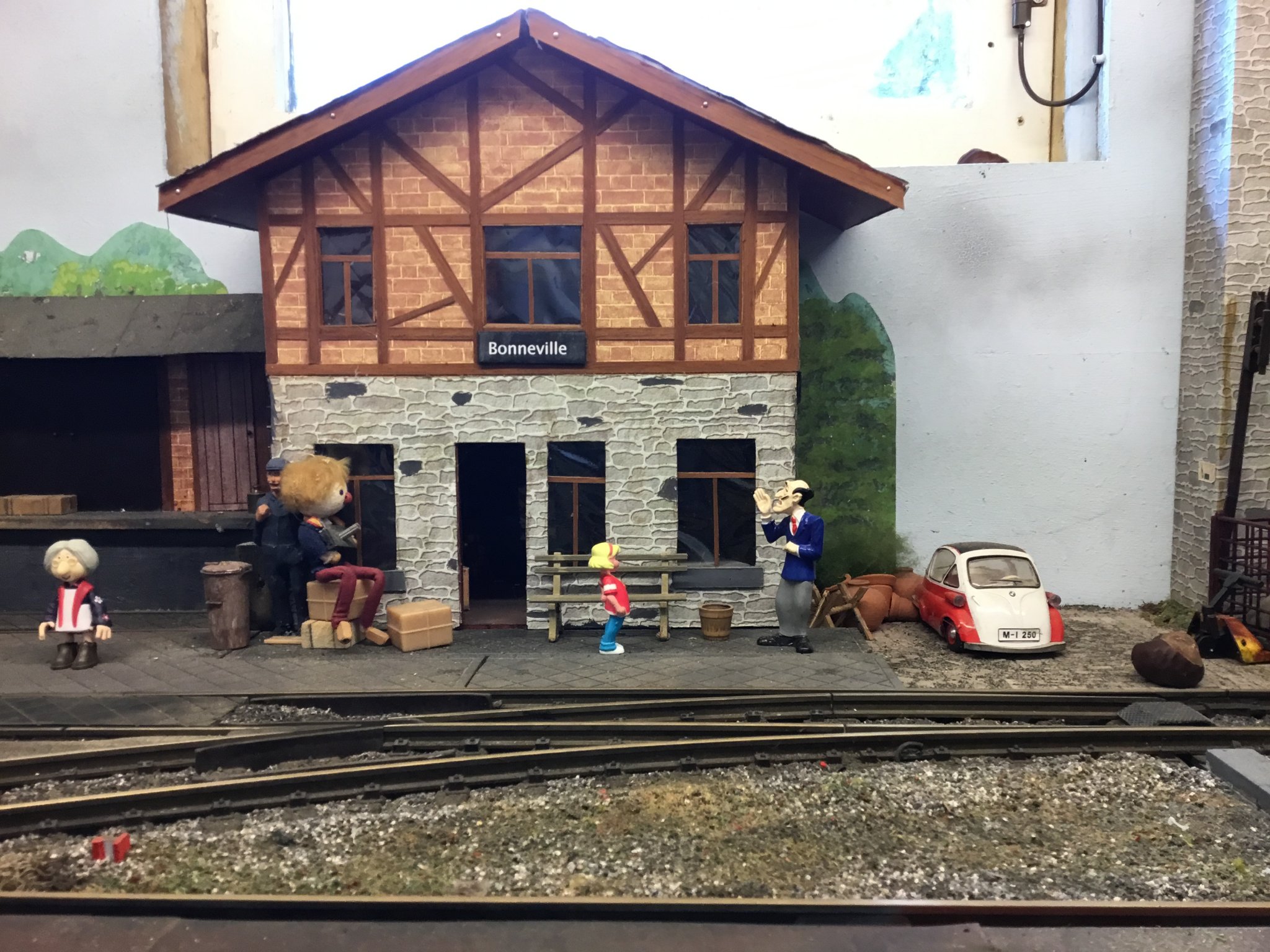 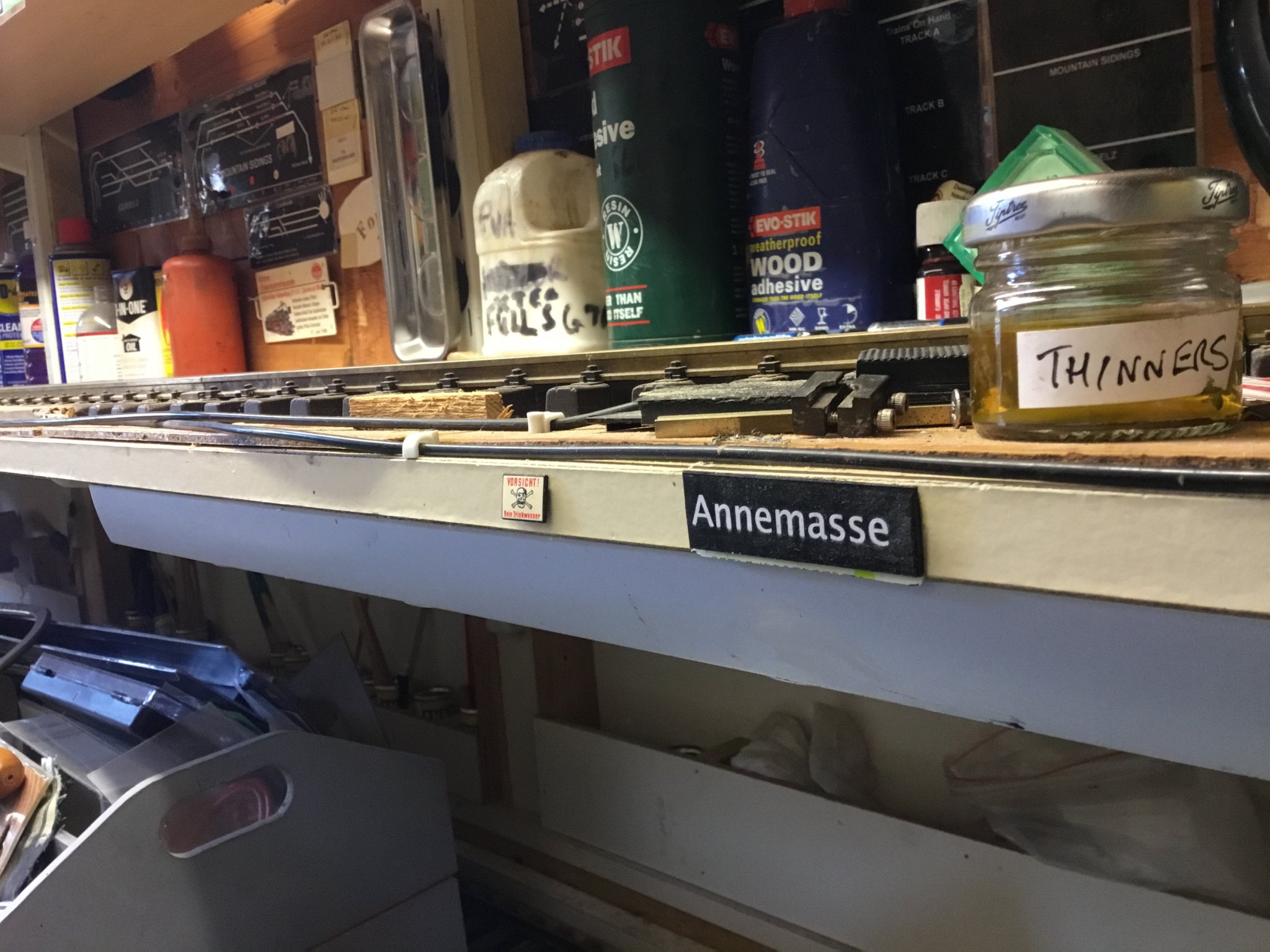 Here is where the German Names live while running as the French Line. 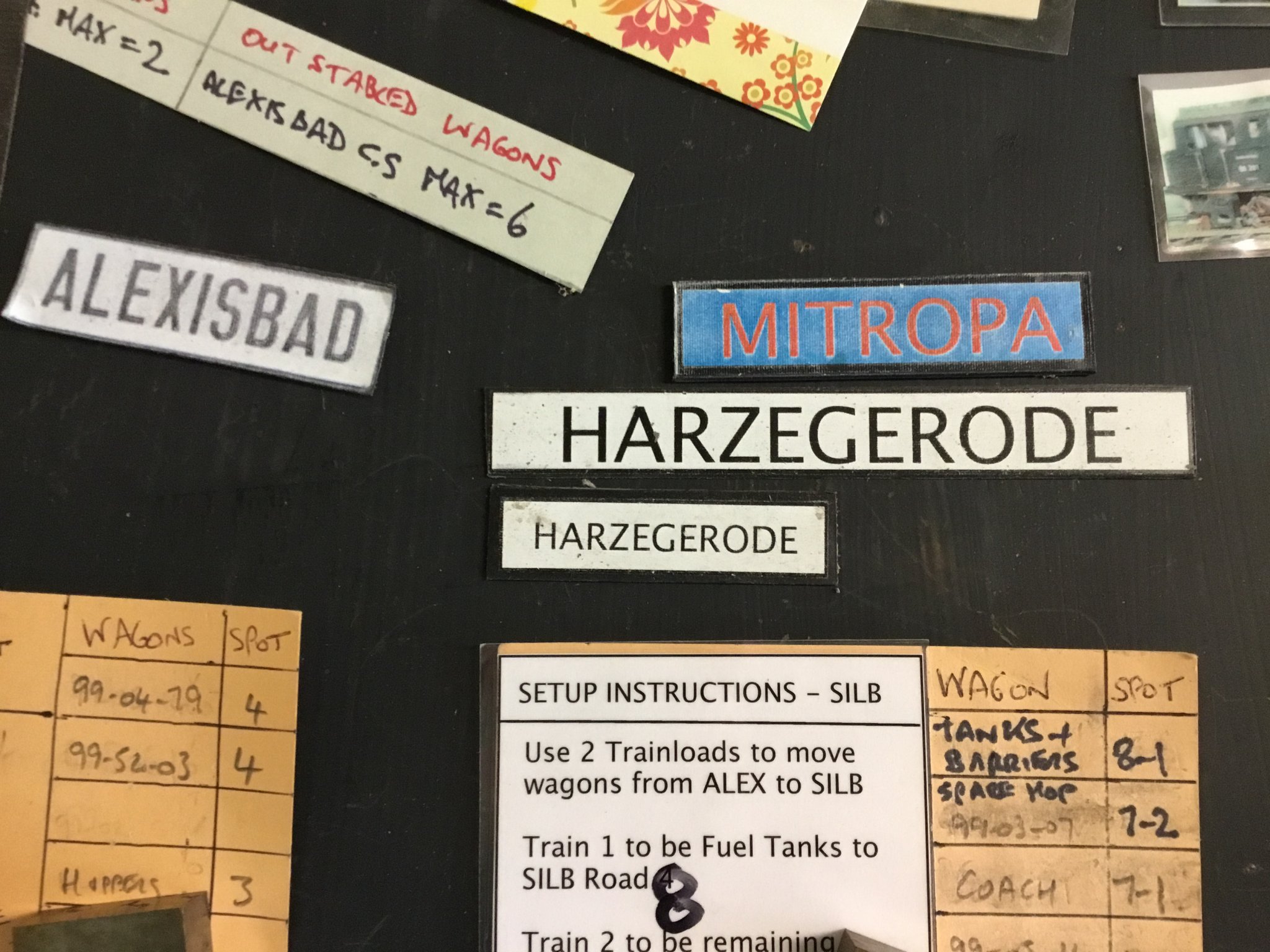 This is something that I did on my old line at Hemel Hempstead, but all the Stations moved from East Germany to Ireland as Stations on the Lough Swilly Railway.
Expand signature
JonD Dunnyrail East German Harz NG circa 1981 in Cambs. Link to my Railway Build A new Railway is Started - G Scale Central Dated vid of trip on my line mihi necesse est optimus
Show hidden low quality content
You must log in or register to reply here.
Share:
Facebook Twitter Reddit Pinterest Tumblr WhatsApp Email Link
Top Bottom